About a month ago, I went over to a cousin’s house and noticed for the first time that he had a small hookah on a side table in his sitting room. It made me feel less self-conscious about mentioning that I was soon going to review the Ascent Vaporizer by DaVinci. You would think that things like this shouldn’t matter, but we live in West Texas; appearances are everything, and everyone likes to judge.

Saying that you’ve visited a hookah bar in NYC to a guy without a clue seems to invoke images of clandestine visits to sepia colored opium dens in the Far East, and mentioning that you own a vaporizer is akin to admitting that you have a subscription to High Times … not that there’s anything wrong with that. My point is, of course — that warranted or not — owning certain “paraphernalia” in the area where I live invites people to jump to certain conclusions, and that’s a shame.

Recently, my friend Grabb — who is like a brother to me (and a former sheriff’s deputy) — returned a piece of Rubbermaid he’d borrowed. It wasn’t until after he had left that I realized he hadn’t said a word about the dismantled vaporizer that was lying on a paper towel by the sink. That’s “don’t ask don’t tell” in action for you right there, folks, but he needn’t have worried. 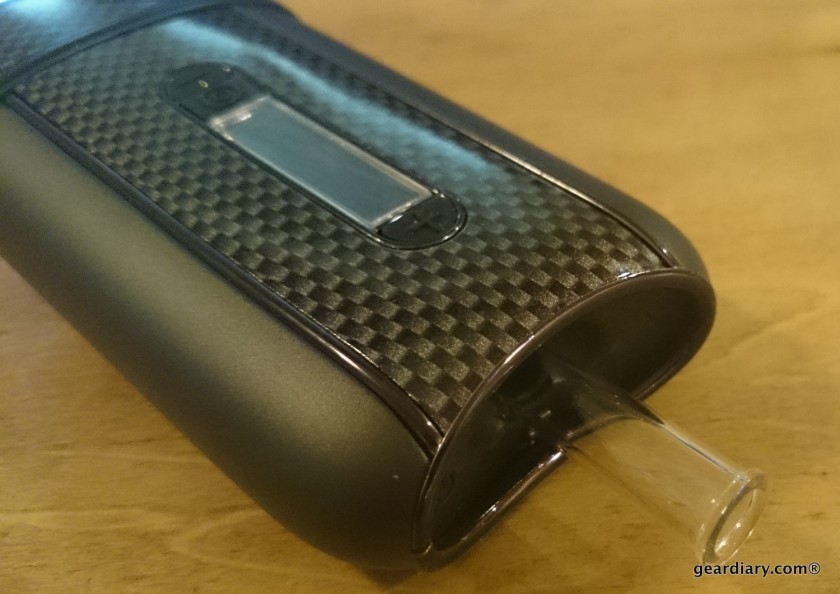 If I lived in Colorado or Washington, or any of the other states that recognize the use of certain legal medical and/or recreational substances, there might have been a question about what was being vaporized in my DaVinci, but I do not. Instead, I have been experimenting with the 12 Aromatic Dry Blends Sample Package sold on VapeWorld, which includes:

The temperatures shown next to the blends are the optimal temperatures for smoking, or “vaping” them. I am a relative n00b to this whole vaping experience, so I am sure I am going to use the wrong terms more than once, and if I don’t cause at least one person’s eyes to roll at least twice because of my inexperience, then I will consider this review an abysmal failure. We’ll get back to that in a moment, but first, let’s get back to the DaVinci and why anyone might want to spend $249.99 on a vaporizer bundle in the first place!

Unboxing the Ascent Vaporizer by DaVinci is a similar experience to that of unboxing some of the higher end mobile phones I’ve reviewed; everything is top-notch. The various accessories are tucked away into specific compartments and drawers, and there are spares and extras, too — as there should be. 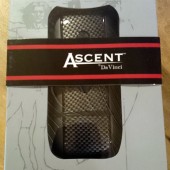 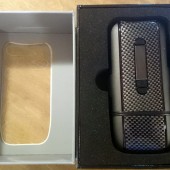 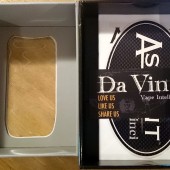 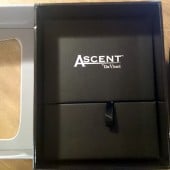 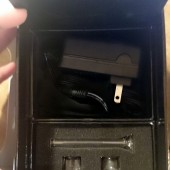 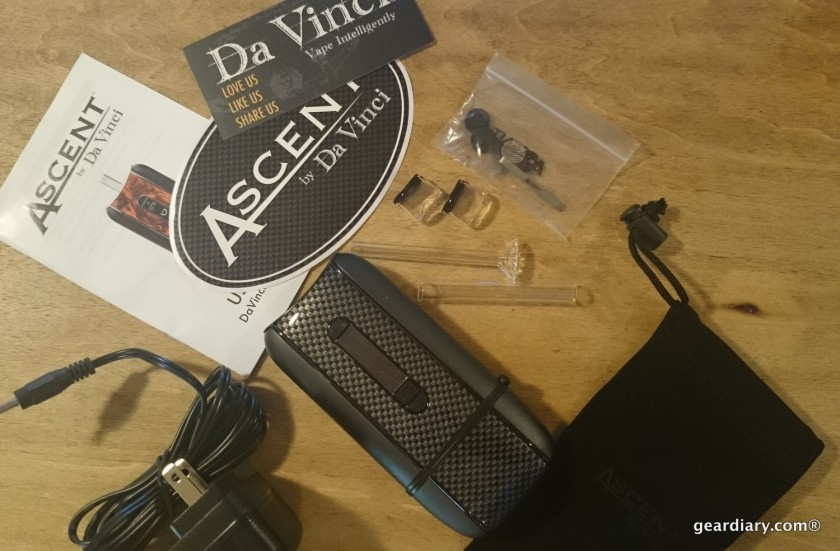 The full-size DaVinci comes in several finishes: stealth (solid black), burl wood, (faux) croc skin (it is leather, though), black skulls, and carbon fiber; I was sent the carbon fiber model. It’s my favorite, and I think it looks pretty striking. 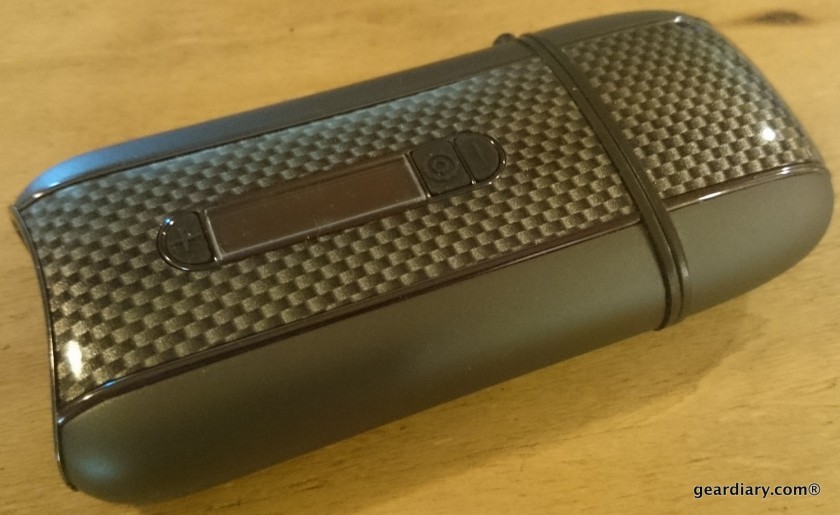 The Ascent Vaporizer has a very solid feel; it measures approximately 4.6″ long x 2.25″ wide x 1″ thick, and it weighs 6.7 ounces. It is composed of what looks to be anodized aluminum, trimmed in carbon fiber, and it has smooth rounded edges that feel good in hand. The Vertu comparison that I made earlier was very warranted; the Ascent has some weight to it, it is solid, and it not only feels and looks expensive — it is expensive.

Best I can tell, the top end, where the glass mouthpiece sits, is largely composed of recessed silicone. There is a power button on the left, a glass straw that can be extended in the center, and a metal pick that can be removed as needed under the straw. 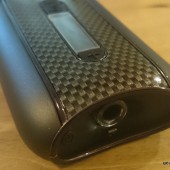 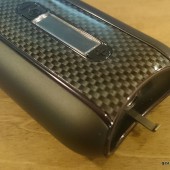 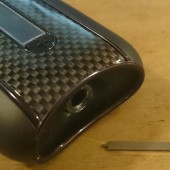 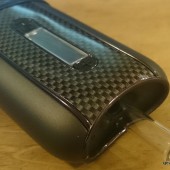 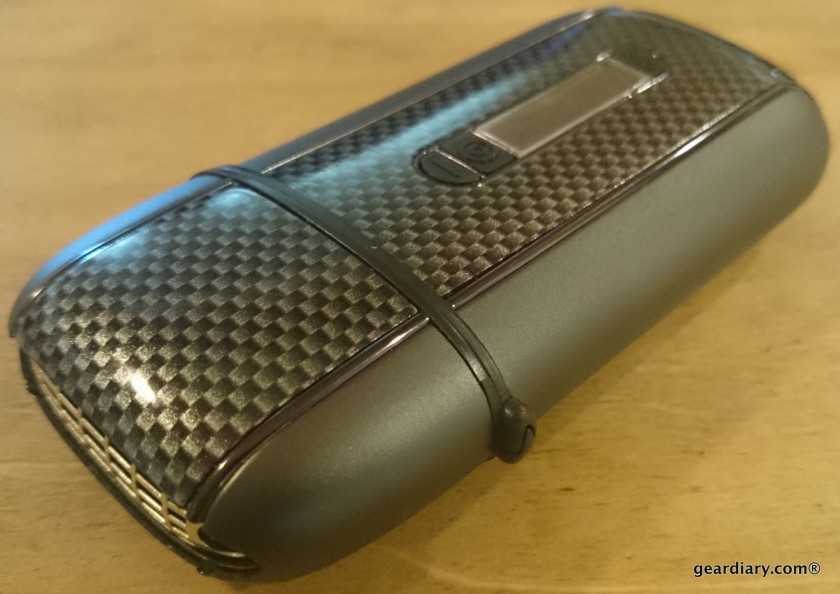 The bottom of the Ascent resembles the grille on an automobile, and one thing I have noticed is that it can serve as a type of exhaust. It will allow a bit of vapor to escape. When I’ve loaded the ceramic bowl with various herbs from my assortment pack, and I’ve enjoyed some of the indescribably delicious (albeit faint) escaping smells, someone who prefers to be a bit more discreet might not find this to be a selling point. The end does get warm when the vaporizer is heating, and it is a pleasant warmth — much the way holding your hands around a warm tea cup is.

According to the Ascent’s manual, the “ceramic heating element creates long wave infrared heating, allowing heat to deeply penetrate the center of the chamber and infiltrate any substance evenly.” They say that what this means for users is the “catalyzation of more active ingredients and cleaner vapor.” 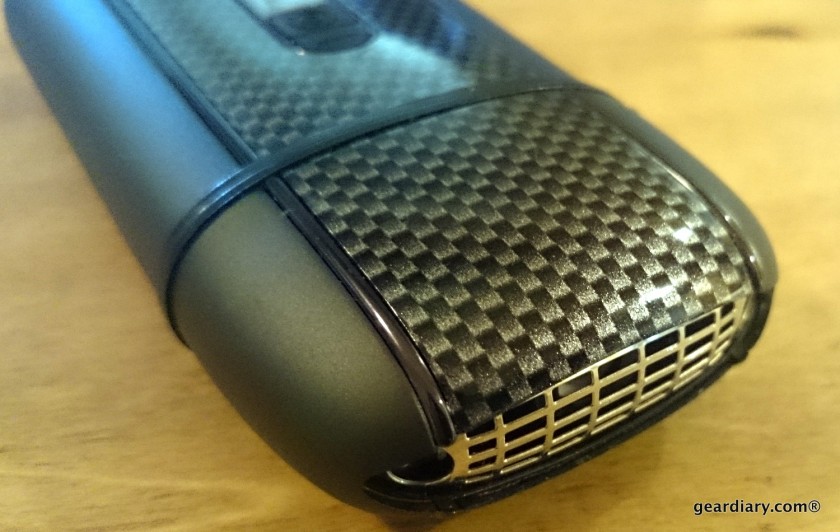 The Ascent is charged by inserting the AC charger into the port on the bottom left; DaVinci says the initial charge should be for 10 hours, and that subsequent charges from empty should be for about five hours each. The battery is supposed to last for at least three hours before needing recharging; that seems about right. Like a cellphone, you can use the Ascent while it’s charging; file that away under things you might need to know later.

Filling the bowl can be a bit awkward; the bottom of the Ascent Vaporizer by DaVinci is slightly rounded, not flat, so you have to hold it with one hand while you fill it with the other. If you are going to be vaping larger herbs like lavender or damiana (which are both lovely and aromatic, by the way), you might not need to bother with putting a screen in the bottom of the ceramic bowl, but just about every other herb will probably need it. 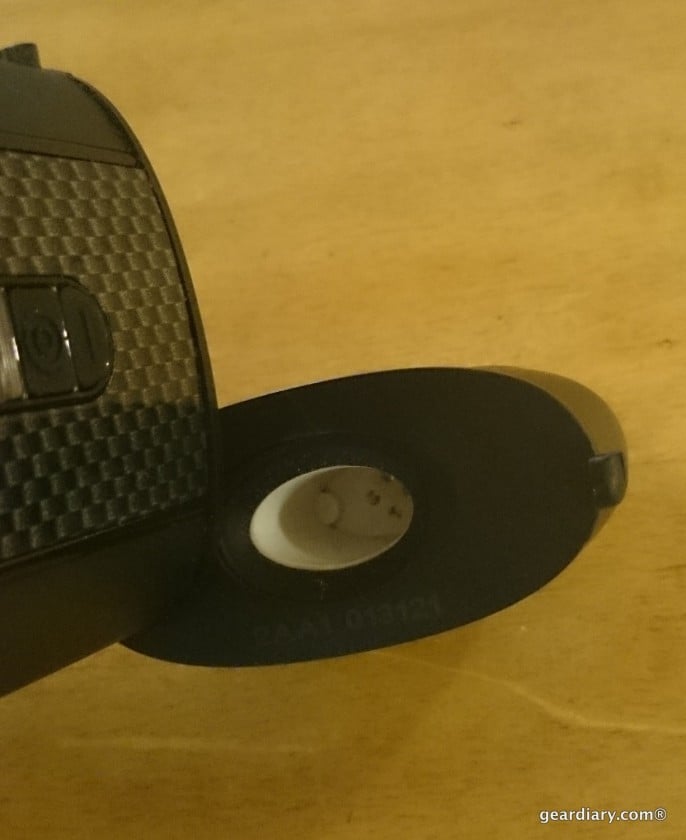 You can also vape essential oils by putting one of the little included glass tubs into the ceramic bowl. You don’t want to put oil directly into the ceramic bowl because it will leak right out of the bottom (messy!). You can vape without using the silicone stopper in the top of the glass jar, but I am not sure why you would want to; if you lay the Ascent down, the oil will spill. 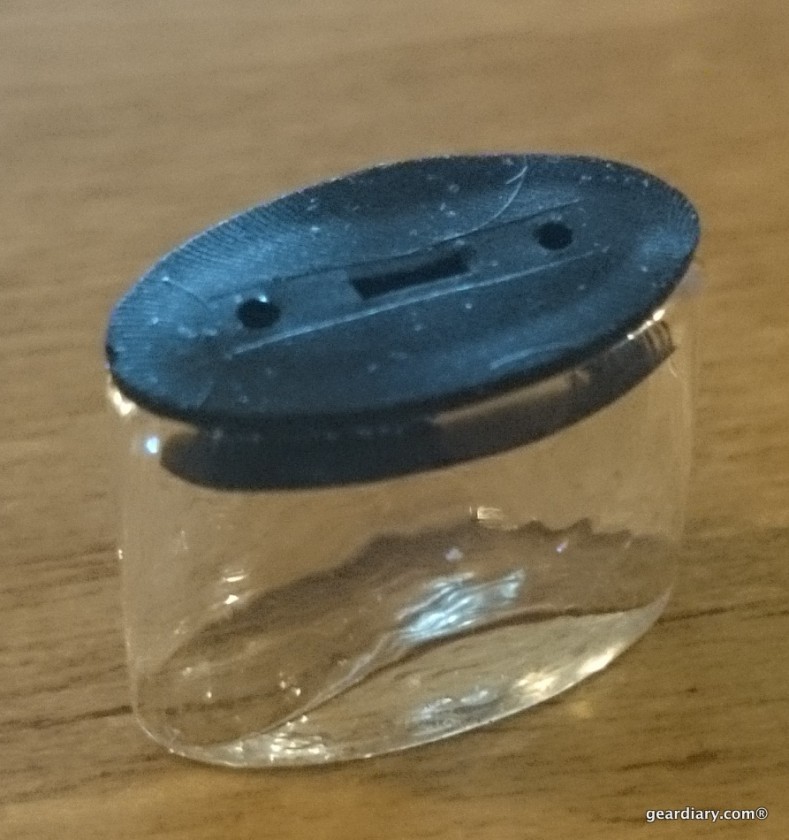 Oils sound like a lot of trouble; I didn’t have any to try, so I can’t tell you much about them, other than the instructions say to fill the glass jar about a quarter full and then set your temperature accordingly before vaping away. 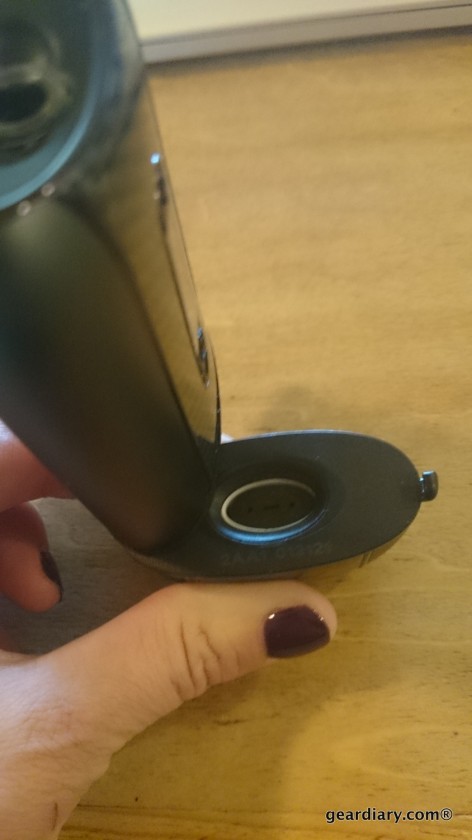 The Ascent Vaporizer by DaVinci can heat from 38º to 430º quickly; after loading your chosen herbs, you press the plus button until the desired temperature is shown, and it will be reached within just a few seconds. You can turn the bowl’s heat on or off to save battery life, and you can program up to three vape cycle modes to heat the bowl to specific temperatures for specific times. 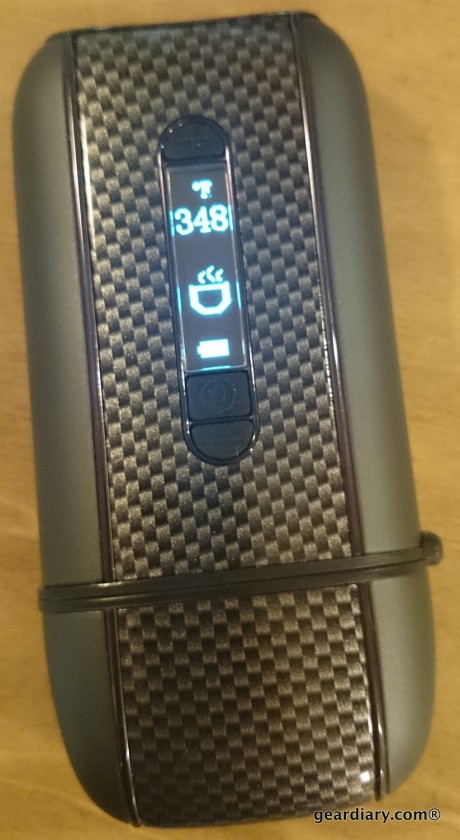 It’s really cool, from a geeky perspective, to handle the Ascent, look at its OLED screen, and try to figure out why it doesn’t make phone calls. 😉 As it heats up, the thermometer shows the temperature in either Fahrenheit or Celsius and once the desired temperature range is hit, the bowl icon shows with waving vapors above it. Those mean just what you think they mean — the vaporizer is ready to go. You can extend the glass straw (or not) and draw out some of the vapor steam.

The best way to describe it, at least in this instance, is like this: you know how when you are about to drink an amazing cup of tea, and you sit there and just breath in the steam and it’s just so fragrant and enjoyable? So thick and rich you can taste it? With this vaporizer, you can; that’s exactly what it’s like.

The only snag I ran into, and maybe it’s just my inexperience? But there were a couple of times when I was vaping chamomile or peppermint, for example, when little bitty flakes of the herbs came back up the glass pipe. Yuck. Is that supposed to happen? It got on my tongue. And that’s when I decided that when it came to really loose, small herbs, drinking them in tea might be easier. Or maybe I’m just doing it wrong. 😉

The Ascent Vaporizer by DaVinci is available from Vape World and other retailers. 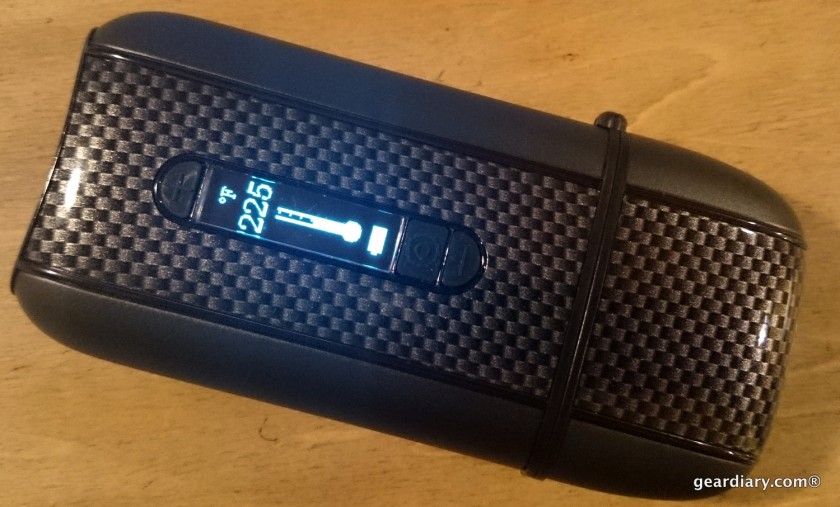 What I Like: Amazing build quality; Lots of extra accessories included in the box; OLED screen with easy temperature control; Easy to clean the glass pieces

What Needs Improvement: At $249.99, the Ascent Vaporizer by DaVinci is expensive; Perhaps more tips could be included in the user’s manual for people who are trying to vape small loose items — so that they don’t wind up eating them? 😉 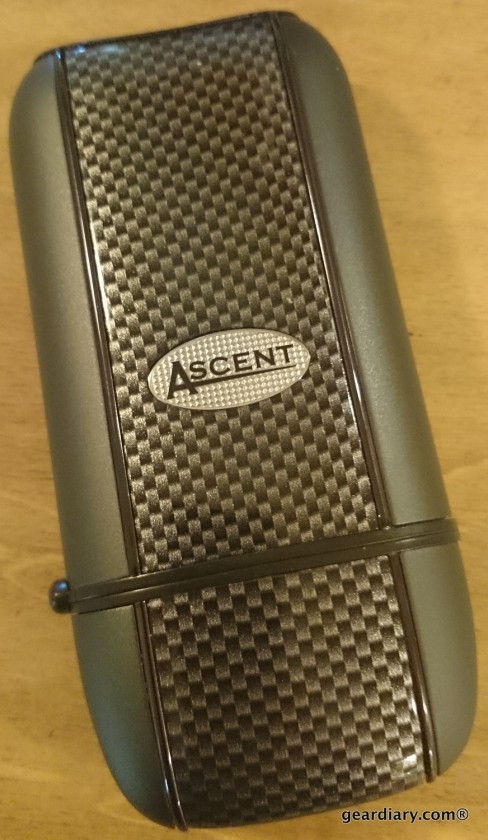