Evernote has updated their Android version of their note-taking app; the new version features a major overhaul, including a material design courtesy of Android lollipop. The material design provides app guidance and has a visual design that is clean and intuitive. Tactile elements like shadows and depth make the interface more user-friendly while still giving you the “Evernote” feel. 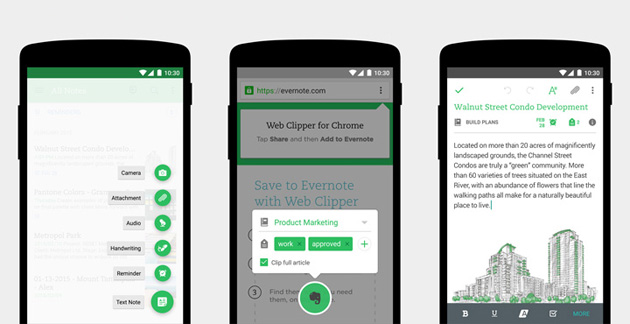 It’s only been a year since Evernote did a major update to the Android version of the app, but this version offers a fresh look that is more flat and brighter. This upgrade brings more focus to your content, allowing you to write and edit more efficiently. With improved, customizable floating action buttons, you can easily create text notes by just tapping the “New Note” button.

If you are an Android user, you can find the Evernote app in the Google Play Store as a free download. For extra features, there are in-app purchases you can make as well from $1 to $49, depending on which you chose.