Did you enjoy reading Ender’s Game for this month’s book club choice? Now’s your chance to sound off on what you thought! Read some of our thoughts and then dive in with yours in the comments! Just remember, the discussion and comments will contain spoilers if you haven’t finished the series. 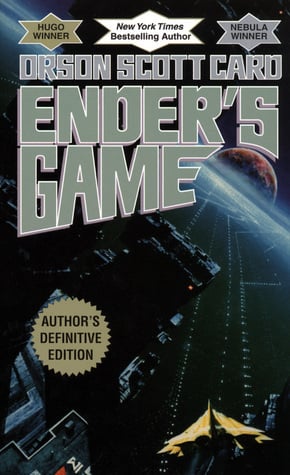 It has been quite a while since I read Ender’s Game! The first time I read it I was in 6th grade, and I am reasonably sure the only reason my parents ok’d me reading it was that they had no idea what it was about! Whenever I reread it as an adult, I’m surprised by the number of mature themes in what is ostensibly a “young adult” novel: xenocide, death, racism, bullying, homophobia, and psychological issues are all on display, and that’s just what goes on in the Battle School! It’s hard to read some of what Ender encounters when you remember that he’s supposed to be a pre-teen. Overall, though, I think the book holds up quite well even today. It looks at how we expect more and more from children, turning them into little adults. Orson Scott Card managed to predict tablets in learning environments, and he even touches upon virtual reality-not bad for a book written 30 years ago!

On the other hand, while re-reading this time I really felt the book would have flowed better if Ender had been a touch older. It’s hard to imagine a seven year old kid beating another kid to death, let alone training a child to be a general at the age of 12. It took me out of the story a few times when I stopped to really think about his age. I do think the Buggers are a creative enemy, and I love the ending, with Ender finding peace with both the Buggers and his brother Peter. The further books in the series are great too, but the ending works quite well as a standalone.

What did you think of “Ender’s Game”? Let us know in the comments, and be sure to stay tuned for our next book club pick!