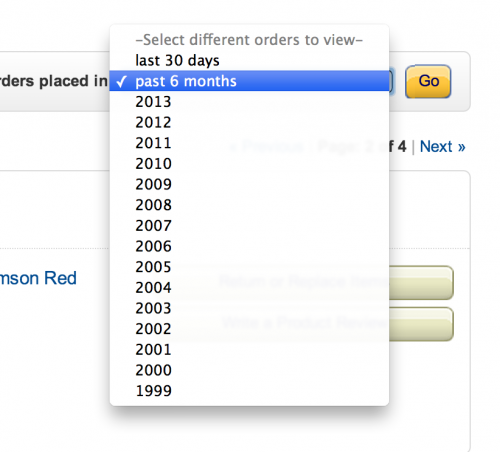 How many years have you been shopping on Amazon?

Do you order items from Amazon? If so, do you remember your very first order ever? I couldn’t have told you on a bet, but the other day I found out that it is possible to look back and see every order that you’ve ever made.

If you sign into your account and go to Your Account/Your Orders, you’ll see your orders from the past six months. But if you go into the drop down menu on the upper right corner, you’ll have the option to go back to the very first year you ordered, and once in, you can easily navigate to that first order. I wasn’t surprised by the items I ordered, but I have to admit that I wasn’t prepared for those items to bring back such memories.

In August 1999, my daughter Sarah was about to turn 10, and she had just discovered Harry Potter. I ordered her the three books that were available at that time, along with four books for myself. 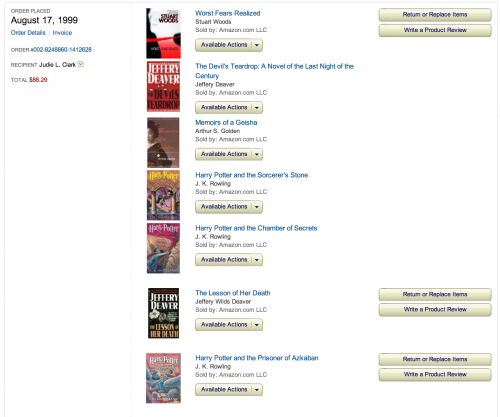 My daughter is now almost 24 and a mother herself; she is still a voracious reader, and she still loves Harry Potter.

As an aside, all six of my 1999 Amazon orders were for books; this is obviously before I went completely digital, and back when I still preferred to have (and had the storage space for) my favorite authors’ hardback books.

I asked the editors to check and see what their first Amazon orders were, and if there were any special memories …

Carly: Apparently in 2005 I purchased “March of the Penguins”. I have never seen it, so it must have been a present for someone. 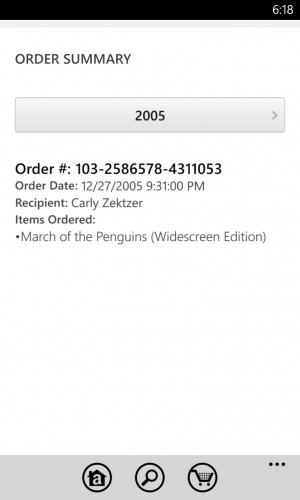 Mike: Hmmm … my ‘new’ account only goes back to 2002 – we were on another ISP for ages that died, and so I had switched to Hotmail. So stuff like my pre-order for Duke Nukem Forever and Star Wars: Obi-Wan from 1999 is lost … (Duke ended up releasing last year, and Obi-Wan in 2001 as an XBox game).

But here is the first one on my current account.

Dan: I was working on my doctorate and bought books for some courses.

The Friday night after I placed the first order, I gave a sermon on my first internet book purchase and why it was unfulfilling and impersonal.

I kid you not.

Judie: Sure enough, Dan still had his draft from the 1998 sermon where he mentioned his order. I thought it was pretty amazing to consider how much things have changed for Dan (and I suspect many of you) since 1998, so I am including it.

I had a strange experience this past week. After numerous failed attempts to find two textbooks I needed for the new school semester, I became somewhat desperate. For some reason, the “clinical handbook of pastoral counseling volumes 1 and 2“ are not best sellers at Barnes & Nobel. And so I turned to amazon.com in a last-ditch effort to find the books. (For those of you who may not be familiar with it, amazon.com is an internet service that can order any book in print for you and have it to your door within a week.) So I logged onto the internet, found amazon.com, and started a search. Sure enough– there were the books I wanted. I ordered them and logged off.

That was last week.

This past Tuesday I raced home for a quick bite of dinner before returning to temple for the evening. I was excited to find a box of books waiting outside my door with the words amazon.com printed in block letters. (I love getting stuff in the mail.) I took the box in, opened it and looked inside. There, wrapped in plastic, were the two books and a receipt. I pulled them out; they were the right books. I checked the receipt for accuracy; it was correct. And then, without even realizing it, I found myself looking inside the box for something else. I caught myself searching, and I wondered what was I looking for? I had the books, and the receipt was accurate. What more could there be? I realized that I was searching for some kind of letter from the company regarding my purchase,  you know — a “Dear Dan, thanks for your order….” form letter. But there was none, and seeing that the box was empty, I realized that I felt a sense of disappointment coming from somewhere within me.

And then I realized that this purchase was different from any other. Every other purchase I’d made before had involved interacting with another person, whether it was in a store or over the phone; whether it was a pleasant exchange or it was less than pleasant exchange, there had always been contact with another person. This time there had been none of that, not even a form letter. I had logged on, made my order and logged off; it was wholly and entirely impersonal. I got my books — but now I realized that there is more to buying books for me than just getting the books. There is more to every transaction — because every transaction is an opportunity for contact — for interacting and for connecting.

Every transaction — every moment — is about relationships. And when there is no relationship — there is emptiness.

My, how things have changed!!

What about you? What was your very first Amazon purchase, and are there any special memories tied to it?  Do tell! =)