I rarely finish a book and immediately add it to my list of favorites of all time. Only a few titles have vaulted to the top at once, and The Martian definitely holds that honor-which is why it’s our next book club choice, just in time for the movie to debut October 2nd (no cheating and waiting for the movie!) 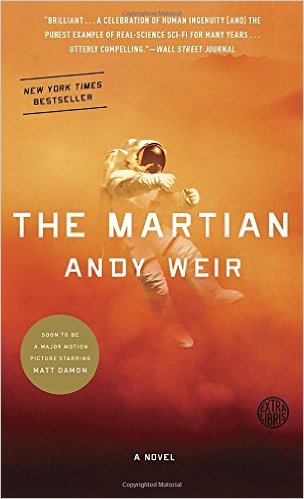 For those who haven’t seen the trailers, or who passed the book in Barnes and Noble but didn’t read the back, here’s the description from Amazon:

“Six days ago, astronaut Mark Watney became one of the first people to walk on Mars.

Now, he’s sure he’ll be the first person to die there.

After a dust storm nearly kills him and forces his crew to evacuate while thinking him dead, Mark finds himself stranded and completely alone with no way to even signal Earth that he’s alive—and even if he could get word out, his supplies would be gone long before a rescue could arrive.

Chances are, though, he won’t have time to starve to death. The damaged machinery, unforgiving environment, or plain-old “human error” are much more likely to kill him first.

But Mark isn’t ready to give up yet. Drawing on his ingenuity, his engineering skills—and a relentless, dogged refusal to quit—he steadfastly confronts one seemingly insurmountable obstacle after the next. Will his resourcefulness be enough to overcome the impossible odds against him?”

What the description doesn’t capture is the sense of humor the main character has throughout his ordeals, nor does it adequately show the nailbiting moments. Somehow, author Andy Weir even manages to make scenes of beaurocratic bickering at NASA exciting, because while you’re reasonably sure this upbeat, exciting book doesn’t end in tragedy, you simply don’t know how it will all be ok. It’s tough to walk the line between hard science fiction and light humor, but somehow Weir manages to do so, and it makes for quite the page-turner. I started The Martian one morning before work, and finished it the next morning, because I couldn’t conceive of reading or doing anything else until I knew how it ended…that’s how good it is!

You can pick up your copy from Amazon, Barnes and Noble, or your local library, but it might require some hunting-even Amazon is sold out of the paperback right now!