Posted By: David Goodspeed May 13, 2016
ShareTweet

Despite the drama surrounding the diesel fuel economy cheating scandal, Volkswagen is still one of the leading producers of automobiles globally. And no matter what unfolds in the wake of its recent problems, the automaker still offers some good vehicles and that includes the 2016 Jetta 1.8T compact sedan with turbocharged gasoline engine. 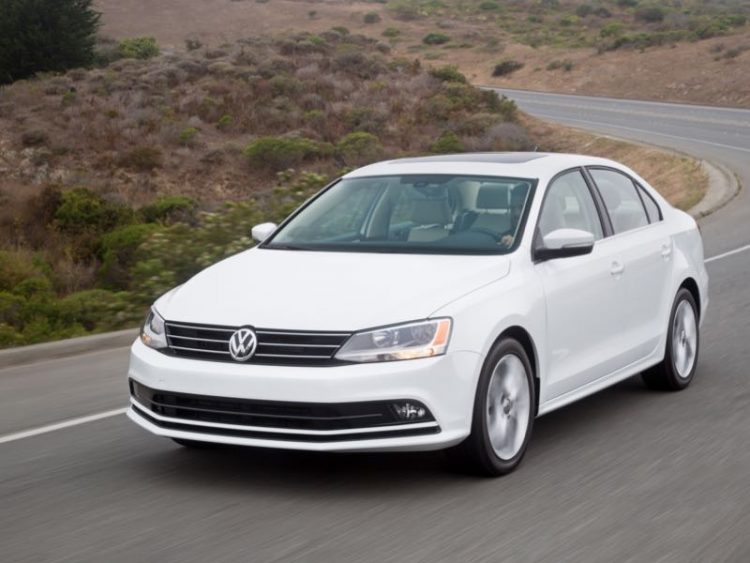 I looked back on the Jetta models I had received for review over the past several years and discovered that with the exception of a hybrid model the rest had all been TDI or diesel powered. The 2016 1.8T was the first gas only Jetta I had driven in quite some time and I was not disappointed. The modern Jetta is the sixth-generation of the model line that was revamped as a 2011 model and for 2015 the vehicle received some midlife styling makeovers. For 2016, Jetta gets a new smaller 1.4T turbo engine along with some technology upgrades. 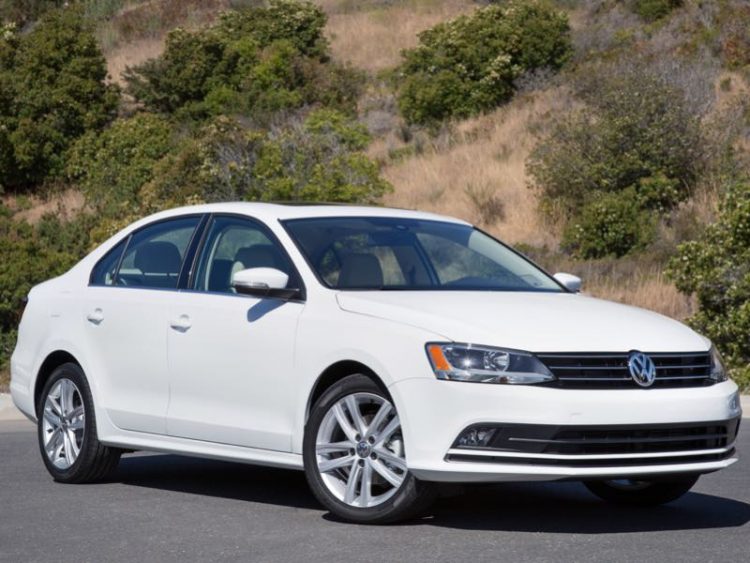 Our tester arrived in SEL Premium trim, which means this car was loaded to the gills. It featured the full host of safety technology including intelligent crash response system, adaptive cruise control, forward collision warning with autonomous emergency braking, blind spot monitor with rear cross traffic alert, rearview camera, and cornering lights. This of course is in addition to all of the equipment the government mandates is on every new vehicle sold in the U.S. (full complement airbags, stability control, ABS braking, etc.).

One thing about the styling of much of Volkswagens vehicles is that it is very understated. There are no swooping arches along the body sides, no dramatic grins in the front fascia, and no rocket ship-like cabins. The automaker leaves things simple and usable, although some might go so far as to say boring. 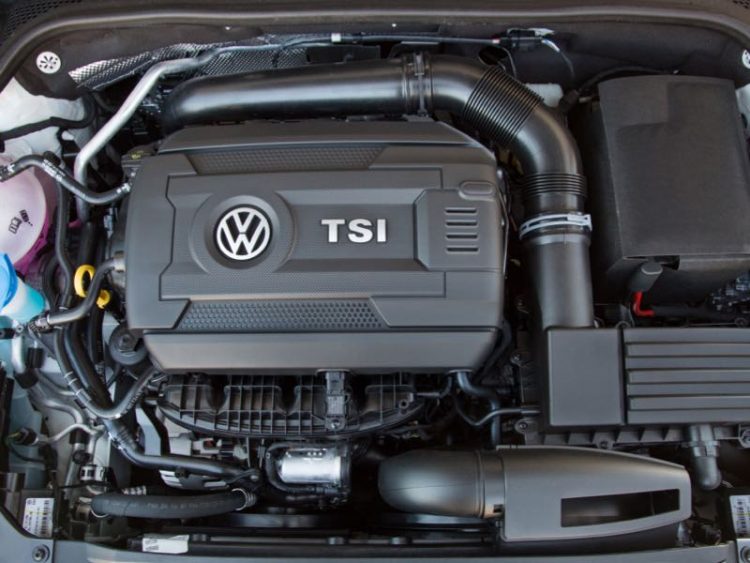 What is not boring is the driving experience the Jetta and its turbocharged engine provide. This turbocharged 1.8-liter inline four-cylinder direct-injected engine provides ample power around town and on the open road. There are 170 ponies on tap along with 184 lb. ft. of torque. This is mated to either five-speed manual or six-speed automatic transmissions with our tester arriving with the latter.

The Jetta chassis is very rigid and provides a stable and quiet driving experience. It feels very solid even in turns and features four-wheel independent suspension for its front-wheel drive configuration. The electro-mechanical speed-sensitive steering never feels too vague and provides a nice amount of feedback when you decide to have a little fun with the car. Our tester came with 17-inch “Lancaster” aluminum-alloy wheels with all-season tires. 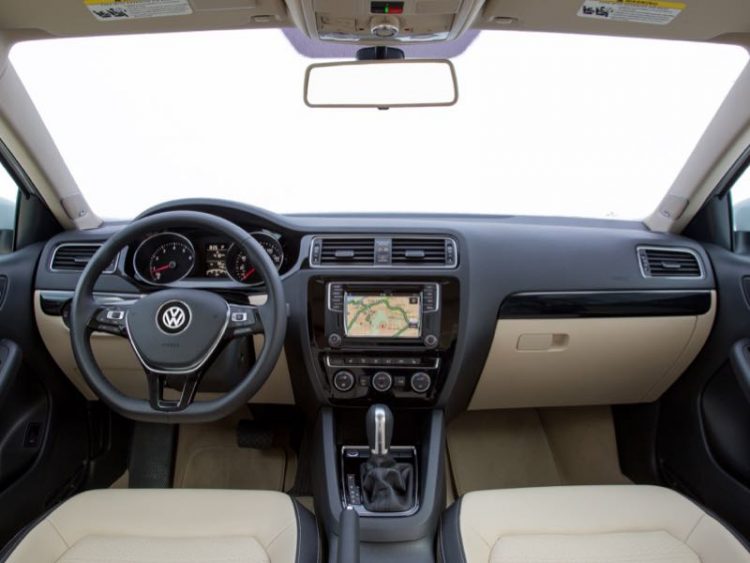 The interior is as understated as the exterior yet VW puts everything right where the driver and passengers need them and controls are well placed and not too overboard technically. There are knobs where you need knobs and buttons where you need buttons. Occupants will find ample head and legroom both front and rear in this five-seater compact sedan with 15.5 cubic feet of cargo space in the trunk and a 60/40-split folding rear seatback with pass-through. 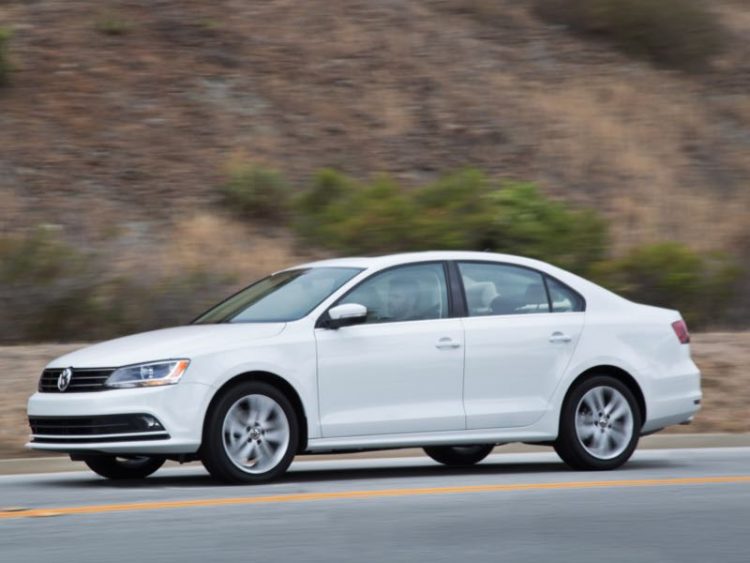 Up front in the cockpit is a 6.3-inch color touchscreen monitor on the MIB II infotainment system complete with USB and VW Car-Net App-Connect and connected vehicle services. The SEL Premium package also adds the kickass 400W Fender audio system with separate subwoofer. 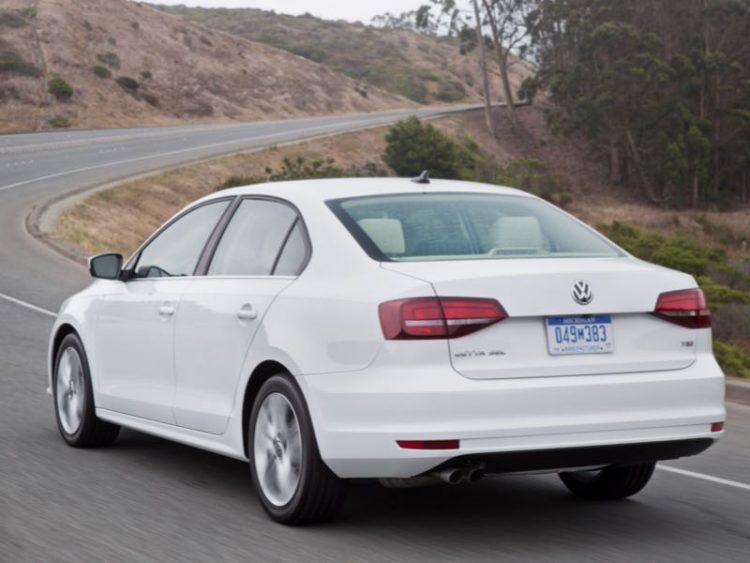 As the diesel drama continues to unfold, it is certain VW has received a “black eye” at the very least and fines and lawsuits have already begun to roll in. Despite the outcome it should not be forgotten that the automaker still produces some very good vehicles and the Jetta is certainly one of those.

Updated: We also drive the 1.4T S with Technology edition

Not long after we received the 1.8T and then the Jetta GLI, Volkswagen sent along the 1.4T S w/Technology (yes, that is what they call it). This was our first drive of the new base powertrain for the Jetta and we were quite impressed. The 1.4-liter four-cylinder engine holds up to its big brother 1.8T quite well while also delivering big on fuel economy – 28 mpg city and 40 mpg highway. Our tester arrived with the five-speed manual transmission and I believe this added to the “fun factor” of the car. Never were we wanting for more power and there were times we had to back off the throttle to avoid tire spin. Pricing for this vehicle came in at $19,495 with the Technology package that consisted of rearview camera, composition media package, Bluetooth connectivity, SiriusXM Satellite radio, cruise control, and power door locks with remote.