This week, along with a number of other auto writers, I attended the national press introduction to the 2017 Kia Cadenza in Middleburg, Virginia. The only things that made the heat and humidity bearable were the beauty of our surroundings and the fun we had while driving Kia’s second-generation four-door sedan. 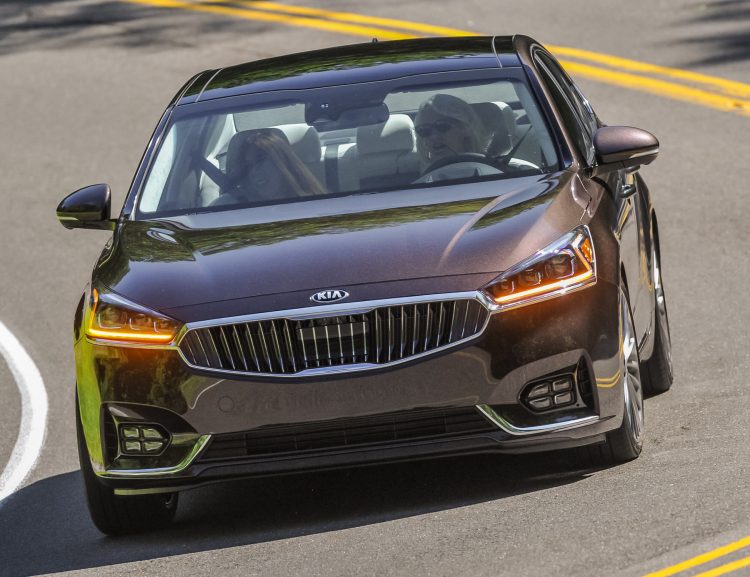 In 1994, Kia introduced the Sportage and Sephia; their marketers will readily tell you that in 2001, they were rated dead last in the JD power Initial Quality Study (IQS); they were behind brands like Saab, Oldsmobile, Scion, Saturn, Isuzu, and Suzuki. Kia kept investing, adding new products to their portfolio, and in 2005 they were the 14th largest automotive brand in the United States, ranked 30th out of 36 brands on the JD Power IQS. They have slowly improved and expanded their lineup. Kia recognized that they didn’t have a dedicated design, there wasn’t any consistency to their brand; they recognized that in order to move their brand forward and compete in the global marketplace, they had to do something.

So the company developed a strategy built around five tenets:

With those tenets in mind, they hired Peter Schreyer, formerly of Audi, with the intent of putting together a team to develop a consistency of design throughout the brand. Peter and his team came up with Kia’s “brand DNA”, and what they affectionately call the “tiger nose grill”.

In 2007, Kia built a dedicated design studio at their Irvine, California campus. Up until this point, Kia and Hyundai designers were sharing the same facilities. In 2010, Kia’s European studio opened, and in 2014 a dedicated Kia studio opened in Korea.

In 2010, Kia introduced their extremely popular mid-size Optima sedan (we’ve written about several of them here); it was described by Esquire magazine as “the most gorgeous car under $20,000”; and Kia feels that it is the vehicle that transformed their brand the most; it really resonated with consumers.

After introducing the Optima, people said they wanted something a little bit bigger, a little more refined; the Cadenza was introduced in 2013, and I was there to drive it. In 2014, Kia came out with their even larger K900 as part of their strategy looking for new segments to enter into. Other OEMs were coming down into the space that Kia had traditionally occupied, so they “said to themselves, ‘why can’t we move up; why can’t we go into their space?'” 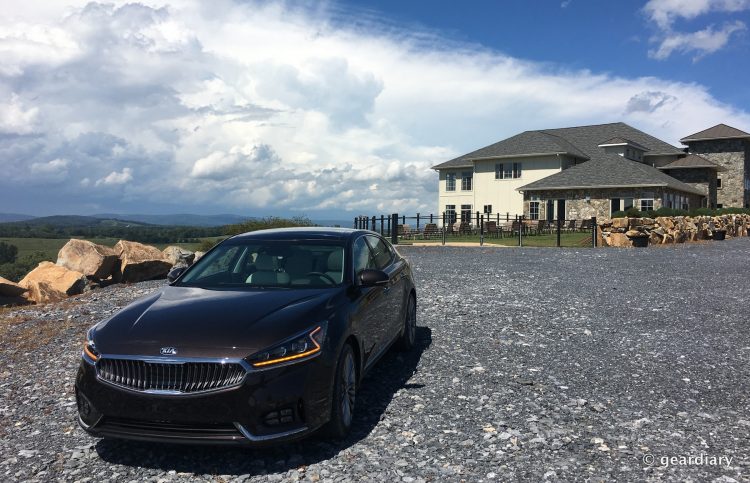 June 21, 2016, Kia was ranked number one on the JD Power IQS; this is the first time in 27 years that a non-luxury brand has held the top spot. Only one other non-luxury-brand has ever held that spot — and that was Toyota, many years ago.

Kia’s dedicated focus on quality and constant refinement of their product are what has led them to this place.  Bridging the gap between the Kia Optima and the Kia K900, the Cadenza is aimed at those who want a larger luxury sedan with all the amenities.

If you find the Optima to be a little too “youthful”, you’ll like that the Cadenza sits a bit more upright, and it has a larger interior for a “more traditional buyer”. It has a V6 engine as opposed to a turbo-charged 4 cylinder, and it has “more sophisticated up-level amenities compared to the Optima”.

The Kia Cadenza “is a car that your dad can feel cool in, but you won’t mind driving yourself.” Featuring clean-cut, masculine elegance, the new Cadenza has a sleek profile without any interior compromises. Kia was able to add a wider wheelbase, they pulled the rear glass back, and in the process, they gave it a more dramatic profile.

While the new Cadenza has the same overall length as the outgoing model, it’s slightly wider and lower in height. The wheelbase has been stretched slightly, contributing to nearly a half-inch of increased leg room for rear passengers. Achieving Cadenza’s sportier profile was achieved by extending the roofline rearward more than two inches, while maintaining rear headroom and slightly improving trunk space. 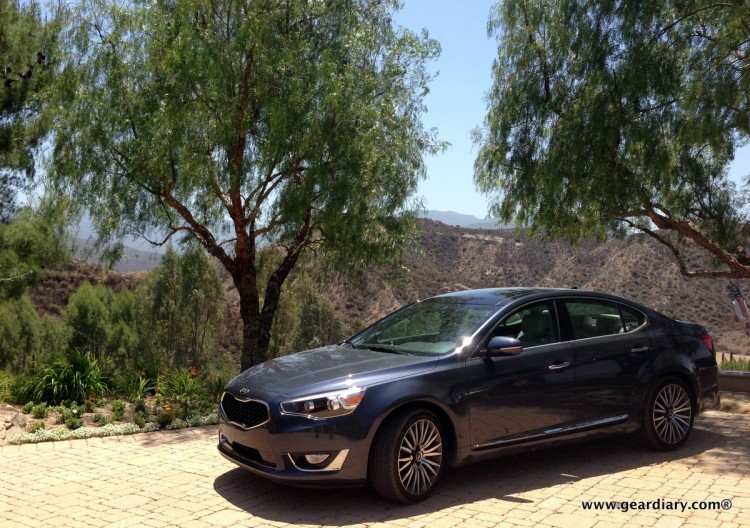 Here is the 2014 Kia Cadenza for comparison

The 2017 Cadenza has a newly designed front fascia, and its “tiger nose” grill has evolved into a new hexagonal shape “that emphasizes the Cadenza’s visual width with lines extending underneath the headlights. But the more substantial change to the front end is the distinct concave grille, which curves in toward the engine bay, giving the Cadenza its handsomely chiseled face.”

At first glance, you’ll notice the front end of the car; it has a “handsome, well-mannered attitude.” 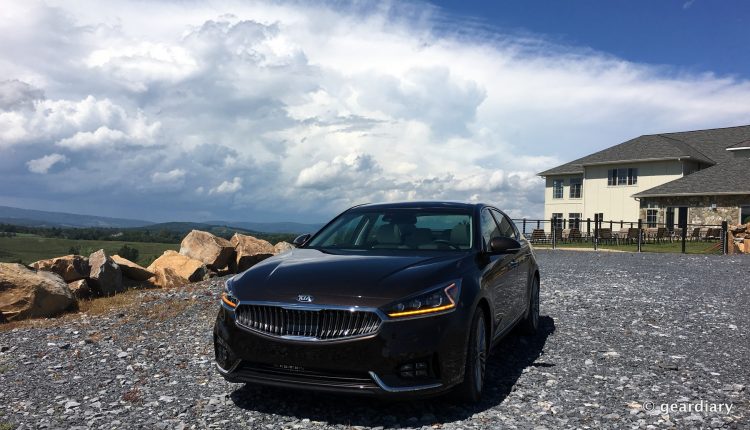 The new Cadenza is available with two different grilles. “Lower trim models will come with the “Diamond Butterfly” front grille that features the same three-dimensional pattern as several siblings within the Kia lineup, but with its own unique appearance thanks to the curved form. Higher trim models will come with the “Intaglio” grille, featuring vertically oriented, faceted blades.” 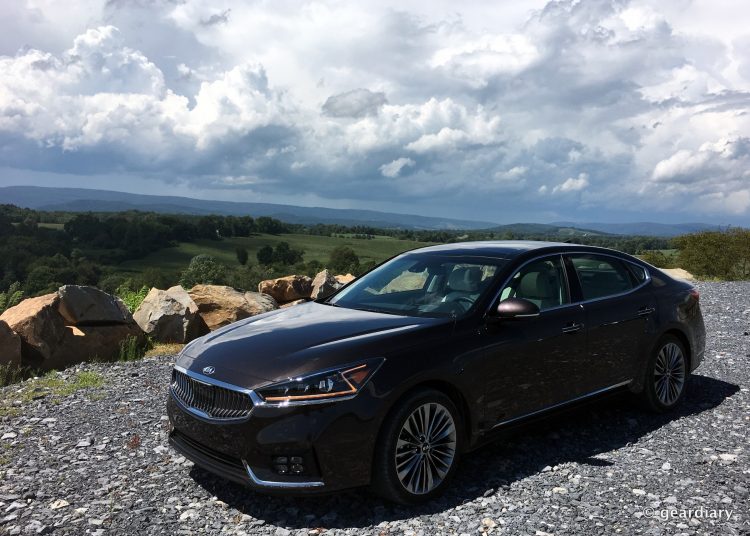 We were driving the Kia Cadenza SXL which starts below $44,000 plus an $895 destination charge.

LED technology within newly designed “piano key” taillights add to the Cadenza’s striking appearance, as it creates visual depth while also complementing the Z-shape lighting signature. Other thoughtful details include tasteful chrome garnishes in all the right places such as on the trunk lid, side mirrors, and rear quarter windows, while chrome side molding lends to the Cadenza’s sleeker profile. 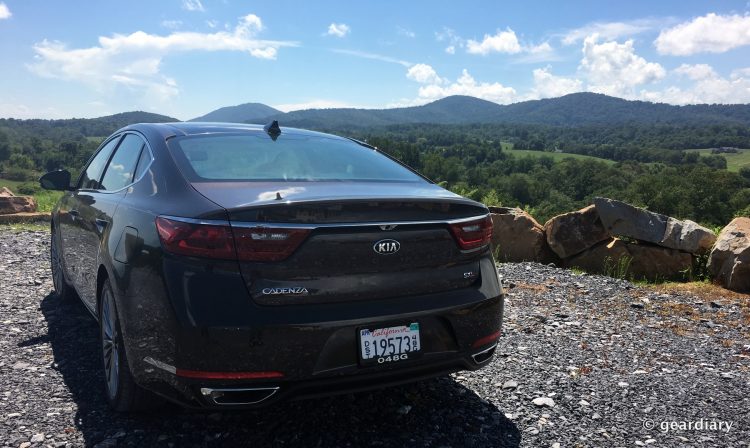 The interior of the Cadenza is roomy and luxurious; if you tend to take clients or family out to lunch or on road trips, they will enjoy the extra leg room and space in the rear seat. There are also retractable side sunscreens in the back seats, so you can block that brightness without losing visibility.

There is a wraparound dashboard that goes all the way across the dash into the door panels, and it features actual stitches; soft leather is everywhere inside the cabin. There is also a Nappa leather trim that is available with “quilted seat bolsters accented by diamond-shaped stitching”. 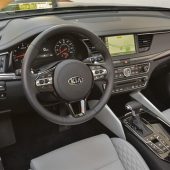 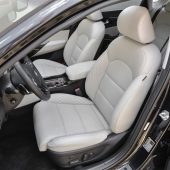 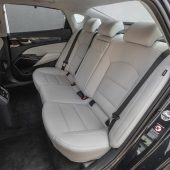 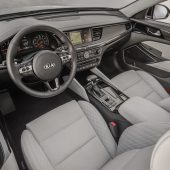 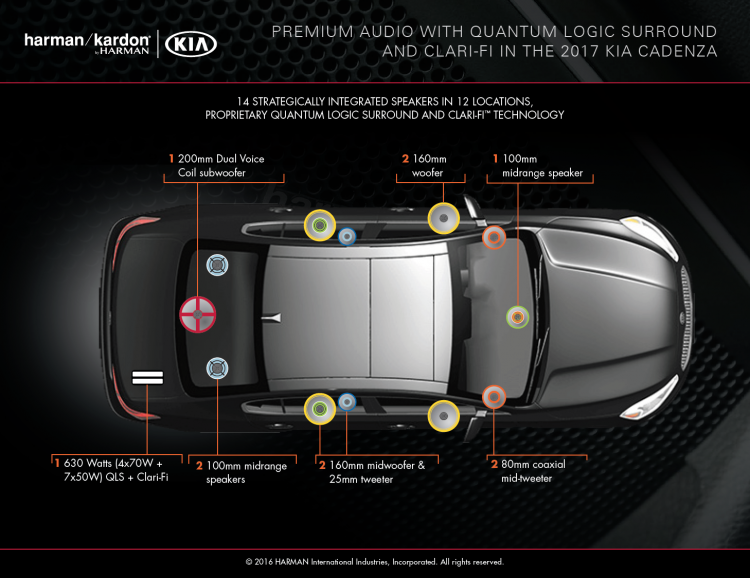 The new Cadenza includes driver assistance features such as Advanced Smart Cruise Control with stop and go functionality, Forward Collision Warning, Autonomous Emergency Braking, and Lane Departure Warning. A new Kia feature is Smart Blind Spot Detection System, which senses “unintentional drifting toward an adjacent vehicle and automatically brakes the opposite side front wheel to help maintain the vehicle’s intended course.” There are also nine airbags, including a driver’s side airbag; Kia is targeting an NHTSA 5 star rating and IAHS Top Safety Plus rating; they don’t have the final scores yet, but that’s what they are aiming for.

There’s also a new color heads-up display that shows the road speed you’re traveling, the speed limit on the road you’re traveling, and if you have a destination programmed into the navigation system it will also display the next turn — right there on the windshield in front of you. The heads-up display will also show if you have a vehicle approaching you on the right, which is a great safety feature. 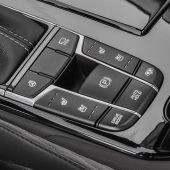 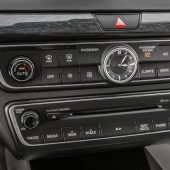 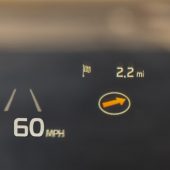 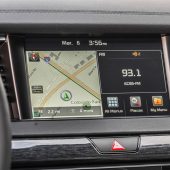 A revised version of Kia’s 3.3 liter direct injected V6 engine is under the hood; it has been retuned for better fuel economy. The new Cadenza has 290 horsepower, and it is a front wheel drive with an eight-speed automatic transmission. 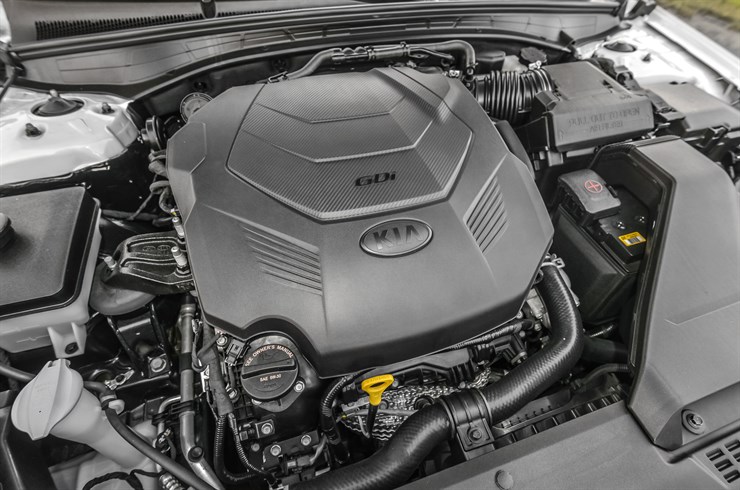 So how was the driving experience? From the moment I got behind the wheel, I was impressed with the comfort and roominess. We blasted the AC while running the heated seats (they are also ventilated) because this is a great trick for anyone with a sore lower back. Unlike other heated seats I’ve used that will eventually develop a hot spot on the seat, the Kia Cadenza has introduced a new technology that over time ramps down the “heat tunnel”, so you don’t get those hot spots. You can turn the seat heater on and use it all day, and the heater will automatically adjust itself so you don’t get uncomfortable. It’s the little things, right?

Our course took us through twisty single lane mountain roads, and I loved the stability and control I had while driving the Cadenza. The only time I got nervous was when large trucks came down the roads next to us — these were single lane twisty roads with no shoulders, but that couldn’t be helped. The suspension tight enough that it never felt mushy — and unlike my experience riding through similar roads in other luxury vehicles, I never felt nauseous. That’s a very good thing! 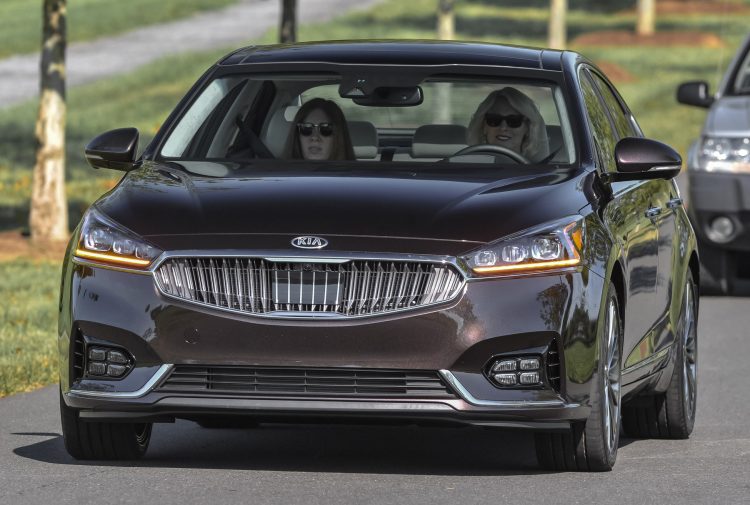 The car had plenty of power for pulling into highway lanes from frontage roads; as fun as it was to drive, the Cadenza was also extremely comfortable.

Several times I looked at our gas mileage, and I was surprised to note that we were averaging 33mpg or better. Honestly, in a big car like this, I thought that was quite impressive. 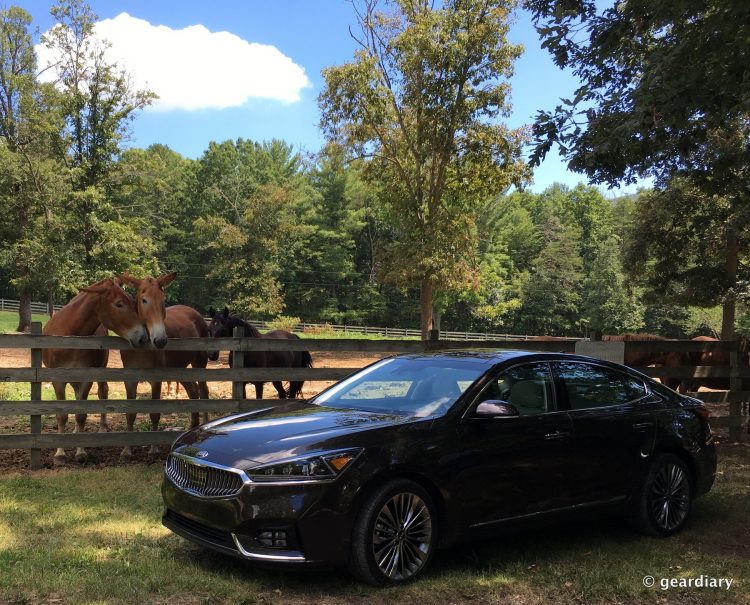 If you are looking for a beautiful, fun to drive, luxurious family car that gets great gas mileage, look at the 2017 Kia Cadenza.

Disclosure: Kia paid for my travel, room, and meals; there were no conditions or expectations made regarding what I chose to write about with regard to my experience.