The world can feel like a minefield when you have serious food allergies. If you eat out, you’re constantly worrying if the wait staff and kitchen understood your allergies, and if you make your own food, you still need to worry about undeclared cross contamination, whether by omission or accident. It’s important to always have an EpiPen handy, and Mylan, the maker of EpiPen, has taken full advantage of their near-monopoly, raising prices by 420% in the last 12 years! 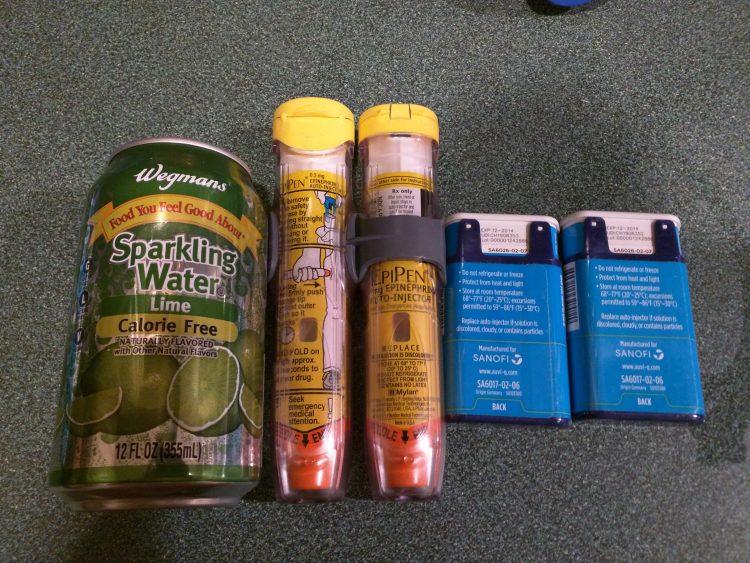 Left to right, seltzer, EpiPen, Auvi-Q. Seltzer included for size comparison, and because I was thirsty.

It’s a real problem when two EpiPens can cost $600, and if you need a set for home and school, that means $1,200 if your insurance doesn’t cover it, or if you need to hit a deductible. Mylan offers a special coupon that knocks up to $100 off the cost, but, again, if you’re on the hook for the full amount, the savings is nice but not dramatic. And they really do have a near-monopoly; there’s a generic alternative, but it is less well known and more complex to use, so it’s not really a great choice, especially for kids.

If you aren’t familiar with allergies, you may not grasp how important epinephrine is to have on hand. In the event of an anaphylactic reaction, epinephrine helps open airways, which is key to keeping swelling from cutting off your breathing. It does not cure the reaction, but it buys valuable time to get a dose of anti-histamines and to call 911 to get to the hospital for further treatment. Basically, it’s the stopgap that arrests the symptoms of anaphylaxis long enough to get treatment, and so being without it is simply not an option if you have severe allergies.

Mylan did have a serious competitor in the Auvi-Q, but sadly, Sanofi had to pull the Auvi-Q after it was discovered there might be a malfunction in the injectors. The Auvi-Q recall actually caused some pharmacies to run out of EpiPens temporarily, as suddenly everyone with an allergy needed to replace their injectors at once. But Mylan took the wrong lessons from Auvi-Q. They seemed to take the failure of their biggest competition as an invitation to run up the price, but that’s going to hurt them when a competitor inevitably comes up with a better product. The EpiPen is, frankly, not a great product. It’s bulky and thick as well as expensive. The late, lamented Auvi-Q, in comparison, was quite compact, plus it had a voiceover that walked you through what to do once the injector was activated. It took all the thinking out of using epinephrine, telling you what to do and counting down for you. It’s very unfortunate the product was a failure, but Mylan can’t possibly be blind to the fact that someone else is going to run with the idea of a more compact and easier to operate epinephrine injector.

If there’s one thing I’ve learned from being an unwilling part of the food allergy community, it is that this community has a long memory, and trust doesn’t come easily. If there’s even a whiff of an issue with a food manufacturer or the slightest chance something could pose a danger, there are people who will simply never trust them again. We have no choice right now but to use an EpiPen, because it’s not possible to live without one (no pun intended). But if someone comes along with a device that’s smaller and simpler, we’re dropping EpiPen like a hot potato. We have good insurance, and we are very thankful that we haven’t paid out-of-pocket for any epinephrine products, but so many people are not as lucky as we are, and Mylan is taking advantage of that to an alarming degree.

For more information on Mylan, check out this article from Marketwatch, and please consider signing this petition to Congress asking them to consider taking action to make epinephrine more affordable for those who need it!