Your home can never truly be complete without a great speaker, and there’s one in particular out there that won’t take up much space, but it will certainly fill a room! 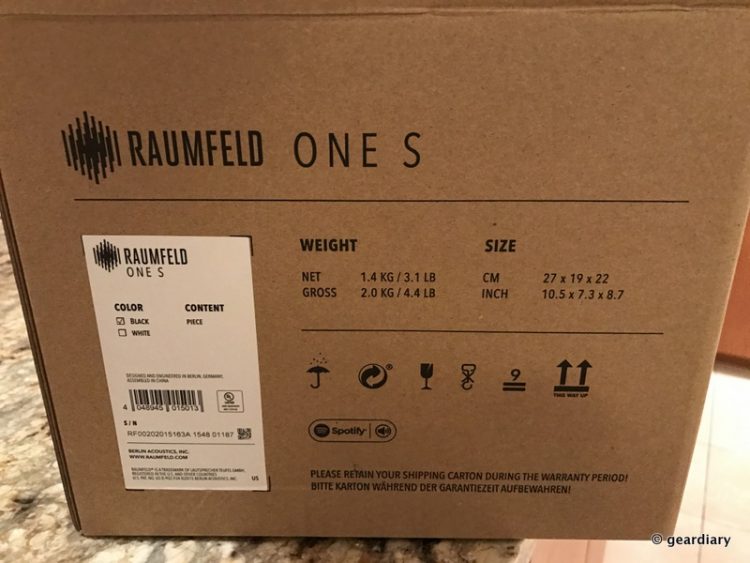 Raumfeld sent over their awesome Raumfeld One S Wireless Streaming Speaker for me to check out. The packaging was about as simple as you could get, arriving in a cardboard box surrounded with plastic and weighing about three pounds. I received the black color, however, the One S Speaker also arrives in white. At $249, the speaker is up there in the price range with the Sonos Play:1 but it packs way better features, although it costs a few dollars more. 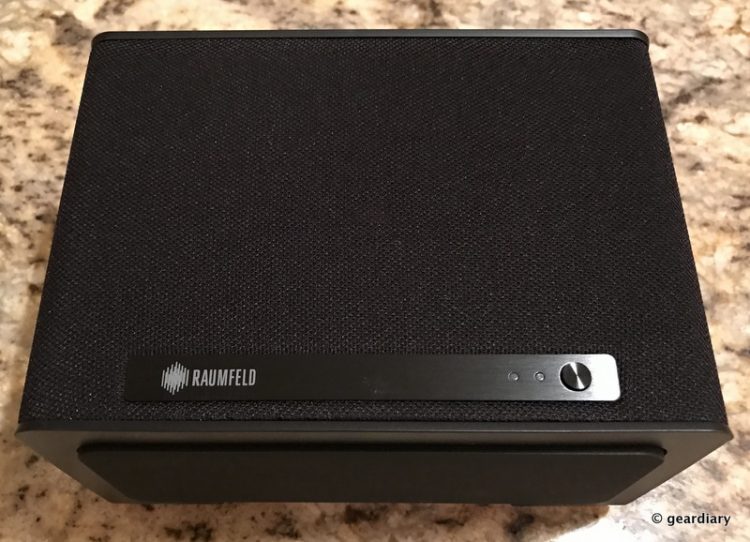 The Raumfeld One S speaker itself is fairly small, and personally it’s my favorite speaker on the market. It’s about 7 inches wide and five inches high, making it Raumfeld’s smallest speaker in their fleet. Seems as if Raumfeld literally made this to compete with Sonos, but competition certainly is a good thing. It will easily fit on a bookshelf or right next to your spice rack in the kitchen, and make for an awesome household accessory that isn’t too gaudy but packs a huge punch. But if you wanted to, Raumfeld has made the One S Speaker compatible with others of it’s kind if you want to make it multi-room. 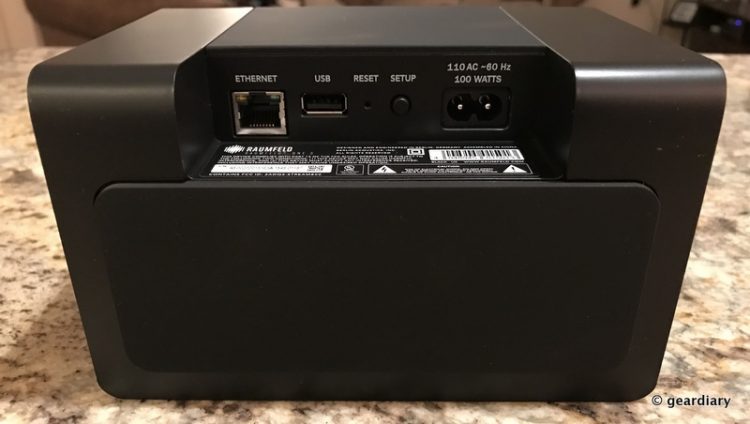 On the back of the One S is where you can plug in the packaged 100w adapter which will go into the wall with ease, courtesy of a lengthy cable. You’re also allowed to connect your device via USB, as well as the internet directly from the ethernet port which is pretty neat. It’s worth noting here that you will actually need to connect the Raumfeld in order to completely set it up. This process can take about 5-10 minutes if you follow directions in the included Raumfeld App, then it will be recognizable and able to be unplugged and used as a typical speaker for your audio. 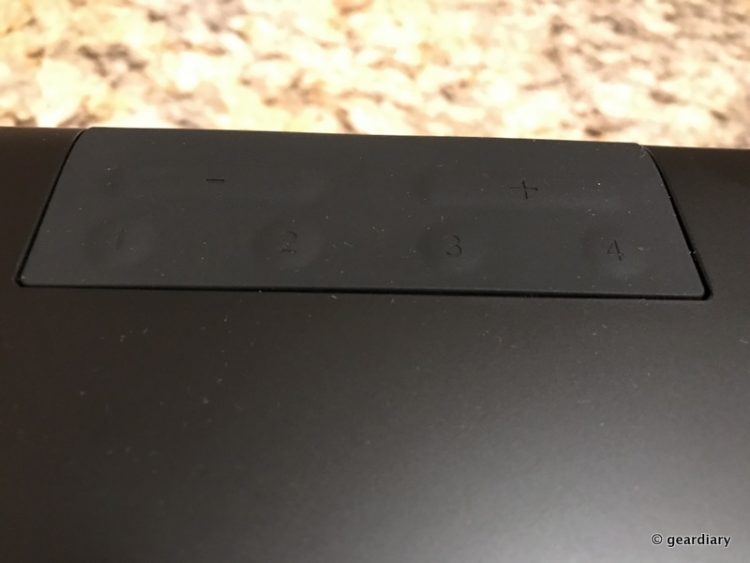 Only featuring four buttons at the top that are made for presets such as radio stations, one thing visibly missing from the One S speaker is the lack of a play/pause button but the reason for that could actually deter some folks. The ideal Raumfeld was truly minimalistic which I adore, and I think its pretty cool when friends attempt to change tracks on the One S and cannot. It is also worth mentioning that the device itself is not made for Bluetooth, so there won’t be any connecting from Settings on your smart phone, but there is a reason behind this.

Specifically made for Wi-Fi, Raumfled’s One S App is top of the line. After going through the router process earlier, the app works SEAMLESSLY. The mostly black and white icons are easy to read and have enough pace you know exactly what you are pressing. The One S actually supports over ten formats from WMA, MP3, and Apple’s own format as well.

There are a host of streaming services that you can use like Tidal and Spotify to stream from, including Napster (which I haven’t touched in years, legal or not), Last.fm, and TuneIn. I use both Spotify and Apple Music, exclusively and it was a bummer to not see Apple Music included, especially since the Raumfeld app seems to be VERY Apple-ish. And even Spotify’s app is somewhat half-baked as it’s not the full featured “Spotify” experience like the streaming company’s own application, but rather a feature called Spotify Connect, which is like a two-step authorization version of Spotify but it’ll certainly do the trick. I’m just holding out for a possible update.

In terms of actual sound, though? Marvelous. Listening to Big Sean’s “Bounce Back” track, the sound just captures you. Although the small speaker is much better sitting in a bedroom or kitchen, the sound isn’t compromised by a larger room. You can easily host a dinner party with friends, and the audio experience will be just as good as any huge audio system you’d see in someone’s living room. Listening to more acoustic tracks like Musiq Soulchild’s “ifuleave”, the artist’s vocals are the focal point in terms of audio, with the actual instruments taking a backseat, but not to the point where you can’t enjoy the melody. 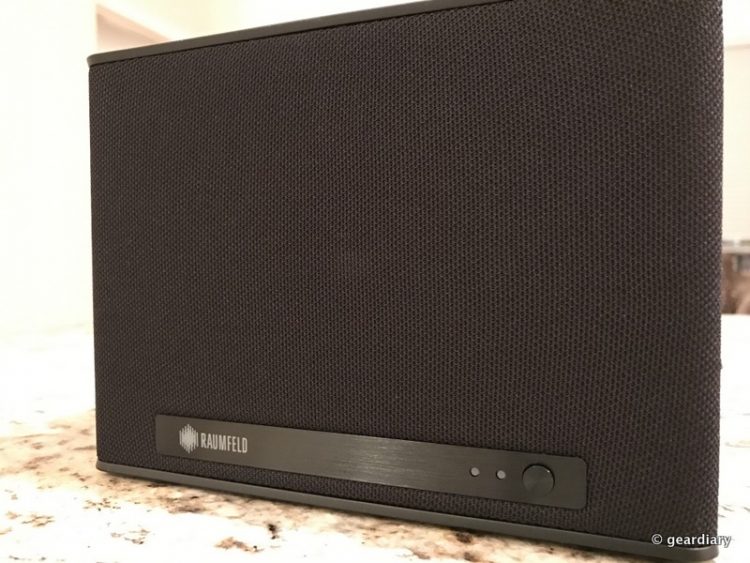 Overall I love my Raumfeld One S Speaker, and at $249, I can safely say that the speaker, as well as the app are two of the best I’ve seen in the small speaker market. The price tag, of course, being the heaviest thing here. But if you can get past the $$$, the sound you’ll get is well worth it.

For more information on Raumfeld’s One S Speaker, you can head over to Raumfeld’s site today!

What Needs Improvement: No Bluetooth