Back when I had time to train for long races, I used a Garmin Forerunner GPS watch. I liked it, it was great, but there’s something to be said for the simplicity of a digital watch that goes from your workout to your everyday life with ease, even if you lose the GPS capabilities.

Plus, my workouts have changed over the years from running-only to a broad mix of cardio and strength, so when Casio offered us the chance to check out a solar charging running focused digital watch, I jumped on the opportunity.

The Tough Solar goes by several different numbering distinctions, but those seem to be mostly based around color and style, not features. I was sent the STL-S300H, which is fitted for women’s wrists and is black with pink-ish accents and buttons. I don’t normally love pink, but the colors work well here in making the overall watch face more readable against a black background. Style-wise, it’s pretty much exactly what you would picture for an athletic focused digital watch. There are four buttons around the face, plus a START/LAP on the front, with labels for the main button functions as well as secondary functions and proclaiming the “Tough Solar” name and that it is water-resistant to 10Bar (100m, so you can swim but not dive). There’s a raised bezel to protect the screen from knocks and scratches, and the band has ridges to give it a rugged look as well as make it a bit more flexible. I have one complaint about the band, and that is the size. My wrists are relatively small, but even I have to wear the band at the third notch from the end-I don’t think anyone with a bigger wrist would be able to wear this watch without swapping the bands. You can swap the band, but it looks like you would need a relatively narrow replacement to fit in the housing, and it’s a tight area to access, so you might be better off just having a local jewelry counter help you out.

I have one complaint about the band, and that is the size. My wrists are relatively small, but even I have to wear the band at the third notch from the end-I don’t think anyone with a bigger wrist would be able to wear this watch without swapping the bands. You can swap the band, but it looks like you would need a relatively narrow replacement to fit in the housing, and it’s a tight area to access, so you might be better off just having a local jewelry counter help you out.

I used to wear watches like this all the time, but I admit I needed the manual to get up and running with the Tough Solar. It fits a lot of features into a small package, so you do need to read through the manual at least once to familiarize yourself with the specific button presses and combinations needed. However, once you learn that, you have a watch that covers multiple time zones, alarms, stopwatches, interval timing, AND never needs a battery replacement. Not bad for a small package!

The alarm is easy to set, and you can have up to five. I’ve found it is loud enough to wake me, but unless I am really being lazy about acknowledging it, it’s not so loud that it disturbs my wife at the same time. Likewise, the stopwatch was simple to figure out without much effort. I did have some issues trying to figure out how to use the interval timer, but once I read the instructions in the manual carefully I learned my mistake (I needed to hold down the ADJUST button for longer). The interval timer is really the star of the watch, in my view, because it is incredibly versatile. You can have up to 99 intervals, and you can set them for any time frames you need. For example, I used them for my 10×10 kettlebell swings. So I said I wanted 10 intervals, and I set it for 30s on/30s off. Every interval was a paired 30/30, and it beeped for each, so I knew I had 30 seconds to swing and 30 seconds to rest. You could also easily extend these if you’re running, cycling or swimming. Yes, you can get similar functionality in hundreds of smartphone apps, but there’s something powerful about having a timer on your wrist. It’s more visceral and connected, and is less likely to distract you with Facebook. 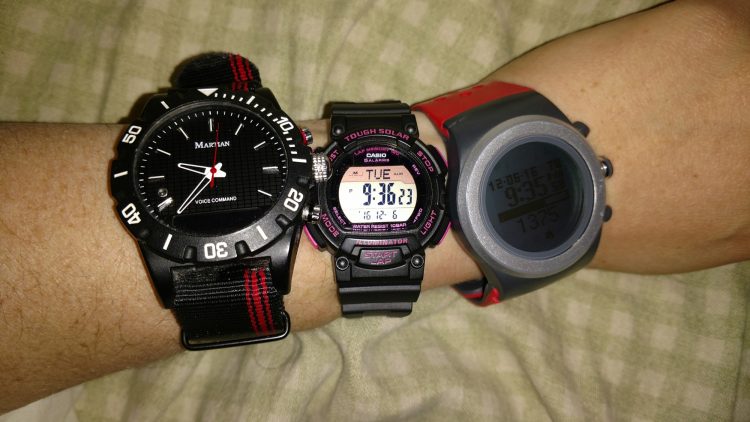 The “solar” in the name is because the watch gets charged by light, preferably sunlight (though florescent lighting works, just more slowly). There’s a small notification in the upper left of the watchface that lets you know if it is fully charged, mid-charged, or low on power. You can also set it for a power-saving mode that shuts down non-essential features if you aren’t using it for a long period of time. I turned the power saving option off, and did not go out of my way to coddle the watch, nor did I specifically set out to charge it. Instead, I used it like I use any watch. The alarm went off daily, I used the timer regularly, flicked around between the screens, and used the backlight generously in the dark. The power indicator stayed firmly in the medium zone, so it basically maintained without losing much charge just via my day to day. I did follow the instructions in the manual and made sure the watch was not tucked under my jacket while outside, so it did receive some indirect sunlight whenever I was outside. If that’s an indicator of how the watch stays charged, I think it’s unlikely anyone would suddenly find themselves rushing to stick their hand out the window to charge their watch. It seemed to keep itself topped off through everyday use, which is another big point in its favor over more complex athletic watches. A solid fitness watch is of no use if you forget to charge it, or it dies quickly, two issues you won’t have with the Tough Solar.

In general, I think there’s something to be said for the combination of simplicity, affordability (only $36.95 on Amazon as of this writing) and features that the Tough Solar offers. You can wear it all day and never really think about it as a timepiece; once you’ve set your times and alarms, it is self-sufficient, and even charges itself through solar and fluorescent lighting. When you do need it to guide you through a run or high-intensity interval workout, it has all the features you need, with big, easy to press buttons, a clear screen, and a fast response. Best of all, you can wear it into the shower and clean it off afterward!

What I Liked: Comfortable to wear; waterproof; powerful features for a non-connected watch; loud alarm; bright backlight; solar charging is easy and unobtrusive