We cover a lot of portable batteries here, but it’s not often that we review one that is targeted at (and powerful enough to charge) laptops — the 12″ MacBook in particular — like the myCharge RazorPlatinum. 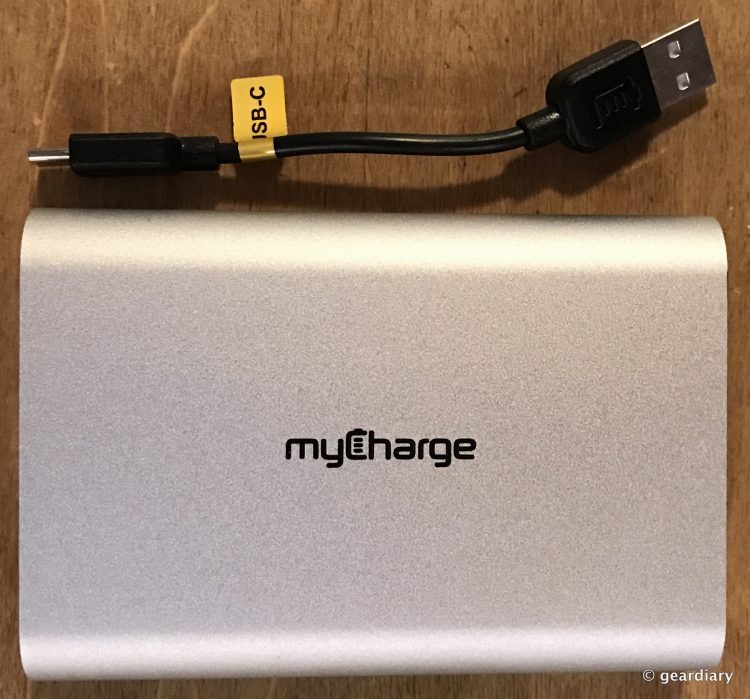 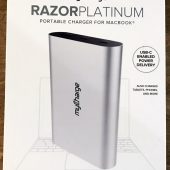 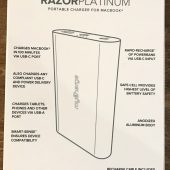 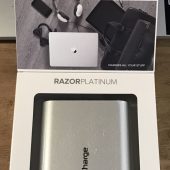 The body of the myCharge RazorPlatinum is wrapped in anodized aluminum; it measures 4.3″ long by 3″ wide by 0.9″ thick, and it weighs 10.1 ounces.

The 13400mAh RazorPlatinum is not only the most powerful portable charger in the myCharge lineup but also the only charger capable of powering a laptop. The USB-C port delivers a 36W output and is able to fully charge a MacBook in 100 minutes. Charge any tablet, smartphone or other device via the RazorPlatinum’s standard USB-A port. Recharge the RazorPlatinum via the MacBook 29 watt adaptor in just 2 hours. 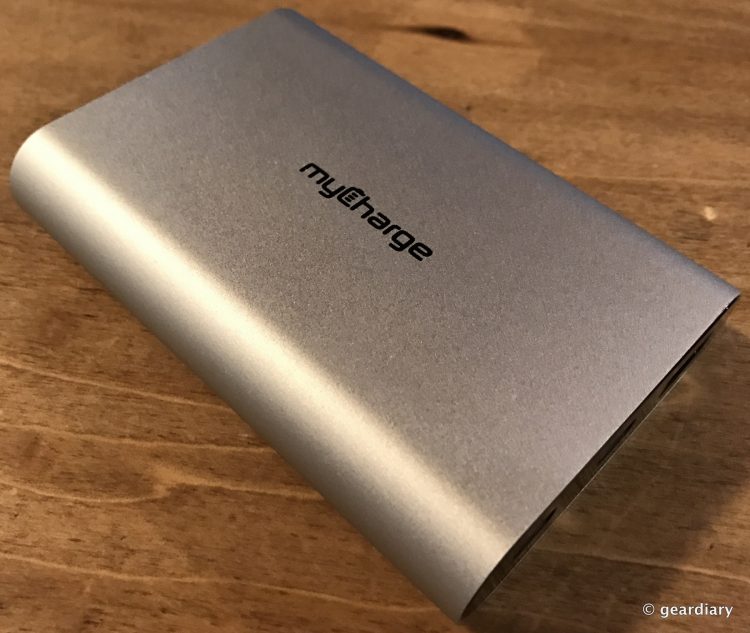 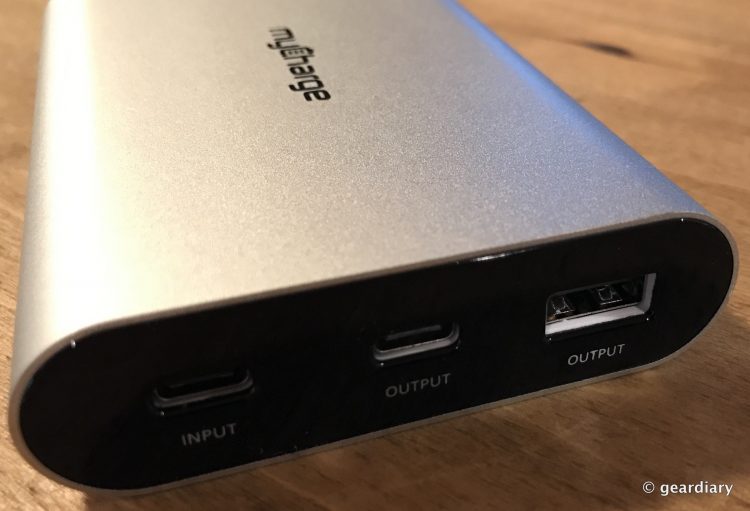 In the center of the business end, four blue LEDs will light up in 25% increments when the battery pack is charging; they will also glow a few seconds after you start charging a device from one of the output ports to indicate how much juice is left. 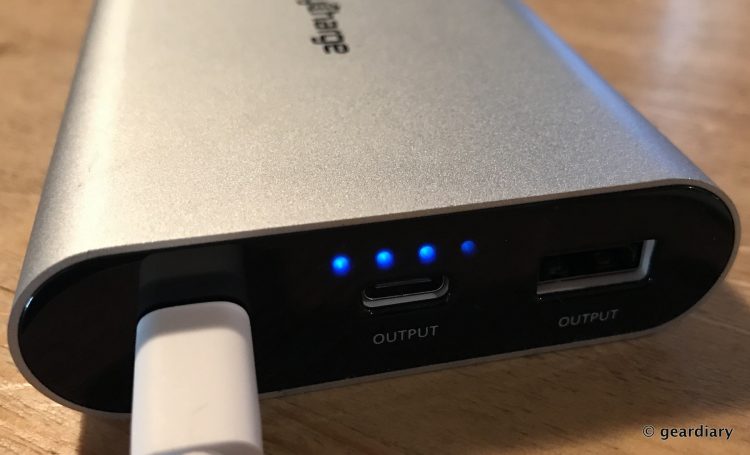 The myCharge RazorPlatinum has smart-sense, to make sure that it is compatible with any device plugged in, and it has ultra-fast charging, which they say makes it 65% faster than competitors.

I used the charger to power up the dead as a doornail (oops) battery on my Huawei P10, and it went from 0 to 50% in 62 minutes (using the USB to USB Type-C charger included with the phone); using my MacBook’s Type-C to Type-C cable, the charger took the P10 from 50% to 100% in 65 minutes (which I thought was surprising), so there’s not much of a difference (in case you were wondering). That didn’t seem particularly fast to me, but it’s not a usual thing for me to charge a phone from dead to full; usually I’m topping it off at 80% or so.

One thing I should mention is that when you use the regular USB port for charging, there can be a couple of seconds worth of lag time before the charging starts — which is enough to make you wonder if it is working or not, but if you just sit tight — it will start.

Charging my Macbook with the MacBook’s Type-C to USB Type-C cable took 1 hour 40 minutes to go from 9% to 68% — upon which point the battery started blinking with a single “I’m almost out of juice!” notification LED. That’s not bad, although if I am doing the conversion correctly, the MacBook’s 41.4-watt-hour should only equal 8280mAh; it’s also possible that I need to repeat the test after the portable battery has been used a few more cycles. I should mention that the RazorPlatinum did grow quite warm while charging the MacBook, but that’s normal.

I would like it if the myCharge RazorPlatinum had a built-in USB-C charger, similar to how the myCharge HubUltra I reviewed last year (and still use all of the time) does, but the addition of the small Type-C charging dongle helps make up for that.

Pass-through charging is a great feature; you can charge the RazorPlatinum while also using it to power your MacBook or phone, and this is a handy feature I take advantage of when traveling (it means fewer wall chargers that need to be carried). 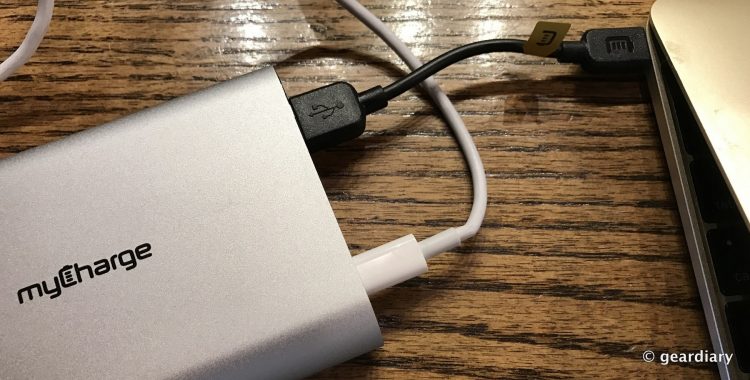 The myCharge RazorPlatinum can power anything you need to charge — whether it’s your MacBook, tablet, or phone. It doesn’t take up much room, and it’s powerful and multitalented enough that you won’t want to leave it behind. 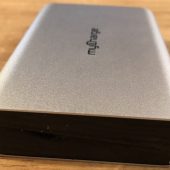 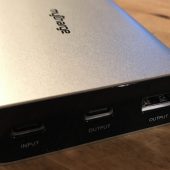 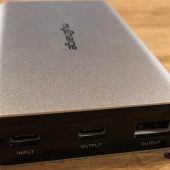 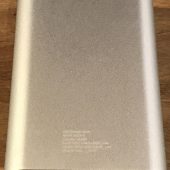 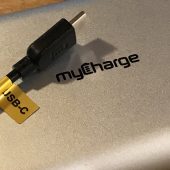 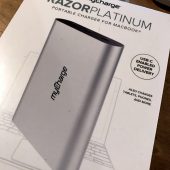 The myCharge RazorPlatinum portable charger for MacBook retails for $99, and it is available directly from the manufacturer and other retailers including Amazon [affiliate link].

What I Like: Compact size; Ability to charge a MacBook in under two hours (tested and true); Can also charge tablets and phones

What Needs Improvement: No built-in Type-C charging cable, although a USB to Type-C dongle is included; Won’t quite charge the MacBook from empty to full