Ostensibly, part of our agenda was to experience Lexus’ Enform vehicle information system. In addition to providing peace of mind through features like Stolen Vehicle Location, Emergency Assistance Button, Enhanced Roadside Assistance and Automatic Collision Notification, Enform has been expanded to include some app-based features such as Remote Engine Start/Stop, Key Lock, Vehicle Finder, Guest Driver Monitor, Vehicle Status and Alerts. Unfortunately, the system relies on the driver’s internet connectivity through a paired device to take advantage of most of the features, and Walland, TN is (delightfully) in the middle of nowhere, so service was spotty at best.

On the good side, as a Lexus driver IRL, I already had experience using the system, I was surprised by a few new apps available as part of the Lexus Enform App Suite. Now you can access apps like Pandora, Yelp, Slacker, iHeart Radio, Movie Tickets.com, Open Table and Facebook Places without having to look down at your phone. I guess I can see the value in being able to easily check in on Facebook if you’re into that sort of thing, and the chance to plan dinner and a movie (hopefully) from the passenger seat could be appealing. It is a pretty pricey optional service at almost $350/year for access to all the services, but you can’t put a price on safety. Or maybe you can; right around $350. (Plus the first year is free courtesy of Lexus!)

Rather than take you through all of the tech of all six vehicles I tested, I’ll concentrate on two aspects: the sound and the user experience. First, the sound system. Lexus has partnered with Mark Levinson Audio, a manufacturer of the highest of high-end home audiophile sound gear that is known for being among the best in the business with home systems running more than a quarter million dollars for a complete package. Actor/musician Jamie Foxx reputedly purchased a Lexus specifically because it had the Levinson system and because he loved the sound from his home set up.

Indeed the sound in every vehicle we tested was outstanding, with true fidelity at volume levels from lowest to high. The huge LX 570 actually was equipped with two hi-definition screens for the back seats plus another wide-screen on the front dashboard that displayed driver data and the tech interface when the vehicle was in use, but which could mirror the other two screens to play DVDs when the vehicle is turned off. Combined with the 19 speaker Mark Levinson system, the concept of actually driving to a drive-in theater would be dead to me if I owned one of these. I’d just watch movies in my driveway. 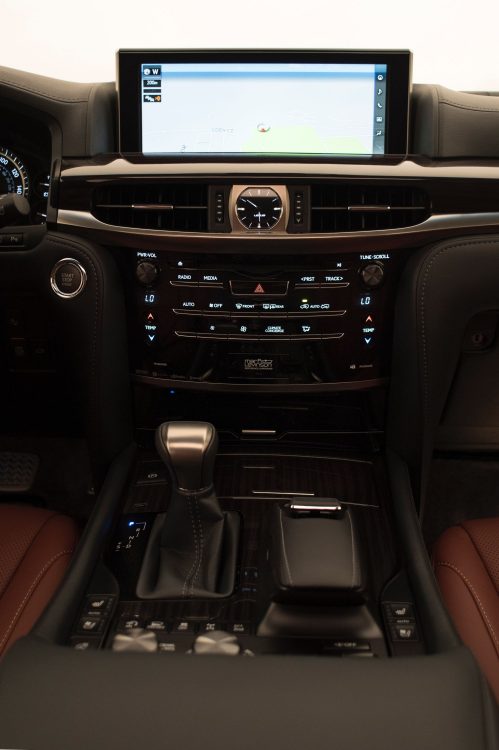 The fidelity represents .1% total harmonic distortion, owing to the fact that each system is designed around the particular architecture of the individual model of vehicle. The use of 7.1 channel architecture provides a true surround sound experience in the cabin area, which I imagine could be pretty disconcerting if you were watching “Jurassic Park” and heard a raptor coming up from behind you in the third seat.

While music at volume was certainly impressive and a great way to go rockin’ down the highway, I was more taken with the fidelity at low levels. It’s not like these Lexuses (Lexi?) have a ton of road noise that needs to be muffled by a subwoofer and concert hall-quality cones, but the Mark Levinson system is more than up to the task at any volume choice.

Previous Page2 of 4Next Page