On the surface, the smart speaker market is already pretty packed with competitors. The two most well-known of these, Google Home and Amazon Echo, dominate the market. So why would someone like Harman Kardon and Microsoft team up to create what is arguably a late entry into this competitive landscape? 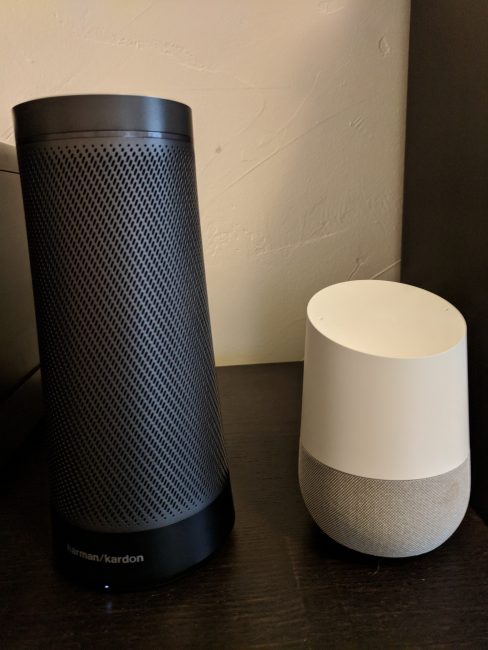 Simply put, because they know they have something that can truly compete. The new Harman Kardon Invoke is a $199 smart speaker that is powered by Microsoft’s Cortana. It is a stunningly beautiful design that has the audio quality that you would expect from Harman Kardon. But is so much more. Skype calls – free in the US, Canada, and Mexico – are included, smart home device support is there and, then there is Cortana. Microsoft’s personal assistant is no slouch, and in accuracy, it is only behind Google Assistant on answering questions. This combination of hardware and software works and it works well.

Recently we here at Gear Diary were sent the Harman Kardon Invoke from the company, and having used it in my office for these past few weeks, I have to say I’m sold. If you are deep in the Microsoft ecosystem and leverage Cortana on your phone or on your Windows 10 PC, this is the smart speaker for you.

When you open up the elegantly designed box for the Invoke, you are immediately struck by the beauty of the device. It measures 4.2 x 9.5″ or 107 x 242mm in new money and it weighs a hefty 2.3 lbs (1kg). Size wise, you are not looking at much more than the Amazon Echo but the Invoke is constructed of beautiful graphite aluminum mesh surrounding the speaker and microphone arrays. This looks and feels like a well-designed device.

Internally, there are six speakers and two passive radiators that give amazing sound quality. The speakers consist of three 1.75″ woofers and three .5″ Tweeters with the two radiators allow for 360° sound.

From a connectivity perspective, you have Bluetooth 4.1 LE available to connect your phone or another device to the Invoke. WiFi 802.11b/g/n/ac are also supported at 2.4GHz and 5GHz.

Turning back to the exterior, the base of the Harman Kardon Invoke is black with the company’s name on it and a small white LED to let you know that it is powered up. on the back side of the base is where you will find the Bluetooth activation button as well as the microphone mute button. At the top of the Invoke is where you will find the LED indicator that Cortana has heard you or is working on your query. This is very similar to the indicators provided on the Google Home or Amazon Echo. Volume control can be adjusted thanks to ring dial at the top of the Invoke with the LED indicator showing a white circular pattern for how high or low the volume is set.

From a pure aesthetics perspective, you will not find a more beautiful smart speaker than the Invoke. Period. I’ve been a long time Google Home user but the looks of it are not exactly cutting edge. The Invoke looks fantastic and this is not something you will want to try to hide away.

As you would expect, the setting up and configuration of the Invoke is driven from the Cortana app on your PC, Android phone or iPhone. When you power up the smart speaker, you will hear Cortana greet you and will be instructed to continue the setup from the app.

For this review, I am using the Cortana app on my Pixel XL Android phone but the process is pretty much the same on your PC or iPhone. In the app, you will need to go to the Devices tab in Cortana. You will need to accept the terms & conditions and once done, the app will start looking for your Invoke. Once found, you will confirm that it is the correct device by the matching light patterns at the top of the Invoke and within the Cortana app. Invoke will then be connected to your WiFi network through the Cortana app and as a final step, you can link up your music service of choice. Currently, there are three options: iHeartRadio and TuneIn which are both free while a premium Spotify account (remember, Spotify is replacing Microsoft’s Groove music service at the end of this year) can also be connected.

In all, the setup of the Invoke took about 10 minutes and that was including a software update which was required. The setup is also very easy to follow. Microsoft has done a great job with the Cortana app in making it clear what to do next and how to assure that everything is set up correctly.