When Raina saw the CleverPet game console on Facebook, she said, “We need to get Nava one of these.” (Nava is our eighteen-month-old miniature golden doodle.) I asked why the dog needs a game console. Raina replied, “Not need… want… she’ll love it.” This is the first in a series of posts about Nava and her app-controlled game. 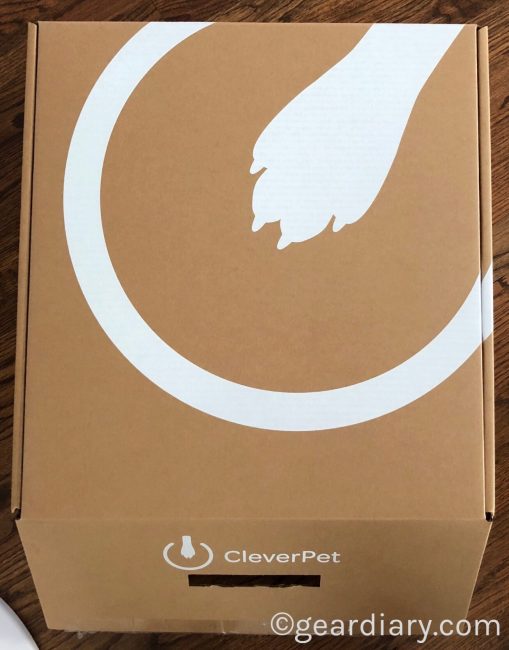 Harness your dog’s energy with puzzles that stay challenging forever: The CleverPet Hub is the world’s first game console for dogs. The games, which were designed by animal-loving cognitive scientists, keep your dog busy and out of trouble for hours each day. Give your dog more than a walk and join thousands of proud dog lovers who are already realizing their pet’s full potential! 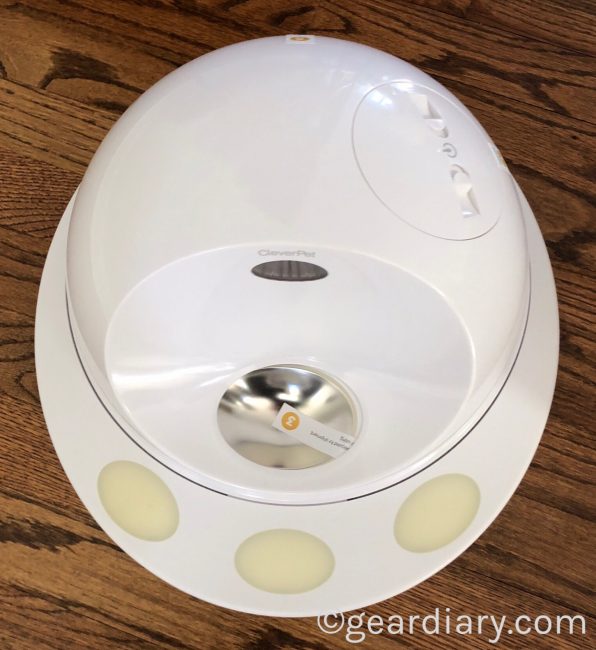 The hub is a fairly large plastic unit that measures 16 x 15 x 7 inches and weighs in at 11 lbs. It ships with a 12V power adapter and needs to be powered on in order to function. The “tank” inside the device holds food or treats that are delivered to the dog over time. It holds 2 1/2 cups of dry kibble and works with any dry food that is smaller than a dime. It cannot be used with wet or moist treats.

At the front of the CleverPet is a flat area with three different touchpads and a space that, depending on where the device is in the cycle, is either flat or has a concave metal “bowl.” As the company notes, the design is durable and easy to maintain, has a stainless steel fading bowl, a dog-proof lid, and a non-spin base.

The area behind the touch pads rotates to either present the dog with a flat space or the metal bowl. The idea is rather ingenious. When the CleverPet rotates to reveal the metal bowl the dog is presented with some treats or pieces of kibble. When it rotates out of view the dog has to wait for the next rotation. This is where it gets interesting. The CleverPet ships with a few different games and, over time, receives an update with additional games. At first, the dog simply gets a treat or is forced to wait but, over time, the device begins to “demand” that the dog perform a series of actions in order to trigger the release of treats or kibble. For example, there might be the need to tap one of the three pads to release the treat at one time but, once that is mastered, the dog would need to touch any of the pads that are lit. (This will make more sense in a moment.) 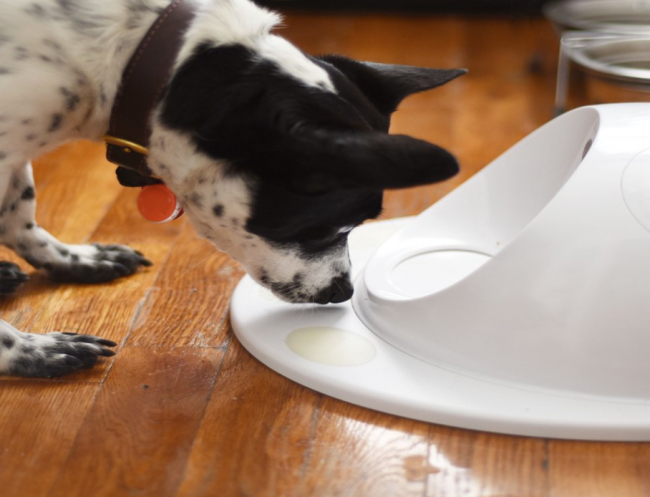 CleverPet begins with the assumption that, “dogs are happier when they have a job to do.” That’s rather obvious but to back up their assertion, they cite a study in Animal Cognition found that dogs seem to be happier to work for their rewards than to be given treats without earning them.

With this assumption in mind, they set out to create a device that would make dogs work for their food and have fun doing so.

The Science of Play: From the time it arrives at your doorstep, the Hub will captivate your dog’s mind with challenges based on the science of animal behavior and cognition.

The creators of CleverPet go on to discuss three different principles that go into their understanding of dogs and why their creation is effective.

The first is Associative Learning. As they explain,

Finally, there is Adaptive Training. They point out that:

A puzzle with the right difficulty level is motivating and engaging: (How do I get that treat?!). If a game is too easy, boredom leads to giving up. If it’s too hard, animals will quit out of discouragement. The Hub continuously adjusts the type and difficulty of its challenges based on your pet’s current ability.

These three understandings combine to create a machine and connected app that leverages each in a manner that allows dogs to not only be engaged but to work with ever-more complicated puzzles.

Here’s a video of one of the CleverPet puzzles…

In all, CleverPet currently offers 12 different challenges that advance automatically as a doing learns to interact with the device. Of course, the puzzles start off rather simple — for example, “press one of the three touchpads when they are lit, and a treat will be delivered”- but they become more complex over time. The goal is to have puzzles that are challenging but doable, so the dog is kept engaged. 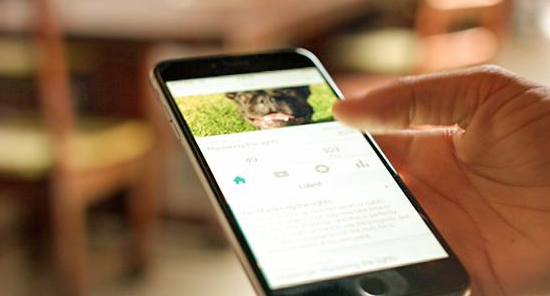 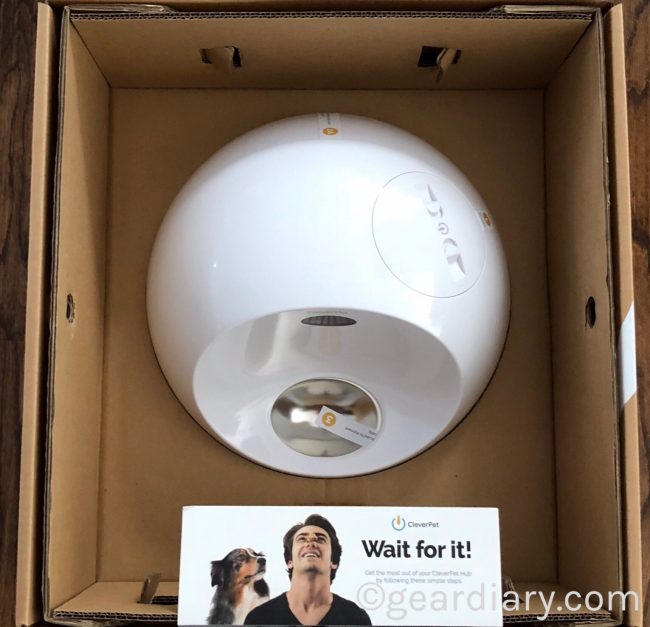 The CleverPet arrived at my home about two and a half weeks ago. It is simple, white plastic but looks and feels fairly substantial. I became familiar with the device and then connected it to the iOS app. 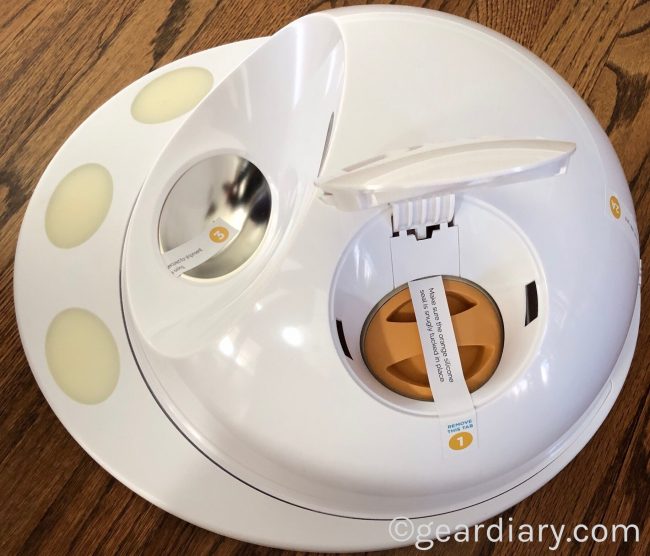 I filled the food bin and was excited to see my golden doodle Nava start having fun. Little did I know that Nava’s journey with the CleverPet would perfectly follow the path laid out by the company on the product website. 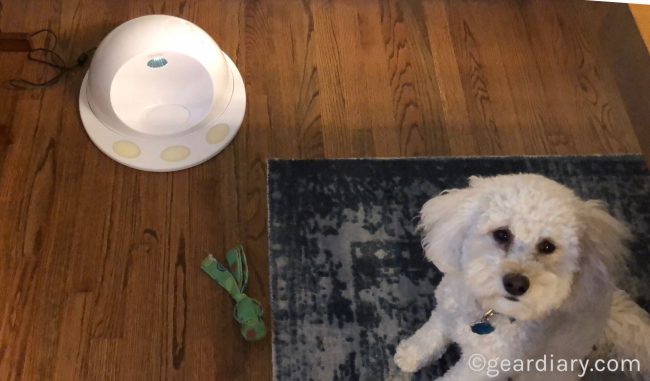 Getting Comfortable: From the time the Hub arrives at your doorstep, your dog will begin to approach and explore the Hub until it becomes a familiar part of their routine.

I put down the CleverPet and watched as Nava began expressing her displeasure at having something new in her space. She barked at it. She kept her distance from it. She made clear that she was not happy.

That lasted a few days. But then, Nava’s interaction with the device changed a bit. 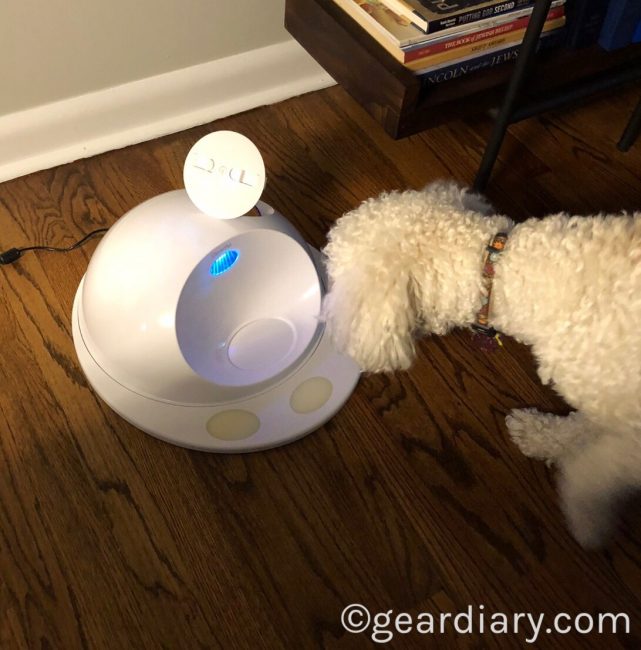 Getting Curious: Your dog will actively explore the Hub and begin to associate it with food and treats. Your pup may scratch, stare, sniff, or bark at the Hub. All of these are signs of your pup’s piqued curiosity.

Nava started getting closer to the device without freaking out. I placed food in the metal bowl but she would not go near it. When, however, I placed her favorite treat on the CleverPet’s rim she would move in tentatively and then grab it. Eventually, she seemed okay with the food on the rim but still avoided the actual food bowl. 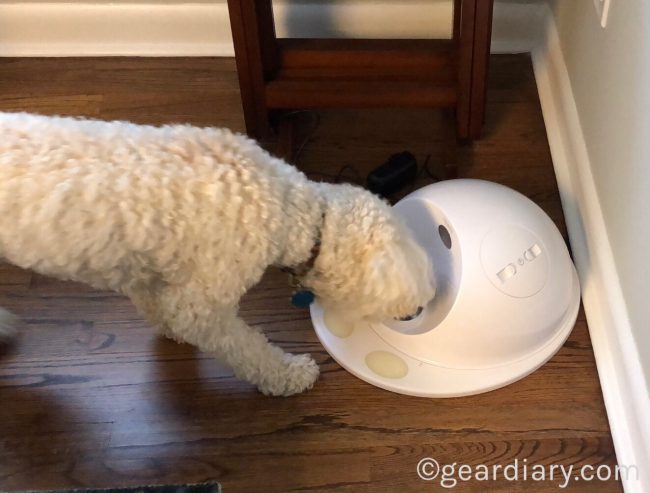 My wife Raina cam home and we started trying to get Nava to use the CleverPet with both of us cheering her on. Suddenly, with the device unplugged, Nava began eating from the metal bowl. We let this go on for two days and then we plugged it in. At first, Nava was back to being skittish. After a day or two, however, she realized that when the device made noise it meant there would be a few treats for her. She began moving in and snacking when treats were released. Over the course of a few hours, she went from being skittish when the CleverPet made noise when “opening” to being just fine when the noise occurred. 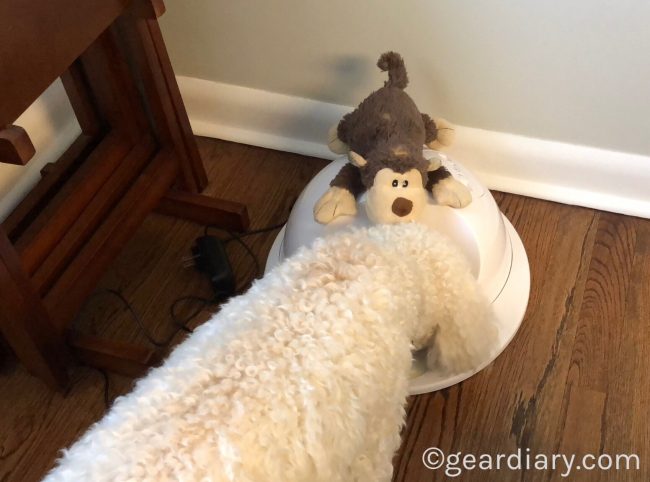 It even got to the point that she would come running when I plugged the CleverPet in, and it made noise. It was clear she now associated the noise (and it is noisy) with the availability of treats.

But she still didn’t fully grasp the idea of the touchpads and lights. 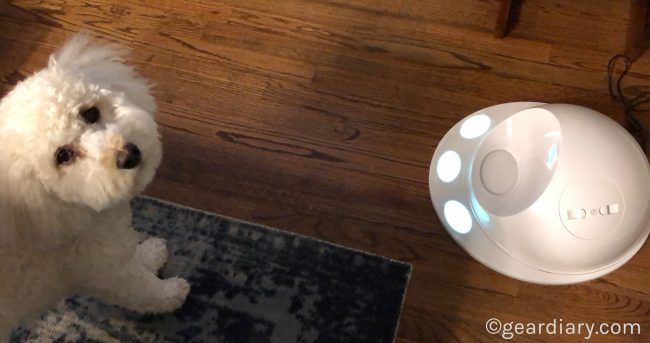 Touching the Touchpads: Through trial and error, your pup’s exploration will become more targeted towards the touchpads. Your dog will learn that pressing the buttons results in a reward.

We eventually decided to “show” her what the touchpads did. We took her paw and placed it on the touchpad. The food bowl rotated, and she was presented with some treats. We did it again, and she was once again able to enjoy a snack. Then we sat back.

After a while, her curiosity got the best of her. She approached the CleverPet and tapped on one of the touchpads. She was rewarded with a treat. A few minutes later she returned and did the same thing. This time, however, after eating her treat she remained at the CleverPet. She seemed confused when she tapped the touchpad when it was not lit and nothing happened. But then, she tapped when it was lit and got her treat. Minutes later, seriously, just minutes later, she would sit and wait for the lights to come on and then tap a touchpad to get a treat.

That was just this morning.

Here’s a video of her progress thus far…

Seeing the Lights: It can take some time, but through daily learning, your dog will begin to differentiate between lit and unlit touchpads! Once your dog recognizes that the lights “mean something”, they’ll be ready for more advanced challenges.

Throughout the afternoon I have heard her activating the CleverPet on her own. She now fully associates the noise and the lights with the availability of treats. We will stay at this level of complexity for a few days and then get to the next level.

So that’s our experience with the CleverPet thus far. Nava went from being upset by it to understanding that when the lights are on she simply needs t tap a touchpad to get a treat. I’ll be doing a follow-up review when she has moved on to more complex activities but, for now, suffice it to say that Raina and I are quite pleased with Nava’s new toy.

If you have a dog (or more accurately, there is a dog who has you) and you want to give them some challenges and stimulation, you will want to check out the CleverPet. We’re having a lot of fun watching Nava learn to use it and, I think, she’s pretty happy with it too. At $299, the CleverPet isn’t inexpensive but, if you love your dog, it is really something you might want to look into. Check it out here.

What I Like: Company explanation of how to get started was spot on for Nava; Fun for humans and dogs alike; increases complexity as the dog learns to master each level; Based on real science; App lets you control and get remote information on your dog’s progress

What Needs Improvement; Pricey Rather noisy when it is loading more treats into the bowl