While at IFA, I had a chance to check out the JBL Boombox, their largest and most powerful portable speaker to date. Available in forest green or black, the Boombox offers a 20,000mAh battery, best in class sound, and up to 24 hours of battery life. Most importantly, it probably sounds better than most home stereo speakers. 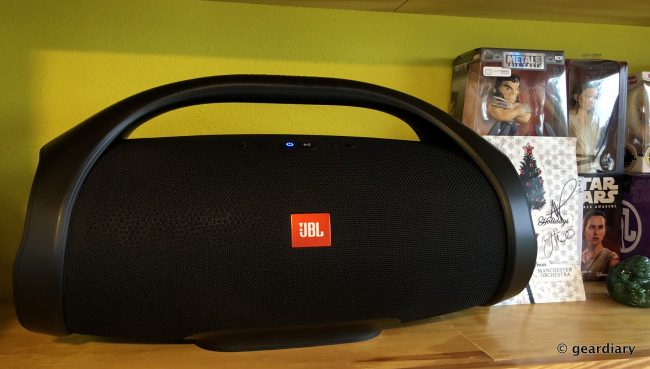 You might recall that up to this point, my favorite portable speaker ever has been the also larger than normal Harman Kardon Go+Play — that’s the speaker that replaced the Zeppelin Wireless in my living room. Even though the Go+Play is technically portable, I’ve never really used it outdoors or taken it anywhere. It simply didn’t seem as rugged and sturdy; the JBL Boombox addresses this issue.

At $449, it’s a reasonable expectation that the JBL Boombox had better bring something amazing to the table, and I’m happy to say that the Boombox does not disappoint.

Let’s talk about what’s in the box, then we’ll jump into the review. 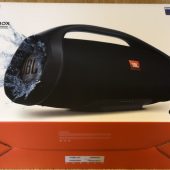 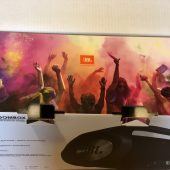 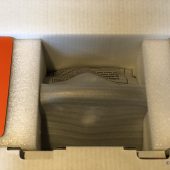 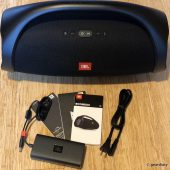 The Boombox is a beast; it weighs about 11 pounds, and it is approximately 19.5″ long by 10″ tall (including the built-in handle) by 7″ deep. As you can see, I received the black version which will look good just about everywhere — indoors or out.

The built-in handle makes it easy to grab the Boombox and go!

On the top of the Boombox, there is a strip of six buttons: Bluetooth, volume down, power, the JBL Link button, volume up, call answer/play/pause. Yes, you can use this speaker as a speakerphone. You can also program the play button to work with Siri or Google Assistant if you’d like — you just have to download the JBL Connect app from the Google Play or Apple App Store, and tell it what to do. You can also use that app to facilitate connecting multiple JBL speakers together for an even bigger sound.

On the lower back of the Boombox, you’ll find the toggle button for indoor or outdoor sound mode (two modes that optimize the music for the conditions in which you are listening). Next to that is a waterproof cover that hides …

… an aux-in port for devices that don’t have Bluetooth, a USB-out charging port, a microUSB port (for firmware upgrades only), another USB-out charging port (that’s right, you can charge up to two devices at the same time from the Boombox’s 20K mAh battery), and the power port. 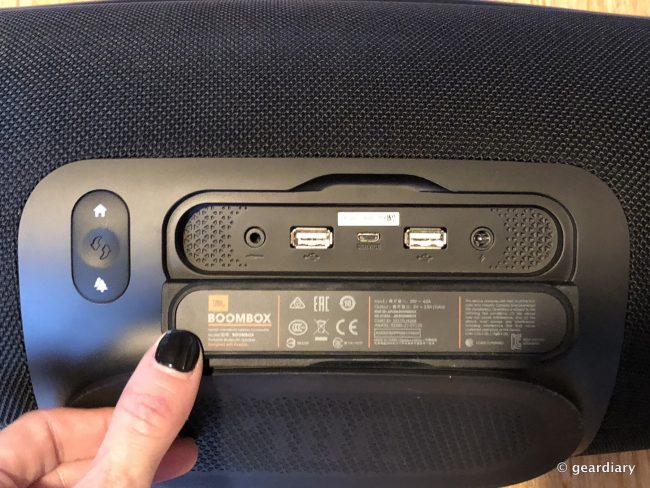 The newest member of the JBL portable speaker family delivers a serious punch while setting a new benchmark in party sound via Bluetooth streaming. It’s also the biggest portable speaker available, weighing in at over 11 pounds (5.25 kg) and nearly 20 inches (50 cm) long. The speaker’s large frame is equipped with four active transducers and two bass radiators, providing powerful sound and bass in a substantial—but portable—package.

On the bottom, there is a big rubber ring around a metal mesh grille for stability when the Boombox is sitting. There are five LED battery indicator dots built into the front; so as the Boombox is charging the LEDs will blink white and then gradually glow white as the battery fills.

There are subwoofers on both sides of the Boombox. 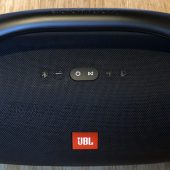 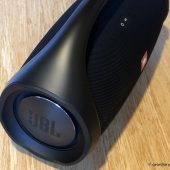 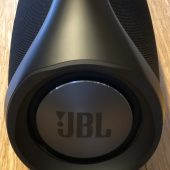 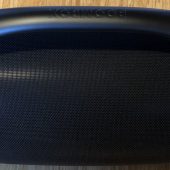 So, we’ve established that the JBL Boombox is big, has a huge battery, is IPX7 Waterproof, and yet it’s still portable … but how does it sound?