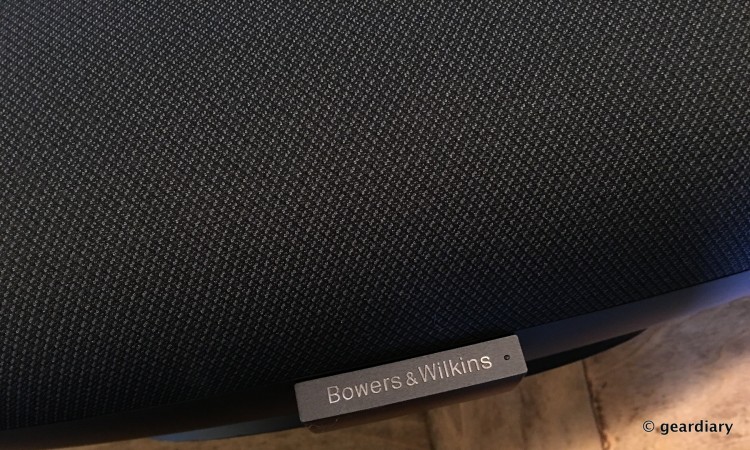 Like the original Zeppelin and the Air, the new Bowers & Wilkins Wireless retains the pinched oval shape reminiscent of the rigid Zeppelin airships from the early 1900s. Building upon the success of the two previous models, the Wireless has gone through a “radical redesign” and it now features “state-of-the-art Hi-Fi technologies coupled with seamless wireless connectivity.”

The first thing you’ll notice is that there is no longer a dock built into the front of the speaker. There’s no need for it, as the Zeppelin Wireless now takes full advantage of Bluetooth, Spotify Connect, and Apple’s AirPlay. In other words, it will work with nearly every music-producing device available today without the need of connecting wires, although the option of using an auxiliary cable is still there for those of us who still have iPods or other non-wireless capable devices.

But as usual I’m getting ahead of myself, so let’s look at the hardware, and then we can talk about how it all works.

Included in the box are the approximately 26″ long by 7.5″ wide by 7.5″ deep Zeppelin speaker (it weighs over 14 pounds!), a power cable, and warranty paperwork, a user manual, and an invitation to enjoy three months of “exclusive album downloads, free from the Society of Sound when you register your new Bowers & Wilkins purchase online.” 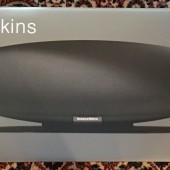 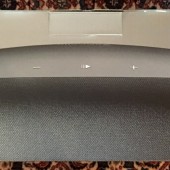 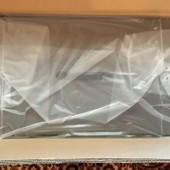 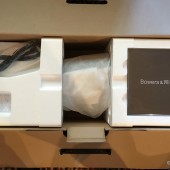 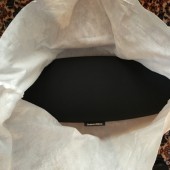 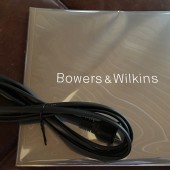 The front of the Zeppelin Wireless is a wide expanse of unbroken black speaker mesh coupled with a black cabinet. The style is iconic, and I think it would look beautiful in any style home or office.

The front bottom has a small Bowers & Wilkins badge that serves to brand the device, but it also hides the Bluetooth LED, the indicator LED, and the Auxiliary LED. 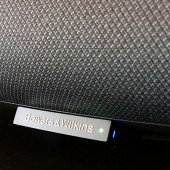 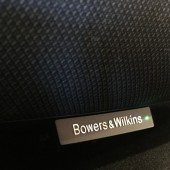 On the back of the speaker box there are three buttons, volume up, play/pause, and volume down. The Zeppelin Wireless is fully controllable from the device driving the speaker, but this is convenient when you’re next to the speaker and not its source. 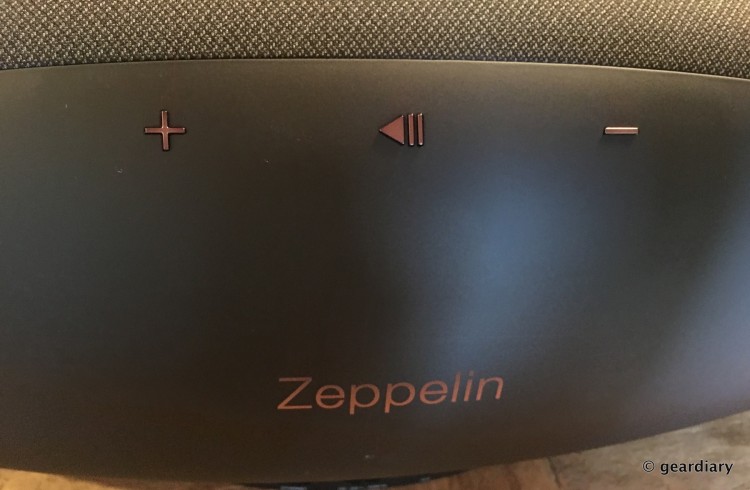 The bottom back of the Zeppelin has the power button, an ethernet port, the power port, an auxiliary port, a microUSB service port, and a reset button. Why would a speaker have a reset button? It somes in handy during setup, as I found out.

Let’s talk about what’s inside the speaker. The Zeppelin Wireless is 50% thicker than the previous model; it has been reinforced to “unwanted cabinet vibrations.”

In the center, there is a 150mm subwoofer which uses an “ultra long-throw voice coil, for deep, clean bass even at high volumes.” 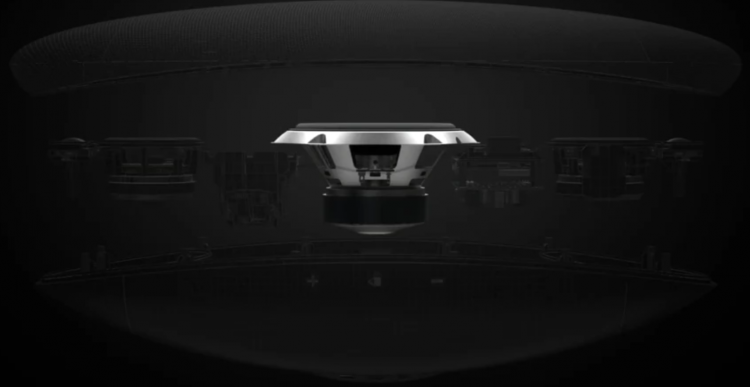 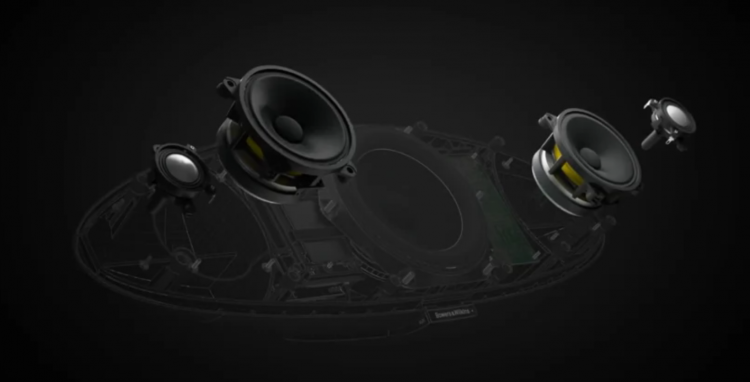 The Zeppelin Wireless has digital signal processing which is “now twice as powerful, capturing more of the detail in the audio signal.”

The first time you use the speaker, it will enter network connection mode; the LED next to the B&W badge on the bottom front will blink green, and that’s when you’ll use either your computer or your iOS device to connect the speaker to your network. 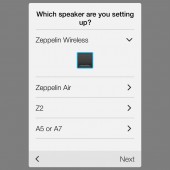 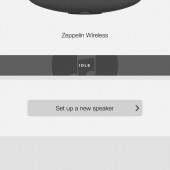 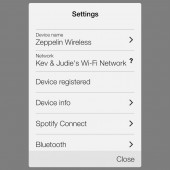 If for some reason you mess up while doing your initial connection (raises hand), you can simply press the reset button on the back for several seconds and then start over. Set-up is very easy, once you’ve connected the speaker to your network, you’re set. Any device in your home that uses Bluetooth, Apple AirPlay, or Spotify Connect will now be able to “find” the speaker and connect to it.

Now let’s talk about performance because that’s where the Zeppelin Wireless made me a true fan.

As one would expect from a 14+ pound speaker (which requires two hands to pick it up and move it anywhere), the Zeppelin can crank out some serious, magnificent sound. With absolutely no tinkering with any equalizer settings, music played from my iPhone, iPad, Huawei Mate S, MacBook, and Dell XPS sounds absolutely fantastic. Whether you need background music playing quietly as you work (as I am doing while I write this review), or providing deep, loud (yet distinct) house-filling thumping music for a weekend party, the Bowers & Wilkins Zeppelin Wireless does not disappoint.

I’ve tested the Zeppelin Wireless with rap, pop, symphony, alternative, spoken word, even the random jazz song, and the sound has absolutely blown me away. Vocals are pure and clear, the bass is driving without bottoming out or overpowering the music. Even when listening to a song that is guaranteed to bottom out when played loud — like Nine Inch Nails’ “Down in It” with its pounding bass line — the sound processor kicks in and makes the music sound amazing! An EDM song like the Presets “Kicking and Screaming” that would ordinarily be a challenge at loud volumes for any other speaker is capably handled. I’m completely impressed by the Zeppelins’ excellent handling of vocals in the midst of bass sounds that might otherwise have been overwhelmed; I have not been able to get the bass to bottom out or make the sound distort at even the highest volumes! The Zeppelin Wireless is one of the purest sounding speakers I have ever tested, and in case it’s not obvious by now — I am blown away. This is a speaker that works in every situation with every type of music.

If you are considering investing in a single wireless speaker that can function as your main sound system, this is the one. At $700 it is an investment, but I feel like the Zeppelin Wireless delivers comparable sound to what one might expect from a larger (and likely more expensive) wired speaker setup.

The Bowers & Wilkins Zeppelin Wireless Speaker retails for $699, and it is available directly from the manufacturer and from other retailers including Amazon [affiliate link].

What I Like: Absolutely gorgeous design that looks good in any location; The built-in sound processor makes music of any kind sound pure and detailed no matter what volume; Easy connection to Bluetooth, AirPlay or Spotify Connect, with aux in for non-wireless audio sources; Your audio device is the remote, so there’s not yet another remote to keep up with