There are a lot of ways to become fit and healthy, and some give your wallet as much of a workout as your body. There’s a new startup, Tonal, that aims to be the “Peloton” of strength training. But you can get the same or a better workout for significantly less. 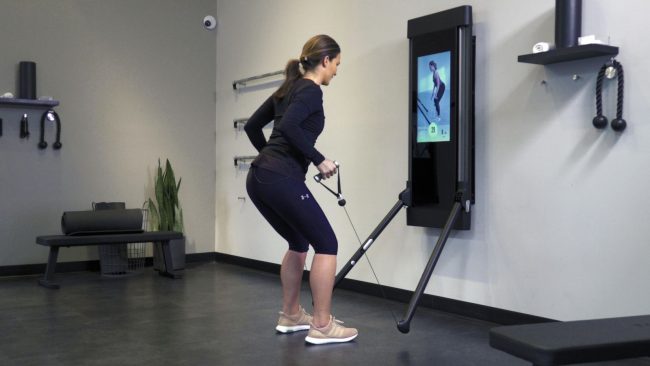 Tonal is apparently quite the complex setup. It’s a monitor with straps attached, and the computer uses electromagnets to create resistance instead of using physical weights. It monitors your workouts, offers personalized advice, and costs almost $3,000 — plus there’s a monthly subscription. But hey, it looks pretty!

Look, Tonal will probably get you into good shape. But it’s insanely expensive, and frankly overcomplicates the act of working out far more than is needed. You can create a home workout system for less than 1/3 of the cost of a Tonal, which would leave you plenty of money to hire an ACTUAL personal trainer to physically show up and help you.

If you’re looking for a compact way to work out, you can pick up a TRX/Jungle Gym XT/plain old gymnastics rings. These can be suspended from an anchor point, hung off a pull-up bar, or suspended using a door to secure them. Once they’re set up, you can do everything from lunges to push ups, pull-ups, even dips depending on your setup. Assuming you pay full price for a pair of straps, figure these run around ~$100 for straps and around $40-50 for a really good pull-up bar if needed.

If you’re looking to just generally get into shape, spend a few hundred dollars on some kettlebells and pay a certified trainer for some basic instruction (as in, someone with a Strongfirst or RKC certificate, not the random trainer at the gym. Your lower back will thank you). Pick up a copy of Simple and Sinister, or follow a similar plan, and you’ll end up in great shape and have a phenomenal grip strength. Plus, again, kettlebells are portable and can be found for fairly cheap if you shop around.

Those are two very simple and FAR less expensive options for getting into shape at home. If you want the equivalent to a Tonal, you’re looking for a cable-based home gym. The following are going to be bulkier than a Tonal, but they’re also going offer a ton more exercises plus the option to increase their weight capacity. A cable gym might offer 210 pounds as a baseline, but they can often be purchased with up to 400 pounds. Tonal is capped currently at 200 pounds, though that might be a software restriction. Still, you could even spend $2,000 on a Bowflex with a high weight capacity instead.

The Tonal website isn’t clear about what exactly you can do on their machine, but they do spend an awful lot of time talking about how much better looking it is than other home gym options. I mean, I know I try to be freshly showered and dressed nicely for my rowing machine — can’t have the home gym equipment judging me, right? Seriously though, do these people keep their home gym in their living room? [Based on the above video, apparently they think people work out in their living rooms, a half-finished house, and a baby’s room — all places I know I like to store expensive gym equipment]. I have a 2 bedroom condo, and not once did aesthetics cross my mind when I bought my rower. Because it lives in my bedroom for workouts; it’s not a centerpiece of my interior design!

I’m also very skeptical because the few times Tonal does address workouts, they seem to be heavily influenced by broscience. Specifically, it suggests that the digital spotter built into Tonal will let you grind out more reps by lessening the resistance if you struggle. That’s … a very specific outlook, and the source of a lot of debate. Many well-respected strength coaches (Jim Wendler, Dan John, Pavel Tsatsouline) emphasize the importance of NOT lifting to failure. You don’t have to max out your effort every. single. workout. So either the Tonal is pushing users to go beyond where they can comfortably operate, or it’s ego lifting for you by making it easy to get more reps in, even if you can’t do the full weight. Either way, that’s not a selling point in my mind. That doesn’t help me develop any real-life strength; my groceries aren’t going to lighten themselves when I get tired, my kid isn’t going to get magically lighter the more I carry him, so I’d want to know a lot more about how this spotter system works.

The crux of my issue here is really that Tonal is a solution to a problem that isn’t there. Strength training has long been resistant (no pun intended) to technological disruption because strength training is pretty basic. You lift heavy things, and you get stronger. This has been the case since the first caveman hurled a rock at his prey. No equipment? Do push-ups on the floor and dips off the bed frame. No time? Do a half-dozen push ups several times throughout the day. Need to carry heavy boxes with ease? Pick up a kettlebell and do swings and loaded carries. None of this requires anything special. You need a plan to progress, but, again, there’s a reason most plans are variations on reps and set ranges. The actual act of getting stronger still requires the basics of muscle and movement. Anything that doesn’t translate to real-world strength isn’t useful to the average person, and there are a plethora of resources out there to get you stronger without the hassle or expense of Tonal.

People don’t use Peloton because they’re planning on riding Tour De France, they don’t use Concept2 rowers because they’re on their way to row the Thames, and they aren’t generally running on treadmills in anticipation of the Olympic marathon. But strength training is different because there’s a direct correlation between lifting properly and being stronger. Spinning won’t make you a pro cyclist, but it will improve your overall cardio endurance. On the other hand, if Tonal isn’t making it hard enough to work out, you’re not going to get any benefit. With anything regarding resistance training, you get out what you put in. There aren’t any shortcuts. On the other hand, unlike cardio equipment, there’s a cap as far as “you get what you paid for” — there’s a point where equipment quality is a matter of preference, not a necessity. And seriously, $3,500 is a significant sum above and beyond just about any home strength equipment. It’s also the equivalent of 29 years of membership at Planet Fitness at $10/month, just as a comparison.

So yes, Tonal probably works fine … but you’re overpaying by a lot for no additional benefit.