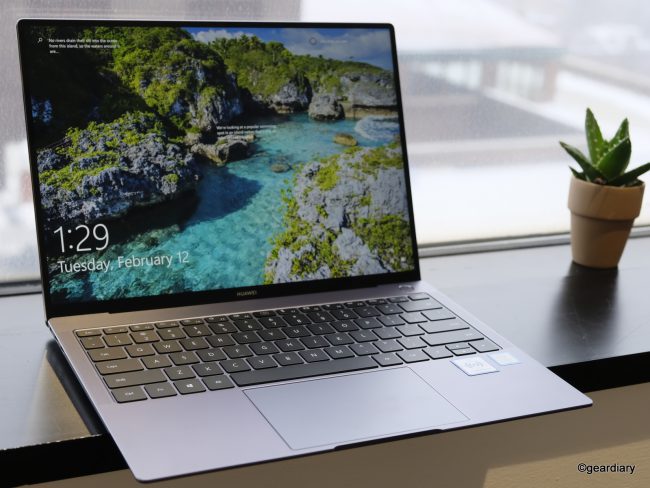 If you read my Huawei MateBook 13 review, you’ll know that I am a huge fan of the 3:2 aspect ratio on a laptop’s screen. If you are, too (or even if you’re just curious about it), you’ll want to check out the updated MateBook X Pro and the brand new MateBook 14. 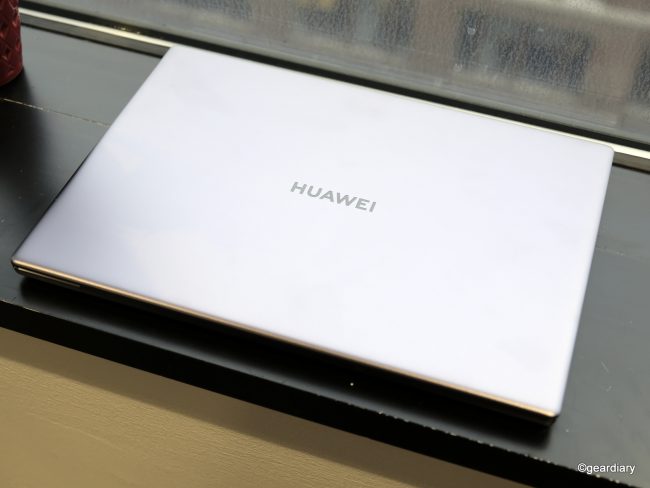 We recently reviewed Huawei’s new MateBook 13, but the update many have been waiting for is the followup to last years MateBook X Pro. Described as Huawei’s answer the MacBook Pro, the MateBook X Pro has just received a major update that includes a faster processor, upgraded discrete graphics, and more.

If you liked the style of last years MateBook X Pro, you’ll appreciate that Huawei has stayed true to it. They’ve refined the design of the CNC cut and sandblasted aluminum unibody, however; the logo is sleeker  — the flower is gone, and it just says Huawei now. There is one big refinement that I’m excited about — the 13.9″ MateBook X Pro will now have the 3:2 aspect ratio that I liked so much on the MateBook 13. The FullView Display will offer a 91% screen-to-body ratio with 3000×2000 resolution at 260 ppi.

As you might expect, considering that the MateBook 13 has it, the MateBook X Pro has been upgraded with the latest 8th gen (Whiskey Lake) Intel i8565U processor; it also has an Nvidia GeForce MX250 discrete graphics card with 2GB, and you’ll be able to configure your laptop with up to 16GB RAM and up to a 1TB SSD.  The laptop also has an upgraded Huawei Shark Fin Fan 2.0 system, which they say is 20% more efficient than the one on last year’s model.

Last year’s MateBook X Pro featured the 2-in-1 power button that also served as a fingerprint scanner; we saw it again in the MateBook 13, and it is still present in the new MateBook X Pro. One thing that I wish they hadn’t kept from last year’s MateBook X Pro is the hidden keyboard webcam. While I loved that the popup cam was that it was a great privacy feature, but below-chin webcams are never flattering. I would have rather seen a slightly larger (by a couple of mm, anyway) top bezel with a webcam as we saw on the MateBook 13.

Huawei is saying that we can expect up to 13 hours battery life for video playback, up to 14 hours when using office apps, and up to 12 hours for surfing. 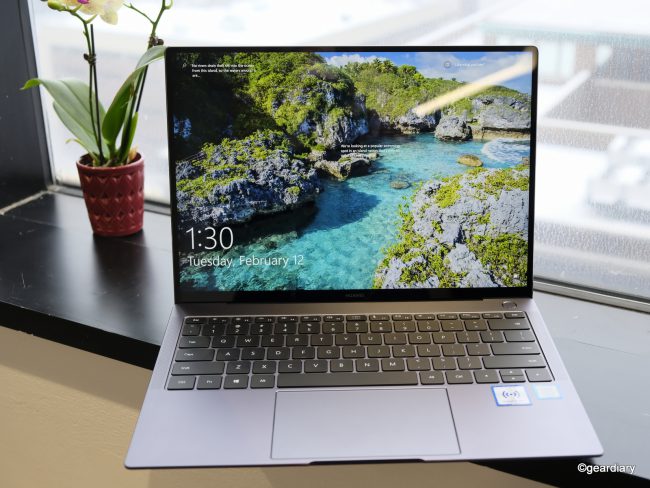 The MateBook X Pro now has Bluetooth 5.0 and Wi-Fi supporting speeds up to 1733Mbps. There are two USB Type-C ports and a USB Type-A (3.0). There is also a full-speed Thunderbolt 3.0 port for those of you who want to connect a 4K monitor or external graphics card. If you like waking your computer to ask Cortana something, you’ll appreciate the quad-mic, which can detect your voice from up to 13 feet away — without you having to yell.

If you are also using a Huawei mobile device, like their excellent Mate 20 Pro, you’ll appreciate that the MateBook X Pro has baked in some apps that will add value when you are using a Huawei mobile device.  Similar to the way a MacBook uses Airdrop to communicate with an iPhone, the MateBook X Pro will have OneHop, which will allow you to instantly transfer photos, videos, and documents between laptop and phone at speeds up to 30Mbps. There’s also a cool new Clipboard feature which allows you to copy text on one Huawei device which will then be available for pasting on other nearby Huawei devices, and the cherry on top is how you can swipe with three fingers and easily create a screen capture.

GPU
NVIDIA GeForce MX 250 with 2GB GDDR5 on the i7 version; Intel UHD Graphics 620 on the i5 version 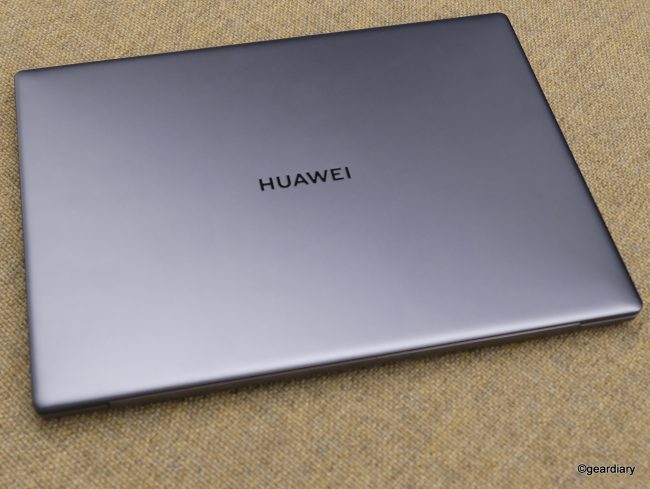 For those who think that a 15″ laptop is too big but a 13″ laptop is too small, Huawei has a Goldilocks device for you in their new MateBook 14. Priced to be more affordable than the MateBook X Pro starting at $1199, you’ll still get the aluminum CNC unibody design with the sandblasted finish and great performance, as well as a 14″ FullView display with a 3:2 aspect ratio, and a 90% screen-to-body ratio. The resolution isn’t quite as great as the X Pro’s, however, at 2169×1440 with 185 ppi. They removed the flower from the top of the Huawei logo on the MateBook 14, too, so that means last month’s MateBook 13 is now a collector’s item, right?] 😉 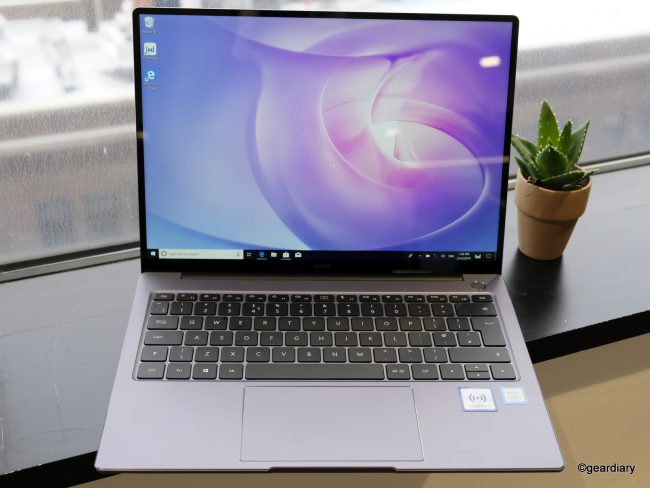 The MateBook 14 has the same 2-in-1 fingerprint reader and power button as the X Pro and the MateBook 13, but they opted to “go Pro X” by recessing the 1-megapixel webcam in the keyboard. You’ve probably guessed by now that I’m not a fan of oddly placed webcams that shoot from below your chin, but I do like the privacy aspect of it.

GPU
Intel UHD Graphics 620 on the i5 version; NVIDIA GeForce MX250 with 2GB GDDR5  on the i7 version

Lenovo is claiming a battery life of up to 15 hours for video, up to 14 hours for office apps, and up to 10.5 hours for web browsing. 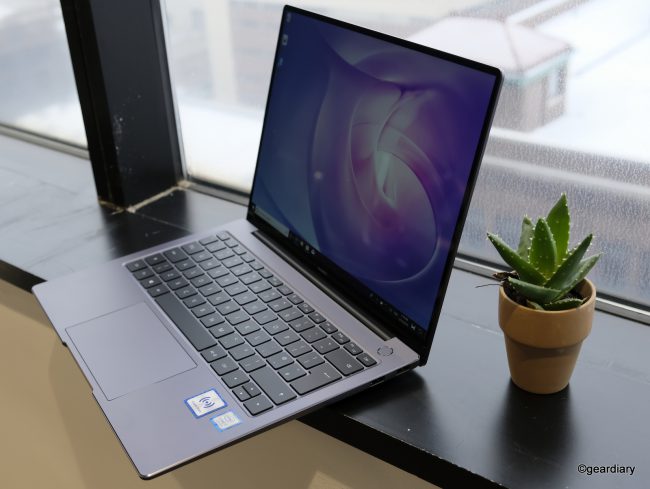