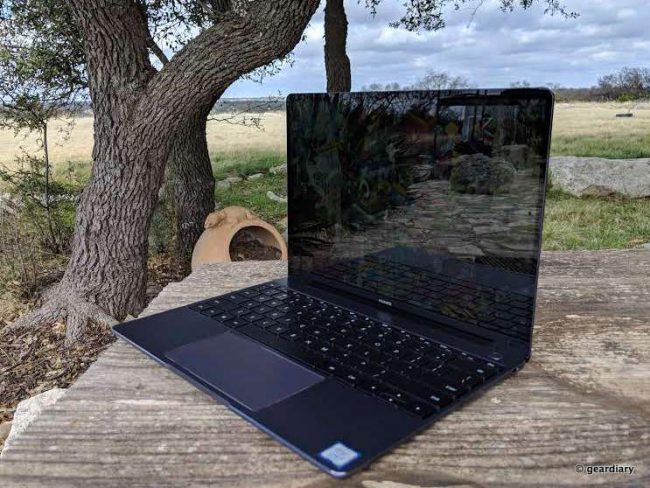 Last year we took a look at the MateBook X Pro, Huawei’s answer to the MacBook Pro for PC users. Now Huawei is taking on the MacBook Air with their Huawei MateBook 13. You’ll be intrigued by its speed, build quality, comfortable keyboard and touchpad, and the narrow bezels on the touchscreen. But there’s even more to like.

The exterior is composed of aluminum, about which Huawei says, “the edges are smoothly curved with 5,252 aluminum chamfers cut with a precise CNC diamond technique and then put through an advanced sandblasting process. The process produces a soft and glossy finish that is a pleasure to feel and see while also helping to withstand abrasions.” The laptop has a very nice matte finish with a raised and textured Huawei logo in the middle of the cover. 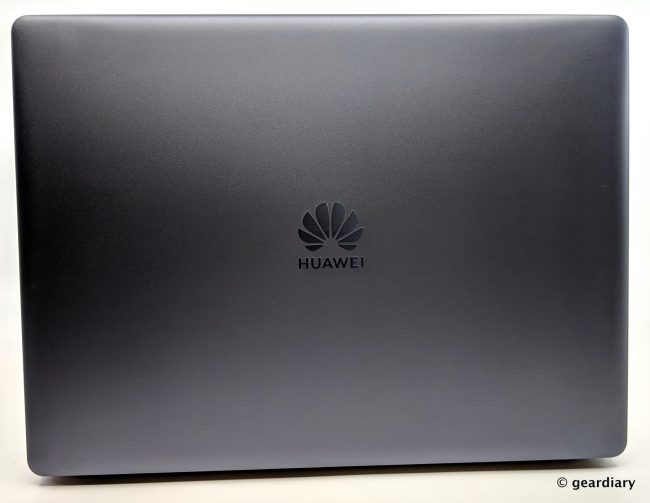 I received an early, non-retail version, so I do not have the final packaging to show you. But all will include a USB Type-C to Type-C cable and a power brick with non-folding wall charger prongs and a single Type-C port. If you use a phone that also charges with Type-C, you’ll like that the laptop’s charger is safe to use on your phone, and if your phone has fast-charge, the charger will safely provide that. 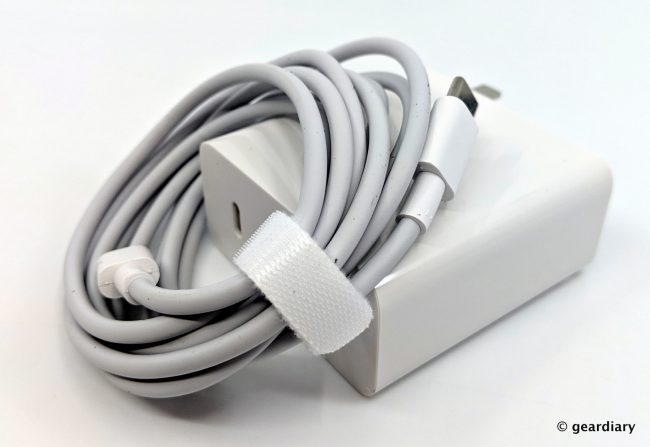 The Huawei MateDock will also be included; it has a USB Type-C port, a Type-C port, an HDMI port, and a VGA port. It’s honestly a nice lagniappe considering that like so many modern laptops, the MateBook 13 only has two Type-C ports. 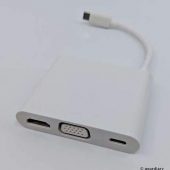 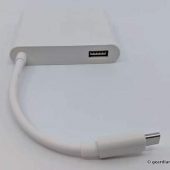 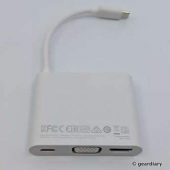 The front of the MateBook 13 has a handy dip in the middle so that you can almost lift the laptop’s lid one-handed. While you technically can lift the lid one-handed (it works about 3/4 of the time for me), the lid is just heavy enough that a single finger on the bottom half makes for a smoother opening.

On the right side, there is one USB Type-C port which supports data transfer and DisplayPort.

The back is almost all hinge. I should mention that the hinge is rigid enough that it will hold the laptop’s lid in just about any awkward semi-closed position (including almost shut but not quite) without closing on its own.

On the left side, there is a USB Type-C port (which supports data transfer and charging), a 3.5 mm headset and microphone 2-in-1 jack, and an LED status light.

On the bottom, there are four round rubber feet to keep the laptop stable. There are also Two speakers on either side; the long perforated bar covers the fan. The speakers sound good enough, but if you want the Dolby Atmos sound, you’ll have to listen through headphones. 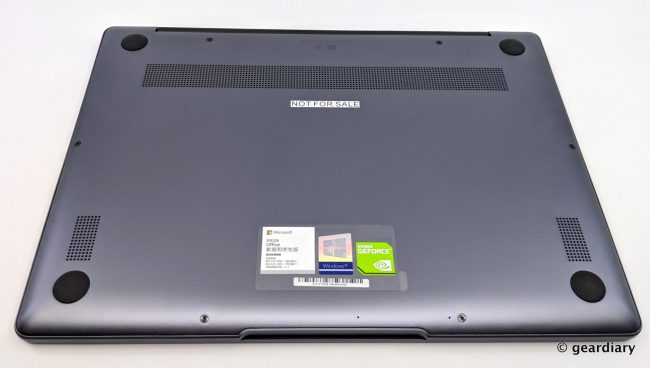 The screen on the MateBook 13 has lovely thin bezels on the sides (~5mm) and top (~7mm); the bottom has a slightly thicker bezel at ~14mm, but it looks proportionate and not too thick. Upon first glance, the display seemed boxier than I was used to, taller perhaps. It turns out that the aspect ratio on the MateBook 13 is 3:2 vs the more typical 16:9 found on most Windows laptops (the MacBooks line is generally a similar 16:10); one noticeable exception is the Microsoft Surface which also comes with a 3:2 aspect ratio. 16:9 is great for watching TV shows and movies as well as general browsing, but it turns out that taller displays are better for viewing and working with documents without squashing a wide-aspect ratio movie to the point where it’s painful to watch. 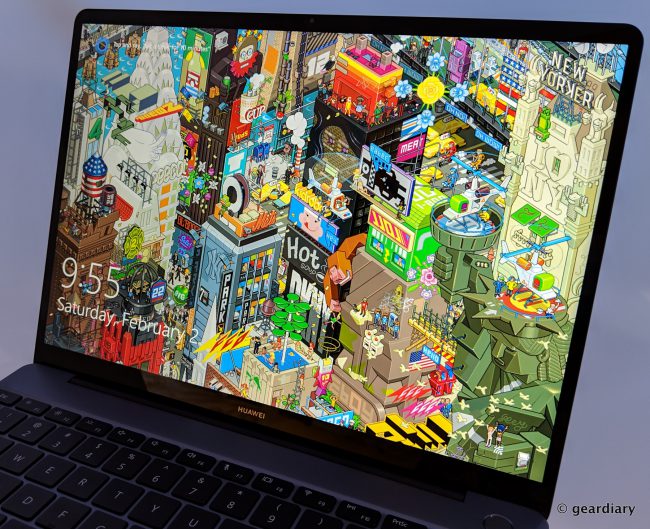 Side note: here is an example of both the 16:9 and 3:2 aspect ratios. Click either one to open the slideshow and see the difference. 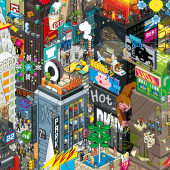 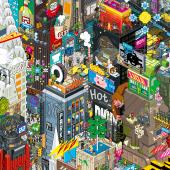 And here’s an example showing the 12″ MacBook on the left and the MateBook 13 on the right. Note that there is a little bit more webpage showing on the MateBook side. 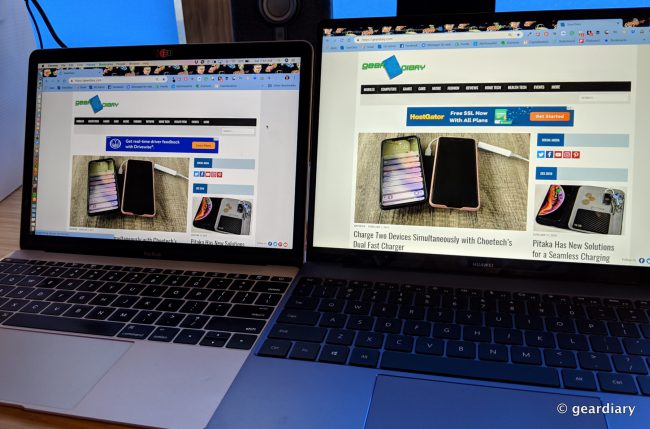 Also, note the thinner top and side bezels on the MateBook 13 vs the 12″ MacBook.

And here’s what it looks like when you are streaming a movie on a 3:2 display; it’s still totally watchable, even if you are a widescreen purist. The glossy screen is bright, beautiful, and a pleasure to use. 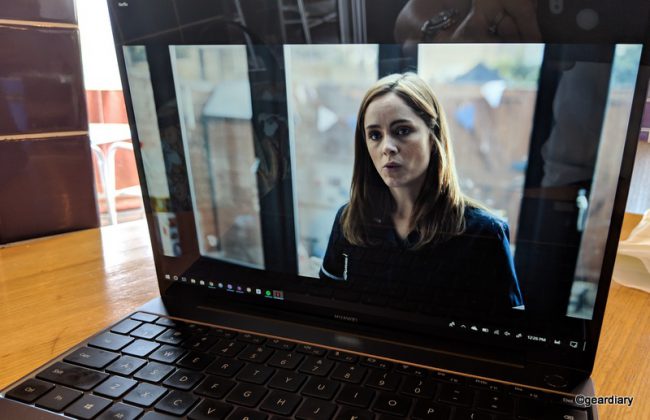 3:2 seems like the perfect aspect ratio compromise for people who need to work on their laptops, yet they still want to be able to enjoy streaming a movie every now and then. Huawei used it on the MateBook X Pro, and I’m glad that it is present on this laptop, too.

There is no physical cover for the webcam, so if you value your privacy, you might want to put a sticker over it. I appreciate that the 1-megapixel webcam is in the top bezel rather than tucked under the display or built into the keyboard. There’s nothing worse than an under-chin cam. 😛 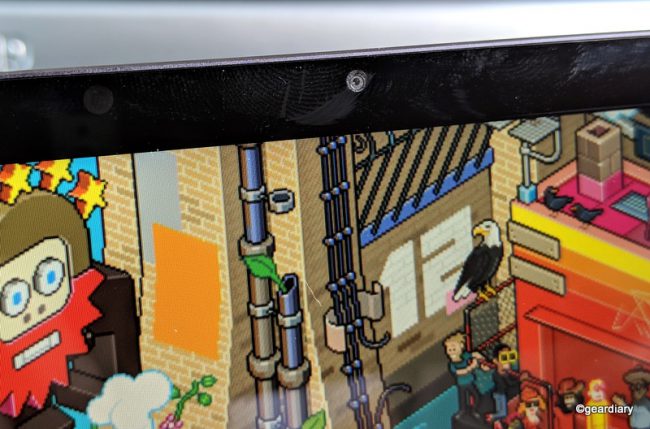 There is a lovely wide touchpad under the keyboard; I don’t think it is glass, but it’s comfortable to use and I like how large it is. I suspect that some might not like the slight bit of resistance or friction generated when using the touchpad, but I didn’t mind it at all. 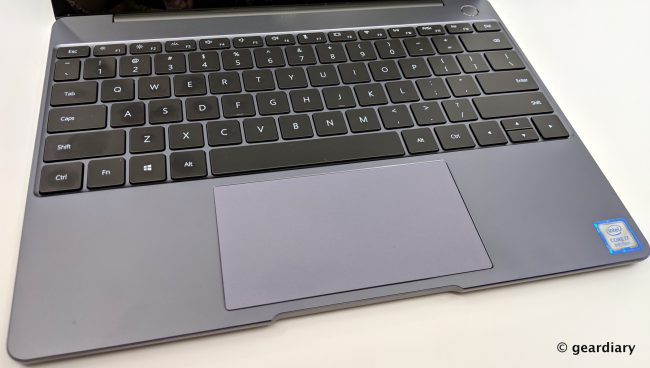 The keyboard is very Mac-like: the keyboard is wide — nearly edge-to-edge; the keys have just enough travel to give satisfying tactile feedback, and they aren’t too clicky. I like this keyboard better than the butterfly mechanism nightmare on my late-model MacBook. The power button, located at the upper right of the keyboard, also serves as a fingerprint scanner; I’ve found it to be a highly accurate and fast way to securely log in. 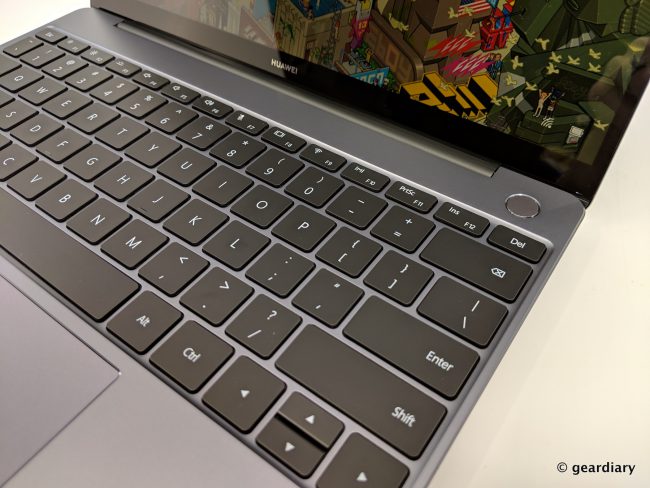 I’m not much of a gamer and I don’t do much video processing, but those who need those capabilities will appreciate that the i7 Huawei MateBook 13 has discrete Nvidia GeForce MX150. I have noticed that even with 30+ tabs open on Chrome, there is no slowdown.

The ultra-slim body carries NVIDIA GeForce MX150 with 2 GB GDDR5. Get up to 4X performance over integrated graphics for image processing and video editing. The graphics are also backed up by 25 W TDP to make video editing and gaming smooth, fast and reliable.

Featuring the new 8th generation (Whiskey Lake) Intel core i7 8565U processor*, it runs 40% faster than its predecessor and 10% faster than the KBL-R processor. In terms of power and longevity, it’s a game changer for laptop technology.

I suspect that there will be some complaints about the MateBook 13’s battery life. Huawei is rating the battery life at about 9.5 hours, and in my testing, I regularly got 7 – 8. This is a couple of hours lower than the Lenovo C930 I just reviewed, and it is a couple of hours less than the MacBook Air is getting. That may be a deal-breaker if you are regularly away from an outlet or external battery pack. The good news is that the laptop has QuickCharge:

The HUAWEI MateBook 13 comes with a pocket charger that’s much more than a charger. It can Quick Charge your laptop and your phone with multi-functional connectors, giving you 2.5 hours of office use from a 15 minute charge*, no matter where you are. It’s fast, eco-friendly and portable; it fits in your pocket and fits your life.

Here are some photos of the MateBook 13 taken outside. Yes, the screen is very glossy, but when you are sitting in front of the laptop the display is easy to view even outside in full sun. 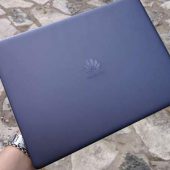 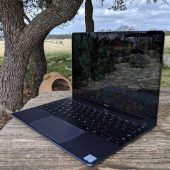 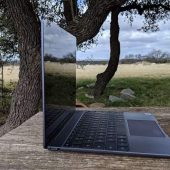 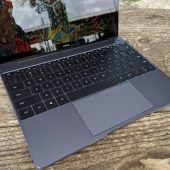 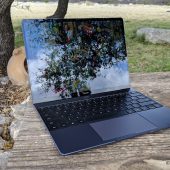 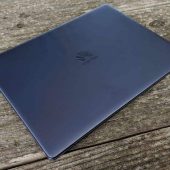 The Huawei MateBook 13 comes with a PC Manager Suite which you can use to scan your hardware for any issues and your software for any updates. You can set it to automatically run when you start Windows or turn it off if you would prefer to do that manually.

To see where the MateBook 13 fits into the market, let’s compare its specs and price with some other popular and similarly configured laptops. Not all brands had a 13″ model, so in some cases, I went with the 14″:

There’s much to like about the Huawei MateBook 13; it is extremely well designed, doesn’t include any bloatware, and it has a gorgeous and practical 3:2 display. If the ability to add extra RAM or to have a ThunderBolt 3 port is important to you, or if you must have longer battery life, then you might want to look at some of the other laptops I mentioned. But for the features offered, the excellent 3:2 display, the powerful processor, the discrete graphics, and the slim and solid build, the Huawei MateBook 13 is an absolute winner.

The Huawei MateBook 13 sells at $999 for the i5 version and $1299.99 for the i7 version. You can learn more about it here; it is available now from Amazon [affiliate link], New Egg, Microsoft.com and Microsoft stores.