Now that spring has sprung and dreams of summer BBQs fill our heads, its time to upgrade your BBQ arsenal. REC TEC Grills has a lineup of pellet grills that are worthy of your investment. Featuring high-quality, durable construction, super-accurate PID temperature controller with Smart Grill Technology, and Wi-Pellet Wi-Fi connectivity, REC TEC offers the best value on the market. 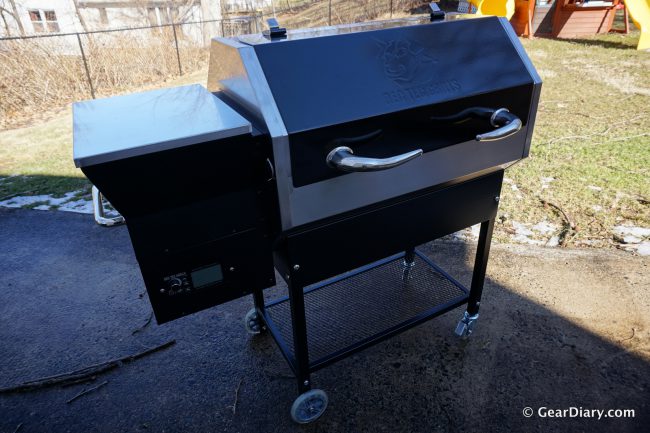 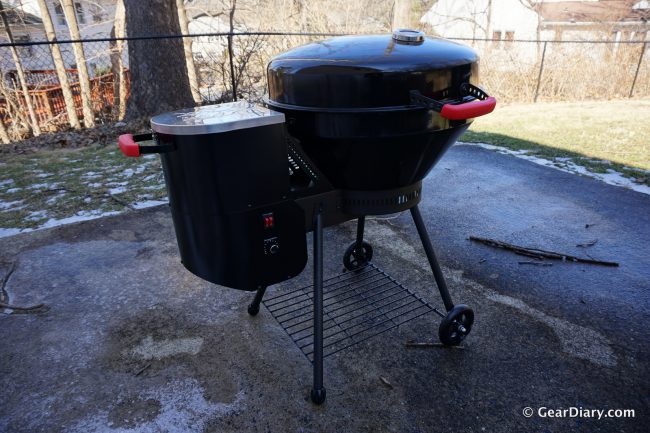 Our friends at REC TEC were kind enough to send us two of their more popular pellet grills for testing and review, the Stampede and the Bullseye. The Stampede is a fairly typical pellet grill in terms of form and functionality, but where REC TEC ups the ante is the construction materials and technology. The Bullseye is an affordable pellet grill that’s shaped like a charcoal kettle grill. The Bullseye uses a simple control system, unlike most pellet grills that use a thermostat; it is versatile enough to cook low and slow, but it can also reach temperatures up to 600F for high-heat cooks like chicken breast, burgers, hot dogs, shrimp, and much more.

REC TEC prides themselves on the high-quality materials they use to construct their grills. They use 304 stainless steel for all critical parts, which leads to a longer-lasting grill that won’t rust from the inside out. They use a ceramic igniter rod that’s rated to last at least 100,000 cycles and a fire pot strong enough that you can park a dump truck on it. REC TEC means business when they say that they build grills meant to last a lifetime, and they back it up with their customer service. How many grill companies do you know send a card that includes the company owner’s personal cell phone numbers? Only REC TEC.

If you’re more of a visual learner, check out my REC TEC Grills review video, below: 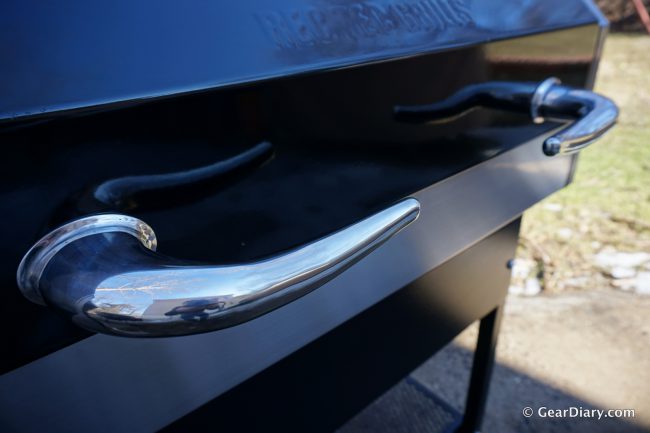 Closeup of the Stampede’s lid and bull horn handles 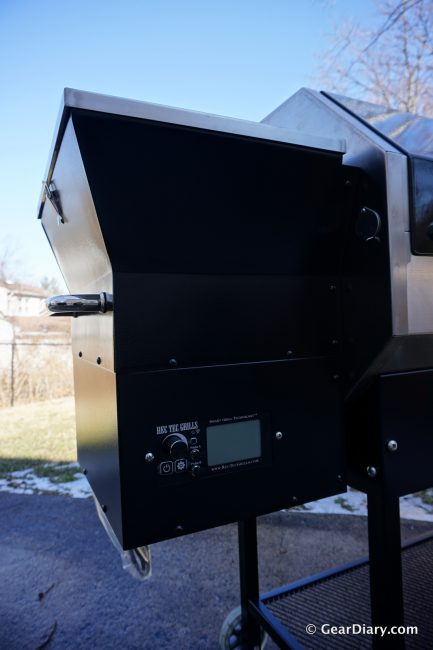 The Stampede has a unique hexagonal shape that provides more headroom than a barrel style grill and the handles are gorgeous bull horn shaped polished stainless steel. It’s built with a stainless steel hopper with stainless steel piano hinge, stainless steel cooking chamber, and stainless steel pull handles. The grill comes with a bottom storage shelf and rollerblade-style wheels and locking casters that helps both move the grill when you want to or keep it in place. The Stampede also features three vent holes evenly spaced on the rear of the grill to allow smoke to escape. This is the only part of the construction that worries me, as it’s possible that snow or rain could get inside during a cook. REC TEC does sell all-weather vent covers that block the vents from the elements, but I feel like these should be included or built into the price. 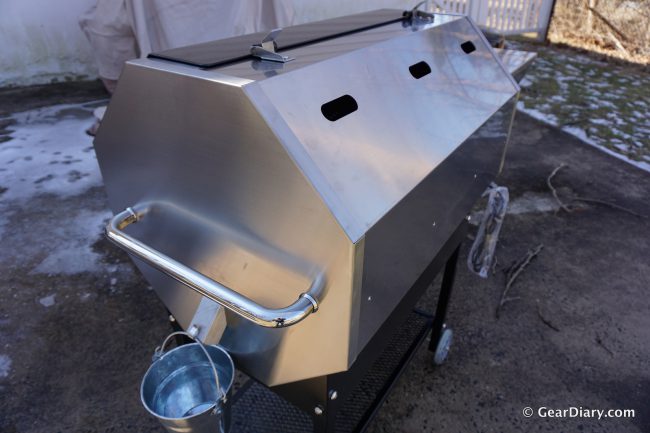 The rear of the Stampede 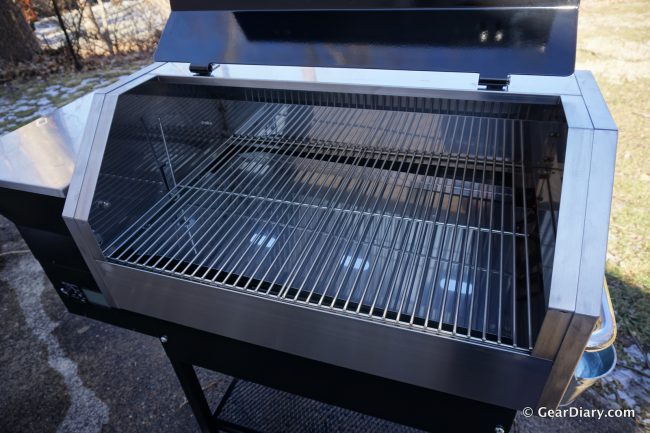 The interior of the Stampede 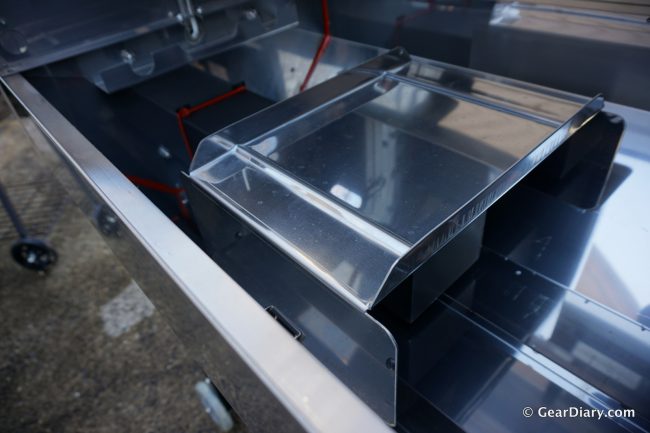 The deflector plate below the Stampede’s drip pan 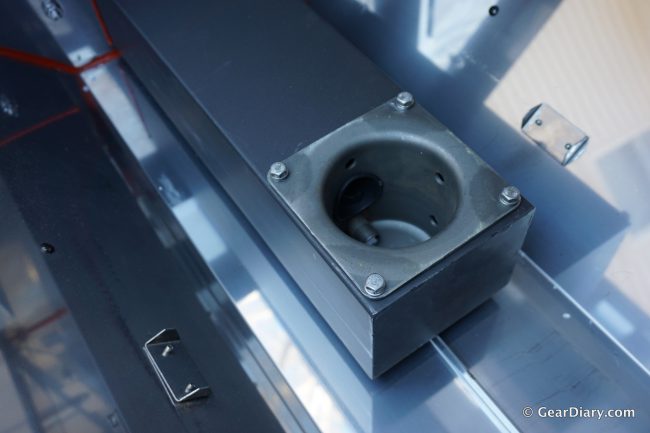 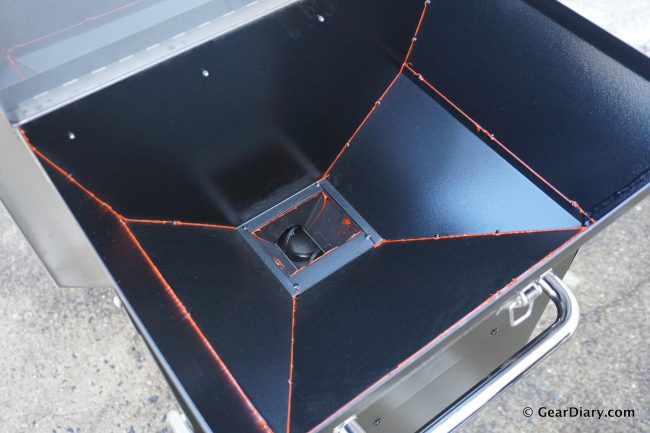 The interior of the Stampede’s hopper

The Stampede comes with REC TEC’s Smart Grill Technology controller, which starts your grill and holds the internal temperature impressively steady. The controller automatically lights your grill and has an automatic shutdown feature that keeps the fan going without adding new pellets to ensure the fire goes out. The controller allows you to set a temperature between 200F and 500F in 5-degree increments while also providing a LO option, 180F for extreme smoke, and FULL setting, which reaches temperatures over 500F for searing. You can also plug in two meat probes (included), which allows you to monitor two cooks simultaneously. 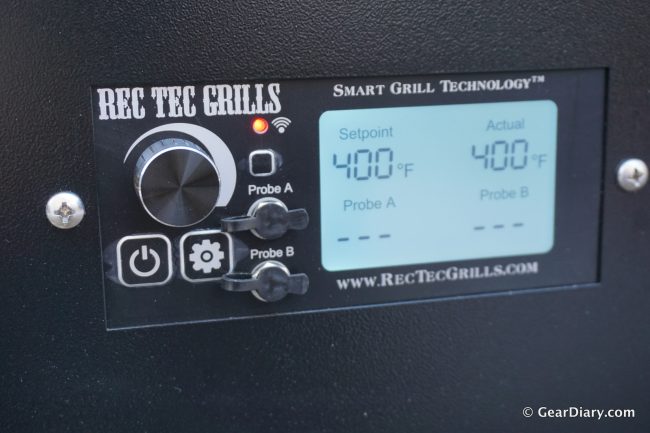 A closeup of the Stampede controller display 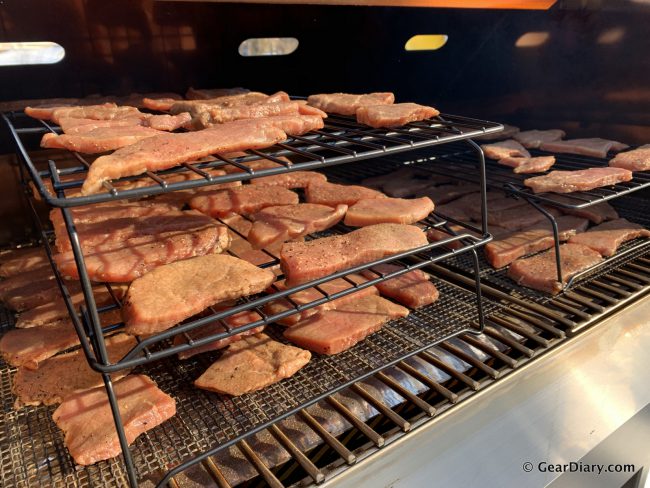 Beef jerky on the Stampede 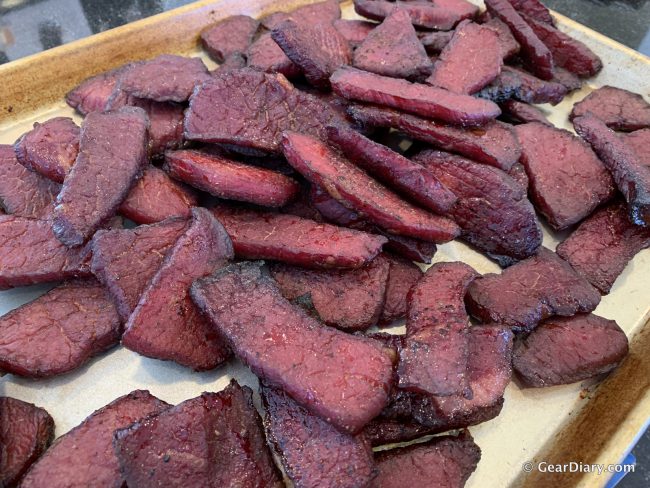 I used the Stampede for a number of cooks during testing, including baby back ribs, beef jerky, and homemade pastrami. The Stampede is extremely easy to use, fits a good amount of food, and imparts a delicious wood flavor into the meat. At the LO setting, which is 180F AKA “extreme smoke”; my beef jerky got a huge amount of smoke flavor, which my friends and family really enjoyed. I was really surprised at how well the PID controller maintained the temperature inside the Stampede. Over a 5+ hour long cook, the grill stayed rock steady at 180F even while the ambient temperature outside was below 32F. 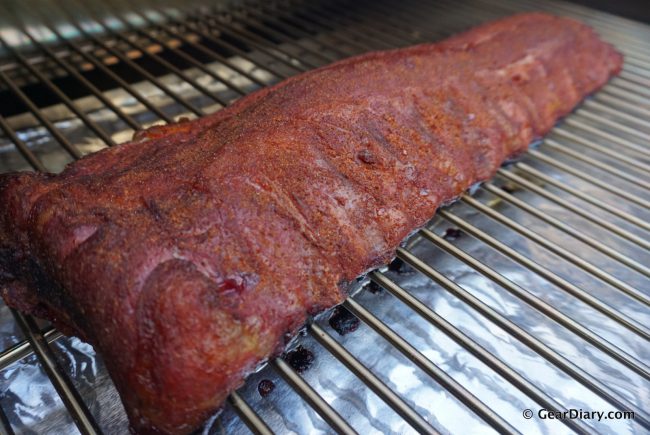 Baby back ribs on the Stampede 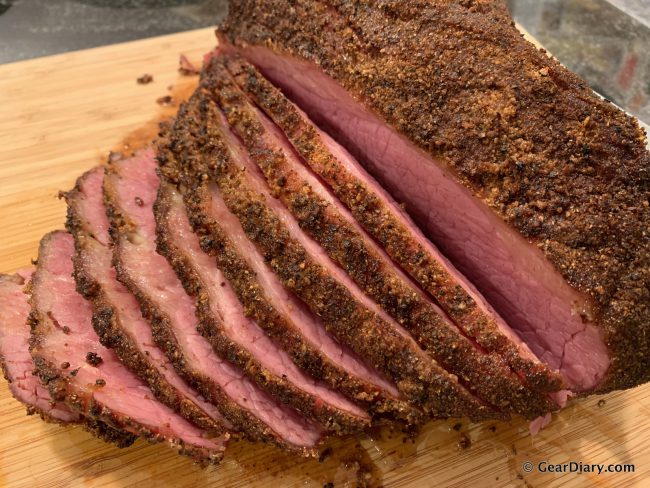 Homemade Pastrami from the Stampede

The fact that I could monitor my cooks from inside, thanks to REC TEC’s Wi-Pellet functionality, was a blessing during days where the temperature dipped below freezing. It’s a gorgeous grill that’s simple to use, built to last, and makes amazing food. What more can you ask for? At $899, it’s a great value for the size, features, and craftsmanship. 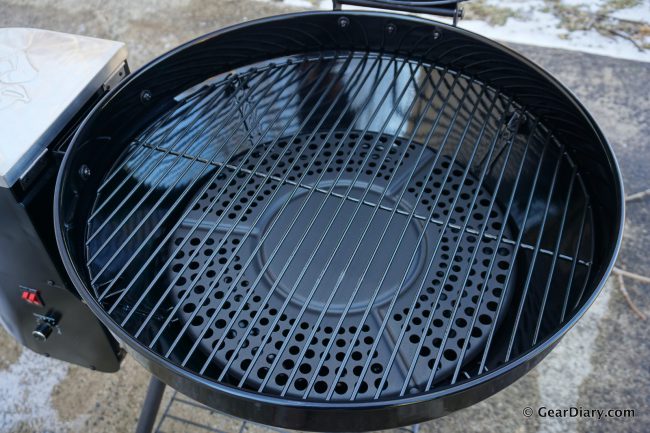 The interior of the Bullseye 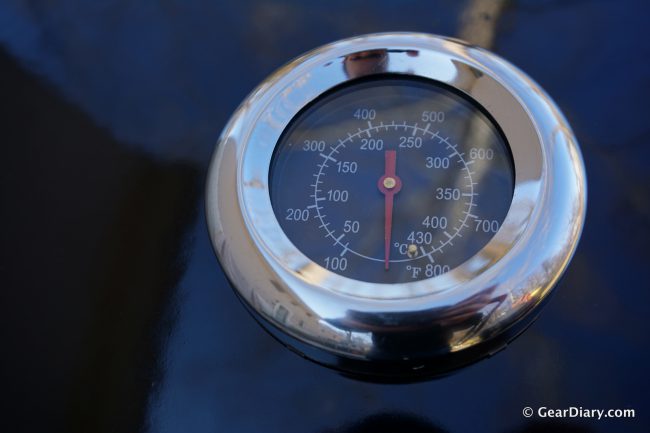 The REC TEC Bullseye is a fairly new innovation in pellet grills. It’s a pellet grill that performs like a charcoal grill. The Bullseye is billed as a grill that gives you the flavor of a wood fire without the hassle of charcoal.  It’s the first pellet grill that allows you to be able to cook with the lid open. The Bullseye uses a simple control knob and two switches to operate. The “power” switch turns the fan and auger on, while the “ignition” switch, controls whether the igniter is on or off. The knob controls the wood pellet feed rate, which is how you control the grill temperature. 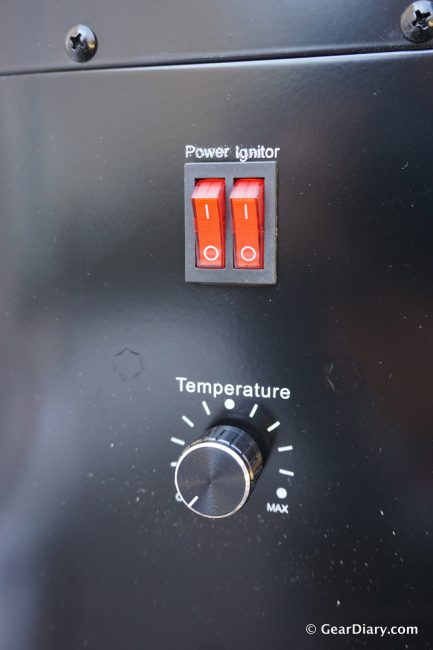 Close-up of the Bullseye’s controls 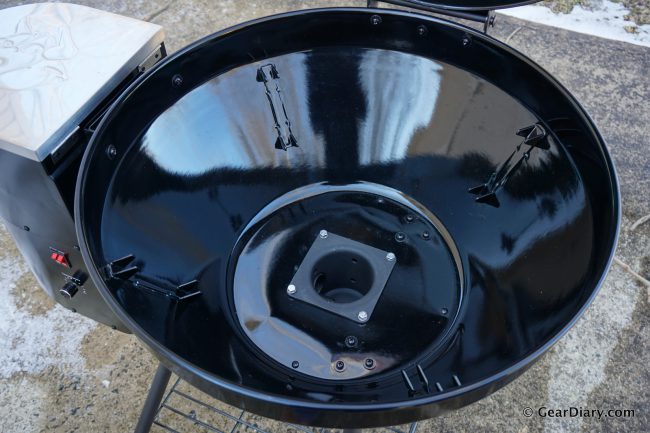 The fire pot underneath the cooking grate and deflector shield 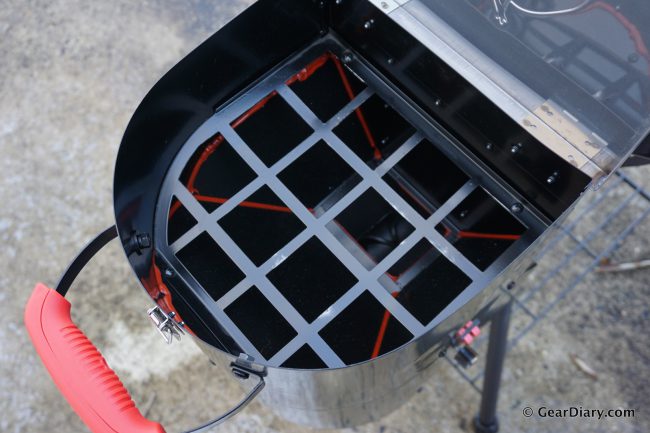 The inside of the Bullseye’s 15 pound capacity hopper

There is a dome thermometer on top of the baked-on porcelain enamel lid that gives you a good indication of the temperature inside the grill. The main complaint with dome thermometers is that they detect the temperature at the top of the grill, not necessarily at the level where the food is cooking. The Bullseye has a 15-pound capacity hopper, which allows you to cook up to 15 hours at 200F. REC TEC states that the Bullseye can cook anywhere from 200F to 550F, but I witnessed temperatures reaching almost 600F when preheated on high for about 20 minutes. 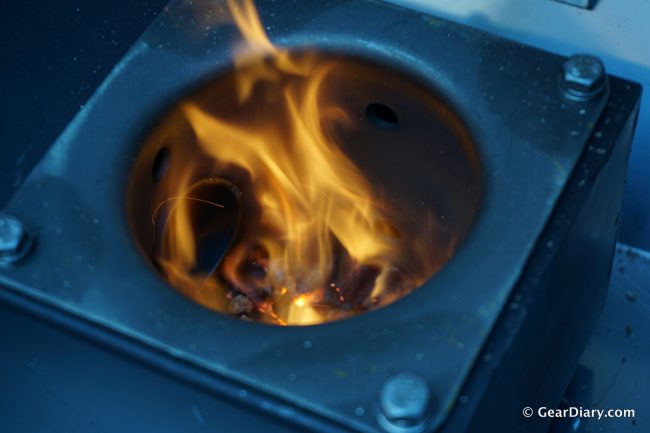 Close-up of the fire pot in use

The Bullseye uses REC TEC’s standard indestructible fire pot and their HotFlash ceramic ignition system, which is the same as the Stampede. The Bullseye provides about 380 square inches of cooking area on porcelain coated cooking grates, which give great sear marks. Since it’s a smaller grill, it preheats to 400F in about 10 minutes, which means less waiting and more cooking. 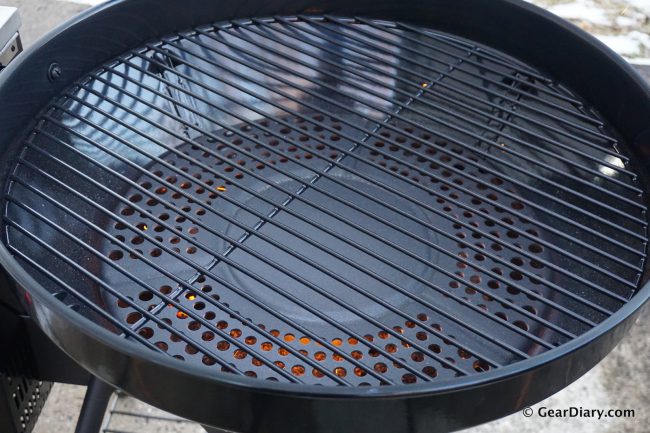 A look at the grate, with deflector plate beneath, while the fire pot is roaring. 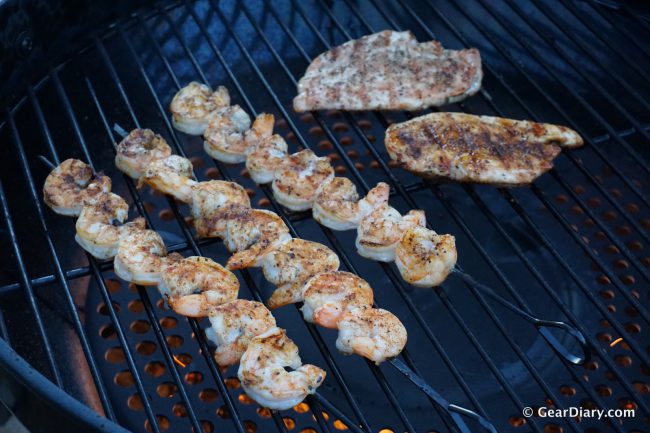 Chicken and shrimp on the Bullseye

Honestly, I didn’t think I’d use the Bullseye as much as I did during testing. On weeknights, I found myself firing up the Bullseye because it was perfect for quick cooks like grilled chicken breast, grilled shrimp, burgers, etc. I was really impressed with the sear marks I got on my chicken and shrimp, something that pellet grills are not necessarily known for. The Bullseye is great for families who want wood-fired flavor but want the versatility to cook either low and slow or just fire it up real hot to cook burgers and hot dogs. Plus, it’s pretty affordable for a wood pellet grill, at $399. I think the Bullseye also pairs well with the Stampede or any other smoker since you can smoke your meat low and slow on the Stampede and then jack up your Bullseye at the end of the cook to sear at really high heat without having to wait for your Stampede to reach its top temp. 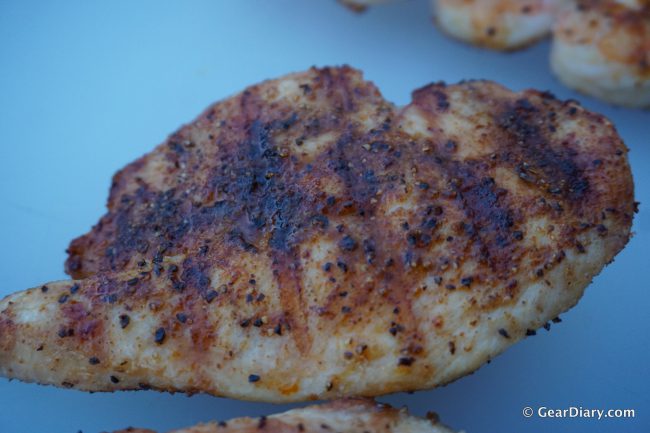 Grilled chicken from the Bullseye 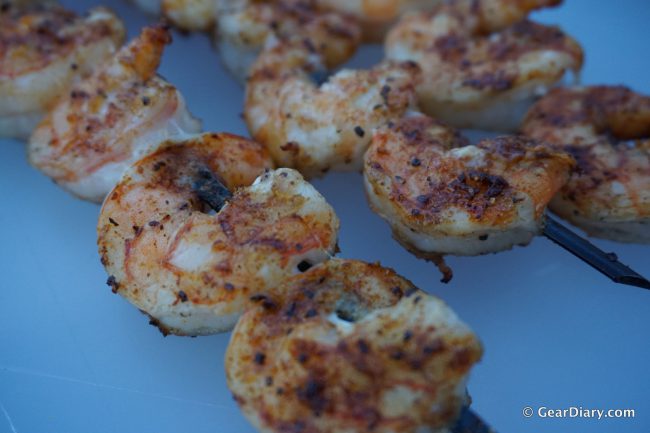 Shrimp from the Bullseye

While the technology baked into each of REC TEC’s standard pellet grills, not including the Bullseye, is impressive, where I’m left slightly disappointed is the mobile app experience. With REC TEC’s mobile app, you can start your grill, set or change grill temperature, monitor your grill temperature and both probe temperatures, and turn the grill off. What’s disappointing is the fact that while you can set an alarm when the internal temperature of your meat hits a certain number, it only alerts you when you’re using the app, it does not utilize push notifications. My recommendation would be for REC TEC to update their app so that it can send push notifications to your phone. This would allow the grill to send an alert when you’re meat is ready whether or not you’re using the app.

Control screen on the mobile app

A temperature chart over a long cook, showing the amazing accuracy of the PID controller

REC TEC also sells its own line of rubs and BBQ sauces.  They were kind enough to send me their Rub & Sauce Bundle so I could try them all out.  They’ve got all sorts of flavors, like Asian, Greek, an espresso rub, a honey rib rub, a spicy bloody mary rub, and much more.  Plus, their BBQ sauce is delicious!  The rubs pair perfectly with any meat or vegetable, just be careful with how much you use as they can be a little salty if you over season.  If you’re buying a REC TEC Grill, you owe it to yourself to check out their rubs and sauces as well.

Minor disappointments notwithstanding, I’m left absolutely impressed with REC TEC Grills. Their grills are built like a tank, use high-tech controllers with Wi-Fi connectivity, yet are simple as dirt to use, and their customer service is some of the best in the business. Assembly was very easy, using the included hardware and tools.  If you have 30 minutes to an hour and are handy enough to put together Ikea furniture, you’ll be just fine. I would highly recommend REC TEC Grills to anyone looking for a pellet grill; you cannot beat the value proposition that REC TEC offers.

You can purchase your REC TEC Grill directly from the source at RECTECGrills.com.

What I Like: Sturdy materials and construction; Great technology features including Wi-Fi connectivity and mobile app control; Very easy to use; Makes delicious food

What Needs Improvement: The mobile app needs an upgrade to provide push notifications; Vent covers on Stampede model should be included or built-in