If I had to choose a list of ‘desert island games’, in my top five you would find Star Wars Jedi Knight II: Jedi Outcast. As I said in my ‘Netbook Gamer’ retro review, “Jedi Knight II is my favorite of the entire Kyle Katarn saga, my favorite Star Wars game, and my favorite first-person shooter.” 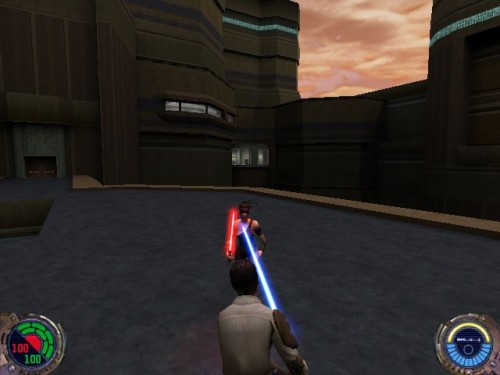 Back in 2002 when the original game was released, it was only available for the PC – and was received as one of the best shooters ever made and an instant classic in terms of Star Wars games.

Several months later it saw an excellent Mac OS X port, a fairly solid XBOX port, and a choppy, wonky and lower-resolution GameCube port. Guess which one the Switch port most closely resembles?

I am not going to dig too far into the specifics of the game, as I did an in-depth retro-review for the Netbook Gamer series nearly a decade ago!. I continue to play Jedi Knight II on the Mac or PC at least once per year, and played my PC copy over the summer and had an absolute blast. Yes, there are ways it is showing its 17+ years since release, but there is so much to it that holds up incredibly well – certainly better than a prettier but much dumber new game like Wolfenstein Youngblood!

I have two major issues with the Nintendo Switch port of Jedi Knight II: graphics and controls. The original game wasn’t made for widescreen monitors, but simple settings tweaks enable it for anyone playing now – but the Switch version doesn’t allow that mode. Nor does it feature the crispest and highest resolution visuals based on comparing the game between the Switch and my Mac.

The visuals wouldn’t bug me too much – I am constantly playing old games so am very forgiving – but the controls are pretty terrible. I have never been a huge fan of FPS games on a console controller, but the Switch has numerous games (such as Youngblood, Red Faction Guerilla, Wolfenstein II, Doom, etc.) that show it is possible to make it more than just workable.

After a while, I ended up enabling cheats to play through the game and just enjoy the story in the handheld format. Even without fear of dying the controls made many levels feel more like a slog than a challenging adventure. And as noted, I had picked up the game again on my Mac to compare – and now since completing the Switch version I have been playing through it on the Mac and it is every bit as glorious as ever. The problem is the poor quality of the Switch port. 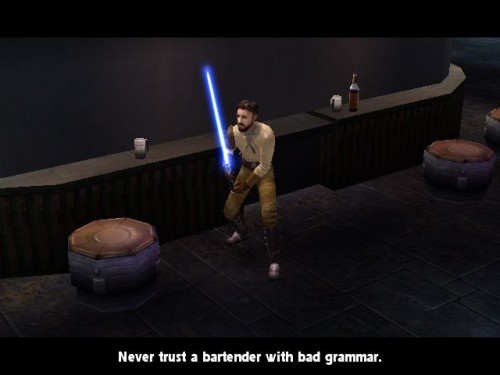 What I Like: Still a great game; inexpensive; playable if you can get a handle on the controls; cheats are available to help get past the bad controls.

What Needs Improvement: Controls are difficult to master; graphics are not optimized; widescreen not implemented.

Obviously I do not recommend buying this game – the lower quality visuals and poor controls combine to undermine one of the best shooters of all time. This does not bode well for the 2020 release of Jedi Academy.

If you are still interested, head to the Nintendo eShop and grab Star Wars Jedi Knight II: Jedi Outcast for $9.99!