Raina finally updated to an iPhone 8. She wasn’t initially interested in its wireless charging, but after I put a wireless charging pad in her home office she changed her mind. Now she’s a fan, so I got her a myCharge 10K. We looked at this affordable wireless battery pack some time ago; it’s worth a second look. 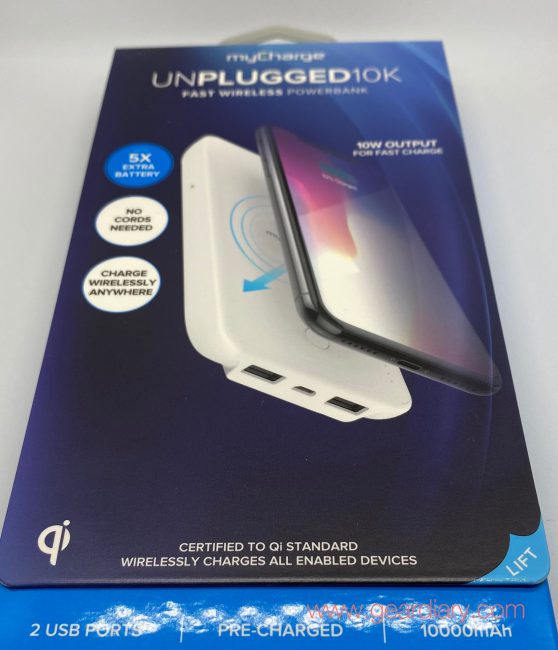 The $69.99 UnPlugged 10k delivers up to five additional charges when you are on the go and using a cable. The battery is also equipped with Qi-wireless charging so you don’t need a cable so long as your phone is similarly equipped. You won’t get the same five charges when using the wireless capabilities, but the convenience is worth the trade-off. 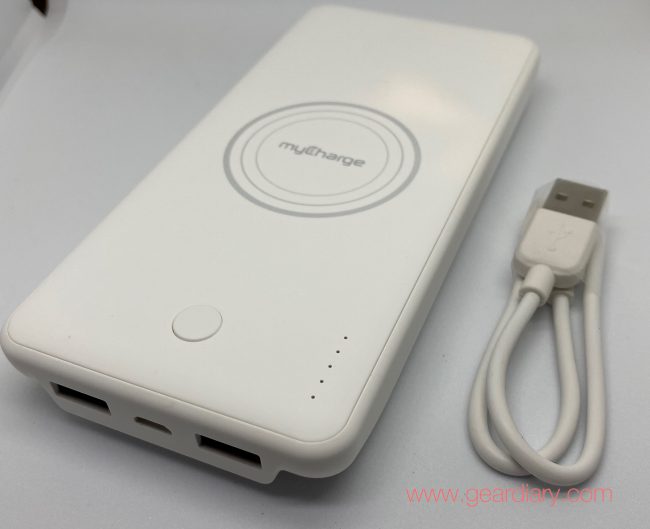 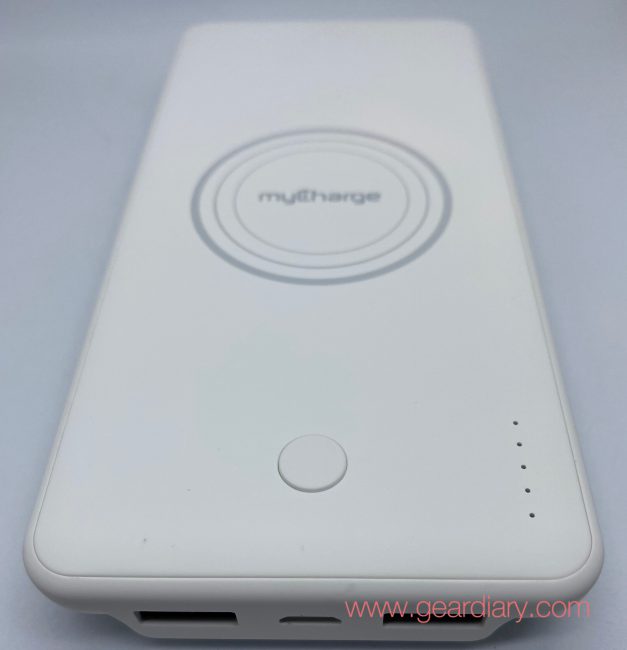 The battery measures 2.8” by .8’” by 5.8” and weighs just .4 pounds. That’s impressive considering it packs a 10,000mAh lithium-ion battery. The wireless charger has an output of 10 watts but it also has two 2.4A ports for wired charging. (The battery is also available in 3000mAh and 5000mAh capacities.)

The battery has a simple, unassuming rectangular shape and is covered in a white, soft-touch material that feels great in the hand. 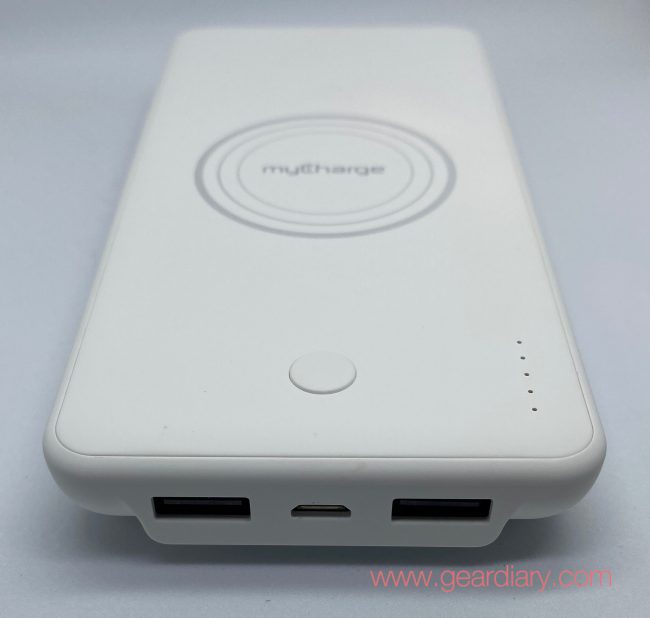 At one end the UnPlugged 10K has two USB-A ports for standard wired charging. The out[ur of 2.4A means you’ll top off your device quickly but keep in mind the fact that the battery doesn’t come with charging cables. You’ll have to provide those yourself. Raina’s current external battery has a US 110 plug and both micro-USB and Lightning cables built into it. She’s bummed the UnPlugged 10K doesn’t have either of those. Were the MyCharge battery only able to charge via wires, there’s no way she would be interested. Fortunately, the UnPlugged 10K has a trick her current battery doesn’t offer… wireless charging. That trick alone makes it worth consideration.

A small button on the top activates the battery with a long press while a short press lets you see how much charge remains. There are five LEDs. The understated nature of the button and LEDs fits in well with the simple design of the battery itself. 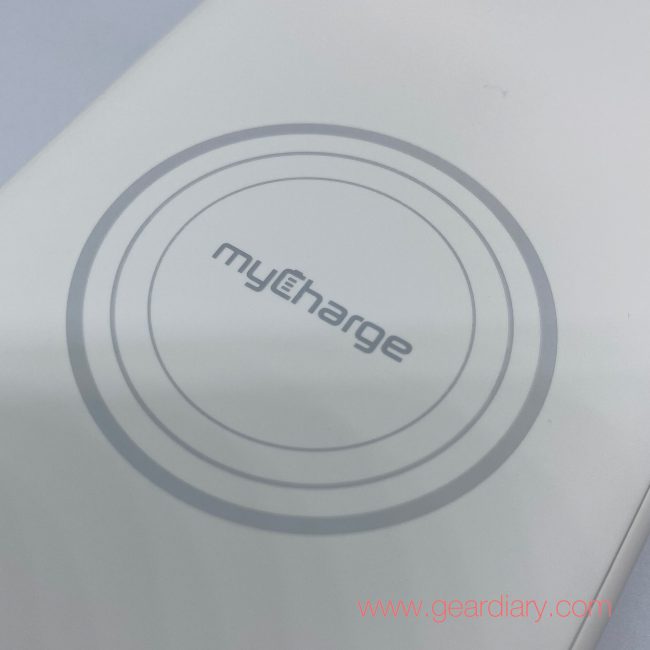 As myCharge describes it this way:

Extend the battery of your Qi-enabled phone with the Unplugged10K wireless charging portable battery. This 10,000mAh wireless portable charger is not only certified to Qi standard but also meets the Apple and Samsung Fast Charge standard; delivering up to 10 Watts of power. The 10 Watts of powers ensures the absolute quickest wireless charge on the market. Ditch your cables and simply drop your smartphone on the powerbank and charging will start upon contact. Additionally, two USB-A ports allow you to charge up to three devices at a time. 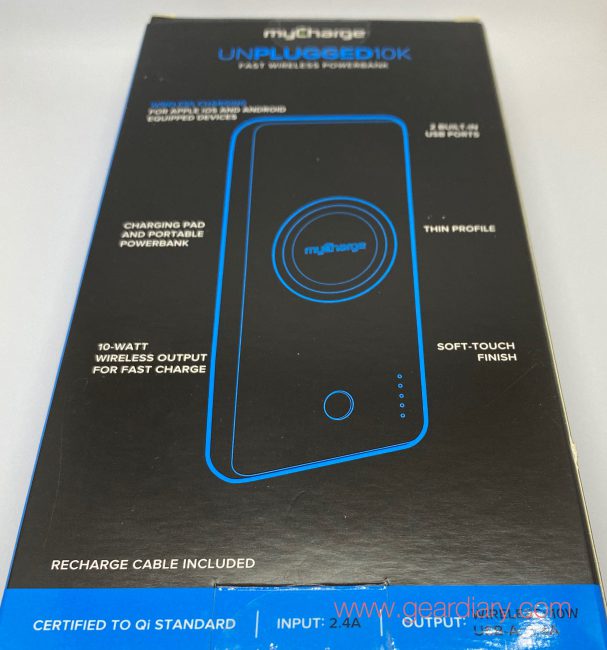 The myCharge 10K is a simple battery. The soft-touch material looks and feels great. The wireless charging is a fantastic feature. Sadly, the use of a micro-USB for charging belongs to the ancient past of 2017; the lack of USC-C ports does as well. Redemption comes in the form of the Qi charging abilities. That, and the massive 10,000mAh battery for under $70, makes it a worthy contender if you are in need of a new external battery. I know Raina is happy to have it now that she’s using an iPhone 8. Check it out here.

What I Like: Large capacity in a battery that is surprisingly small and light; No bells and whistles; Quick wireless charging AND two USB-A ports for wires charging; Lots of tech built-in for safe, rapid charging of all your devices

What Needs Improvement: No USB-C ports; Uses microUSB for charging. How 2017 is that!?