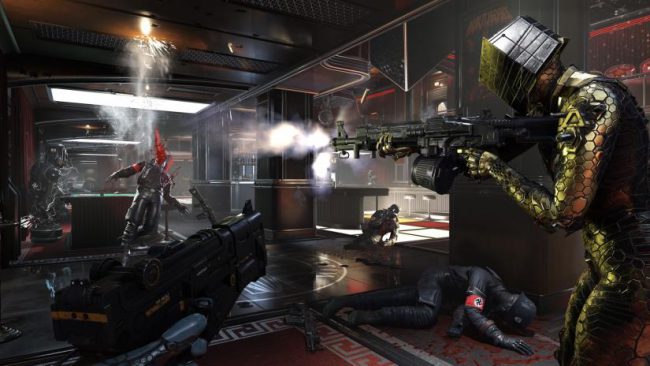 Are you considering buying the newly released multiplatform game Wolfenstein Youngblood? Please stop! Don’t do it! Let my purchase and playthrough serve as the warning beacon that saves you from unnecessarily wasting time and money on one of the worst shooters I have ever played, one that highlights some of the core issues with formerly great Bethesda Software and with current shooters in general.

Here is the basic description of the game:

Wolfenstein®: Youngblood is a brand-new co-op experience from MachineGames, the award-winning studio that developed the critically acclaimed Wolfenstein® II: The New Colossus.

Set in 1980, 19 years after BJ Blazkowicz ignited the second American Revolution, Wolfenstein®: Youngblood introduces the next Blazkowicz generation to the fight against the Nazis. Play as one of BJ’s twin daughters, Jess and Soph, as you search for your missing father in Nazi-occupied Paris.

Before getting to my review, a bit of history about Wolfenstein. Way back in 1981 Muse software released Castle Wolfenstein for the Apple ][, as a sort of stealth-action top-down shooter. It was awesome and I loved it and my friends and I played it again and again in college. The next major entry came from id Software in 1992 as a retelling of the 1981 classic and was the first major First Person Shooter (FPS) game more than a year before id released DOOM. In 2001 the sequel Return to Castle Wolfenstein was released to solid reviews, one of the first games making use of the id Tech 3 (aka Quake III) engine that powered the majority of early 2000s shooters (Jedi Knight II, Star Trek Elite Force, Call of Duty, Medal of Honor, Soldier of Fortune, etc.) – and remains a fun game to play today.

2009 saw an attempt to reboot the series as Wolfenstein, and to quote a review I wrote for a long defunct site “Wolfenstein is a fun romp with some interesting sci-fi / occult overtones and elements, but ultimately a throwaway in every respect.” The plot is a rehash, the gameplay is mediocre … and as a result the franchise was shelved again for five years. Suddenly in 2014 MachineGames was brought in to reboot the franchise again along an alternate timeline where the Nazis won World War II and took over the world – and this time it worked pretty well! The New Order was solid, The Old Blood was a smaller game but still pretty good, and The New Colossus was the best of all the new games. The new series has been praised for gameplay, but also for the narrative style and characters. The main character for nearly forty years has been BJ Blazkowicz, so when a new entry was teased involving his children as the main protagonists, it made sense and was an intriguing new direction that could sustain a new generation of games.

In terms of basic plot setup, the game happens in a world where America and much of the world is now free from Nazi occupation, and Blazkowicz and his wife Anya are raising twin daughters Jessica and Sophia and teaching them survival and fighting skills. Suddenly Blazkowicz goes missing, and the twins believe they know where he is and that they alone can locate him, so off we go on a grand adventure to Paris!

Since nobody is interested in reading a 10,000 word detailed screed about the specifics of everything this game does poorly, here are five key reasons that Wolfenstein Youngblood is a milestone in everything you can do wrong with a game while still releasing it in a finished and relatively bug-free state.

OK, so while I said I would try to avoid an extended rant on this game – I failed. As you might be able to tell, even writing about the significant issues with this game got me irritated all over again! Some of it is expectations – after a few solid entries my assumption was that this would be a derivative offshoot that didn’t mess with what worked. Also, for a game that gave me no technical issues in a genre that has historically been fraught with day-of-release issues, that means the many problems are ones of fundamental design.

There are no patches to fix the weak character design and poor writing. No hot-fix is going to help the tiny world and repetitive quests. Sure, they could put some work into improving your AI partner, fixing the armor-ammo system and rebalancing the spawning system … but if you look at what has been talked about, you see that the priority is getting more people to play (or at least TRY to play) co-op mode together, getting people to buy stuff to improve their level-ups, health and armor – and eventually just to buy your way to an easier win.

And I left out the smaller annoyances I have with the game – I mentioned the lack of checkpoints, but also the fact that you can’t quit a mission even if you discover you’re too low-level to accomplish it, and the inability to actually pause the game (even in single-player mode!) are mind-bogglingly stupid yet pale compared to the others. Things that would ruin most games are an afterthought here.

I am intentionally skipping the typical ‘what works / what needs improvement’ section of the review, because instead I am going to flatly say: do not buy this game. If you haven’t played Wolfenstein II: The New Colossus (or Wolfenstein: The New Order, or The Old Blood) grab those as they are frequently on sale on the various platforms. Even on the Nintendo Switch you can grab several shooters that are much better – The New Colossus, DOOM (2016), and the newly release original DOOM Trilogy. On twitter I noted that I’d replayed DOOM 3 BFG immediately after Youngblood, which threw all of the poor design, gameplay and writing choices into very stark relief.

So please – go home, hug your PC or console, and play a decent game.