Perhaps you have heard about this – the new Google Pixel 4 bends and breaks unlike any midrange or flagship phone since the 2014 iPhone 6 … which aside from causing embarrassment for Apple, also caused a shift in testing, design, and materials of construction across the industry.

Perhaps Google didn’t get the memo – or maybe they did polling and found that a significant amount of people didn’t care if their phone was easily broken. Either way, this is just the latest in a series of failures of Google’s own doing that has occurred over the last several weeks. I wanted to round some of them up because I feel they have been either overlooked or downplayed in much of the tech media. 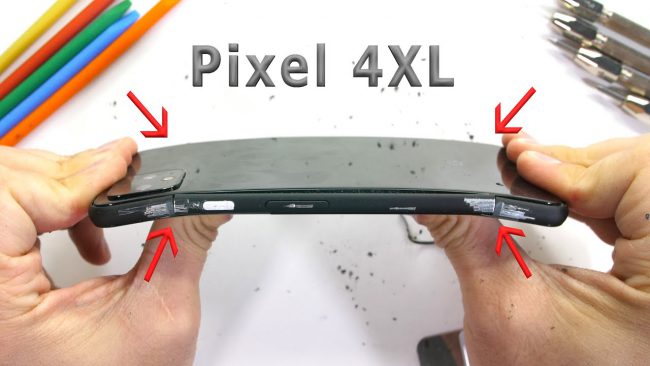 Pixel 4 Atrocious Battery Life: This is the #1 complaint about the new line. Bottom line is that the Pixel 4XL has about 50% worse battery life compared to other flagships … and the Pixel 4 has ~20% shorter battery life than the previous generation – which itself was criticized for poor battery life. We will dig into this more in our upcoming review of the Pixel 4 series, but suffice to say that it has already become a punchline – and deservedly so.

Pixel 4 Inexplicably Poor Performance: Another area the Pixel 4/XL lags is performance. Apple’s $100 cheaper iPhone 11 is TWICE as fast across a half dozen real and synthetic benchmarks. But what is worse for me is how it compares to other phones using the same SnapDragon 855 chipset – the Pixel 4 ends up ~15 – 25% below other phones such as the Galaxy Note 10+ using the same processor SoC. That performance lag is not explained by the RAM difference, so it points to poorly optimized OS software or fundamental design problems. Or – slowing the processor to save battery life.

Dim Screen Capped for Battery Life: After learning that the 90Hz display needs to come with a big asterisk due to the conditions that must all be in play to enable it, yet another thing we learned this week was that the gorgeous OLED panel is intentionally dimmed to ~450nits compared to the >900 on the iPhone 11 and Galaxy Note 10+. Again – it is obvious, and also appears to be something done to play for more battery life.

Other Outcomes of ‘Design By Survey’: There is a famous Steve Jobs reworking of a Henry Ford quote “It’s really hard to design products by focus groups. A lot of times, people don’t know what they want until you show it to them.” And yet companies do it all the time – and it shows. It certainly shows on the Pixel 4/XL in more than a few ways:
– Adding a telephoto lens but not a wide-angle lens. Look for a wide-angle lens in the Pixel 5.
– Missing several popular video modes (literally a “surveys said” decision)
– Unfinished FaceID clone with security holes which is lacking buy-in from banks and others

Tech Looking for a Home: People have criticized the large ‘forehead’ on the Pixel 4 correctly, which brings me to another Steve Jobs quote “You can’t start with the technology and try to figure out where can I sell it.” The forehead on the Pixel 4/XL is large despite losing a camera this year because it picked up FaceID – and also the Motion Sense radar sensor that … um, lets you wave your hand to change songs like something that would have seemed cool in the late 90s. Maybe ‘Project Soli’ will be useful someday for something. But right now all it does is decrease the screen to phone ratio for no apparent reason.

Google Stadia ‘Negative Latency’ Kerfuffle: One of my core arguments about Stadia has been that the math between normal latency and promised frame rates don’t converge. Last week we finally got some insight from Google that they plan to limit the devices and control schemes to minimize issues, but also that they are implementing predictive analytics to smooth over intermittent lag. While it won’t help with persistent bad connections, it could be what is needed to make server-based solutions actually sustainable. But for many, it is an admission that they can’t eliminate latency so will simulate gameplay and ‘push the button for you’ instead. Reality? Too early to tell.

Late to Your Own Party: One of the key selling points for the Pixel (and Nexus before that) is that it offers a ‘pure Android experience’ similar to the control Apple has with the iPhone. We have already seen that despite this, the Android implementation on every Pixel phone has been quite buggy on release and taken a while to stabilize while performing better on existing phones. Now Google has slipped even further, most Pixel 4/XL phones have not seen the November 1st update that has been delivered to phones from pretty much every other vendor including Samsung – heck, even my Galaxy Tab S6 has gotten the update! So much for that selling point!

Holiday Coal for Pixel 4/XL Early Adopters: Stop me if you have heard this one before — a company introduces a new product and people rush out to buy it, only to see it on sale a few weeks later for a significant discount, and then they get upset that someone else got a better deal. Google’s Pixel 4/XL Black Friday deals have been revealed – and many people aren’t happy. Honestly, early adopters should know better by now!

Pixel 3 Joins the “Yes, in Fact, Your Battery IS Dead” Crowd: Joining yet another inauspicious iPhone 6 club, Since getting Android 10 Pixel 3 users have been reporting that the already short Pixel 3 battery life has been made worse as the phone has started shutting down without warning with the 30-40% battery remaining. Again, this is very likely the result of over-aggressive battery life management as it was with the iPhone 6 years ago, but given how poor the battery life already is on the Pixel 3, this is really adding insult to injury! The only upside is it isn’t happening to Pixel 4 users!

All Your Health Data Are Belong to US! This one emerged even as I was compiling this list – Google has been working with health care provider Ascension, the second-largest provider in the US. In the deal, Google has had access to the health records of millions of patients across 21 states … without their knowledge. While this is all *legal*, having someone who makes their money turning personal internet data into targeted advertising suddenly having access to health records for those same ‘advertising targets’ is at least somewhat disconcerting.

All 50 State Attorney’s General Expanding Anti-Trust Investigations to Include Android and Search Google is somewhat of an over-achiever here, having received the largest fines and punishments in history based on privacy violations and anti-competitive behavior amongst other things. Their advertising business has attracted extensive global scrutiny due to concerns of anti-competitive practices, and now based on those investigations, it appears that Google has been leveraging their monopolies in anti-competitive ways that include Android and Search.

Bottom Line: How do you feel about these? Do they mostly feel pretty small to you? I mean, sure – we are getting a pretty clear picture that the Pixel 4/XL is a disappointment that suffers from some of the most common failure modes that have occurred across pretty much every major company ever.

Google is a company that has tremendous goodwill even among cynics and skeptics such as myself – if for no other reason than I know that they are better than anyone at keeping that massive trove of data they collect about all of us secure. However, Google has also paid more fines than any tech company in history — due to invading user privacy and using data without permission repeatedly. At a time when governments are becoming increasingly wary of the power held by tech giants, these sorts of self-induced issues can leave a lasting impact.

What do you think? Any other things I might have missed?