First, there was glamping — all the fun of sleeping outdoors, but with no dirt, less likelihood of sharing a tent with a bear, and sometimes even electricity and running water. The new Ford Expedition Limited FX4 is the glamping equivalent of SUVs; all the off-roading rugged goodness, but with leather seats and a camera so you can see the outside without going outside. 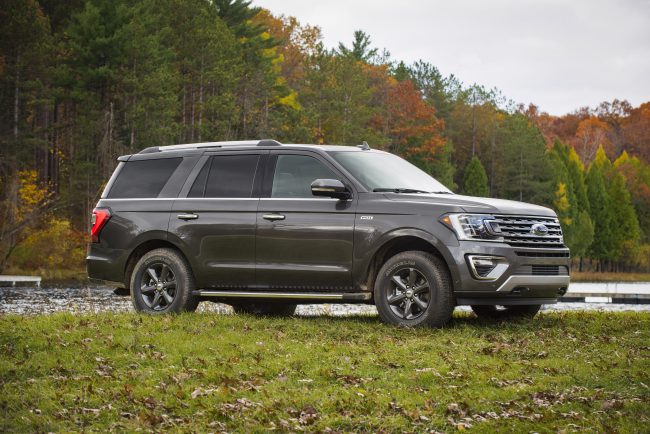 There are a lot of legitimate off-roading capabilities in the new Expedition. Ford has “athletic” 32″ tires on it, off-roading shocks, steel plates to protect the undercarriage, plus a chin spoiler and step bars. There’s no explanation for what makes the tires athletic, but one would assume they’re planning to appear on the next season of American Ninja Warrior or something. Also, you can tow up to 9,200 pounds, or the equivalent of 2-3 Great White Sharks. All points for the “this is a super tough vehicle for off-roading adventures.”

On the other hand, the interior is so nice you’re not going to want to let that dirt inside. There are leather seats, seating for 7, and an automatic transmission. Plus the 360-degree camera is handy if you want to see what’s going on but not risk the shark you’re towing breaking in. There’s also adaptive cruise control and parking assistance, so you won’t have to parallel park between two evergreen trees without help. So…points for “this a luxury vehicle.”

Unfortunately, there are no good portmanteaus for luxury off-roading SUV that sounds as good as “glamping”, but if you’re interested in being outside but with more amenities than the moon landing shuttle, the Ford Expedition FX4 is worth a look! You can learn more about it here.