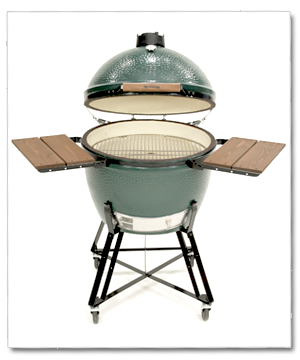 The round shape of the Big Green Egg maximizes the surface area on the grill vs. the footprint of the entire cooker. This has pros and cons. Actually, I purchased the smaller Medium Green Egg, but there are sizes from a tabletop version for a small urban patio up to an XL Green Egg that can cook two 20-pound turkeys or twelve steaks at one time. The guy that sold me his Egg told me that he’d been warned that everyone who buys a Medium eventually wants to upgrade to a larger size, and that’s how I got such a good deal from him. For my family of two, the Medium Egg seems perfect and is easy to drag around the deck out the way when not in use, thanks to the wheeled “nest” that is available as an option.

The Medium Green Egg heats up quickly and evenly. It’s the perfect size for making personal wood-fired pizzas on the grill, and we’ve gotten pretty proficient at this fun process in my house. It’s great for firing up to smoke a couple of chickens that we use to make chicken salad or breast meat for sandwiches for a week’s worth of lunches. With the addition of a ceramic plate setter, you can block the direct flame and use indirect cooking methods to smoke meats instead of putting them directly over a fire. More on that later.

Temperature adjustment comes from sliding open an inlet on the bottom of the Egg and by adjusting the louvered top that sits on top of the dome. This cap is removable for cleaning, which is an advantage since it tends to get gunked up from soot and grease after a long smoking session. Unfortunately, this also means that it can fall off when you open the lid, and when you’re talking about expensive ceramic, you’d hate to have a heavy piece of cast iron crack your lid. Another reason to be careful when opening the Egg is that the rapid influx of air into the controlled environment can cause instant flame ups that could ruin your meat or more perilously, set your face on fire. YouTube is full of cautionary videos showing these infernos, so they recommend that you “burp” your grill by opening the lid just a little bit at first to avoid a rush of oxygen into the hot environment.

On the whole, I’ve been very satisfied with my Medium Green Egg for its intended use, but I do prefer my Primo XL. Here’s why: 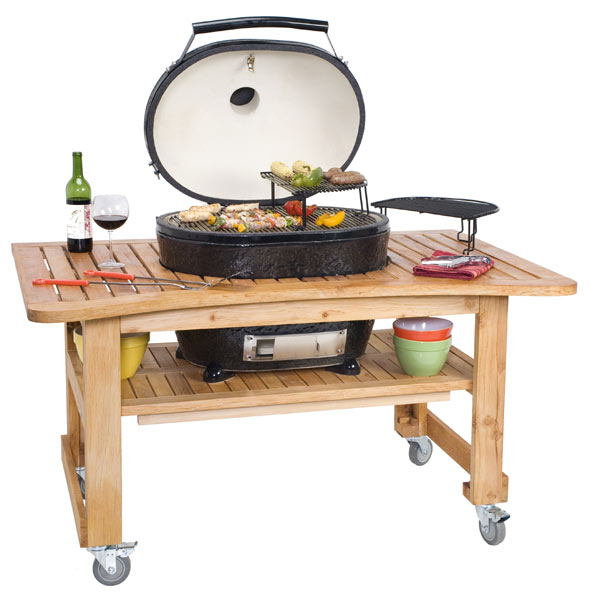 As much as a circle is the perfect geometrical object for maximizing surface area, ribs aren’t circular. Unless you’re cooking a pizza or the world’s biggest burger, most food just lays out better on the oval grate configuration of the Primo XL. The oval fire box is also easy to divide with an optional ceramic wall that allows you to build your fire on one side and smoke your meat indirectly over the other side of the grill. (An aside, both these grills have a whole lot of expensive accessories available, and you WILL buy some of them. Factor that into the final cost of your investment. I mean, you gotta get a pizza stone, right?) 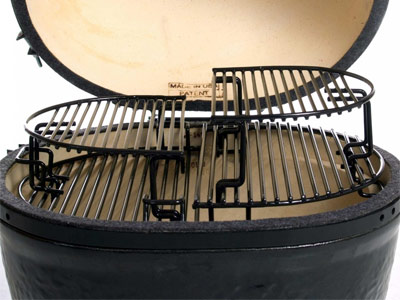 The Primo also allows you to use extended grill racks to cook meats at different levels, and therefore variable temperatures, within the cooking area. This is great for cooking ribs or a chicken directly on the grate while smoking a brisket or pork butt slower and at a lower temperature at the same time.

The configuration of the heat adjustments for the Primo XL are very similar to the Big Green Egg, with the main difference being that the cap is not removable. That’s good for safety, but does necessitate that you clean it often lest it freeze up on you. When you’re done cooking on either of these grills, you can put out the fire quickly and safely simply by closing the upper and lower vents. Unlike your Weber kettle that you have to let burn out, the coals on a ceramic grill can still be reused for your next cookout.

Previous Page2 of 3Next Page
Want More? Follow Us Here!