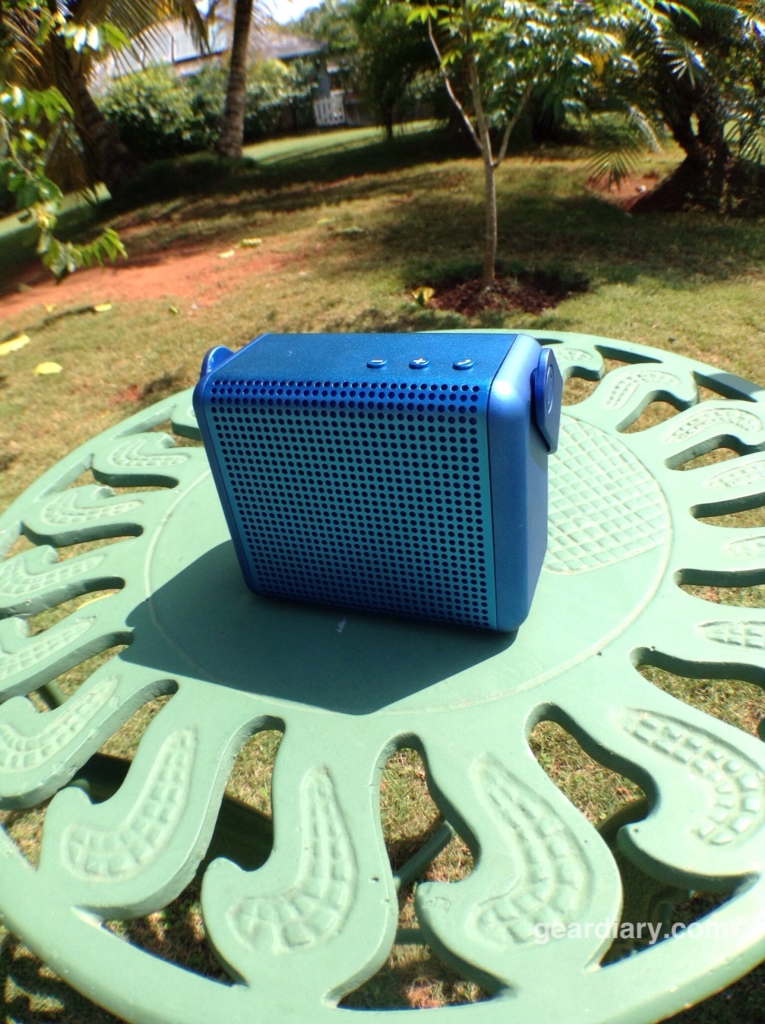 We posted our review of the MiPow Boom mini the other day. (Read it.) The speaker is tiny but the sound is anything but tinny. I’m impressed by the sound such a small speaker is able to pump out and I still can’t believe that, after using the speaker pretty continually since we got here to Jamaica, I still have not had to charge it. There is no question in my mind that MiPow’s battery rating is more than a bit conservative. The company also sent me the first ever review sample of the MiPow Boom. This speaker, the larger sibling of the MiPow Boom mini, is even more impressive. Let’s take a look. 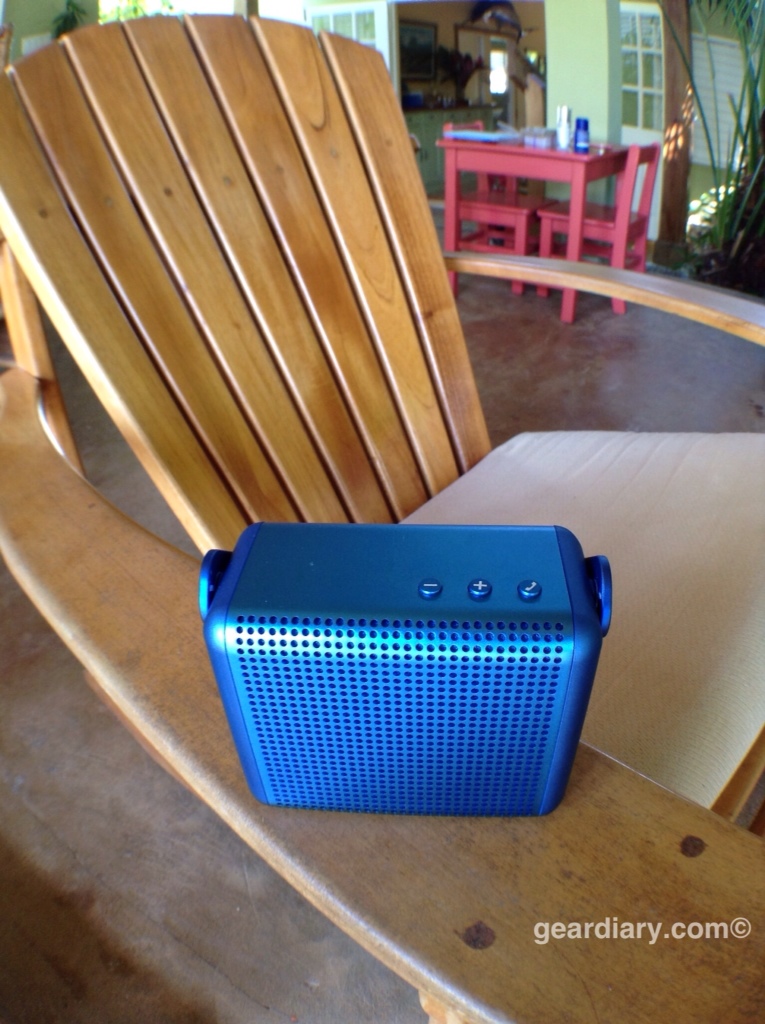 The MiPow Boom may be larger than the MiPow Boom mini but that doesn’t mean it is large. Coming in at just 106(L)×50(W)×92(H)mm or 4 11/64″ x 1 1/32″ x 3 5/8″, tt is small and light enough to go wherever you go. And thanks to the Anodized aluminum-alloy body the MiPow Boom is surprisingly tough. No, this speaker isn’t ruggedized (I really hope they will release a rugged version in the near future!) it still feels solid with no give when pressing on it. 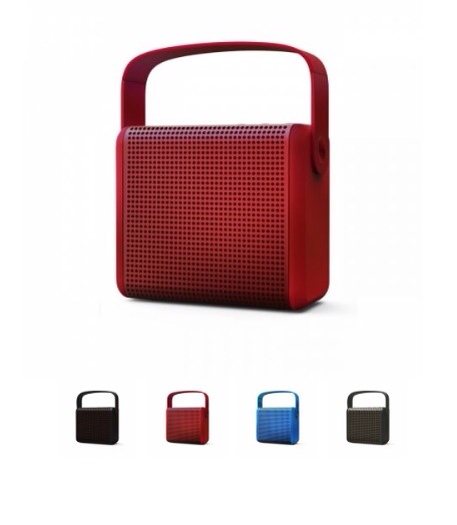 Many colors from which to choose

The MiPow Boom comes in a variety of different colors and has a detachable handle so you can grab it and carry the speaker with you on the go. If, however, you don’t need the handle or think it makes the speaker look like a kids toy you can simple pull it off and put it in a shelf. (Our friends at Technabob posted our unboxing videos and one of their commenters said this looked like teenage girls were the target market. I don’t agree but if teenage girls WERE the target market it would only be because they like well-built, great sounding speakers.) 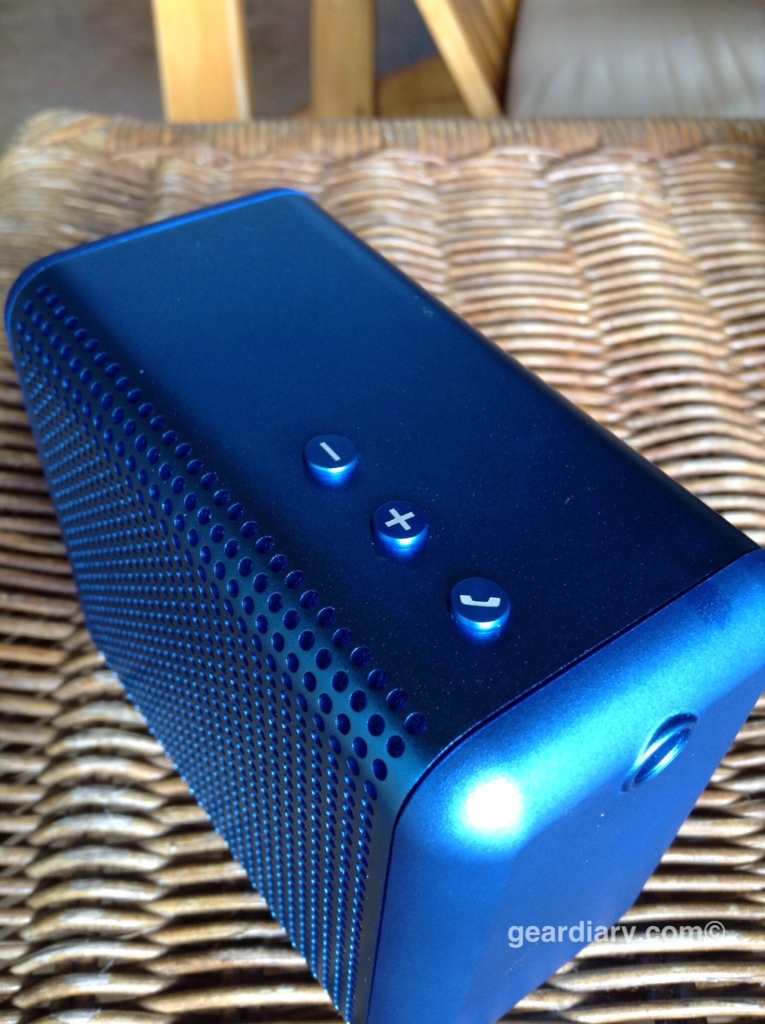 The MiPow Boom has a simple design. That is… by design. 🙂 On the top there is a button with a phone icon that turns the speaker on and off and allows you to pause or play music. It also allows you to answer calls when they come in since the MiPow Boom, like the MiPow Boom mini, is also a speakerphone. Next to the phone icon button are two more buttons. They increase or decrease the volume. 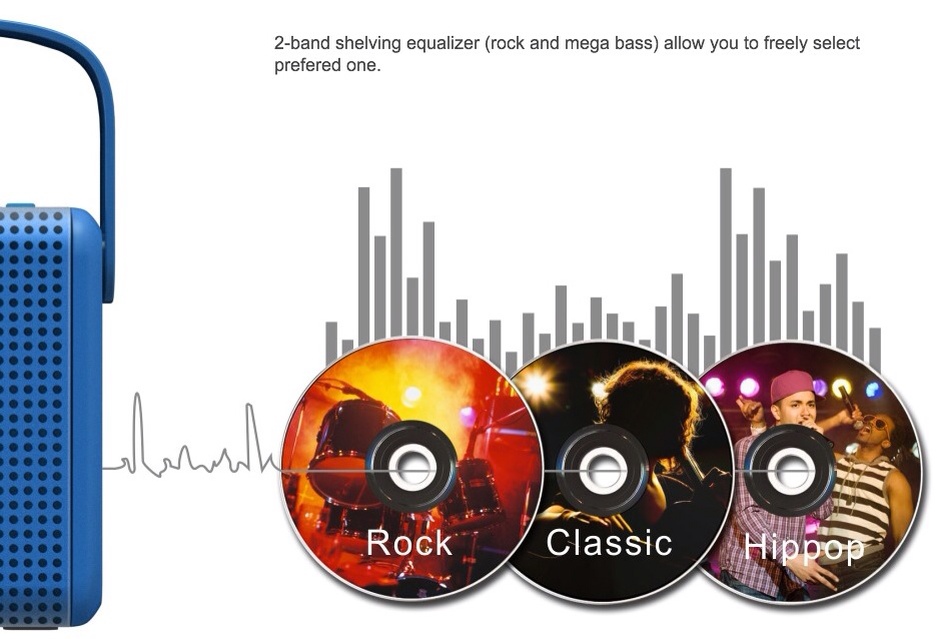 Pressing the buttons at the same time changes the equalization settings. The various settings are more than a bit limited but it is nice to have some way to tweak the music without having to go into your audio device’s settings. 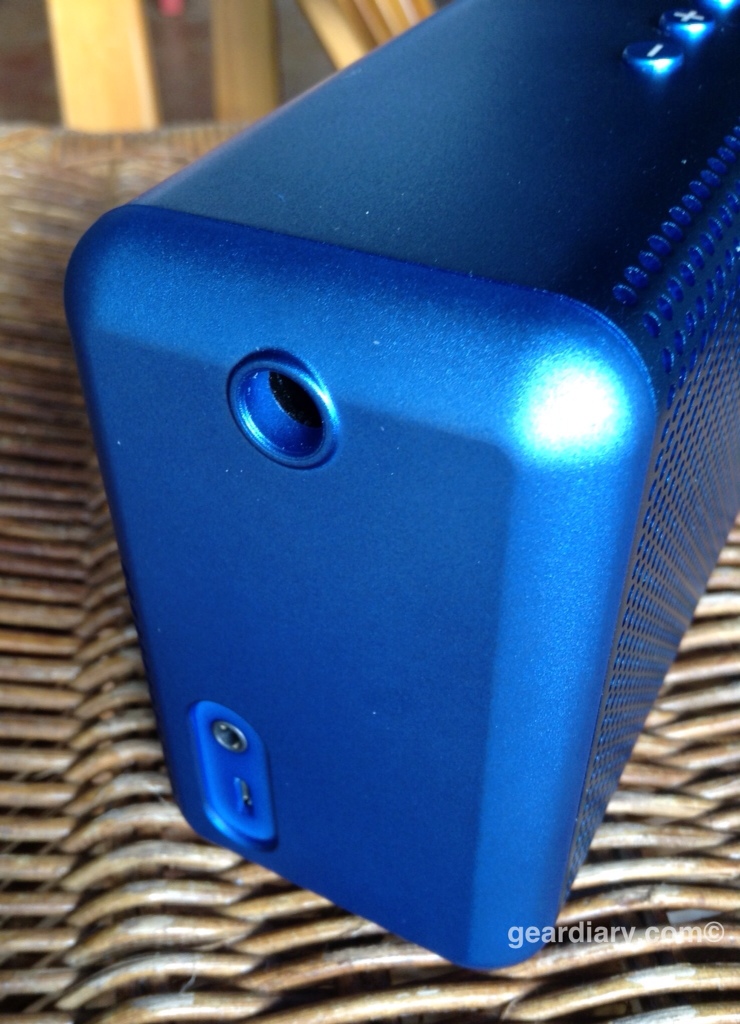 The left side of the speaker has a 3.5mm port so you can physically connect your audio source to the speaker. That includes the ability to plug the included USB to 3.5mm cable into your computer and the MiPow Boom and use the speaker as a much-improved audio source for your laptop. 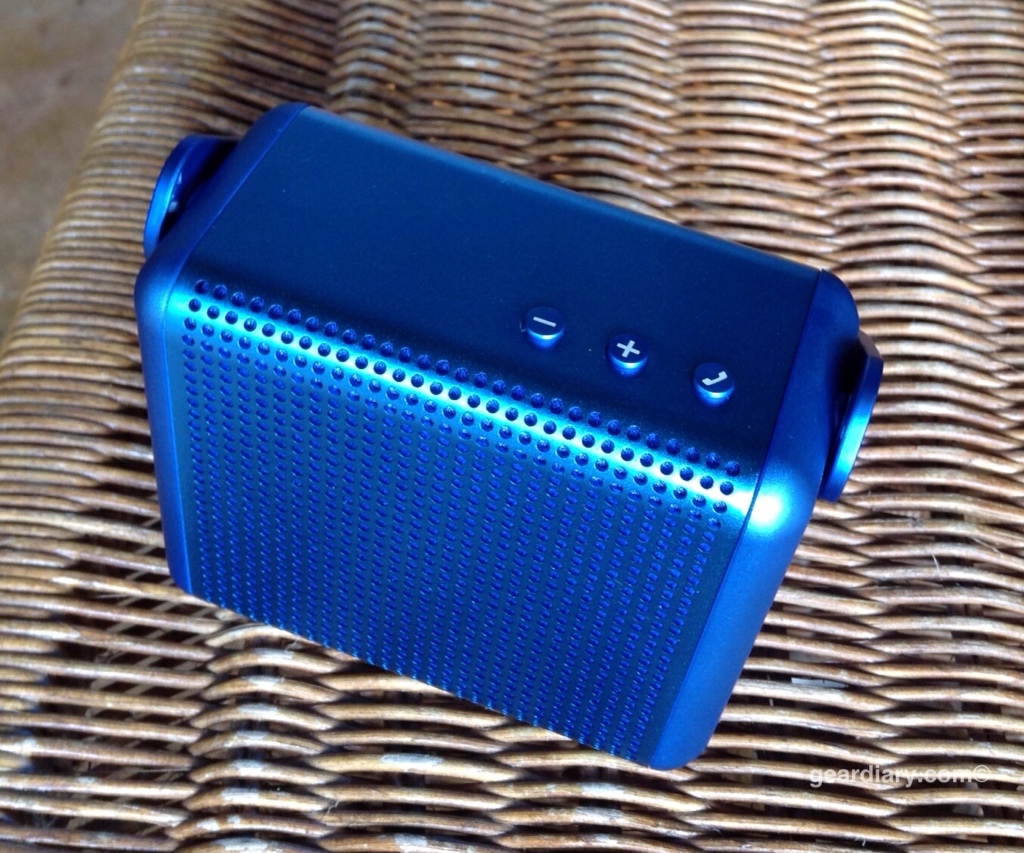 The only other design feature of note is the pulsing blue light in the upper right corner of the speaker when it is on. This is simply the “I’m on” indicator. If you want to know how much charge is slept in the speaker you’ll want to look at your iOS device- assuming you are using one. The icon on the iPhone, iPad or iPod touch will let you know how much battery life remains. The company claims you will get 22 hours of talk time and 10-12 hours of continuous music play. Personally I think this is nonsense… In a good way. Like the MiPow Boom mini I’m seeing amazingly impressive battery life. I’m not sure HOW much better the actual runtime is but you can be sure I’ll be doing some testing when I get home. My best guess is that the runtime will be 50-100% better than what they claim. Now tell me, when was the last time a company listed battery time that was actually LESS than actual?

The Boom is a bluetooth V4.0 compliant and gets up to 33′ effective range. I have been seeing about half that when using the iPod nano but I suspect that is the result of the Bluetooth chip in the nano rather than the MiPow Boom. 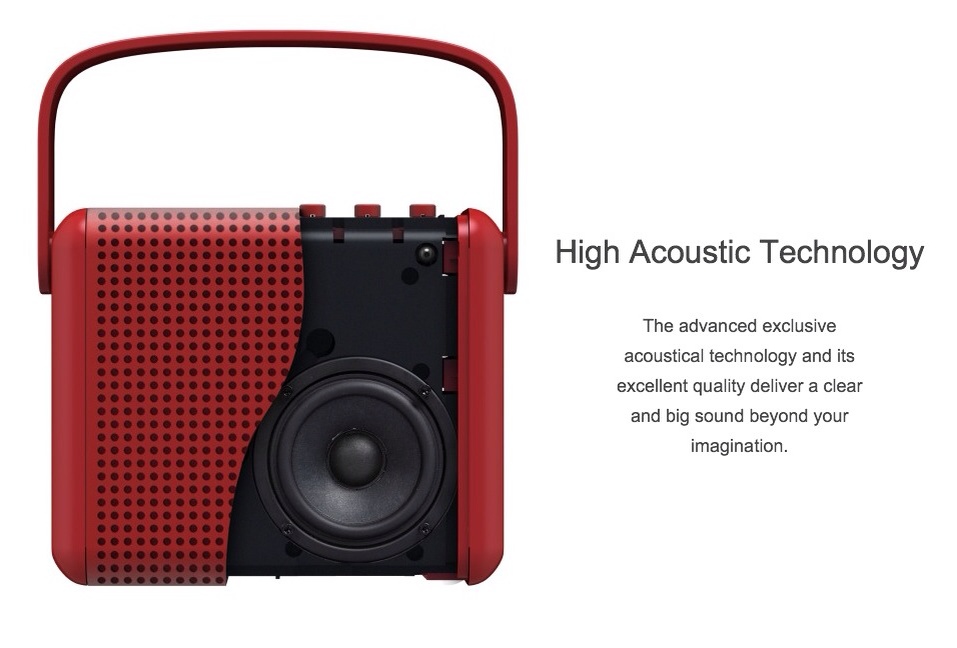 THE BOOM has two 3W speakers. That doesn’t sound like much but I can tell you this speaker gets LOUD. Better still, even at max volume neither my brother-in-law nor I heard any distortion. And with the Boom on the table next to me half volume was almost too loud. As I noted in my review of the MiPow Boom mini it is the result of MiPow not simply pulling speakers off the shelf and putting them inside a unique container. No, MiPow engineered the MiPow Boom from start to finish and it shows… And sounds.

Most portable speakers do a decent enough job of letting you listen to your music on the go but, after a while they become a bit taxing on your ears. That’s not something I initially noticed with these small speakers but the more I use and review them the more I notice this sort of ear fatigue. Here’s the thing- I don’t notice that at all when listening to the Boom. That is a direct result of the quality of the audio the Boom is able to pump out. And that even holds true when listening to music streaming off an iPod nano via Bluetooth. Imaging how good it sounds when using lossless files and a wired connection!?! 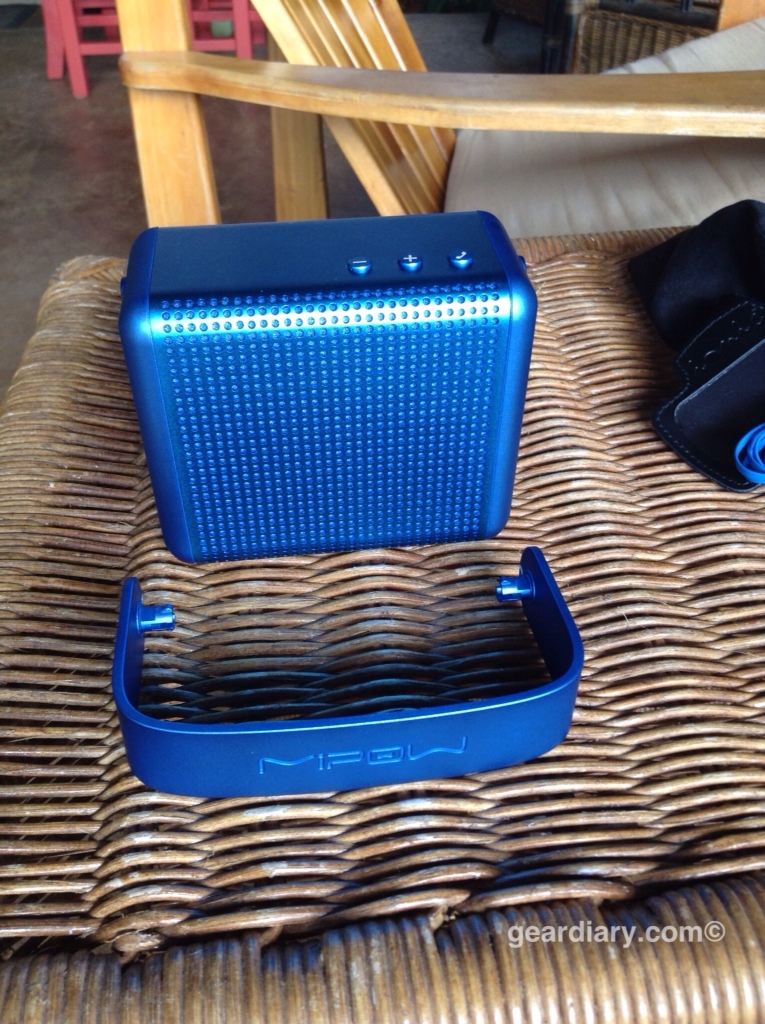 Handles not your thing? No problem

As noted, the MiPow Boom has a detachable handle. That makes it easy to carry but does have a bit of a “clutch purse” look to it. If that bothers you it is easy enough to snap the handle off and simply have the speaker. I do, however, wish the company included a protective bag so you can throw the Boom into your gear bag and not worry about it getting scratched up. 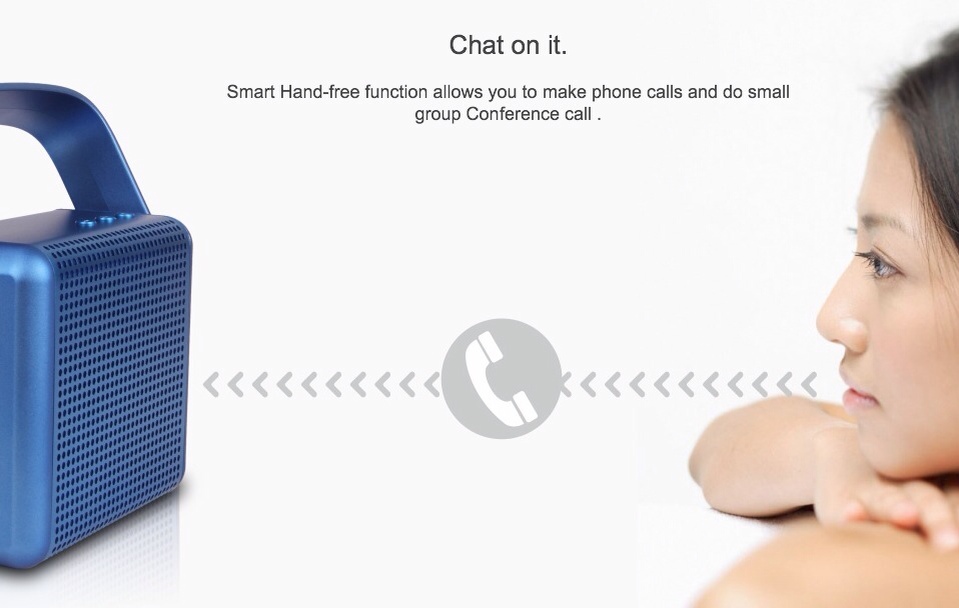 The built-in microphone isn’t necessary but it is a nice addition to an already impressive speaker. No doubt some would cry foul if this feature were not included.

Detachable handle suitable for indoor and outdoor use

So what do I think of the MiPow Boom Bluetooth speaker? Honestly I think this speaker stands out as the best portable Bluetooth speaker currently available. It is small, gets amazing battery life and sound great, especially for something this small. The build quality is terrific and the ability to easily pull off the handle lets you use the speaker in the way that is best, and most aesthetically appealing, to you. I’m personally not in love with the blue color of the review sample I was sent but if you like bright, colorful speakers you will be quite happy. We’re I buying a MiPow Boom I would go for black but that’s just me. The most impressive thing about the speaker is that something this well-constructed and great sounding is well under $150. That makes it significantly less than the speakers against which it competes without cutting corners. Yes, I wish it included a carry bag but that is my only issue with this speaker. You can learn more here.

What I Like: Small; Amazing sound for the size and price; Detachable handle; Better than promised battery life; Simple controls; Did I mention the amazing sound?