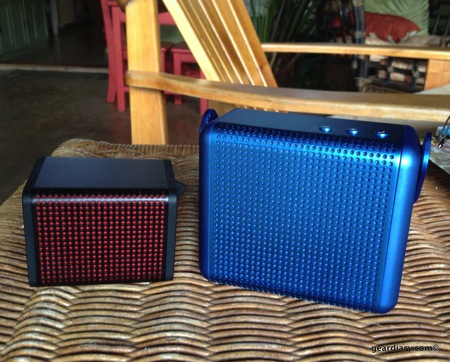 I will admit to having gone into my review of the MiPow Boom and MiPow Boom mini Bluetooth speakers positively inclined toward both products. After all, when Judie and I met with Brian Holmes,  vice president and general manager of MiPow, back at CES in January we were immediately impressed by the attention to quality and detail the company put into their mobile accessories.

During our meeting we got to check out their range of external batteries and liked what we saw. We learned about their Bluetooth headsets and were anxious to try them out. And, at the end of CES, we heard their upcoming speakers and had a hard time believing the audio quality that came out of each. I received near final production samples of both the MiPow Boom and MiPow Boom mini the day before I headed out on vacation, so I brought both with me. I write “near final production samples” because the hardware is done, but a tiny bit of tweaking to the audio side remains. Listening to the speakers you would never know it unless, like me, you were told they were not final products.

In this first of two reviews, we’ll look at the smaller of the speakers — the MiPow Boom mini. Part two will focus on the larger MiPow Boom. 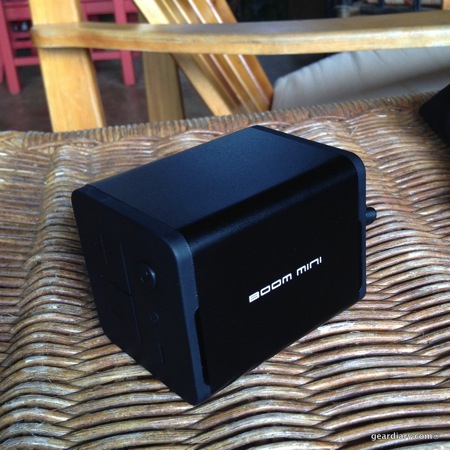 Yeah, this speaker is small. That’s why it is so surprising to learn that it not only packs some of the latest technology inside, but it also sounds anything BUT tinny. 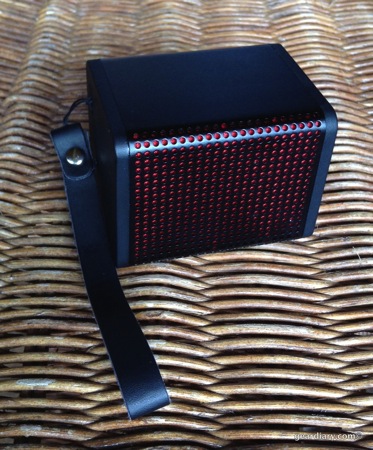 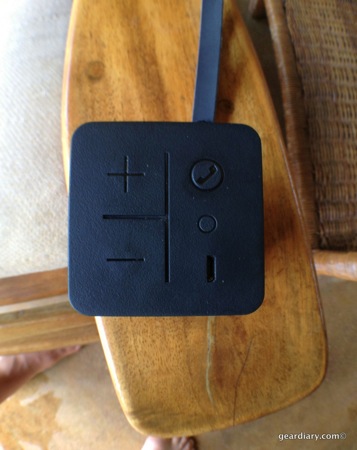 If you want to use the MiPow Boom mini with a device that does not have Bluetooth (or you simply don’t want to go wireless for whatever reason), the speaker has an AUX-in jack and ships with a cable so you can do a hard connection. My review sample shipped with the 3.5mm to 3.5mm cable but did not have the 3.5mm port cut out. It is, as I mentioned, a pre-production production unit.

The MiPow Boom mini has just a 650mAh capacity battery. That isn’t a large battery by any stretch, but it is still large enough to supply 12 hours talk time and 3-5 hours continuous music play. I have not had a chance to verify it yet, but I think I am getting a good bit more than 3-5 hours of music. 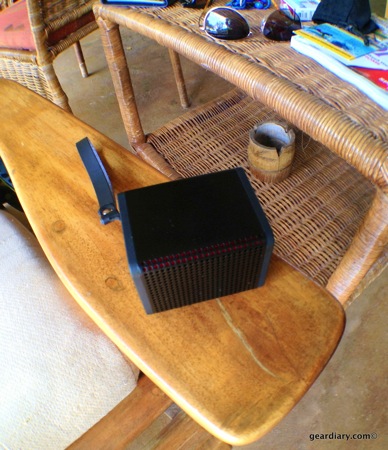 Physically, the MiPow Boom mini is unassuming. It is a small rectangle of anodized aluminum alloy with rubber on the sides and bottom. The bottom material keeps it from slipping, while the side material makes it easy to grab and hold. And it gets better since the MiPow Boom mini ships with a (not so easily) detachable leather strip. That means you can carry it with you without fear of dropping it along the way.

My review sample of the MiPow Boom mini came in black. I like that since it allows the small speaker to slip into the background. If color is your thing, there will be a range of bright colors available. 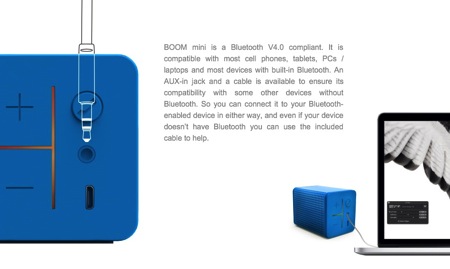 Controls on the MiPow Boom mini are kept to a minimum. On the right side you will find the microUSB port for charging the device (it ships with a cable), the 3.5mm Aux-In port and the on/off/pause/call multi-function button. In other words, if you are fond of single-function buttons you are not going to be happy. Toward the front of the right hand side are the volume up and volume down “areas”. I write “areas” because they aren’t really buttons in the traditional sense. The volume up and down areas are separated by a thin slit that glows when the speaker is in use. the volume area and rear ports and controls are separated by a similar slip. Together this glowing “T” adds some subtle visual interest. 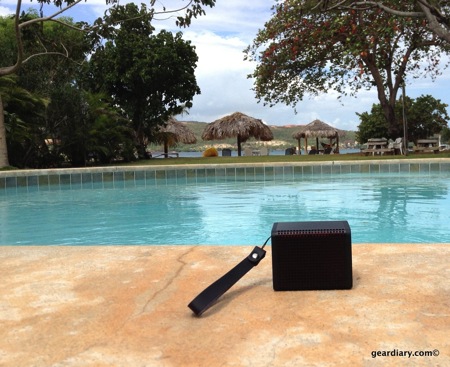 All this is good and well, but the MiPow BOOM mini is, after all, a speaker. So how does it sound? Honestly I think anyone who hears it will be impressed. I know everyone I have shown it has responded with some version of, “Oh my!!!” I even had a few people listen to it without first seeing it. they were impressed enough. Then I had them open their eyes. Each time the response was something like, “No way!?” That was always followed with “How much and where can I buy one?” Yes, the MiPow Boom mini is that good. It puts out 3 watts of power, but that is only part of the story. You see, as Brian explained to Judie and me in January, they didn’t buy speakers off the shelf and put them into a cool shell with a battery. No, MiPow took extra time and went to the extra expense to build their speakers pretty much from the ground up. They then spent the time to make sure the MiPow Boom mini was tuned properly. It shows. The speaker gets loud and sounds impressive for a speaker of any size. And considering just how small it is I really feel I need to use the word “amazing”. Is it going to be your new home audio system? Of course not, but if you are in the market for a small Bluetooth speaker that sounds good and is significantly less than $100 this will likely be the speaker for you.

What I Like: Small in size but big in sound; Easy controls; Comes with a wrist strap; Reported to get 3-5 hours of playback but I’m seeing significantly more; Doubles as a speakerphone; Sounds fantastic!

What Needs Improvement: Doesn’t ship with a protective case