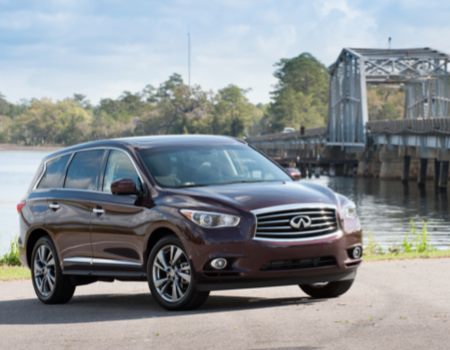 In recognizing its behemoth QX fullsize SUV is not for every family, Infiniti has delivered a more of a “right-sized” crossover to meet the needs of families who, in their words, recognize the need to grow up without growing old. Enter the 2013 Infiniti JX35.

Cross-developed with the new Pathfinder seven-passenger from Nissan, JX delivers interior flexibility and roominess, safety, three-row seating, performance and a host of hospitality features in something of a familiar package to its customers. 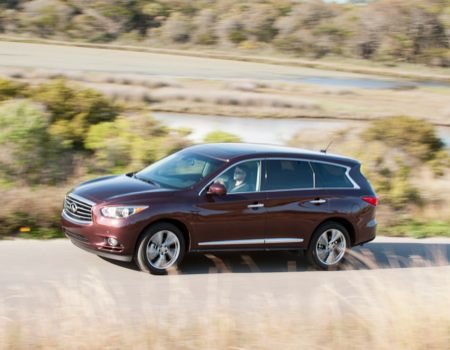 Inside and out, JX exudes Infiniti design, style and content while benefitting from corporate research and development along with dipping into shared parts bins, the latter being mainly in the form of the powertrain consisting of a 3.5-liter V-6 engine mated to CVT gearbox that deliver performance almost identical to what we saw when we were introduced to the Nissan Pathfinder last fall.

The big new Infiniti crossover rides very stable and smooth, and this proven engine and transmission combo work well together to not only deliver smooth and quick acceleration (a la 265hp and 248 lb. ft. of torque) but fuel economy figures of 18 mpg city and 24 mpg highway as well and the new JX35 is offered in front- or all-wheel drive. While 18-inch wheels and tires are standard, the vehicle can be outfitted with 20s (as our tester was thanks to the Deluxe Touring Package). 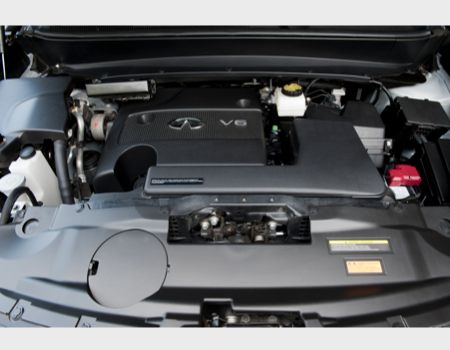 Some new technology finding its way onto JX is the Backup Collision Intervention, which can detect vehicles approaching from either side when backing and warns drivers visually, audibly and with gas pedal force feedback of impending danger and can even apply brakeforce if necessary action is warranted. JX also features Infiniti’s Around View Monitor with Moving Object Detection designed to provide a 360-degree ring of protection when starting off or backing.

Infiniti includes a host of other safety technologies in the new JX, including Blind Spot Warning and Intervention, Lane Departure Warning and Prevention, Intelligent Cruise Control with Distance Control Assist, Forward Collision Warning and Intelligent Brake Assist – all of these on top of the full host of systems modern automobiles are already required to include. 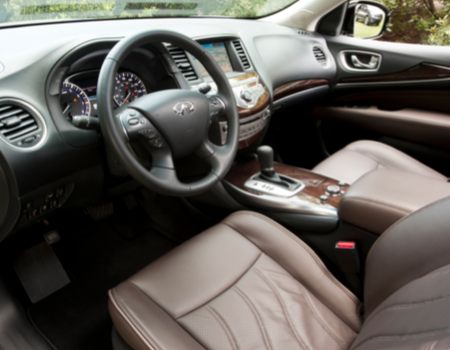 The interior is bathed in beautifully crafted leather and wood with power amenities at every reach. A standard seven-inch monitor provides most of the information for occupants, with the premium package upgrading that to an eight-inch display. Thanks to the theater package, rear occupants were treated to dual seven-inch monitors located in the rear of the front seat headrests. For me, the highlight inside was the Bose Cabin Surround audio system, that I eagerly ran through its paces each time I was behind the wheel.

The JX35 has done very well for the automaker and has become one of its top sellers. Pricing starts at just a tick over 40 grand, with our loaded FWD tester arriving with a final sticker of $54,070. 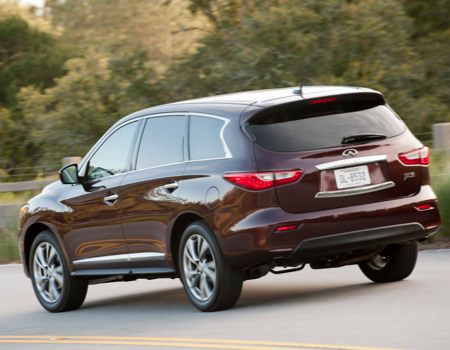 As the arrival of the 2014 models approach, Infiniti has decided to throw a curve ball by re-naming the JX as the QX60; a hybrid variant will be joining the line as well.