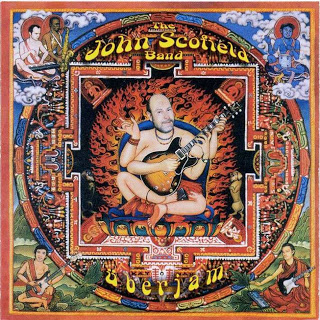 How often do we hear about an album getting a real ‘sequel’? Well, actually it has become a bit of ‘a thing’ in rap in recent years, but for the most part the results show it is an ill-advised trend at best. And Meatloaf started with a classic and ended up with a second sequel that included Celine Dion covers. So the history is not great! But now legendary jazz guitarist John Scofield is set to release UberJam Deux on July 2nd, so I wanted to go back and look at his 2002 release UberJam.

In the jazz world, there are artists who are consistent but predictable and artists who are unpredictable but inconsistent. John Scofield, meanwhile, is an impressive example of a jazzman who is both unpredictable and consistent. You never know what the risk-taking guitarist will do from one album to the next, but he rarely provides an album that is flat-out disappointing. Überjam is a major departure from 2000’s Works for Me, the Verve date that preceded it. While Works for Me is essentially a straight-ahead post-bop outing and employs acoustic-oriented players, like pianist Brad Mehldau and bassist Christian McBride, Überjam is pure, unadulterated fusion. This album always has a jazz mentality — Überjam is as spontaneous, free-spirited, and uninhibited as any bop session that was recorded in Rudy Van Gelder’s studio in the ’50s — but on Überjam, having a jazz mentality doesn’t mean excluding elements of funk, rock, and, at times, hip-hop and club music.

I distinctly remember when Uberjam came out in 2002, because it was two weeks before the Pat Metheny Group recording ‘Speaking of Now’ that I had been anticipating for months. It is interesting how things ebb and flow with regards to music through the decades, but for a long time (since ~1987) I had lost interest in the Pat Metheny Group recordings, preferring Pat’s solo and collaborative works. At the same time, I was a huge fan of the varied work of John Scofield, whose career I had followed closely since I happened upon ‘Shinola’ in 1981 because Steve Swallow was the bassist.

But in the late 90s things changed – I enjoyed Metheny’s group work more as they shifted gears from the ‘Latin pop-jazz formula), and was less interested in Scofield’s ‘straight ahead jazz’ work, particularly his collaborations with Joe Lovano. So as 2002 began, my interest was clearly focused on ‘Speaking of Now’. And it is an excellent recording, the best from the group since ‘First Circle’ and has remained one of my favorites of the group for a decade now.

But Uberjam was something else entirely. It became my most played album of the year, is something I can share with my family, and is my overall favorite recording from Scofield.

Why? Because it starts with some new techno-funk backbeats and heavily effect-laden guitar and drums, and combines the funky jam-band vibe of some of his Medeski Martin & Wood collaborations, incorporates the broader melodic and harmonic learnings of his straight-ahead years, retains his jagged phrasing from his early pre-Miles years, and threads in some of the cool stylings of the Blue Matter days. In other words, it takes everything good he had ever done and adds in

The album starts with ‘Acidhead’, with a mystical sitar feel with swirling guitar and other effects in the background that takes more than a minute and a half to drop into a groove, and just never lets go. The song is slow and methodical in drawing you in, but once there you are locked in the groove. The song has a great melody with a subtle chorus that is a reminder of how Scofield incorporates new and old all at once. But it also shows how Scofield has grown as a soloist, transcending stylistic boundaries and combining genres effortlessly.

There are a few songs that are not as high a level as the rest, but would have been some of the best work on earlier albums, and the second song ‘Ideofunk’ is one. It is another cool groove, but with too heavy and simplistic of a structure on top. It is a solid song, just not one of my favorites. Frankly it suffers too much from its surroundings. I fing the same true for ‘Tomorrowland’ later on the album. OK, so that is two songs, not ‘a few’.

The third song, however, is sublime. Breaking right into a melody that also lays out the rhythm and harmonic structure, we have the pattern of stop-time shuffles with a laid back bass over an urgent drum track. One thing I love is that the composition slowly reveals its secrets, and we don’t know everything it offers from more than two and a half minutes. Just when we think we have the feel, Sco gets subtle and shifts gears with some beautiful lines that slowly build up into the next break when he just have notes tumbling over each other. The intensity just continues climbing for the rest of the song without any concern of a central harmonic theme … it is incredible.

There are other amazing songs – ‘Offspring’ has an acoustic thread that reminds me of some popular songs of the era but not directly, and also shows off the effective stereo spacing of the multi-tracked guitars. It captures the ‘jam band’, yet is very much jazz and a signature Scofield piece, but then brings in loads of techno rhythm drops. And the building of intensity is hypnotic in how slowly it starts and how majestically it sweeps through.

The title track ‘Uberjam’ has some of the most stunning and dazzling guitar work Scofield has ever done, yet like everything else on the album it is never showy or out of place. Some of the lines thread across time and space, keeping you on edge as they resolve. It is another great funky jam that starts in one place and ends in another with little regard for maintaining a central theme, and yet everything makes sense.

Everything else on the album is equally worthy of praise. ‘I Brake 4 Monster Booty’ is a fun little bounce-groove with some great guitar work and a cute rap chorus. ‘Animal Farm’ is infectious and the heavy emphasis on effects and non-musical noise is actually very effective playing against the simple structure. And the closing three songs – ‘Polo Towers’, ‘Snap Crackle Pop’, and ‘Lucky for Her’ continue all that was great about the rest of the recording. The album closes with ‘Lucky for Her’ devolving into non-musical noises and guitar effects that had been building during the song and been present all through the album. It is am journey that lasts an hour but is an amazing experience.

‘Quick Hit’ Song: “Snap Crackle Pop” – OK, so I am just grabbing any one of five songs that represent the album and are a blast. Why this one? Because the opening has snapping, the crackle of the rhythm section and the pop of the snare. This remains present throughout, but the song itself goes in a dozen directions – including backwards for a while!

Would I recommend?: Absolutely! As I said, this was an immediate favorite, and remains something I frequently enjoy. I have given it repeated listens for this review, and it holds up amazingly well where so many other artists employing techno stylings seem dated or quaint.

Suggested audience: Scofield’s music has always appealed to mainstream jazz fans as well as those more inclined to rock and fusion. With Uberjam he attracts an even broader audience, bringing in techno, funk and jam band fans.

Here is a live (audio-only) version of Offspring: