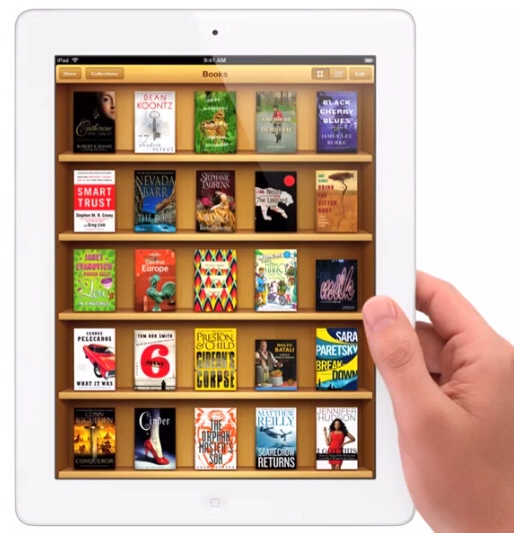 In 2009, several major publishers announced a huge pricing change for eBooks; retailers would sell them only at the price set by the publisher, and no one could apply any discounts or coupons. The move was anti-competitive and clearly aimed at attacking Amazon, but what really struck everyone was the company behind the curtain. Apple had just announced the iPad, and they seemed quite confident that the projected $12.99-$14.99 prices for iBooks would not be undercut, a suspicious claim since Amazon sold those titles for $9.99. The assumption was that Apple had worked with the publishers to create this price-fixed plan, and earlier this week the court system agreed and found that Apple had colluded in fixing prices. The effect of this price-fixing has been huge, with deep repercussions across the entire book industry.

The main defense in all this was that the boogeyman Amazon was going to destroy them all if they didn’t take away competitive advantages. It was an awkward argument and one that the Justice Department and the court found to be specious and absurd. I think Apple simply saw a way to be dominant in another content area, and severely overestimated their own brand potential in a competitive market. The publishers, on the other hand, were trying to do something as old as time-they were trying to avoid obscurity, bankruptcy, or consolidation, the business equivalents of sickness and death. In doing so, they not only strengthened Amazon, but they also signed the NOOK’s death sentence and made breaking into the USA market even harder for Canadian bookstore Kobo.

It’s not hard to see how Amazon benefited all around from the pricing controversy. First, they came across as the victim, rather than the 800-pound gorilla of ebooks. Every time someone argued to the Justice Department or the court that Amazon would have been a threat, it sounded more ridiculous. This was akin to targeting a future bully on the playground and beating him up before he actually hurt anyone. Amazon was doing the same thing retailers have done since the beginning of capitalism; they sold items at the lowest price possible to attract customers. Clothing retailers aren’t lined up outside Walmart to complain about clothes being sold at low prices, but because Amazon did it for books this was a major offense. The break from friendly relations with publishers also gave Amazon a reason to branch into their own publishing business, which has proven to be fairly successful for authors and popular for consumers, especially when paired with an Amazon Prime account for free monthly ebook lending. Most importantly, they took Amazon from a situation where they were selling Kindle books at a loss to one where they made money. Explain to me how you’ve hurt your competitor when you’ve improved their profit margin!

On the other hand, it’s looking like the same move of fixing ebook prices may have killed the NOOK. The problem B&N faced when they entered the ebook market was clearly Amazon and their deep discounts. But B&N had held their own with physical bookstores, running promotions and offering a paid membership that offered discounts and other perks. They announced the NOOK, and slowly captured some of the ebook market from Amazon. It helped that they had the old legacy eReader and Fictionwise businesses supporting their ebook venture while NOOK slowly inched up in popularity. Unfortunately, when the price-fixing hit, it took with it all the traditional tools B&N could use to fight Amazon. eReader and Fictionwise lost many of their discounting programs, B&N couldn’t roll ebooks into their membership discounts, and now their prices were exactly the same as everyone else. They had to compete on hardware and their bookstore experience because content ceased to be a differentiation point. While they held their own with the original NOOK Color, Amazon’s Prime-focused Kindle Fire line has proven to be stiff competition. And if your books are all the same price as the competition, then the price of your hardware becomes even more important. The lower the barrier to entry, the better, and so B&N has been selling ebook readers and tablets at near-continuous sale prices and promotions. They also had to work doubly hard to promote ebook readers in-store, which turned into something of an awkward sales pitch: “Buy this product and never come back to this store again”. NOOK has become a strain on their bottom line, and the poor performance of the digital business is likely why CEO William Lynch abruptly left the company. It wouldn’t shock me if B&N sells off NOOK entirely and just doubles down as a physical bookstore company. NOOK has had headwinds from genuine competition and artificial price fixed pressure for years-can you blame B&N if they don’t want the headache anymore?

Now, if you are reading this and thinking “Who’s Kobo?”, well, you wouldn’t be alone. Kobo is a Canadian ebook company that looked like they might give Amazon a run for their money before the price-fixing kicked in. See, Kobo was big on coupons; buy a book, get a 10% off coupon. Buy two books, get one free. Like Amazon, they were big on free books and discounts to attract customers, but they lost all of that in a fixed environment. Like B&N, it left them scrambling to stand out with ebook hardware, and while they had a few retail partners it has been an uphill battle. It doesn’t help that their main physical bookstore alliance in the United States was Borders, meaning Kobo was left with the job of migrating users out of the Borders branded wreckage and into Kobo’s store, without losing customers to Amazon or B&N, a difficult task. Kobo is owned by Rakuten, often considered the Japanese version of Amazon (and the parent company of the old buy.com), so they have the benefit of a parent company with deep pockets and a global footprint. Outside of the United States Kobo has been expanding right along with Amazon, and I have more confidence in Kobo surviving than NOOK, but it will be a tough and slow process, one that was definitely made more difficult by the price fixed environment.

Apple’s loss in court caps a terrible time in book retailing history. Publishers wanted to prevent something they saw as inevitable, and the repercussions have ended up being worse for them than what they had feared would occur without intervention. Amazon is still dominant, but their competition is busy treading water. It’s harder to innovate the reading experience, and the people and companies who are innovating are in self-publishing. Traditional publishing tried to stop the inevitable, but all they’ve done is further weaken themselves, strengthen their rivals, and harm consumers. Hopefully, with these legal battles on the way to being settled, we will see publishers think more about the ebook experience and how to improve it, rather than how to stifle it!