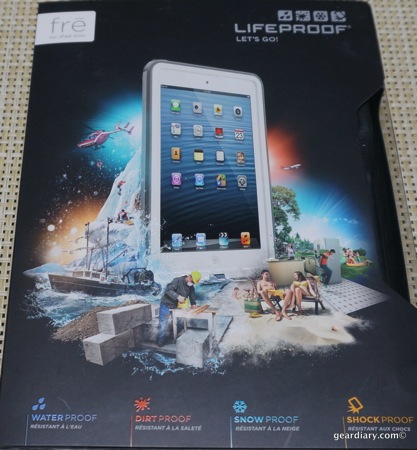 If you are like me – or Judie – or Mike – your iPad mini is with you pretty much all the time. And while it is a rather solid device (Apple does happen to make some of the most refined and sturdy mobile devices on the market) the iPad mini is still a relatively delicate piece of electronics. Especially during the summer you are going to want to protect it and, until recently, your only way to get maximum protection was to put the tablet inside a big, heavy, bulky case. It’s no surprise that Lifeproof has fixed this issue and will now enable you to protect your iPad mini without adding a tremendous degree of bulk to the small, light tablet. The Lifeproof fr? for iPad mini is a surprisingly thin and light case for the smaller iPad yet it still delivers the four different types of protection for which Lifeproof is known. As the company states

Let’s take a look at the case on video and then dig a little bit more deeply into it with a written review.

Waterproof up to 6.6 feet for up to one hour

Built to withstand drops of 4 feet

What is particular striking is that Lifeproof still tests every single case to ensure it is waterproof before packaging and shipping it. 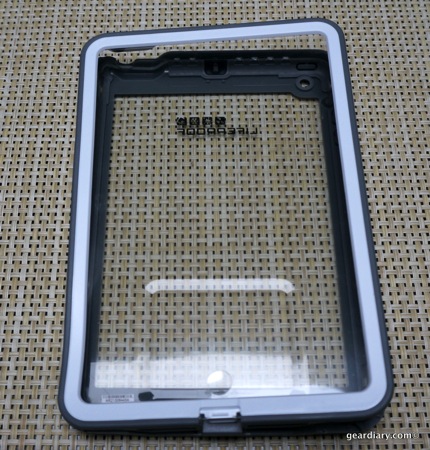 If you have ever used a Lifeproof case the fr? for iPad mini will be immediately familiar to you. Its design is a bit more refined than their offering for the larger iPad but it has the same basic structure. There is a bottom layer into which the iPad is placed. In this case the back of the case is clear with the actual frame being opaque. I’m not quite sure why the company decided to make the back portion of the case clear but it does allow you to see the Apple logo which I assume some people actually care about. (I’m not one of them.) 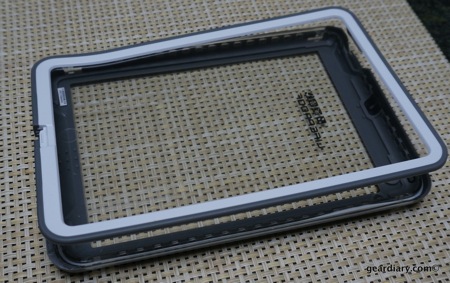 The front portion of the case is a screen protector with a white or black bezel running around all four sides. Unlike the larger iPad case this case does have a screen protector built into it. I assume that is because the iPad mini has a far narrower bezel running along both of its sides. While the larger iPad has a thick bezel around the top bottom left and right sides which allows for the case to press against the screen and create a good seal my suspicion is that the bezel is just too narrow on the iPad mini to make that possible. 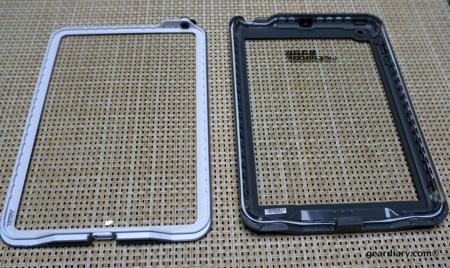 Some may not be as happy about this but I couldn’t care less. All that matters to me is that when my iPad mini is inside this case it is protected and – it is. 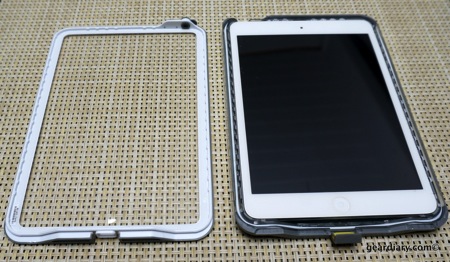 The first step in putting the case on your iPad is, of course, to test it out. My way of doing that is to place some tissue paper inside the case, seal it, and put it into a bucket or the sink with a light weight on top to hold it beneath the water’s surface. If there are no bubbles you can be pretty confident that the case is sealing properly and you are good to go. 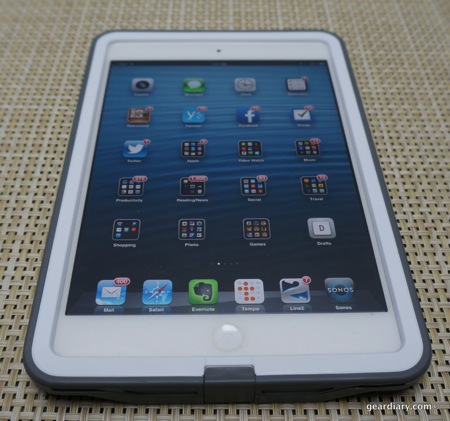 The iPad gets laid right into the back portion of the case. Of course you want to make sure that it seated properly in it so that the screen side will snap properly and create the proper seal. Unlike previous Lifeproof cases there is no screw stopper for the 3.5 mm headphone jack. We’ll address that in a bit but it’s worth noting that you don’t need to unscrew that plug before placing the case on the iPad.

From there you simply place the screen side of the case over the iPad and slowly press down making sure that the entire seal is locked into place with at any point.

As you can see it makes for a nice package and the white frame of the case goes well with my white iPad mini.

When the lightning connector is sealed the bottom portion of the iPad mini is nice and sleek. 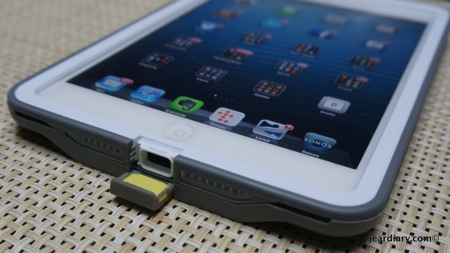 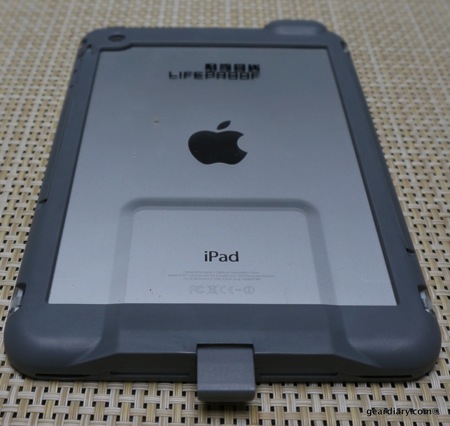 As noted, the back of the Lifeproof fr? is clear which allows the Apple logo, iPad name and the legalese beneath it to show through. Of course Lifeproof put their own name and logo at the top. It does create a rather clear statement about how Lifeproof sees itself tightly aligned with Apple. (Although they are branching out into devices from other manufacturers.) 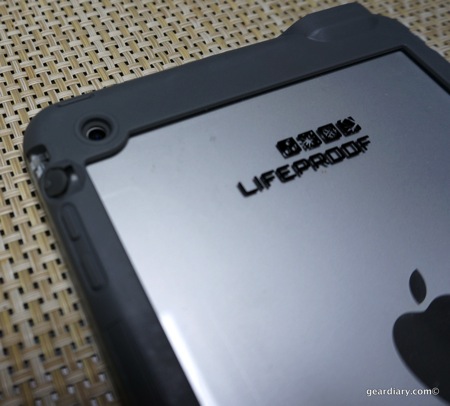 There is a hole for the iPad mini’s camera as well as a toggle for the mute switch. It works just fine although it is obviously not quite as sensitive as the mute toggle when it isn’t covered over. Volume up and volume down buttons are also easily accessible through the case. 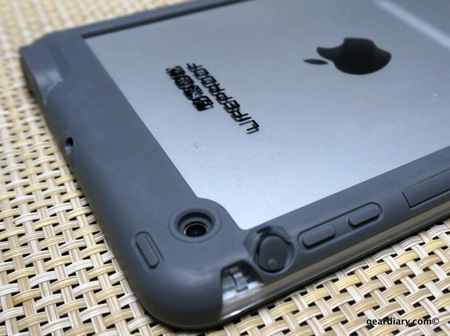 Here’s another look at the camera cut out, mute toggle, volume buttons, sleep or wake button, and one other aspect of the case that will address in a moment. 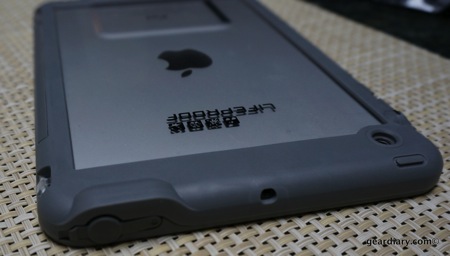 Here’s a look at the top of the case. As you can see there is a cutout for the microphone (obviously it’s internally covered so the case is waterproof) and the plug before the 3.5 mm headphone jack. While I have some concerns that this plug may not be as effective over an extended period as the earlier version which screwed into place I am happy about the ease with which it can be used and the fact that it remains attached to the case. After all, I’ve lost numerous Lifeproof iPhone case headphone plugs over the last two years.

There are accessories on the way and we will keep you posted about each of them as they are released. One nice aspect of this case that I haven’t yet mentioned is the inclusion of a hand/shoulder strap in the box. This was a separate purchase if you were using Lifeproof’s case for the larger iPad and the fact that they opted to simply included with this case is a nice bit of added value. I don’t see myself using it all too often but it’s nice to know it’s there if I want to. And the fact that the connection points are built right into the case is another bonus.

What surprises me most about Lifeproof fr? for the iPad mini is that it doesn’t feel like a heavy-duty waterproof case. It is thin and light and doesn’t really get in the way of the comfort when carrying the tablet or the effectiveness of actually using it. It really reflects the fact that Lifeproof, which was terrific in its initial offerings, has really learned a great deal about making the best rugged and waterproof cases on the market. I am in Pennsylvania for the next few weeks and spending a good deal of time on the dock down by our Lake. I use my iPad mini for reading much of the time and knowing it is protected in this case gives me a great deal of confidence. While I certainly won’t intentionally toss my iPad in the water or drop it I’m glad to know that, were either of those to happen, the odds are my iPad will be just fine.

Yes, this is a rather pricey case but it is far less expensive than purchasing a new iPad. You can learn more and order yours here on the company website.

What I Like: Great protection “Lifeproof-style” without too much added weight or bulk; Screen and buttons remain completely functional; Lighter than you might expect considering the amount of protection; Includes shoulder strap;

What Needs Improvement: Pricey; Unlike the Nuud for the large iPad the screen is covered; Screen films can create a bit of unevenness visually