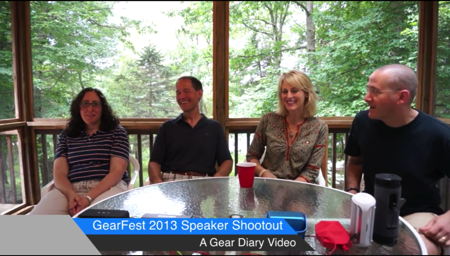 At GearFest 2013, Judie, Mike, Carly, and I sat down with a number of Bluetooth speakers to do a blind test listening to two pieces of music Travis had put together. (Thanks for jumping in to help us Coach!) With Mike’s wife Lisa helping us out (and offering up a few dance moves at the beginning of the video), we listened to six different Bluetooth speakers that have previously been reviewed here on the site. The speakers included:

Which speaker came out on top? Which surprised us? We’ll give you a bit of a spoiler.

A. We had trouble getting the JawBone JamBox to play nicely, so it didn’t end up in the mix. From an audio standpoint it has been eclipsed numerous times, and we were sorry we could not get that on video.

B. The Scosche BoomBOTTLE is an impressive speaker, and it stands out thanks to its design and somewhat ruggedized specs. It surprised me when I did the review, and it did a repeat performance here by standing out as one of the better speakers in this lineup.

C. The MiPow Boom didn’t stand out nearly as much as I expected it to. It really is an impressive little speaker, and the battery life both the Boom and the Boom mini offer is spectacular. I suspect the failure of the Boom to stand out had to do with the audio settings on this unit not being a final production version; but fair is fair, and it didn’t end up being picked as the standout speaker. We have a final unit on the way, and we will test the two versions of the Boom out in a comparison post.

D. Was there a standout speaker? Yes! And it was not only consistently picked by the editors as the standout, but it has an MSRP of under $100. Moreover, when it is on sale you can get it for even less!

Which speaker was it? Check out this video demo.