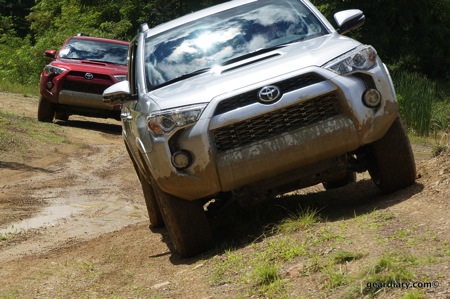 During this week’s Press Preview of the 2014 Toyota Tundra and 2014 Toyota 4Runner, we had a chance to spend some “quality time” in different models of each truck. And while we spent some time with the trucks on nicely paved roads, we also had a chance to go off-road with both vehicles. The event took place on the grounds of the Nemacolin Woodlands Resort in Farmington, PA, a gorgeous resort set on 2,000 wooded acres in the Laurel Highlands of Southwestern Pennsylvania.

Here’s a small taste of what it was like off-road in the 4Runner.

Toyota had a series of specific goals in mind for the trim of each grade of the 2014 4Runner.

For the entry-level SR5 they sought to maintain the same MSRP while improving the value and adding new standard items such as 13CY Entune Audio Plus, a backup camera, projector headlights, a power seat for the driver, a leather steering wheel and new 17″ wheels.

The goal for the 2014 4Runner Trail was to reposition the Trail with a lower MSRP while keeping the same off-road equipment. The MSRP for each model has not yet been released but will be available shortly.

The goal for the 2014 4Runner Limited was to add premium features such as Entune Premium JBL audio, front and rear parking assist sonar, a ventilated driver and passenger seat with memory and much more.

On all models, Toyota has made changes to the frame that contribute to the overall vehicle stability, made brake hoses more rigid to optimize brake feel, enhances trailer sway control and taken steps to enhance interior quiet.

We’ll have more to share on the experience of driving both the 4Runner and the Tundra but, for now, here are a few images from the Preview Event.