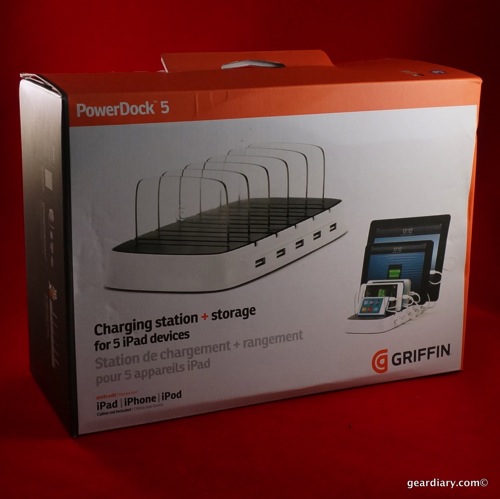 Are you, like me, finding the gadgets in your house multiplying? Our home now has an iPad mini, iPhones, an iPod touch, an iPod nano, Kindles and assorted review samples. All need charging and Griffin’s PowerDock 5 promises to be the one-stop charging solution. For just under $100 you can charge 5 devices at once! How awesome is that?

My house had become a mess of wall adapters and cables prior to the arrival of the review sample of the Griffin PowerDock 5. At times I would have to play “musical iOS devices” and rotate which devices was being charged. At other times I have had the majority of the outlets in any given room taken by wall adapters for this device or that. It was… a mess.

After seeing Judie’s writeup of the Griffin PowerDock 5, I knew this would be one possible answer. I was excited to receive the PowerDock 5 for a “second-look review”, and I hoped it would be the clean charging solution I had always wanted. It is … for the most part. 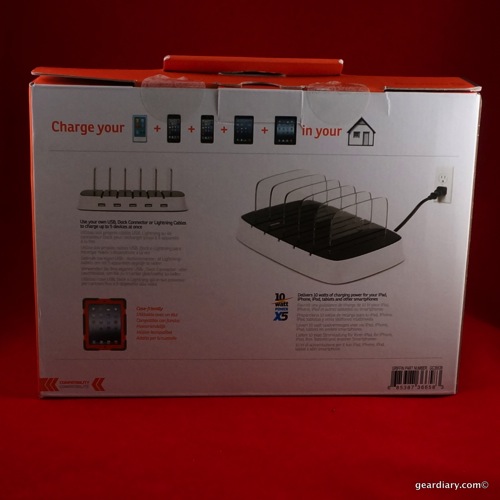 Setup was simple. I put each of the translucent dividers into its slot and pressed down. I plugged the AC adapter into a wall outlet and then into the bottom of the PowerDock 5. Next, I grabbed a few USB to Lighting and USB to microUSB cables and plugged them in. I then placed a few choice dividers into the various slots between the translucent dividers and plugged them in. Before I knew it I was charging multiple devices using a single wall outlet; it works as promised. My only issue with the device, in fact, is the fact that there are no cables included, and if you use standard length cables rather than pricey short ones you will have a bird’s nest of cables behind the PowerDock 5. If the tangle of cables doesn’t bother you, then it won’t be a problem. If it does, however, you will need to go out and purchase a few short cables. It isn’t a huge deal, but it is an added expense on an accessories that is already rather pricey.

After using the Griffin PowerDock 5 for a few days, I’ll have to concur with Judie’s review assessment. She wrote,

If you need a way to charge and neatly store your family’s devices, then the Griffin PowerDock 5 is a brilliant solution. If you are like me, a device-monger that is running out of room and always looking for a charging cable, then I feel safe saying that the PowerDock 5 is the solution that you have been waiting for.

I do, too! Learn more here.

What Needs Improvement: Pricey before savings in our Amazon Affiliate Store; No included charging cables