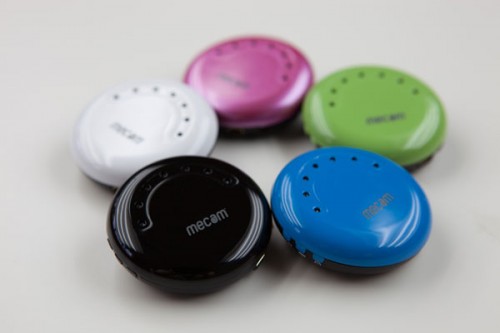 MeCam is a wearable 720p video camera that can also record video and has Infrared LED lights to be able to shoot in low light and dark conditions.  The small camera comes with a pin and a lanyard so it can be pinned to fabric or worn as a necklace.  The MeCam starts at $49.99 with 4GB of memory. 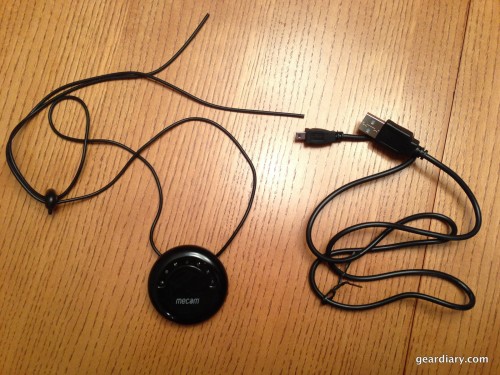 The MeCam with lanyard and microUSB cable.

Let’s start with the hardware, shall we?  The MeCam is disc-shaped with a lens and infrared LED lights on the front.  On the back, you’ll find a safety pin, which will secure the camera to your shirt or any fabric.  You’ll also find loopholes on the back which are to be used with the included lanyard to wear around your neck.  Around the circumference of the MeCam are the three buttons, the flash storage slot, and the microUSB port.  The three buttons turn the MeCam on, activate the shutter, and switch between IR and regular camera mode.  There is also a small microphone hole around the edge of the MeCam. 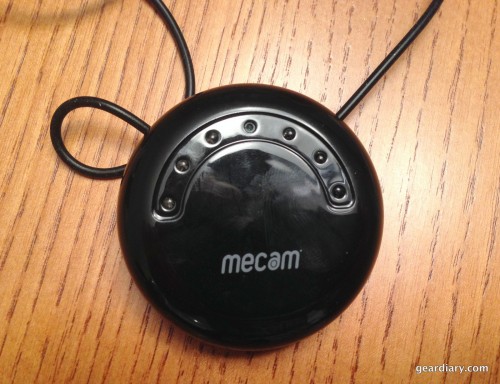 Originally, I tried putting the MeCam around my dog’s neck to see if I could record video from her point of view.  Unfortunately, the camera lens was pointed down due to the way the lanyard attaches to the top of the back of the camera.  Also, the footage was way too bouncy because our poodle tends to prance when she walks.  I had to settle for pinning the MeCam to my shirt and walking around myself.  Check out the test footage I got, below.

The MeCam shoots video in 720p and is also able to shoot 5 megapixel photos.  Unfortunately, the MeCam excels in neither.  As you can see above, the video looks grainy and always seems to have a reddish-pink hue to it.  The photos are unspectacular and also have a reddish hue.  Using the IR function in the dark is similarly disappointing, as you can only see anything when you’re very close-up, as you saw in the video sample above.

The MeCam is very small however, and incredibly light. This makes it a great gift for kids as well as the fact that it’s very durable.  The only reason I would be a little worried about giving the MeCam to a child is the sharp safety pin.  However, overall, it would be a great gift for a child because the MeCam comes in fun colors and children may not care about the lackluster video footage. 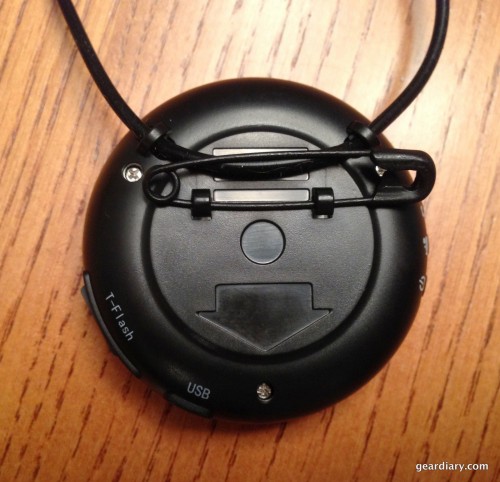 The back of the MeCam.

Transferring photos and video from the MeCam to a computer is very simple, as you just plug the microUSB-to-USB cable into your computer and the MeCam will show up as a drive.  Just drag the media to your desktop and you’re good to go.  You can also charge the MeCam through this microUSB port. 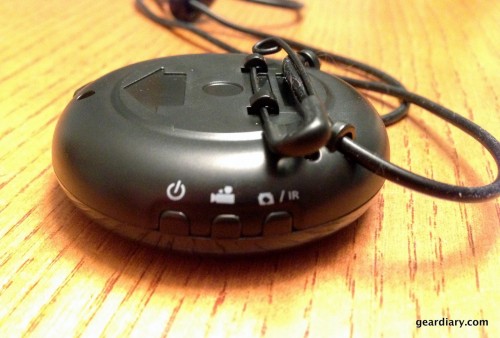 The side of the MeCam showing buttons.

I would absolutely recommend the MeCam for a child’s gift, but nothing more due to the poor video quality.

What I Like:  Very light; Small; Multiple methods of attachment; Great for kids.