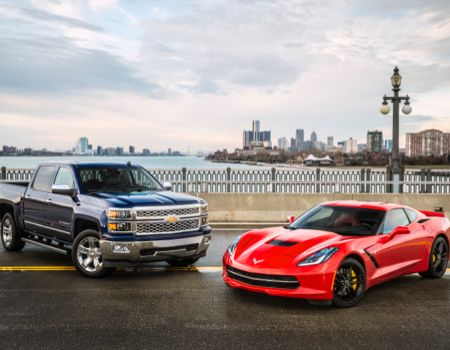 While it came as little surprise to us here at Gear Diary, the North American Car and Truck of the Year were announced as both being from the Chevrolet stable: The 2014 Chevrolet Corvette Stingray and Silverado 1500, respectively. The winners were announced at a ceremony that kicked off the 2014 North American International Auto Show media days in Detroit.

The NACTOY winners were selected by members of the automotive press and were whittled down from an initial group of 28 cars and 18 trucks/utilities that were all new or significantly upgraded for the 2014 model year. In September that list was narrowed to 12 each and from there 48 journalists from the U.S. and Canada voted from the Cadillac CTS, Corvette Stingray and Mazda3 as car finalists and Acura MDX, Chevy Silverado and Jeep Cherokee in the truck category.

Last year’s winners were the Cadillac ATS for Car of the Year and Ram 1500 as Truck of the Year. This is the first time Chevrolet has swept the awards. The Silverado last won NACTOY honors in 2007 and it has been since 1998 for Corvette.

For those of you who may have missed them, here are our reviews of this year’s winners:
2014 Chevrolet Corvette Stingray
2014 Chevrolet Silverado 1500