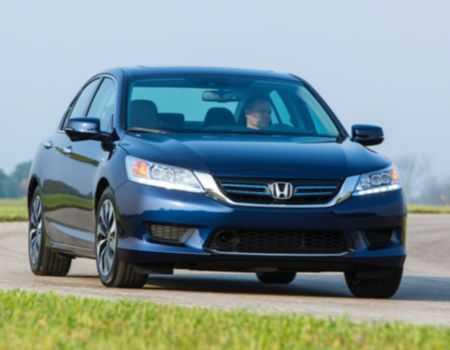 Last year we reviewed the ninth-generation Honda Accord sedan that quickly became one of our favorite new rides. Fast-forward a year, and we test the newest of that family in the form of the 2014 Honda Accord Hybrid with the most significant difference being the next-generation two-motor hybrid-drive powertrain and, just like that, Honda has another hit on its hands.

No sooner did Honda hand over the keys to a 2014 Accord Hybrid for us to test than word comes out its Insight hybrid-only model will be discontinued. It’s probably for the better, as the poor-performing (both in sales and fuel efficiency) Insight is significantly bested by the new Accord Hybrid in every criteria. 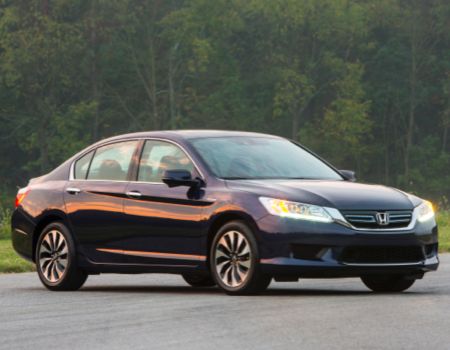 Aside from a few components being replaced with aluminum parts (front suspension sub-assembly and rear bumper brace), the Accord Hybrid is almost identical in features and amenities as the unit we reviewed last year, so for this piece I will mostly concentrate on the powertrain aspect, which is quite significant in itself.

Honda has gone to a two-motor hybrid drive system for the new model and pins it as part of the expanding Honda Earth Dreams Technology powertrain lineup. The new hybrid system, dubbed Intelligent Multi-Mode Drive (i-MMD) allows the vehicle to operate in EV, hybrid and engine drive modes allowing for the best performance and fuel efficiency on the road. Under most conditions the 2.0-liter inline four-cylinder gas engine powers a generator that provides electricity to charge the 1.3 kWh Lithium-Ion battery pack while also sending energy to the electric drive motor to turn the front wheels. Total system power output is rated at 196hp. 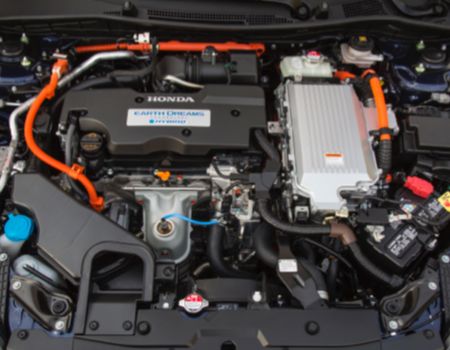 During low speed operation and stop and go driving, the Accord Hybrid will operate on battery power only or use the gas engine only to recharge the battery pack. At higher speeds the engine provides electricity directly to the primary drive motor. That motor turns the electric CVT gearbox which in turn spins the drive wheels and propels the vehicle. The i-MMD system delivers fuel economy figures of 50 mpg city and 45 mpg highway in the Accord Hybrid, which is some of the best on the market today. Our testing found these figures to be right on the money.

As I mentioned earlier, the new system has two electric motors. The primary motor handles most of the drive duties while also providing regenerative power back to the battery pack under deceleration conditions. The second motor can propel the vehicle during Hybrid Drive mode, and it can also restart the gas engine when the vehicle has been in idle-stop mode.

Despite only sporting a small gas engine, the new Accord Hybrid offers excellent acceleration and passing power since all torque comes from the electric drive motor making hybrid models feel even more powerful than their gasoline-only counterparts. 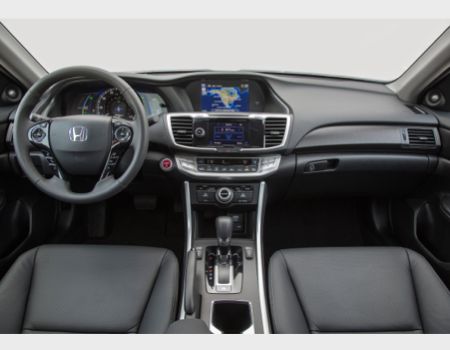 Honda is not putting a premium on the Accord Hybrid packaging by offering it only on the top-of-the-line trim levels. The 2014 Accord Hybrid sedan is available in base, EX-L, and Touring packages with MSRP starting at $29,155. Our recent tester arrived in full Touring trim with a final sticker of $35,695. Compare that to the V-6 Accord Touring we tested last year, priced at $34,220. 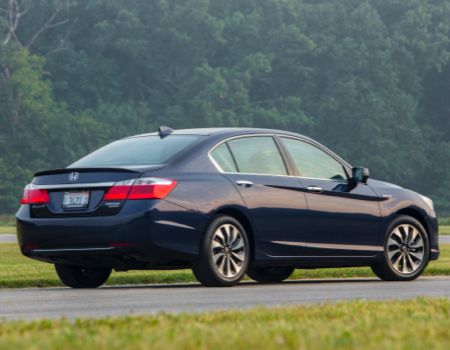 The new Honda Accord Hybrid is a hit, and it is racking up accolades and awards (and value) with every gallon of gasoline NOT burned.