Support scams have graduated to another level. If you use Skype, you’ve undoubtedly run across random scam messages which claimed you had a virus or  other security issue. In some instances, a Skype call would claim to be Microsoft support; in both cases the goal was to get you to pay the scammer to fix a non-existent problem.

This latest scam relies upon you mis-typing the Netflix URL, upon which you’re prompted to call Netflix support to reset your account. 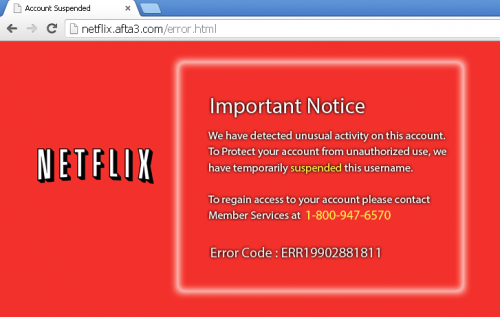 Jérôme Segura has a rather fascinating post documenting the steps the scammers take in order to gain access to your PC. In this attempted scam, the user was presented with an invoice (typed in NotePad on-the-fly) for $389 to fix a non-existent issue. The user was also asked for a photograph and an image of their credit card – because “the Internet is not secure”.

The moral of the story – be careful of mis-typed URLs, if you need to call support make sure you find the support line from a known source such as the site itself. And be cautious paying for any virus or computer repairs at the behest of such support centers.