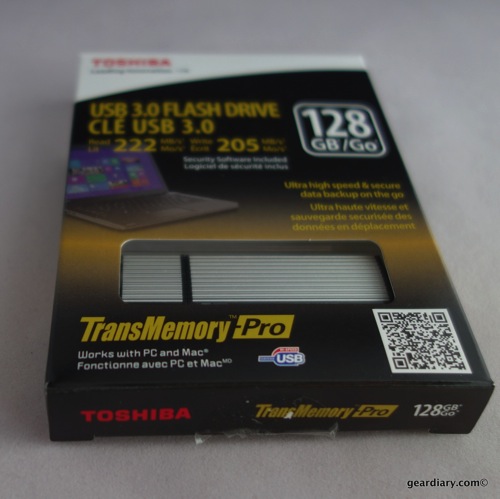 When I think back on how much I spent on small amounts of slow flash storage just a few years ago, I cannot help but shake my head. Who could have imagined there would be flash drives offering 128GB of USB 3.0 storage? That, however, is exactly what you get with the new Toshiba TransMemory Pro USB 3.0 Flash Drive. 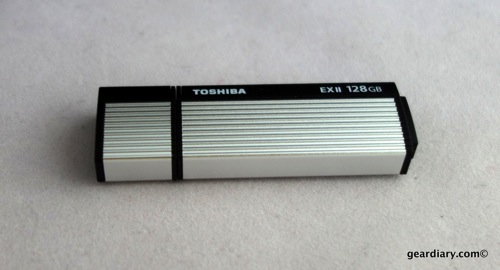 The Toshiba’s TransMemory Pro USB 3.0 Flash Drive 128GB USB 3.0 flash drive (also available in a 64GB version) looks like your standard stick flash drive, but it packs a huge amount of storage speeds that will blow your mind. The company reports that you can get read speeds up to 222 Mb per second and write speeds of up to 205 Mb per second. In my tests, that wasn’t far off from reality. In addition, the flash drive ships with security software that will help you create the files you keep on the drive so you can be confident that everything is safe and secure. Well that’s almost accurate. I’ll explain that moment.

The drive is advertised as working with Windows XP, Windows Vista, Windows 7, Windows 8, Mac OS 10.0.2 and above (USB 2.0 only). That’s almost true. Again… I’ll explain in a moment. 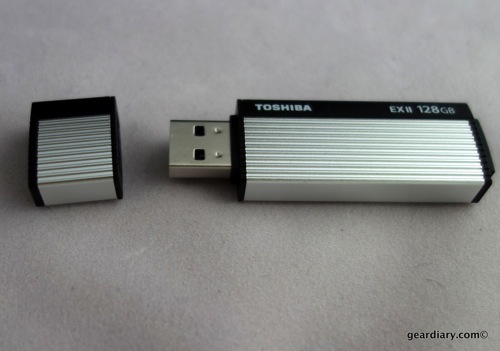 I tested the drive and found speeds that came close to the advertised Read 222 MB/s and Writes 205MB/s. 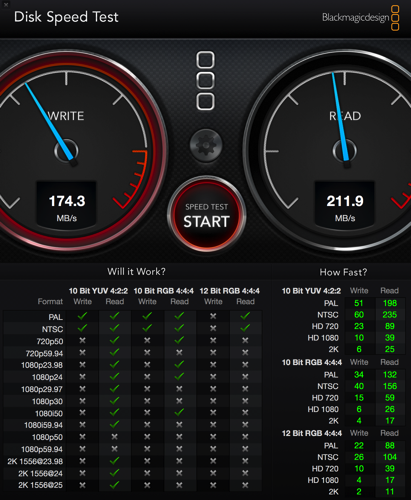 I would say that’s plenty zippy for most of us! 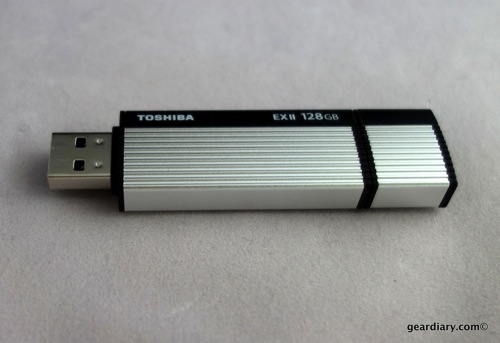 The aluminum body looks great. It is so thin and light that I initially thought it was silver-colored plastic, but I was pleased to discover that it is indeed aluminum. That speaks well to it enduring the bumps and bruises that comes with being thrown into a gear bag. 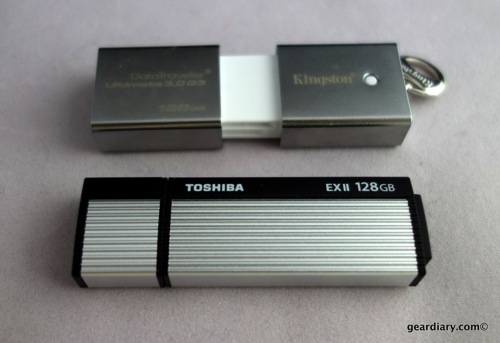 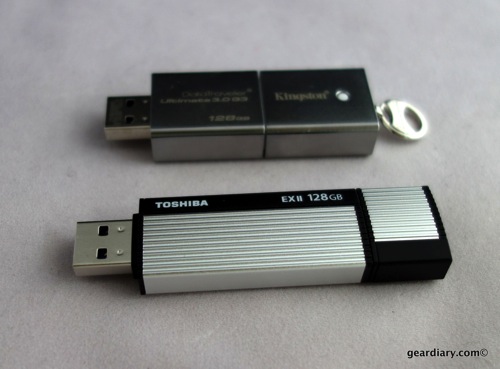 Strikingly, it has the same capacity as this Kingston DataTravelor Ultimate 3.0 G3 but is far smaller and lighter. I do have to admit that I prefer the heft of the larger drive. Still, there is something very nice about a drive that is as thin and light as the Toshiba drive while also offering a large amount of storage and fast USB 3.0 speeds.

All of which leads me to my biggest issue with the Toshiba TransMemory Pro 128GB USB 3.0 Flash Drive — compatibility. The drive is advertised as being compatible with both Windows and Mac OS X. The box even says, “Works with PC and Mac.” That’s true. The box also says “Security Software Included.” That’s true as well. The issue is that one or the other statement is true, but both are not true simultaneously.

You see, the security software is PC only; it doesn’t work with a Mac. So I opened the drive expecting to be able to create a 128GB encrypted flash drive I could carry, only to discover that it works fine as a flash drive but doesn’t offer security if you use a Mac. And while I know the product page does include the words, “Built-in security software (for Windows PCs) with password encryption protects data against theft or loss,” the actual packaging does not make that clear. We’ll have a followup post by Carly who is going to test and writeup the security aspect of this drive.

The Toshiba TransMemory Pro 128GB USB 3.0 Flash Drive is backed by a 5-year standard limited warranty, and it is quite fast. At $200 it is rather pricey, but fast large capacity drives are always premium products. I expect the price to come down rather quickly; I just wish there was Mac security software included as well.

What I Like: Huge capacity so you can take tons of files with you; Fast USB 3.0 speeds; Solid aluminum design; Thin and light; Encryption software for Windows

What Needs Improvement: Encryption software is for Windows only