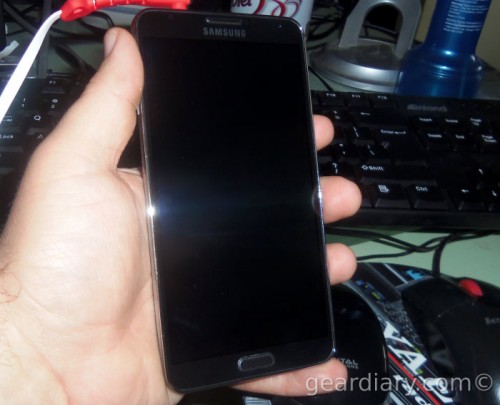 Michael reviewed the Verizon edition of the Galaxy Note 3, and he liked it.  I bought one over the weekend instead of the HTC One (M8) that Carly bought, because of reviews like Michael’s and my experiences with using the Galaxy Note 2 for a month.  I feel that this STILL is one of the best phones on Verizon.

I had the opportunity to play with the Note 2 for a time, and I was really enamored with the return of the stylus on the Note and the Note 2. When my time was up I was sad to give up the device, but I knew that when the Note 3 shipped it would be on my short list as my next phone. So when I had the opportunity, not much else had changed in the Android market with the exception of the HTC One (M8) release, so I went big and then went home. 😉

The battery is probably the single best thing about the Note 3.  It has MUCH more life than any battery I ever had on my Galaxy Nexus.  So much so that once it’s charged, I can leave it off the charger all day.  I topped it off earlier this morning, and I have been using it to listen to podcasts, take pictures, check e-mail, use Voxer, and more over the last 4 hours — and it’s only down to 73 percent.  My Galaxy Nexus would have already been flat by now.

The stylus is also great, and the added Air Command functions have made it even better. Being able to bring up the calculator overlay on top of any app is a handy feature to have.

Last in my list of first impressions is the interface.  TouchWiz is still not my favorite interface, but it’s much better than I remembered it. The single most annoying thing is how the button reacted out of the box. I kept bringing up My Magazine, which is Samsung’s version of Flipboard. It actually uses your Flipboard account, and it kept constantly popping up.  Luckily I was able to figure out how to turn it off so that saved the phone from going back.  I wish that Samsung would learn, like Motorola and HTC, that less is more.

Since I am also a Linux guy, I did plug the phone into a Linux system and it did charge, but it has the same issue that all newer Android phones have in that it supports only MTP or PTP protocols. MTP is for Music (Music Transfer Protocol) and PTP is for Pictures (Picture Transfer Protocol).  On Linux, this is more difficult to deal with, but not insurmountable. I, however, am lazy and it’s not as big of deal to me; since it has WiFi, I can always use apps like Airdroid or others to move files off and on the phone over the network. My pictures are backed up via Goole+ anyway, and for music I stream Pandora or some other music service.  So while I wish it acted like a thumb drive when I plugged the Galaxy Note 3 into my computer, I am ok with the way it works now. Incidentally, I was using Manjaro Linux to test with. I’ll dig deeper and see if I can get it working better when I have more time.

When I was at Verizon, I also looked at the HTC One (M8), and I ALMOST went for it. Why? The Sense UI on the M8 is VERY close to stock in my opinion.  While I appreciated that, the stylus is really what sold me on the Note 3. One thing I love to do is doodle and write handwritten notes.

Stay tuned; I’ll soon share tips and tricks on how to get the most out of the Galaxy Note 3.