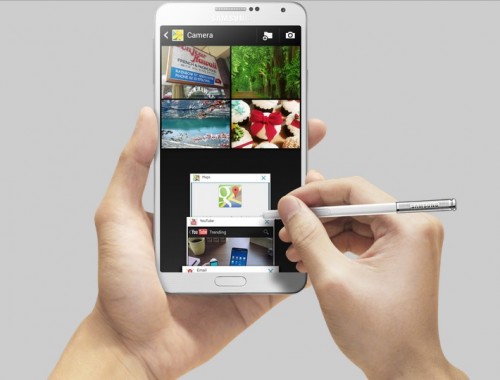 The Galaxy Note 3 has a thin, light build that weighs 5.9 ounces, measures 6 inches long by 3.1 inches wide and only 0.33 inch thick. This smartphone feels great in your hands, and the back cover’s faux leather-plastic provides a nice grip with no fingerprints. The cover sticks to papers in your pocket, so users might want a dedicated spot for this powerful mobile smartphone. 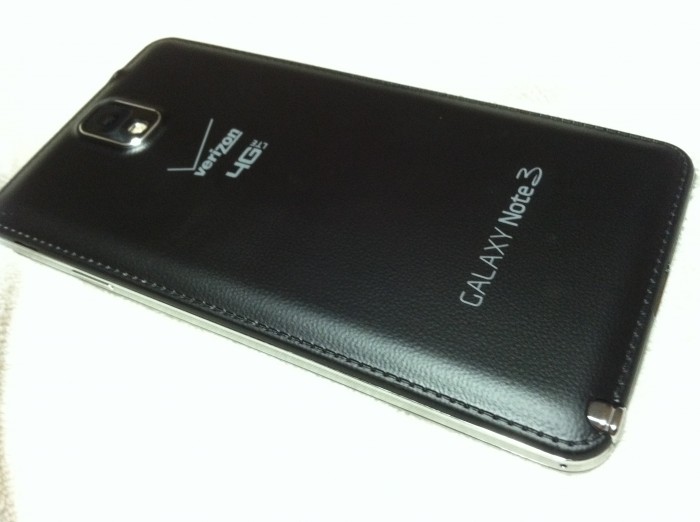 The Galaxy Note 3 has a removable Li-lon 3200 mAh battery to easily get you through the day and more. Typical use for me (medium to heavy) lasted two to three days before I had to charge up. Users can easily change the battery, SIM card, and microSD memory card by releasing the back cover lock by pressing in the groove. The SD card slot sits directly on top of the micro-SIM bay.

The main back features are the 13-megapixel camera lens and LED flash while the S pen, speaker, and charging/USB port are at the bottom. The USB 3.0 gives faster charge times and data transfer rates that are up to 10 times quicker than the older USB 2.0…as long as you have a compatible computer. Camera editing features are available on the phone. 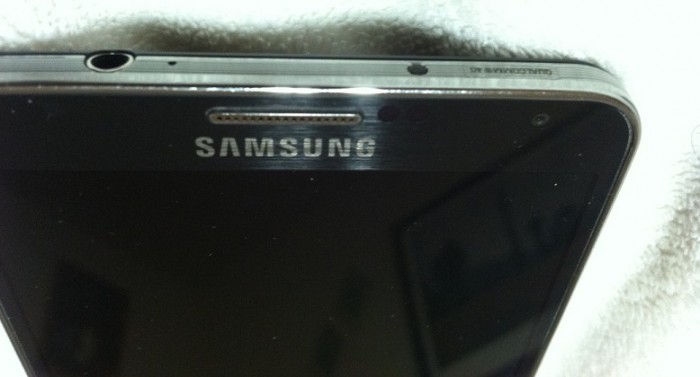 On the top is the headset jack, speaker/IR blaster, and front facing 2-megapixel camera ideal for video chat and self-portrait pictures. Users adjust the audio volume at the top left side and the right side has the power/lock button.

The bottom has the visible home button… 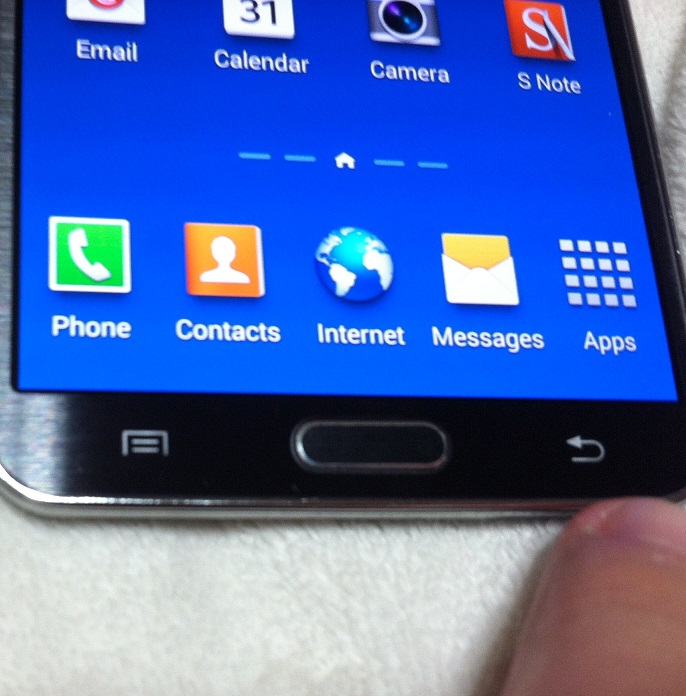 while the middle while the menu (far left) and back (far right) buttons illuminate when touching the these or navigating through device. 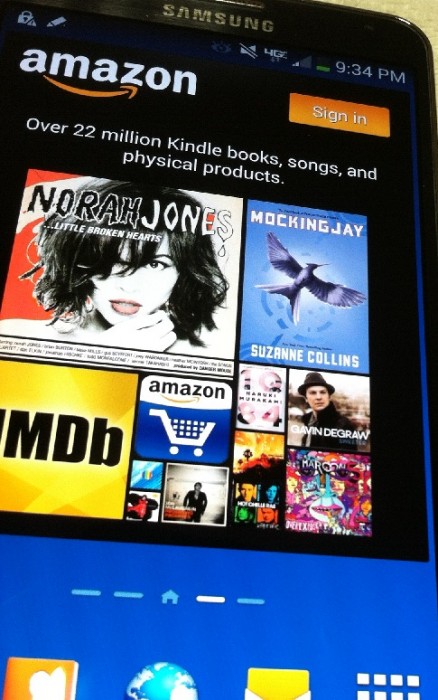 Now for the main multi-touch display. First unlock by pressing the power/lock button then swipe your finger across the screen in any direction. Users can swipe across two panels to the left and right of the home screen for additional menus and features. 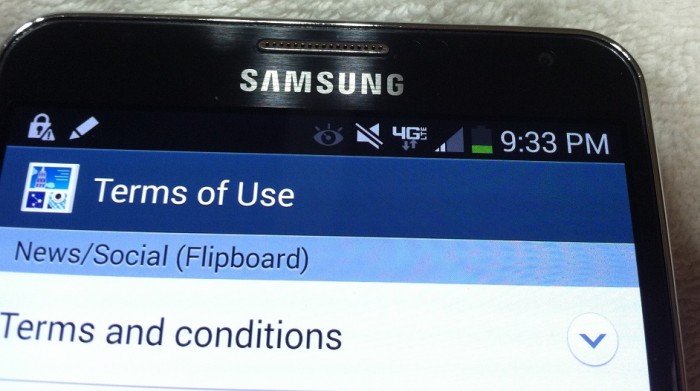 The status/feature buttons at the top include information on network connectivity, battery life, etc. 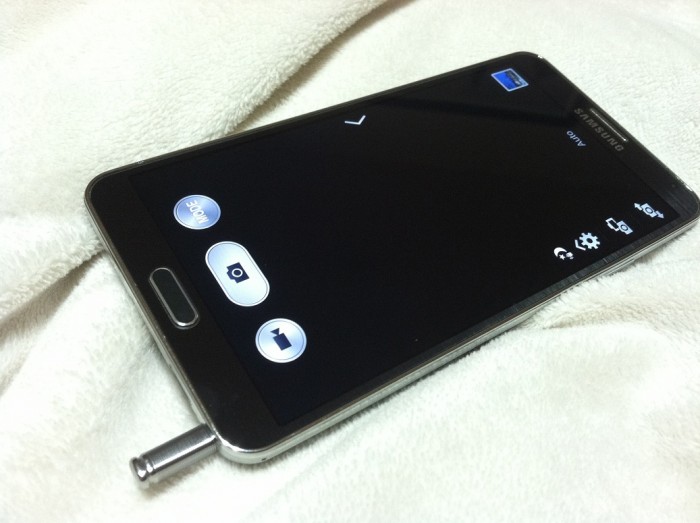 The S pens are not required for use (you can always touch by hand…well, finger), but helps when doing drawings, handwriting, and capturing screenshots. This convenient tool features 256 pressure points of sensitivity so you can write and sketch as if you were using pen and paper. 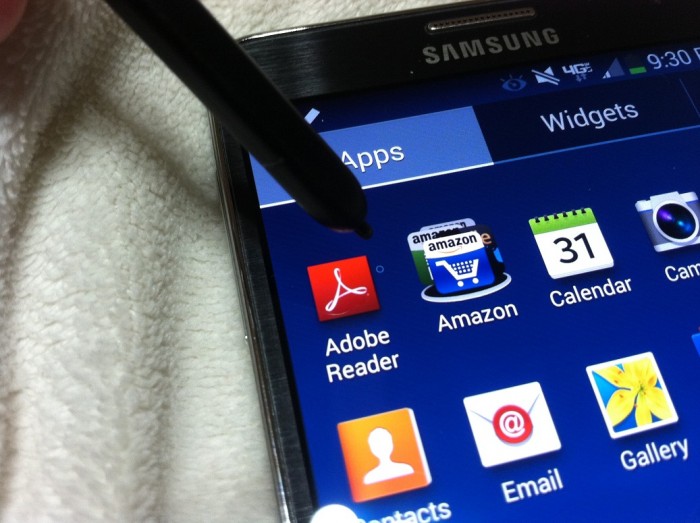 These features are all conveniently organized under the AIR command fly out menu. Just remove the S pen, hold it near the screen and press the button or simply remove the S pen from the phone. A menu appears with the following functions (listed left to right): action memo, scrap booker, screen write, S finder (search device content) and pen window.

Action memo lets users email handwritten notes/data, save it to contacts, use it in a text, convert into list, transfer to apps (e.g. Evernote), or view on a map. The handwritten to text recognition/transfer (under the Swype system) usually works well though the occasional rewrites were inevitable. Keep track of those S pens because a replacement pen costs between $30 and $50. Thankfully you can easily replace the tips using tweezers. 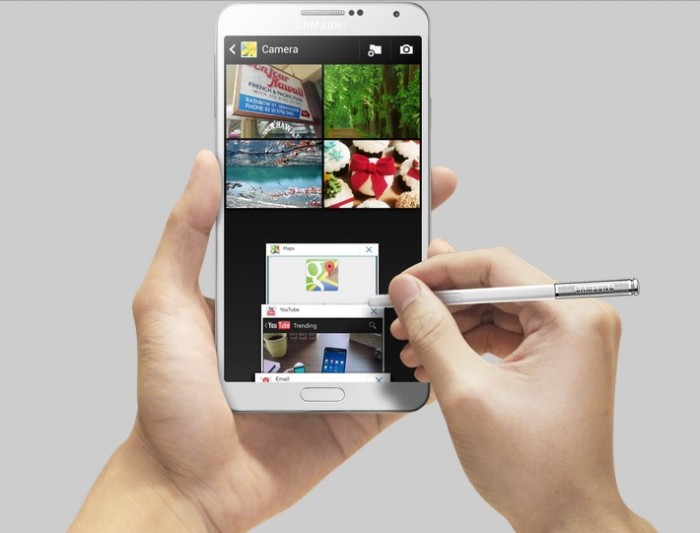 The multiwindow features lets users use multiple apps on the current screen simultaneously. Just press and hold the back key (bottom front), press the multi window tab on the side and select. Hide again by pressing and holding the back button.

The global travel program features voice service in more than 220 countries(150 with 3G speed). This phone can determine location which is very helpful for navigation, shopping and weather. For safety the default settings acquire the current location when 911 is dialed.

The Note 3 contains accelerometer, gyro, proximity, compass, barometer, temperature, humidity, and gesture sensors. These sensors let user perform unique functions like the air gesture where you wave with hand over the Note 3 for quick peeks at essential information without activating the smartphone. Note 3 owners also get the S beam that allows them to share large video, photos, docs, music and other content by touching two compatible devices back-to-back.

The ‘do not disturb’ mode, called blocking mode (in settings > device), can be customized for specific times and contacts, so it’s easy to tailor-make the Note 3’s status at night.

Here are the specifications:

Is the third time charm in the phablet Note series? Definitely. Users get considerable improvements. Samsung users will notice even though the Note 3 has a larger display/battery it is slightly narrower and thinner than the Note II.

Still not sure about the Galaxy Note 3? Try the Android app called “Galaxy Note 3 Experience”. Samsung recommends that the device include at least a 1.4GHz processor, Android 4.1 Jelly Bean and 1080p HD resolution. The app includes interactive tours of the Note 3 functions.

Galaxy Note 3 users can also take advantage of some great accessories like the Samsung Galaxy Gear Smartwatch (not reviewed here) with 1.63-inch touchscreen and 1.9 megapixel camera, which launched this September at approximately $329. This device’s functions work with the Note 3 via Bluetooth (a.k.a. smart relay). This smartwatch also includes app, pedometer, voice recorder, and special scheduler that links to the S Planner. Users can also offload smartphone functions to your wrist. The Samsung Galaxy Gear Smartwatch also works with the Galaxy S4, Galaxy S3, and Galaxy Note 2 smartphones.

The Galaxy Note 3 is available in black, white and pink from Verizon AT&T, Sprint, T-Mobile, U.S. Cellular and others. The price is fairly high for this high-quality smartphone.

MSRP: starts at $299.99 with a two-year contract; plans vary according the activations, contracts, etc.