I’ve heard of churches using projectors to beam words to songs, images, and page numbers onto a screen during services, and we’ve been considering it for our sanctuary; we wanted to test it out during the summer. Fortunately, I had a review sample of the Epson PowerLite Home Cinema 2030 2D/3D 1080p 3LCD Projector in hand. 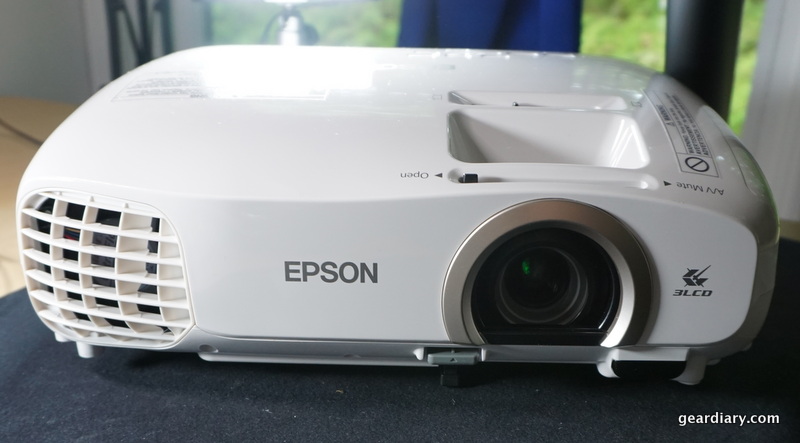 It turns out that the projector is phenomenal for home use, and it held its own during services as well.

The PowerLite projector is small, easy to use, and — for what it is and for what items in its class usually cost — it is surprisingly affordable. Under $850, it gives you a powerful projector that works with both 2D and 3D. 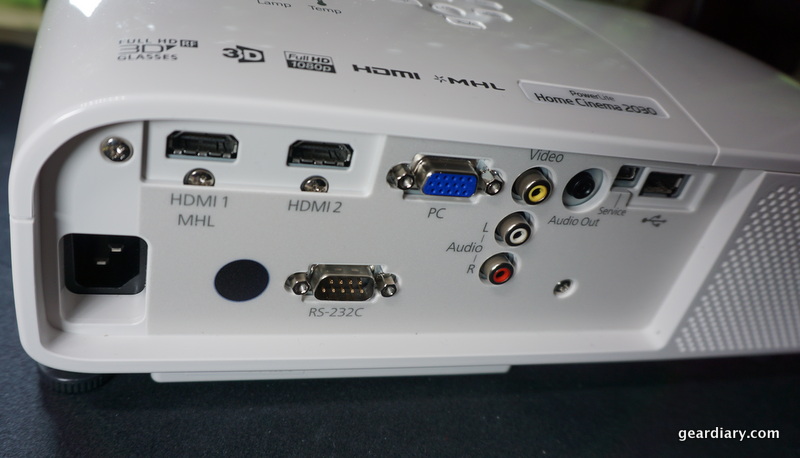 Better yet, it offers 1080P performance and tons of connectivity options. There are two HDMI ports, MHL connectivity, a VGA PC connectional composite connections, Audio Out and a USB port for powering devices; I’m impressed with it. 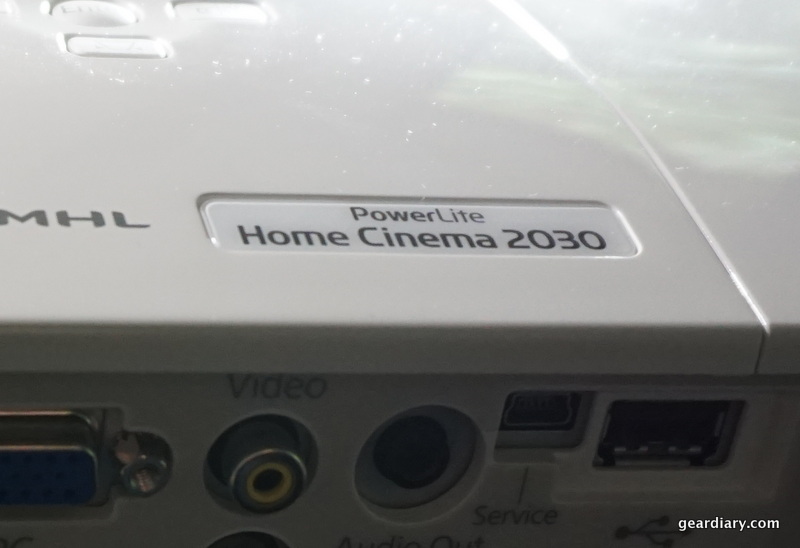 Epson describes the projector this way:

Discover bright cinematic adventures at home with the Home Cinema 2030. Enjoy full HD 1080P performance practically anywhere, in 2D or 3D. Images are always rich and brilliant with 2000 lumens of color brightness and 2000 lumens of white brightness. Cheer on your favorite team with images up to 300 inches on any wall or screen. Use the built-in sound or your own speakers. Setup is easy. The Home Cinema 2030 comes with two HDMI ports. And, MHL connectivity turns your projector into a smart display, providing instant access to movies, videos and games from MHL enabled smartphones and tablets.

The aspects of this projector that are, to my mind, its standout features are: its affordability, its ability to project both 2D and 3D images, and its easy set up. To test out the setup simplicity I decided to use the projector without reading any of the instructions. I pulled it out of the box, plugged it in, and started manipulating it so that I could begin projecting onto a blank wall at home.

Since Epson wants me to check out the 3D aspect of the projector as well, they also were kind enough to send a pair of their 3D glasses. This is, of course, an additional expense over and above the $849 that the projector costs. 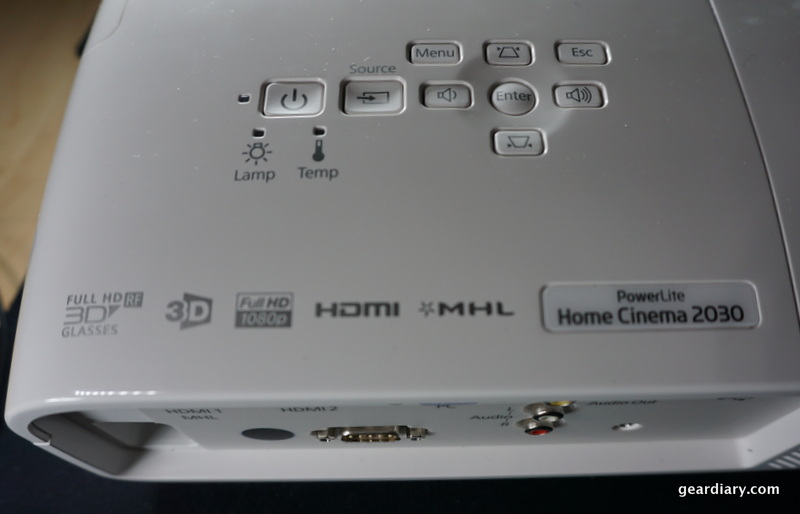 So how was the process of setting up the projector and using it? Surprisingly simple! I was able to connect the projector to my Apple TV via an HDMI to HDMI cable (not included) and, within a few minutes, I was watching a movie.

The image was quite clear, and the sound coming from the projector was surprisingly good. No, I would not use the built-in speaker if I was setting up the projector for use in a single location on an ongoing basis. For that purpose I would definitely want a better sound system, so that the audio would match the quality of the video projected by the Epson PowerLite Home Cinema 2030. Thankfully, connecting an external audio system is simple, too! That noted, for on-the-go use the speaker in the projector itself is actually more than passable, and it certainly allowed me to enjoy that first movie.

I don’t have competitors projectors on hand to compare to, but I will say that even in bright light I was able to get a pretty good image on my wall at home.

Let’s run down the key features of this projector.

Taking the Epson PowerLite to Shul:

I decided I wanted to try out the projector at the synagogue for worship. Rather than handing out song sheets for some new melodies, we were going to be teaching the congregation during the summer, we set up the projector in the sanctuary. We have an old screen that we use when showing movies to our students, so I had that set up in the corner of the worship space. I made sure that the image was projected precisely on the screen and connected an Apple TV. I used the Keynote controls to make sure that the image was perfectly squared. I downloaded the words to each of the songs we were going to be doing into a Keynote presentation on my iPad.

When people walked into the sanctuary we were already projecting a picture of Jerusalem on the screen; they wondered if we were going to be looking at a slideshow of my recent trip to Israel. I explained that we were not going to be doing that, but we would be trying an experiment. As the Cantor began singing the first song, I flipped the screen of my iPad and moved to the next slide in the Keynote presentation. There, projected on the screen with the words to the song. Now, instead of people looking down at a piece of paper, they were all looking forward together. And despite the fact that we were worshiping with light still streaming into the windows of the worship space, everyone was able to see the image on the screen perfectly well. I was impressed! 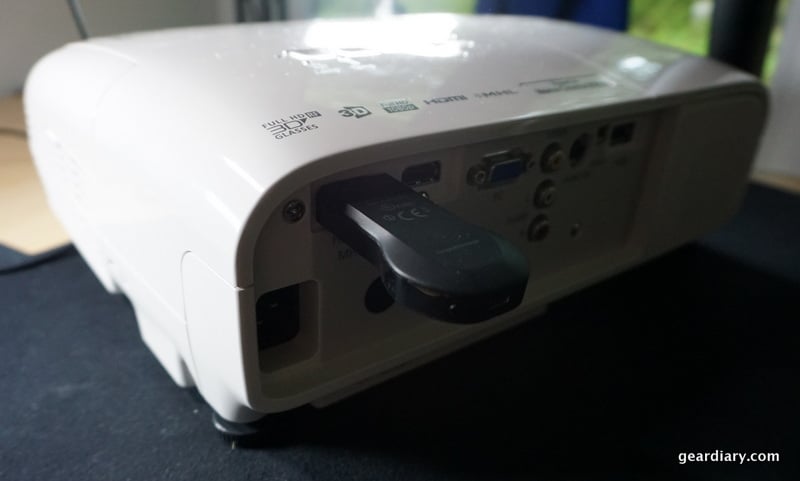 As I began writing this review, I decided that I also wanted to check out how the projector worked when I connected it to my Chromecast and projected something onto the living room wall. 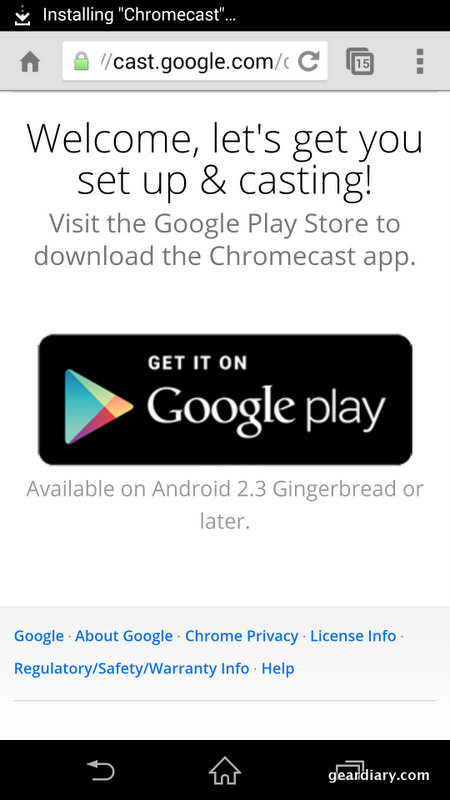 I set the projector up in my living room, connected the Chromecast, got everything set up on my smartphone, and turned on the projector. 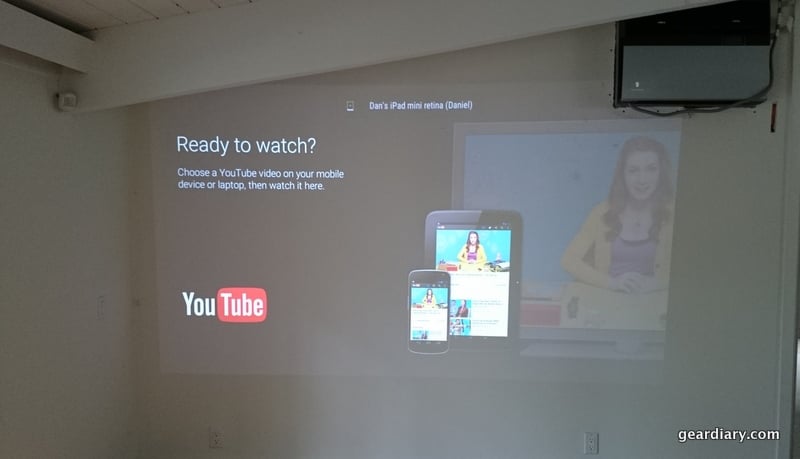 Within a few minutes, the projector indicated that it was working in tandem with the Chromecast, and it was simply waiting for me to throw something from a tablet or phone to the Chromecast in order to begin projecting. 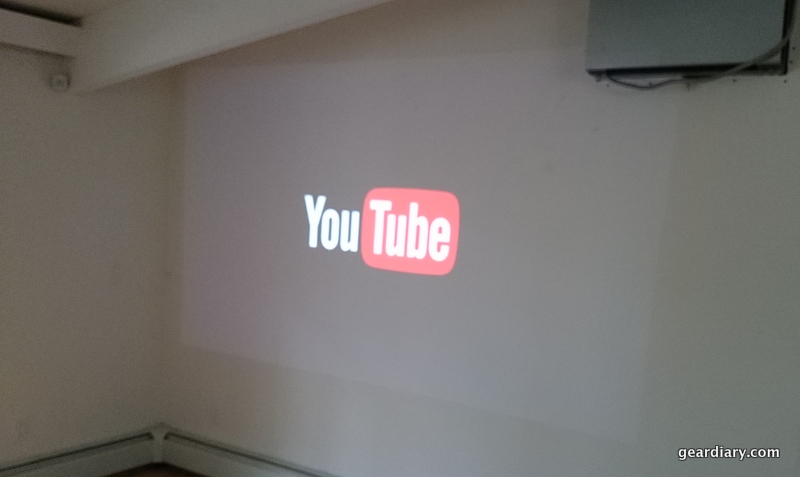 A few tests on the screen of my iPad, and I was able to watch the following on the wall in my living room.

I then got things set up so I could use the Chromecast with Chrome on my MacBook Pro. 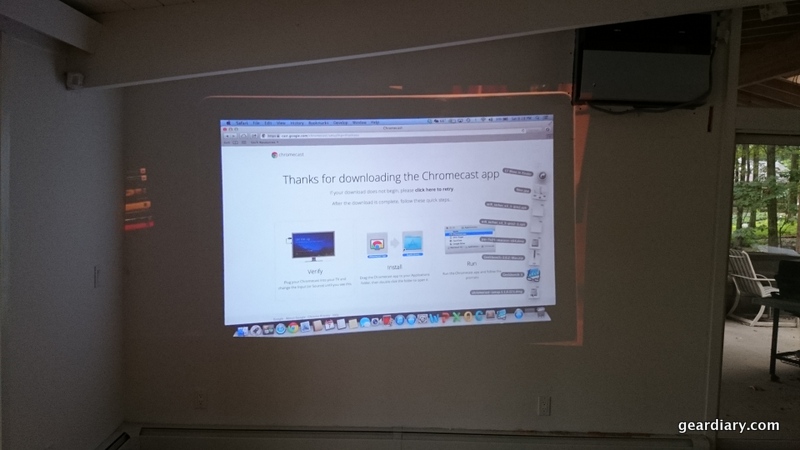 It worked just as well as sending video from my Xperia Z2 and iPad. 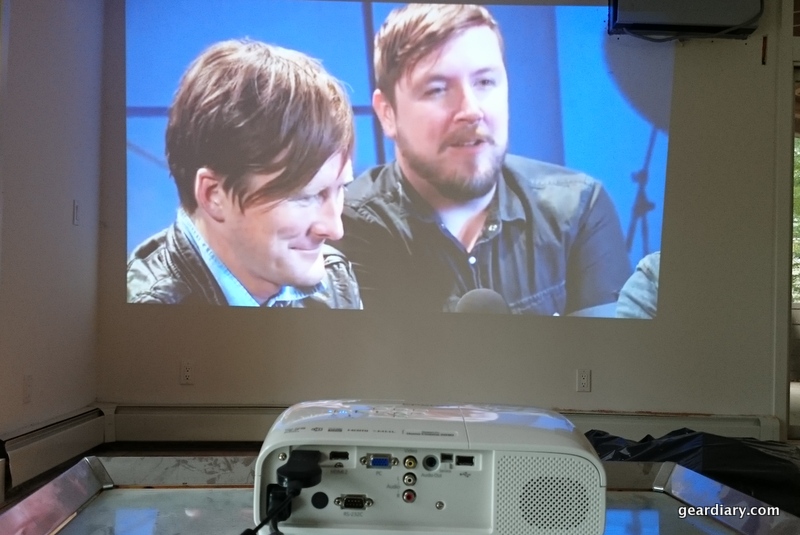 I’m able to do all this with the Epson PowerLite Home Cinema 2030 [Affiliate Link] for just $849 here on Amazon.

If I was going to register any complaints about the PowerLite Projector, they would be as follows … 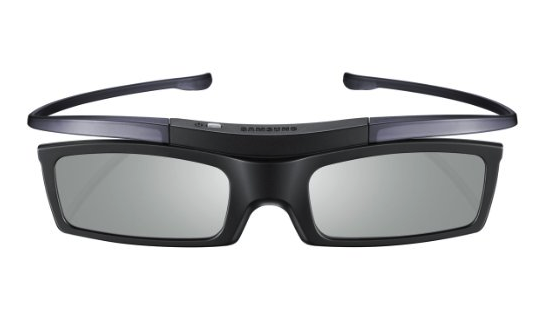 The 2030 projector is designed to be both a 2D and a 3D projector. To get the 3D abilities however, requires the purchase of Samsung 3D Active Glasses. Sure they are under $20, but that still means the projector’s price is a bit deceiving, and it will be anywhere from $20 – $100 more depending on how many people you want to be able to watch in 3D. Then there is the wireless connectivity… Or, more accurately, the lack of wireless connectivity. Sure you can add wirelessHD, but that will cost you an extra $100. And while I guess it makes sense to help keep the price down for people who don’t want this functionality, were I buying a projector I would want something loaded rather than a device I would need to buy and then purchase additional add-ons. 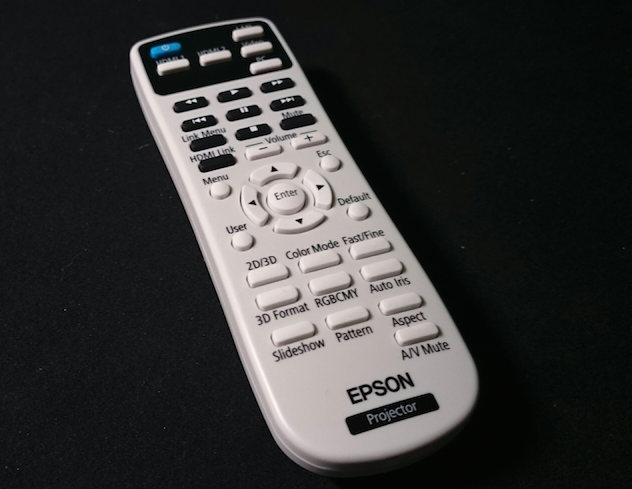 Thankfully a fully functional remote IS included with the projector. Sadly it has the look and feel of a 1980s remote; it gets the job done but it is big, clunky, and unrefined.

Those, however, are minor complaints about an otherwise impressive device.

In all, this is an incredibly impressive projector, and we only touched on some of the features. In part two of this review, will look at the wireless aspects of it as well as its ability to be used as a 3D projector when paired with Epson’s 3D glasses. In the meantime, you can learn more about the projector here.

What I Like: Easy to set up and use; Great, bright, sharp picture; 2D and 3D; Onboard speaker surprisingly decent; Tons of connectivity options; Good price for the quality and features

What Needs Improvement: 3D glasses and wireless connectivity are additional expenses; Included remote is functional but not refined