Cities: Skylines is THE new next-gen city building and management simulation game. Developed by Colossal Order, a small Finnish team with a passion for high quality games, Cities: Skylines towers above the competition when it comes to deep gameplay and customization. Cities: Skylines is available for $29.99 TODAY on Steam, and is compatible with PC, Mac, and Linux.

The game’s publisher, Paradox Interactive was kind enough to provide Gear Diary with a pre-release Steam Key so that we could download and experience the game ourselves for a week prior to the game’s launch. And although real life doesn’t allow me to spend as much time in the game world as I’d like, I was instantly hooked on this new city builder. The depth to which you can build and manage your city is insane, and with the help of the in-game asset editor combined with the Steam Workshop, users can build their own custom buildings, highway exchanges, etc. and share them among other users.  Please keep in mind that I was forced to use a Macbook Pro for my review, screenshots, video, etc. so I’m sure a PC that’s built for gaming would look and perform much better than my own. 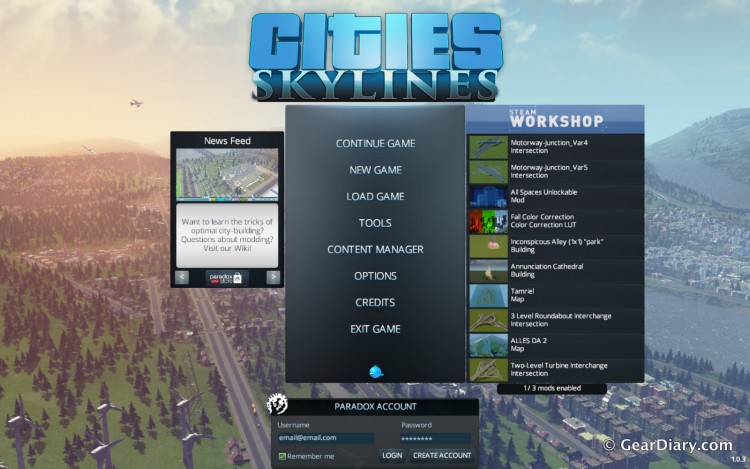 Colossal Order is a 9-person team who loves city building games. They were heartily disappointed when the 2013 release of SimCity fizzled out and they said collectively, “Let’s make a proper city builder ourselves.” Cities: Skylines is a city builder and management game to its very core. Unlike the 2013 release of SimCity, which was beautiful and had a countless number of people working on it, the actual building and management of the city left something to be desired because it appeared that cosmetics were the primary concern of EA and, the now defunct, Maxis. Colossal Order put most of their energy into the building, simulation, and management of this game, and then added a nice layer of cosmetics on top of that. 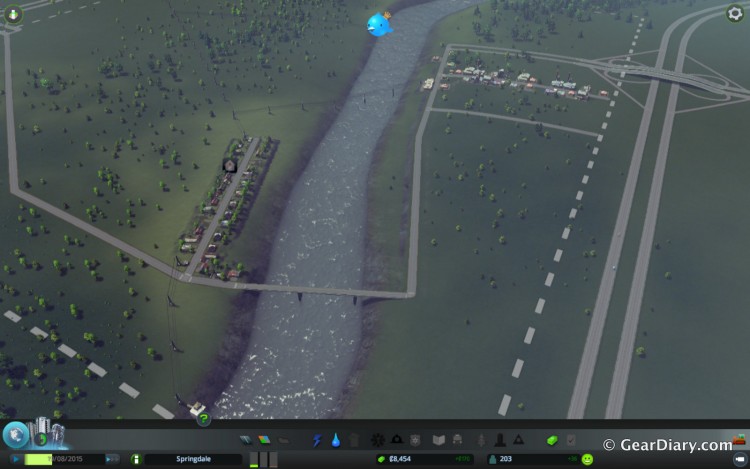 That’s not to say that Cities: Skylines isn’t beautiful, because it absolutely is, as you’ll see in my screenshots and review video, however, it’s not as stylized as the 2013 SimCity is. Cities: Skylines looks more like a diorama then it does a real-life city, and I’m OK with that! I respect Colossal Order’s decision to focus on the gameplay and customization rather than the shallow aesthetic exterior. 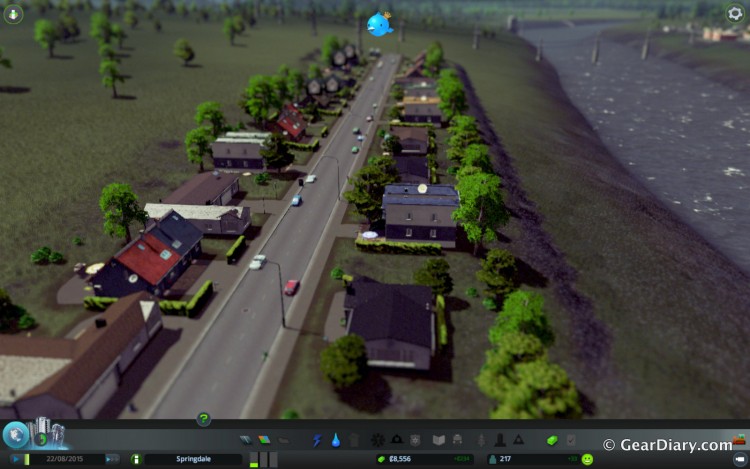 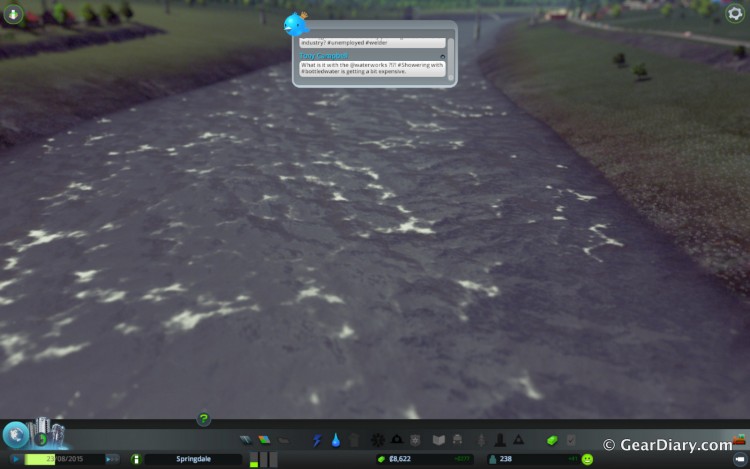 Detail of the babbling river.

I really enjoyed forcing myself to remember how a city SHOULD be designed every step of the way, whether it was getting power or water to my citizens or deciding where to place my wind turbines to maximize my citizens’ land value. But what made me feel the most like a Mayor was that I could enforce certain policies on my city or just on certain districts, whether it was energy usage restrictions, water usage restrictions, recycling policies, or even recreational drug use policies! It really felt like I was leading the city rather than just building and managing it. 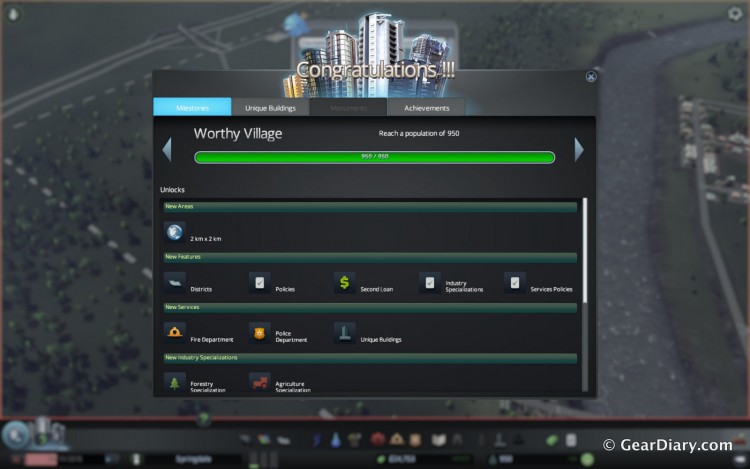 Cities: Skylines has a unique way of letting the Mayor (read: player) know how the public is feeling, and that’s by using a Twitter sort of communication platform called “Chirper.”  Chirps pop up every now and then and give you hints on what the public is thinking, or just makes a funny quip about something you might have just done.  For instance, as soon as I instated an energy conservation policy, a Chirp came through asking whether the energy meters consume energy. 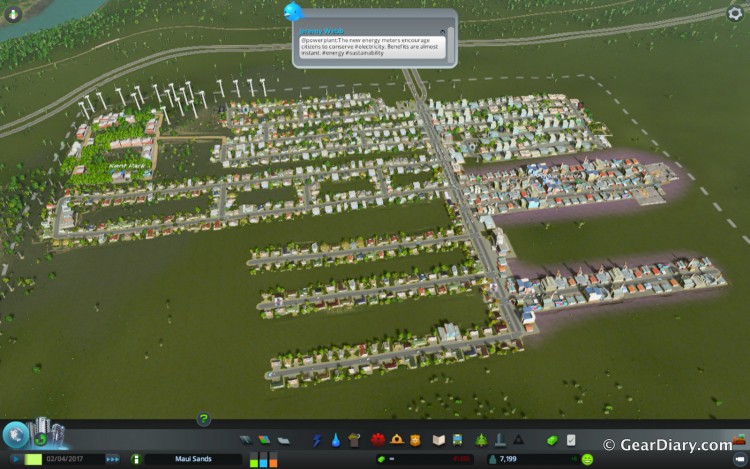 Overview of my second city.

Cities: Skylines is a fantastic city builder and management game, and I can’t wait for everyone to get their hands on it to see how well thought out it really is. On the surface, you just build roads, zone residential, commercial, industrial, etc., make sure your citizens and businesses have power and water, access to education, healthcare, police and firefighters, and let it grow from there…but Colossal Order did an amazing job making the game so much deeper than that. There is excellent public transportation, powerful financial management tools, deep roadway design, special policies, not to mention the power to customize a ton of the game’s content and share that content with other users. 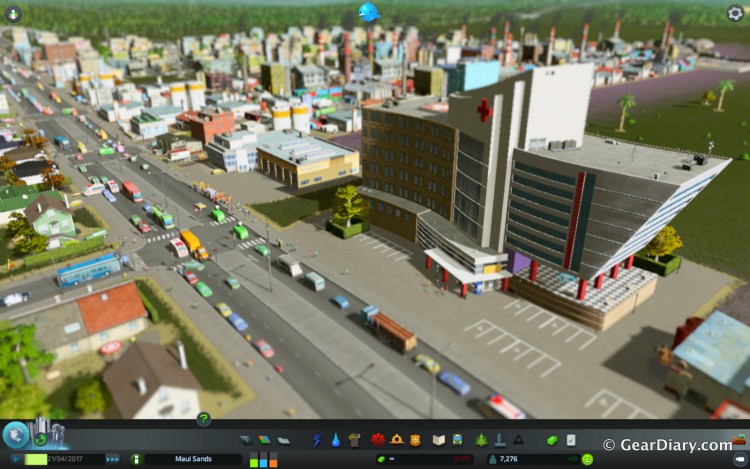 There are some negatives to the game, such as the fact that there is no day/night cycle. This means that the city doesn’t actually act like a “real” city in that there’s no rush hour traffic getting to/from work, but I honestly didn’t notice that very much. The other downside to the game was that it didn’t hold my hand in the beginning like SimCity did. Some would argue that’s a good thing, which it might be, but it took me a little while to figure out what all of the icons meant and how to get started. The graphics aren’t spectacular, but as I mentioned, that’s not the most important aspect to a video game for me. 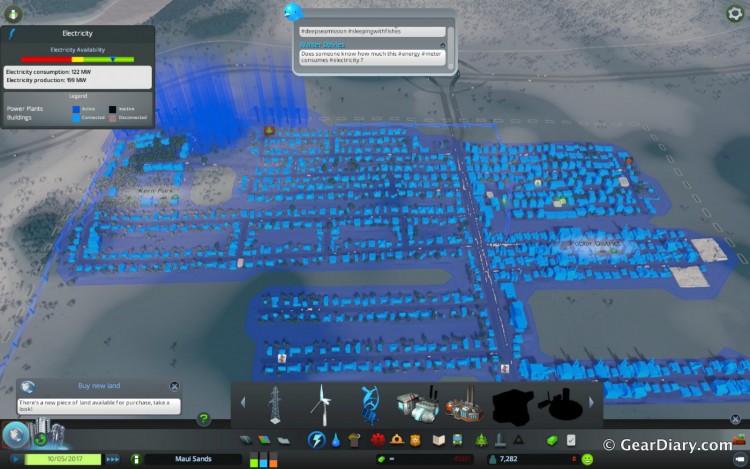 For those visual learners, please check out my video review below where I show you the city I’ve been working on and point out some of the neat features of this game. 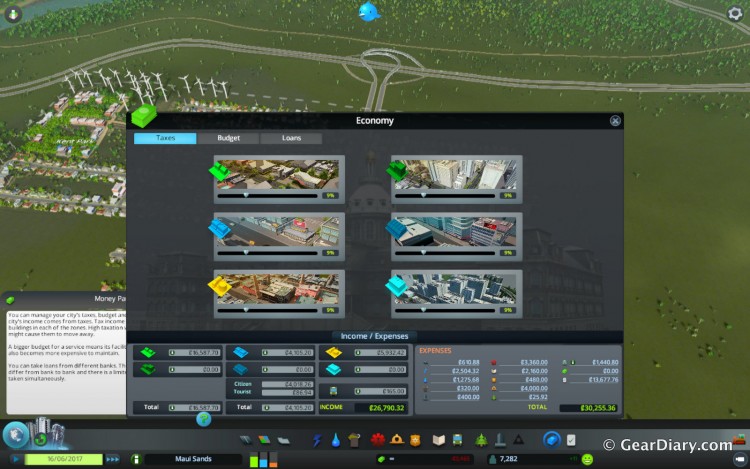 You can purchase Cities: Skylines directly through Steam for PC, OSX, or Linux.

Source: A Cities: Skylines Steam Key was provided to me as a review copy by the publisher.

What Needs Improvement:  A little more hand-holding at the beginning of the game would help; A day/night cycle would be amazing.