When Ford first introduced the Edge crossover nearly a decade ago, it quickly became one of the most popular vehicles in its class. As the field grew more crowded, consumers continued to drive the Edge off dealer lots with greater frequency than the competition. As Ford rolls out the all-new 2015 Edge, that trend should continue. 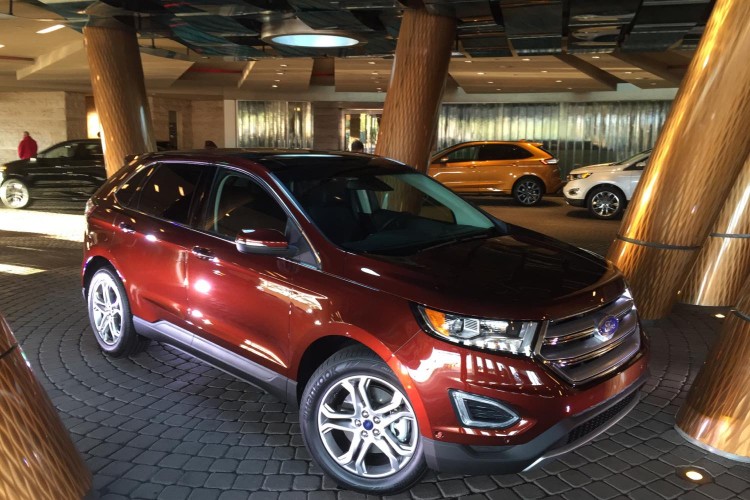 The 2015 Ford Edge is a two-row, five-seat midsize crossover utility vehicle offered in front- and all-wheel drive. It first arrived in 2006 as a 2007 model and has seen one significant refresh in its lifecycle. We recently attended the launch program for the 2015 Ford Edge in Phoenix, Arizona, where we realized that with this all-new model, everything changes. 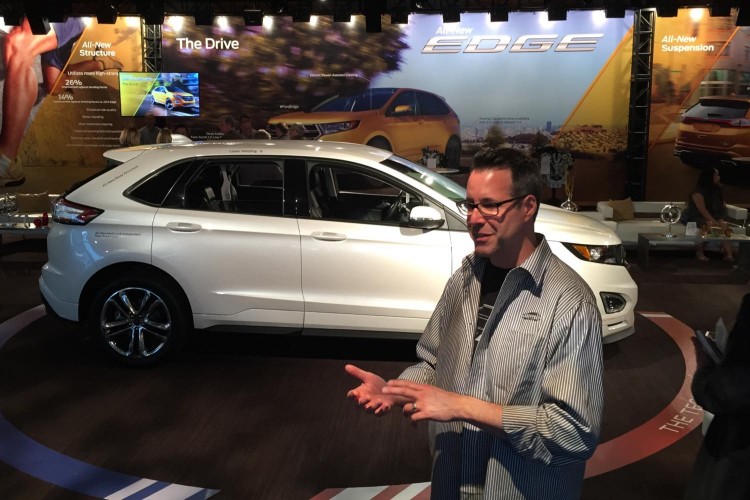 This new Edge rides on an architecture borrowed from the Ford Fusion and receives new suspension systems fore and aft along with better brakes, new electric power assist steering and a host of new technologies (with the exception of the next-generation SYNC infotainment system). 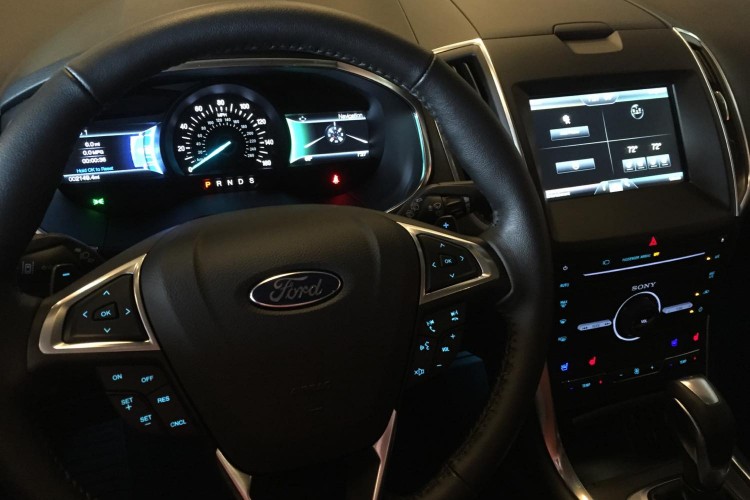 The powertrains begin with an all-new direct-injected twin-scroll turbocharged 2.0-liter I-4 EcoBoost producing 245hp and 275 lb. ft. of torque. This is the base engine across all new Edge models except for the Edge Sport. It will exclusively see the new EcoBoost twin-turbocharged 2.7-liter V-6 engine rated at 315hp and 350 lb. ft. of torque. Ford will continue to offer the normally aspirated 3.5-liter V-6 as an upgrade to the smaller EcoBoost engine in SE, SEL and Titanium models. All models feature dual exhaust and are backed by six-speed automatic transmission with Sport mode and paddle shifters. 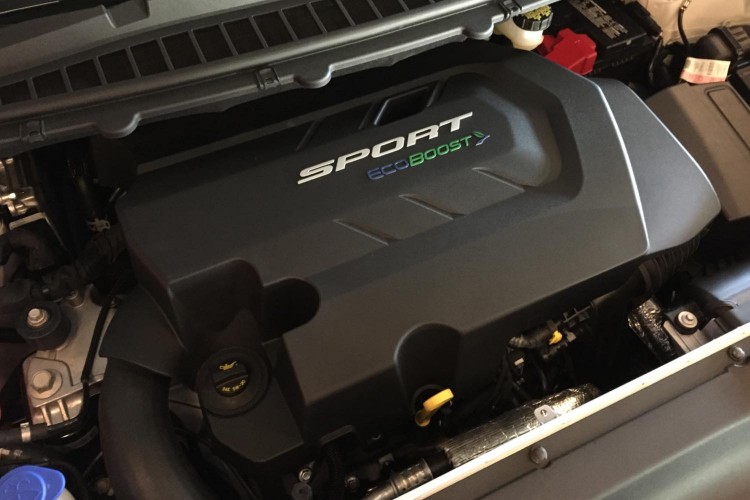 In Arizona we were able to test both Edge Sport and Edge Titanium with each models respective EcoBoost engine. Combined city and rural driving on flat straight roads along with hilly twisties gave us a very good first impression of how well the new Edge handles most road conditions. Car-like comfort without sacrificing a sporty ride will make Edge buyers very happy. 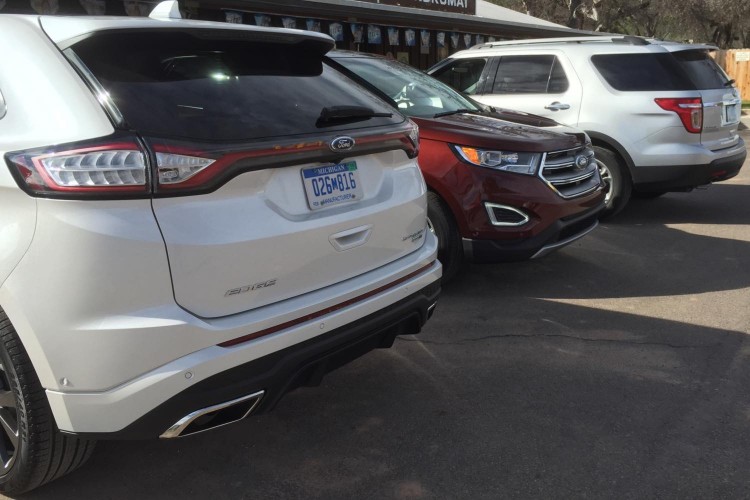 In addition to new engineering, the 2015 Edge receives all-new styling both inside and out. Ford designers did their homework using more luxurious models as the bar to aspire to in delivering this new crossover. Attention to detail is very apparent as this vehicle brings comfort and convenience in an attractive package. 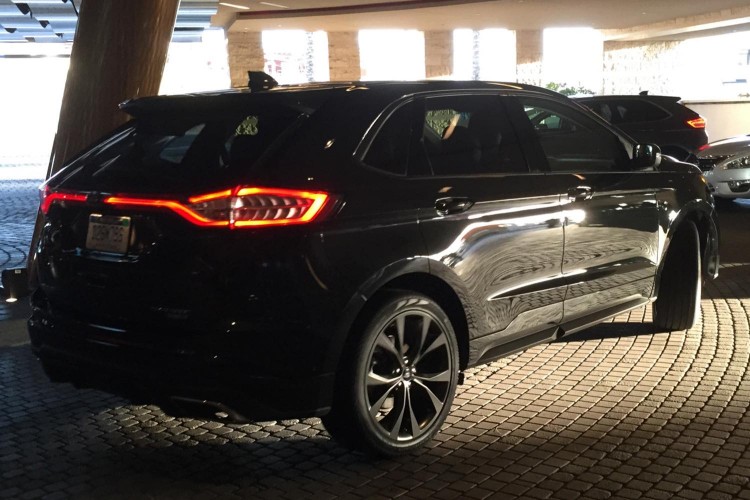 Overall, the new Edge is slightly larger than the outgoing model yet Ford has chosen to stick with only the two rows of seating, thereby offering more cargo space in the rear as well as a more comfortable second row seating for passengers. Up front, Edge offers comfortable yet supportive bucket seating with heating standard and cooling available. 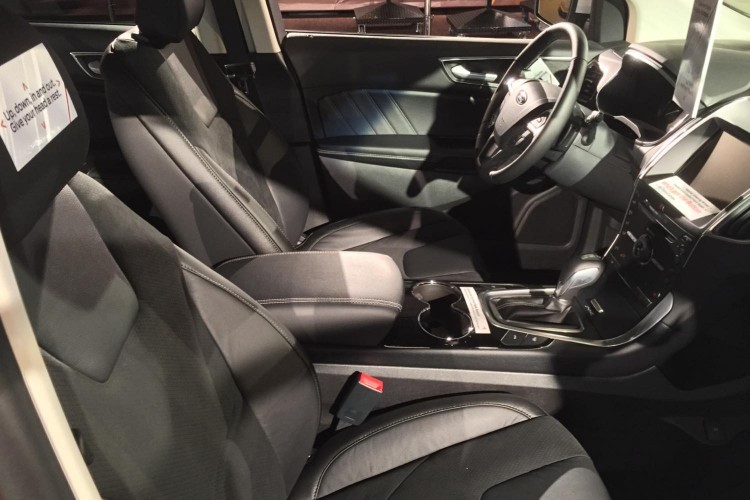 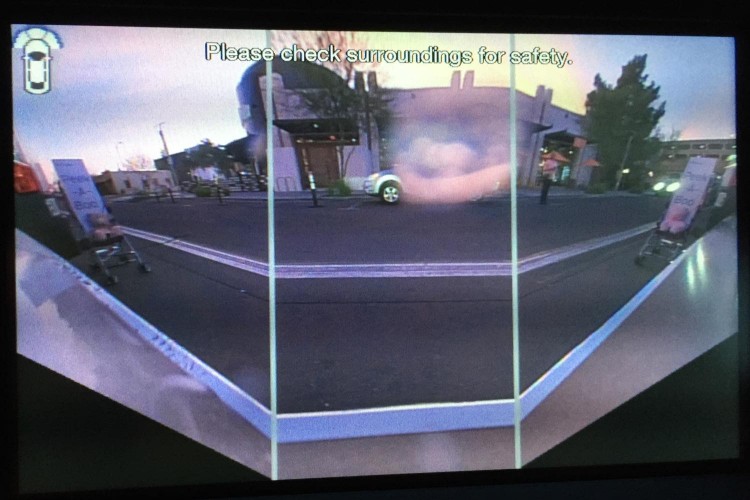 While I do not condone this activity, we tried out the lane keep assist that, working in conjunction with the EPAS, steers the vehicle down the road by itself. As I said, I do not condone nor recommend this activity, but this new technology is a giant step towards autonomous driving in the new Edge especially when combined with adaptive cruise control with brake support along with new active park assist. Speaking of the new enhanced active park assist, the 2015 Edge can help you parallel and perpendicular park and even help you out of a tight parallel parking space. 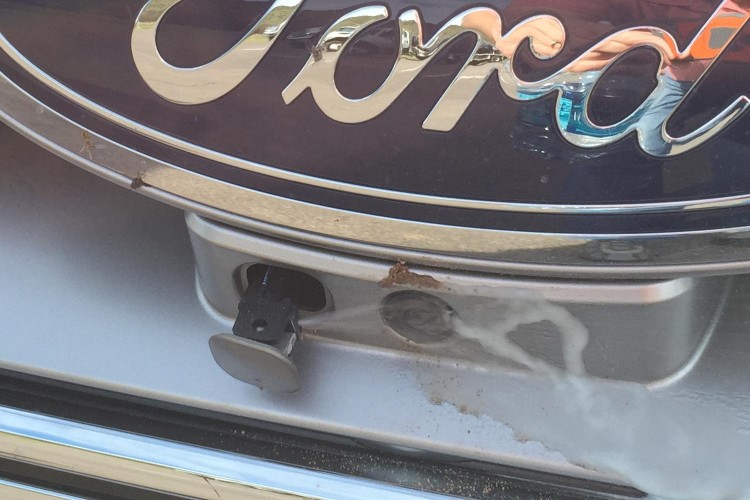 New acoustic windshield glass, available acoustic side glass and a huge amount of attention to sound dampening, this Edge is the quietest yet and will have you thinking you are riding in a sedan. Ford even engineered the new powertrains to be quieter. The 2015 Edge boasts a stronger, more rigid structure, which translates to improved ride control and a more confident driving experience. 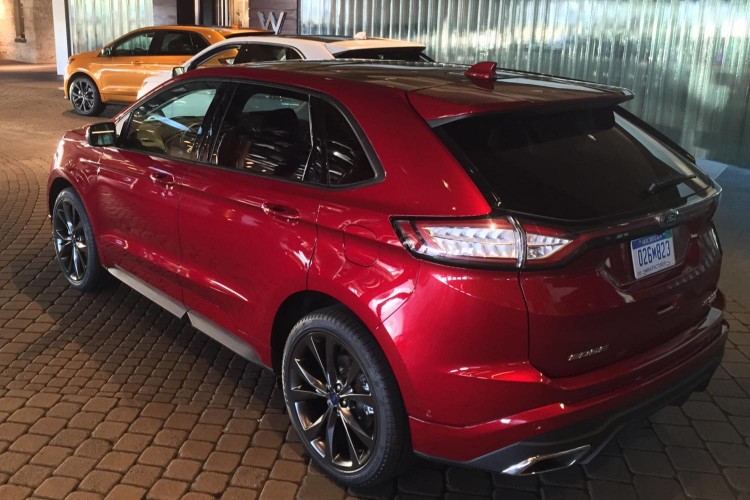 I mentioned earlier about the fact this new Edge launches with the previous generation SYNC/MyFordTouch system that integrates climate, audio, navigation and telecommunications systems in the vehicle, despite the fact that Ford has already announced it will be launching the third generation of SYNC. Ford representatives explained this as since this Edge will launch initially as a 2015 model they will upgrade SYNC when they deliver the 2016 models this fall with SYNC III arriving across the brand’s lineup. They also said the current SYNC systems are not upgradable so folks buying a 2015 Edge are stuck – sorry, Ford hates that word – buyers are treated to old – sorry, Ford hates that word, too – proven technology. (We tested the SYNC system in this Edge and it still “treated” us to some “proven” difficulties.) 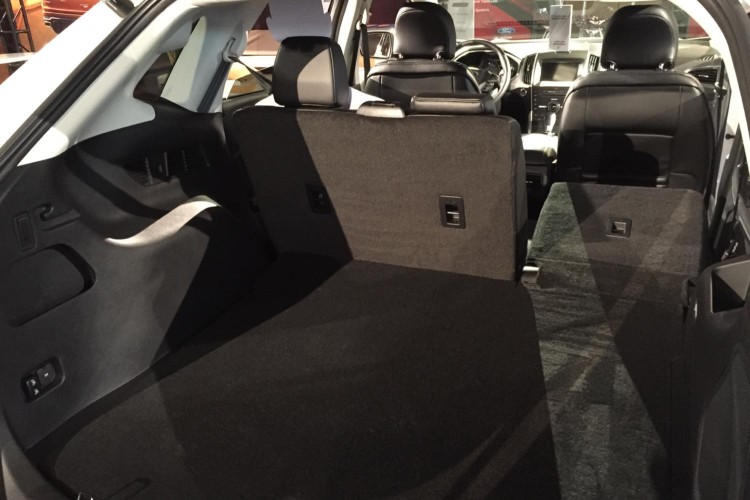 The 2015 Ford Edge will be offered in four trim levels with SE, SEL and Sport carrying over. The Limited package has been replaced with the Titanium label. As I mentioned previously, only the Sport model will come with the 2.7-liter EcoBoost V-6 and that is the only engine that will be offered with it. Those wishing a V-6 in the Titanium model can order the lower-powered naturally aspirated 3.5-liter V-6 although as we found out the new EcoBoost 2.0-liter four does a very nice job powering the crossover. It does have a slight turbo lag when stabbing the accelerator pedal but power comes on very smoothly. The new Sport model trades out the rear twin-tube shocks for monotube units and gets some stiffer springs but no longer offers the 22-inch wheels (21s are the limit) With these changes, some may find the new Sport to their liking and should instead opt for the Titanium. It would not surprise me to see Ford offer the EcoBoost 2.7 in Titanium models in the next year or two. 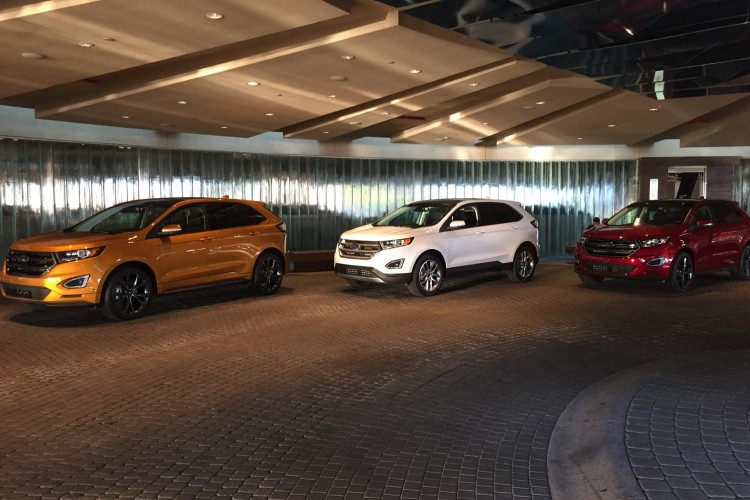 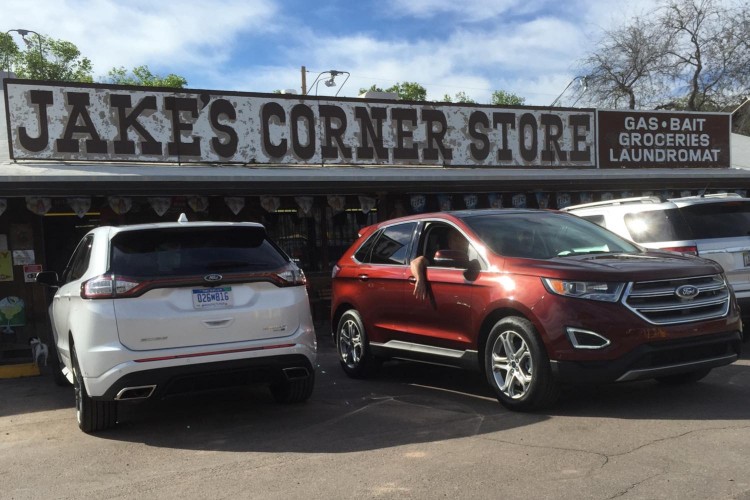 While Ford did not invent this vehicle segment, it did establish the standard for it. Edge has dominated for nearly a decade, and with this all-new 2015 model it shows no sign of slowing down.