If you’ve been around the jailbreak community for a while, chances are you’ve heard of a well-known messaging tweak by the name of Couria. With the slow demise of it’s leading competitor BiteSMS, a lot of people were not sure what to expect out of messaging tweaks, until now. 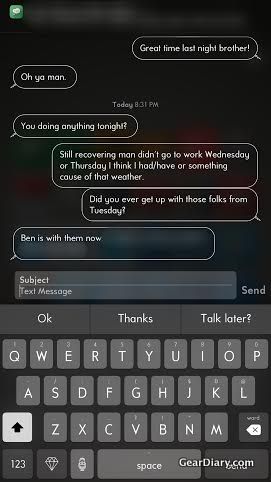 Developer QusicS has just added a beta to his famous tweak. The tweak is VERY beta, but it is available for the public to try out and use, so please be mindful of this before hitting the comment section saying the tweak is incompatible with another one of your favorite tweaks.

the first beta version of #Couria is now on my repo. in the preference I left a note that may answer some of your questions.

Couria basically makes the most of the stock Quick Reply feature by allowing you to view more of the conversation in full screen. When you swipe down on your banner to use quick reply, it will extend further so you can view the complete text thread without having to open your messages app. This ishandy if you are in the midst of a game, or rather not open another app.

Outside of that great feature, you have the ability to compose a text from anywhere in iOS simply by Activator gesture.

Known Bugs:
1. According to some folks on Reddit- It may make your springboard icons go back to the stock layout, especially if using Apex2. [QuickFix is Uninstalling Couria]
2. People on 8.2 may experience a Safe Mode once or twice.