Last year Mark of the Unicorn announced Digital Performer 8 at NAMM in January but didn’t ship until late September. This year they have turned around the new version much more quickly-Digital Performer 9 is now available with loads of new and updated features to make this an essential upgrade for all owners! 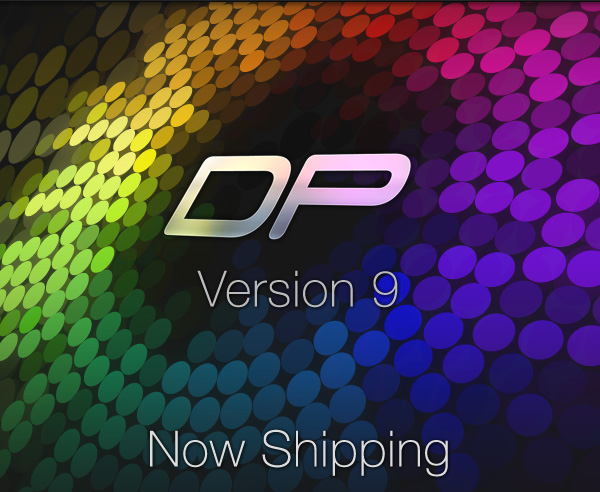 As I mentioned, Digital Performer was one of the very first MIDI sequences, appearing on the Mac back in 1985. I have been using it since 1986 and cannot imagine working without it. Last year’s version 8 upgrade was about jumping to 64-bit support and expanding to include Windows 7 – and dealing with the subsequent bugs! Now for version 9 there are some major enhancements and improvements in usability and workstreams that will help musicians put together songs and tracks more quickly than ever before.

Here is some of what’s new in Digital Performer 9:

DP9 productivity enhancements
Automation lanes in the Sequence Editor — Display audio and MIDI automation data (volume, pan, plug-in settings, etc.) in separate lanes below each track for easier viewing and editing. Show and hide as many lanes as you wish.

MusicXML export — Export your DP QuickScribe notation scores as a MusicXML file, which can then be imported into popular music notation applications like Finale™ and Sibelius™. QuickScribe’s renowned notation transcription, along with dynamics and many other musical symbols, are preserved during the file transfer.

Create Tracks command — Add many tracks to your project in one step, even different types of tracks (MIDI, audio, aux, master faders, etc.) all at once.

Mute MIDI Notes — Use the Mute Tool to temporarily silence both audio regions and MIDI notes, including multiple selected notes.

Project Notes — Save text notes in your DP project, rather than a separate text document. Log production info, keep a To Do list, build up liner notes.

Head to MOTU’s Digital Performer 9 site for more info or to upgrade/buy now!