Over the past thirty nights I’ve had the pleasure of laying down on the Leesa Mattress and honestly, it’s been a pleasure to have such luxury beneath me. 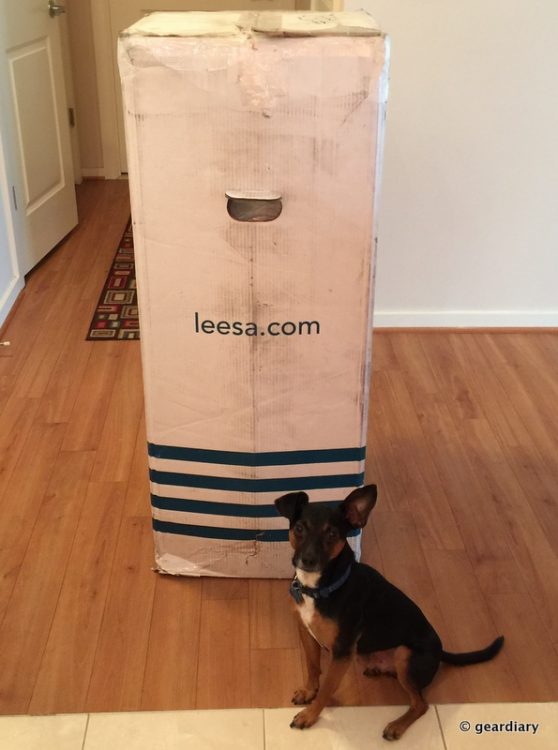 Essentially a “bed-in-a-box”, the Leesa King Mattress I received is the greatest piece of home furniture I have. Prior to the Leesa mattress I had a queen bed that my fiancé and I quickly outgrew. Since the Leesa mattress isn’t customizable when you purchase it online being that it is essentially one of one, Leesa promises a mattress that will not only make sure you never have a hot sleep again, but if you value comfort, the Leesa is certainly in a league all its own.

The Leesa itself is made here in the US, and is mostly made of three pieces. First there are two inches of Avena Foam, which is a polyurethane foam, that is similar to latex, which will be more cool while sleeping. The second being the support layer which  two inches of memory foam. Last there is the support foam layer which is  six inches of base foam for a total of ten inches of thickness. Although Leesa doesn’t advise using a box spring mattress and instead opting for a Bunkie board to support the mattress, I have not noticed any differences at all. Having a King you’ll need two Twin XL box springs to begin with, and my main concern was the space between the two affecting any sinkage with my Leesa, but after using for a month I have not noticed any changes in my mattress. 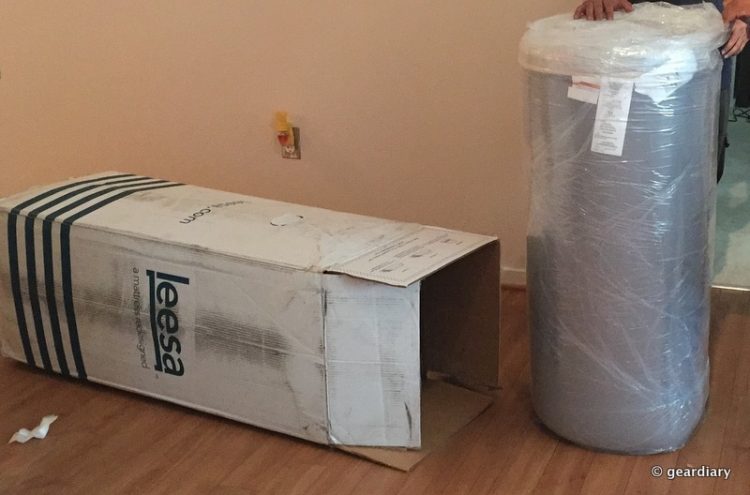 When you pack all of those details into a bed, you have to wonder, how can it all fit into a box? If you’ve not familiar with boxed bed, it’s sort of similar to how the mattress at your local furniture store was delivered to their shop. The Leesa mattress comes compressed and vacuum sealed and weights over seventy pounds when it finally ships. I was actually able to get it to my apartment with ease because of a small detail I didn’t receive in my previous bed in a box, side handles. You learn to appreciate the minor details when you have to go up 10+ flights and dragging a heavy box 80 feet.

Since we had just received new bedroom furniture as well, the company was nice enough to actually go and install the mattress as well as unboxing it for me. After cutting it open with a box cutter, it took the Leesa every bit of two minutes to expand to its fully size. It should be suggested that even though the Leesa has fully expanded, you should give the mattress 4-6 hours to just “rest” and expand even more so it’s best to do this early in the day.

When it’s fully expanded, you should have a perfectly rectangular mattress, with no visible dips at its sides.

I’ve heard reports of a chemical smell after unboxing the Leesa, but I must be one of the lucky few because this was never the case for me.

The mattress itself is just undeniably beautiful. 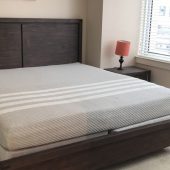 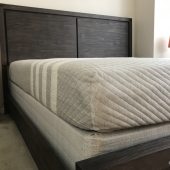 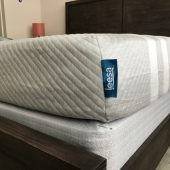 Having suffered through white mattresses all of my life, I was very pleased with the top portion of the mattress cover being grey and it hurt that I had to put a mattress cover on it. The Leesa has four white stripes that are pretty prominent on the mattress and honestly just look really good.  While Leesa states that it is not necessary, I had to consider the fact I have a dog, and well.. accidents and spills happen, so I just wanted to take precautions. It’s also worth noting that while the Leesa’s grey cover is cool to look at, it is pretty thin to the touch, and with a rambunctious puppy in the home, I do not want him to tear at the material. 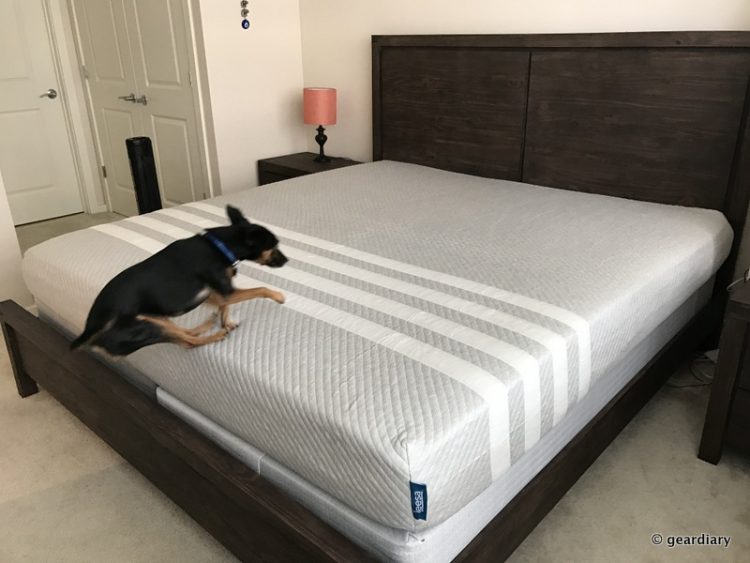 I will say in terms of the first few nights with the Leesa, they take some getting used to. While I am used to a plush feel of a mattress, and even a mattress with springs, the Leesa is my first with neither. The first morning after waking up with the Leesa mattress I was a bit tense in the shoulders due to the firmness of the new mattress. But this isn’t an issue for long. Like any other mattress, it will take some getting used to and as your body adjusted, you will find yourself having some of the best nights of sleep you’ve had in a while.

Jess had an issue with back and shoulder pain throughout the day so she tends to sleep on her stomach. And on my previous mattress there would be random nights that, regardless of the AC being on, there would be some nights that I would sweat and I’m almost certain it was due to the mattress I was sleeping on not being ventilated enough, and just being overall hot against my skin, with or without a shirt on. I weigh 170 pounds, and I knew it wasn’t an issue of weight so I would have to blame it on the mattress. With the Leesa however, this has yet to be the case. 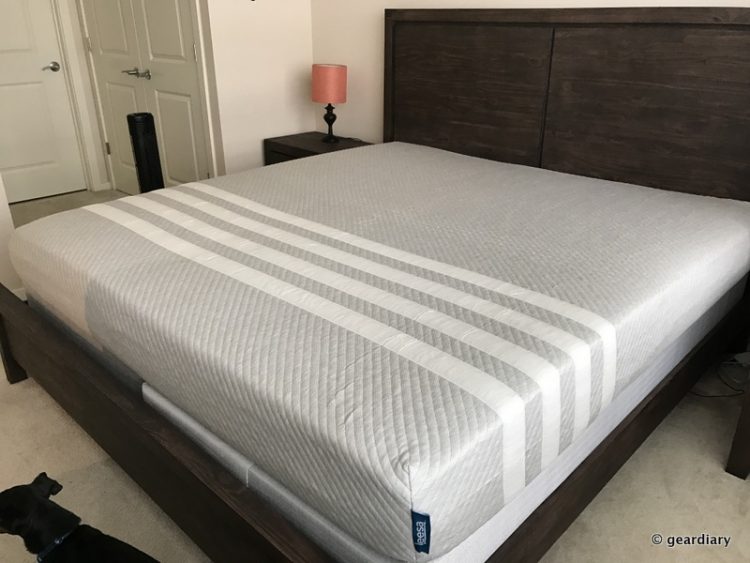 On the scale of 1-10 in terms of firmness, the Leesa is hands down a seven. While this might scare some off, I have to say that the firmness is not a bad thing at all. As an avid side sleeper, I’ve actually begun sleeping on my back on certain nights while watching television in the bedroom all while not waking up to any back pain. So if you’d like relief for your lower and upper back, you are safe in that regard as Leesa’s firmness doesn’t compromise its overall comfort which makes sleeping in any position perfect.

Since the Leesa does have latex built into the mattress, you’d expect a bouncy effect when you maneuver around the bed, and it does respond pretty quick to movement. Whereas if you had a “memory foam” bed, you’d be used to that feeling of sinking into the bed, that’s certainly not the case with the Leesa, and that’s a HUGE deal for someone who doesn’t want to have to “climb” out of their bed. The mattress itself will not give like a spring due to spring mattresses having a bunch of unused space that can eventually become dense or have sinkholes which is something I fear more with mattresses than anything else. You’re taking a gamble online buying sight unseen, but this is certainly an area I think Leesa has covered pretty well. 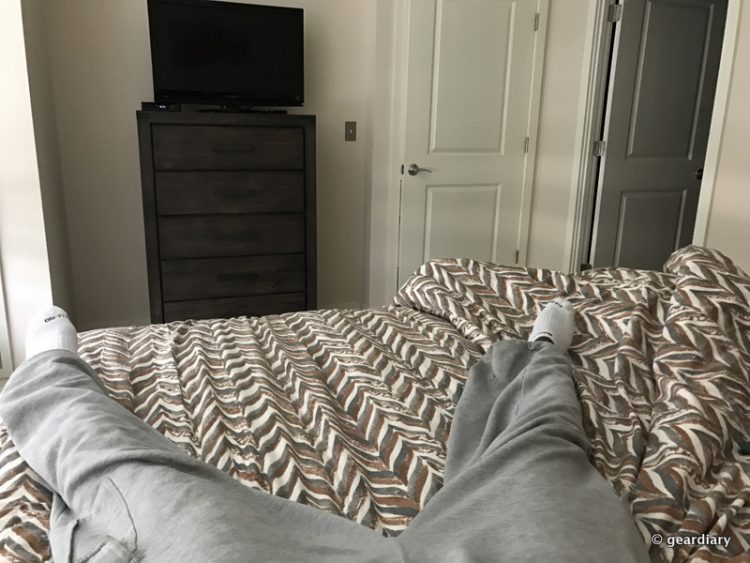 If you are the type who likes to sit in bed while watching tv or reading a book, the fact that you will not sink into the bed is a great deal due to Leesa’s attention to detail to body support. The mattress will conform a bit over time, but if you want that “cloud-like” plushy feeling, Leesa may not be for you.  In doing a standard test of putting all of my weight into the Leesa with my hand,  as well as standing into the center of the mattress, the Leesa gave some, but not much. As only ten inches in depth to stand in, the Leesa doesn’t have a weight requirement by any means, but if you are a bit heavier, this is something to consider if you plan on having the mattress for the next 6-10 years.

Getting on and off of the Leesa mattress is a treat as well. The problem with most spring mattresses is that they soften and cave over time, especially on the edges because other than where your body lays, you tend to get on and off the bed in the same spot at least twice a day. Imagine your desk chair, over time the more you sit in it, it’s begun to make an impression that may or may not be something you’re into.

With a King sized bed, it’s safe to say you don’t have to ever worry about your partner taken over your side of the bed which is a welcome change coming from a queen size. But the biggest difference the Leesa has over the competition is movement. When she gets up in the middle of the night, it goes completely unnoticed, and that’s certainly a good thing.

I’ve read reviews online prior to actually receiving the Leesa myself, and most of them complained about the mattress being TOO firm, but it seems as if it’s here and there and be clear, everyone’s bodies are different so you have to be able to see the forest for the trees in that regard. You can obviously go and purchase a memory foam pad if you want to feel like you’re floating on a cloud, but eventually you’ll find yourself buying another, and then one more after that. The Leesa is someone who likes firm mattresses, is searching for a firm mattress, and not looking for “firm, but I want to feel like I’m being wrapped in my mattress”. I personally enjoy falling asleep and waking up in the same position, and over thirty days, my sleep has gotten better, and Jess’ back pains are all but gone. If you sleep on your stomach, you won’t sink into the mattress and feel discomfort after 6+ hours of sleep.

As far as if the mattress is good enough for sex, I have to say yes. Since the mattress doesn’t give much due to its firmness, there won’t be much bounce, which is good, if you’re into that kind of thing. 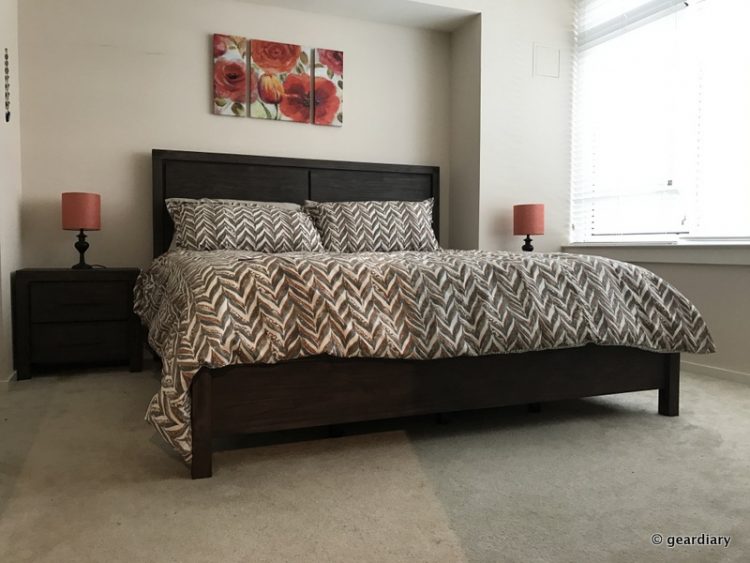 It’s worth mentioning that Leesa’s return policy is top notch. Leesa offers up a 100 day in-home trial period where if you don’t like it, you can contact their support team and they will refund you the full amount of your mattress. And as far as returning, Leesa will actually coordinate with you to donate it at no cost to you. But if you do intend on keeping the Leesa mattress (like I will), Leesa offers up a ten-year full replacement limited warranty (so no pulling off the tags!)

You’d easily be paying between $1400-$2000 at your local mattress store, not including the fact you’ll be paying a delivery fee, so Leesa has the upper hand there. The prices are probably the cheapest you’ll find in regards to online mattresses as well:

Overall I LOVE my Leesa mattress and I feel as though you will as well. Currently Leesa is running a special where you can actually get $75 off of your Leesa mattress which is perfect with the holiday season right around the corner. Regardless of the size bed you choose, it’s safe to say regardless of how you sleep, you will be comfortable, you won’t sweat, and if you can get over the daunting task of (carefully) unboxing it, it’s possibly the best mattress that I have laid on to date.

For more information on the Leesa mattress, you should head over to their site today!

What I Like: Firmness actually made my night’s sleep better; design is pretty jazzy, no night sweats.

What Needs Improvement: The material on the mattress itself is pretty thin