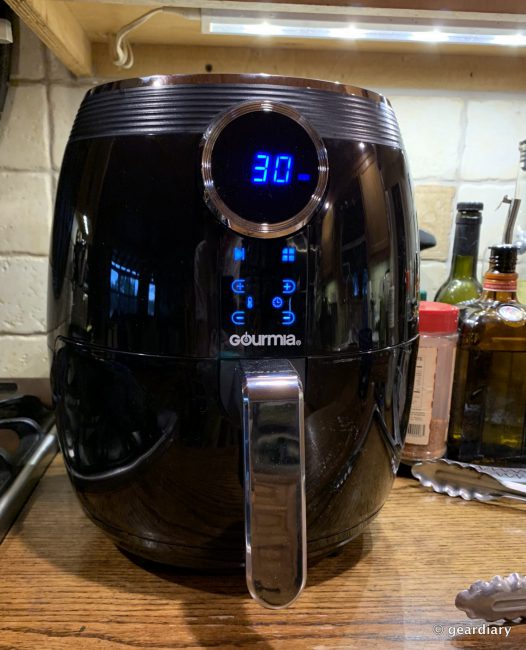 How in the world did I get by without ever owning an air fryer? In my defense, our kitchen space is limited, so we don’t have a lot of room for extra gadgets. But after trying out the Gourmia 5-Quart GAF575 Air Fryer, I’ve found a kitchen appliance I will simply have to find space to keep; it’s that good.

So what can an air fryer do, and why do I think that everyone needs one? Well, based on the name alone, I figured it cooked fried foods without oil, similar to how an air-popper pops popcorn without oil, but that was the extent of thought I put into it.

An air fryer is a kitchen appliance that cooks by circulating hot air around the food using the convection mechanism. A mechanical fan circulates the hot air around the food at high speed, cooking the food and producing a crispy layer via the Maillard effect. Traditional frying methods induce the Maillard effect by completely submerging foods in hot oil. The air fryer works by coating the desired food in a thin layer of oil while circulating air heated up to 200 °C (392 °F) to apply heat and initiate the reaction. By doing this, the appliance is able to fry foods like potato chips, chicken, fish, steak, cheeseburgers, french fries or pastries using 70% to 80% less oil than a traditional deep-fryer. – Wikipedia

It turns out that an air fryer is actually a mini conductive oven; it circulates hot air around the food and by stretching the small amount of oil that you might either spray on the food being cooked or mix into the food being cooked, it allows you to get a similar effect to deep-frying without using so much oil. The whole process is much less messy and definitely less greasy. The result is a healthier, less fatty (greasy) meal. But you can also use an air fryer like a mini oven to make hot sandwiches, cook meats, bake potatoes, and so much more.

The Gourmia 5-Quart Air Fryer measures approximately 13″ tall and 17.5″ deep at its widest point, not counting the front handle which sticks out an additional 3″. Included in the box are the air fryer, a user manual, a card with Gourmia customer service contact information (should you need help), and a “no oil frying cookbook”.

The air fryer is made of shiny black plastic with shiny silver-colored plastic accents. As far as kitchen appliances go, it’s not unattractive or overly large so if you want to keep it on your counter (assuming you have space) it isn’t going to look odd.

The silver circle rings around a display window that will show the temperature and time set. Underneath the display screen on the panel leading to the handle, there are buttons to start or pause the cooker, raise or lower the temperature, raise or lower the timer, and a food preset icon choice that can move between eight settings: french fries, bacon, fish, shellfish, poultry, pizza, cake, and steak. 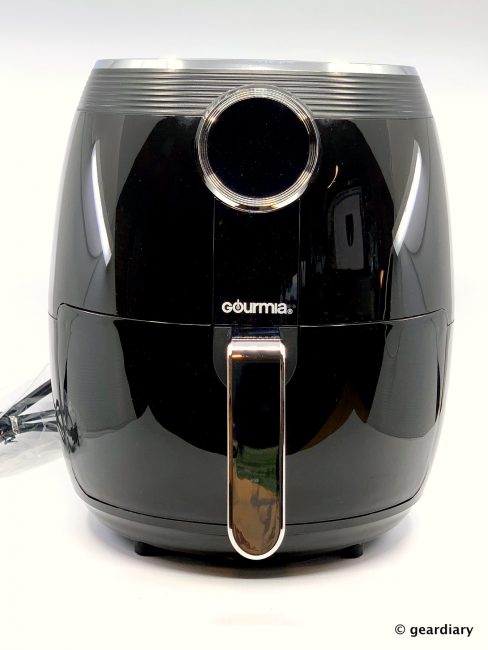 Here’s the back side; it has a vent and the power plug. 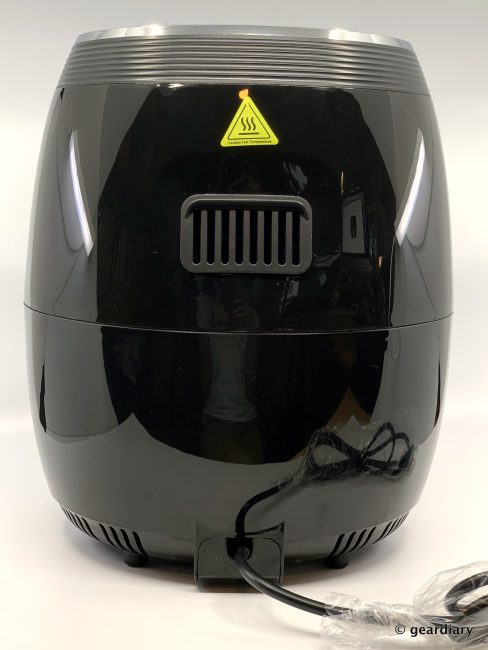 On the bottom of the front, there is a large slot that the cooking drawer slides in and out of. 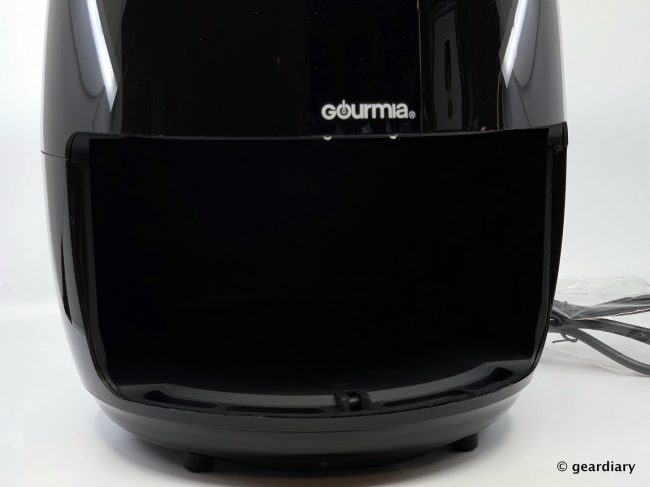 There are two ways that you can use the cooking chamber — as a 5-quart “pot” or with the included metal cooking tray which allows you to cook larger foods in layers. 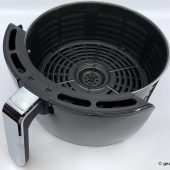 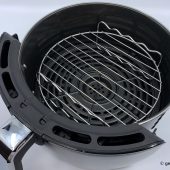 While there are quite a few tasty-looking recipes in the included cookbook, I needed to make dinner the other night with limited supplies, so I ventured onto Google and found that there are a ton of amazing air fryer recipes (like these) out there for those of us who aren’t yet quite sure what they are doing or what an air fryer is capable of handling. 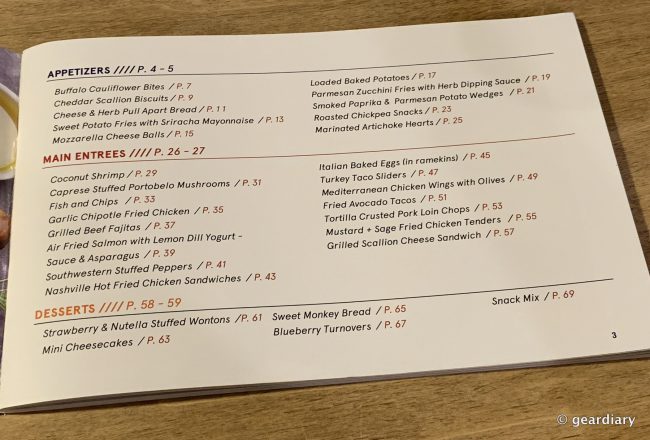 I had five boneless and skinless chicken thighs that I thought would be good to experiment with. Since I simply wanted to “fry” them, I found this recipe online and used it. I took advantage of the metal rack so that I could stack all five pieces of chicken. 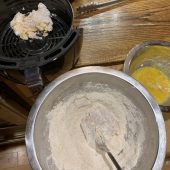 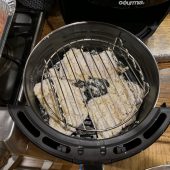 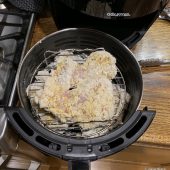 I set the temperature to 390º for 30 minutes, but rather than setting the temperature and walking away, about every 8 minutes or so, I’d open the air fryer and use a set of tongs I had on hand to flip the chicken or to move it to a different spot if pieces appeared to be cooking at different rates. I wound up adding an extra 5 minutes to the cook time because I wanted to be sure that I cooked the chicken fully, but I think I may have overdone it a little bit. Hey, it was my frist time! 😉 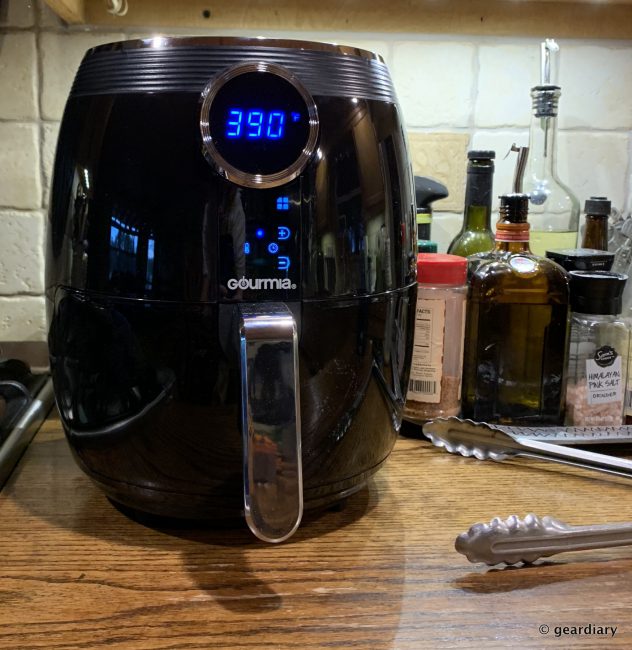 Here’s an actual photo of what was going on inside the Gourmia air fryer. 😉 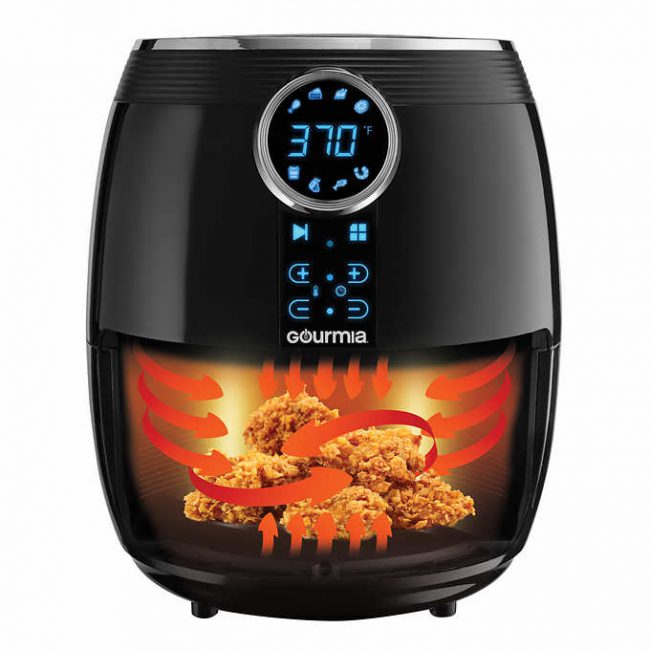 Here’s my result! I probably cooked the chicken a little too long, but it was fully done, crispy, and it had a nice crust. Kev’s suggestion to make some southern-style cream crazy to go on top was the perfect solution. 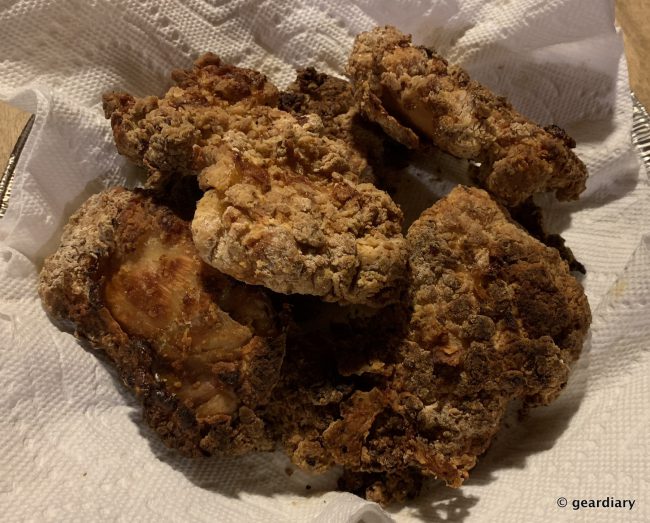 Since I knew I was also going to use the air fryer to make our side dish, I set the chicken in the oven on 200º to stay warm while I tackled the next project.

Usually, when making brussels sprouts hash, I’ll also add sliced jalapenos, thin strips of bacon, and a cup or so of panko crumbs, but I was running short on supplies at the time. Instead, I sliced a medium onion into strips, removed the brussels sprouts stems, and then cut them into quarters. I tossed all of the sliced veggies in a bowl with a tablespoon of olive oil, salt, and pepper, and then I dumped the mixture in the basket without the rack. Roughly following the directions I found here, I set the temperature to 360º and set the timer to 20 minutes. Every 5-6 minutes, I’d open the drawer and stir the hash around a bit so it could cook evenly. 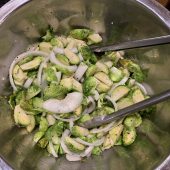 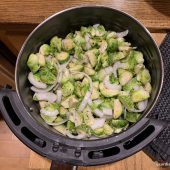 The result was simply amazing. Next time, I’m adding the thin bacon slices, jalapeno pepper strips, and a little bit of panko — because why not? 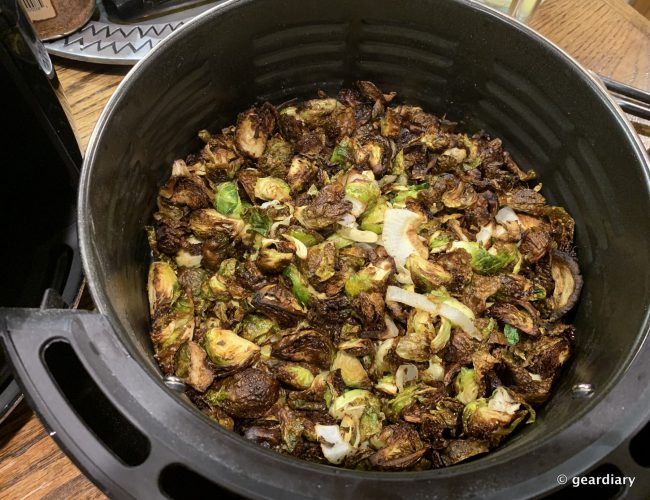 Here’s dinner complete with the cream gravy. It was really good! 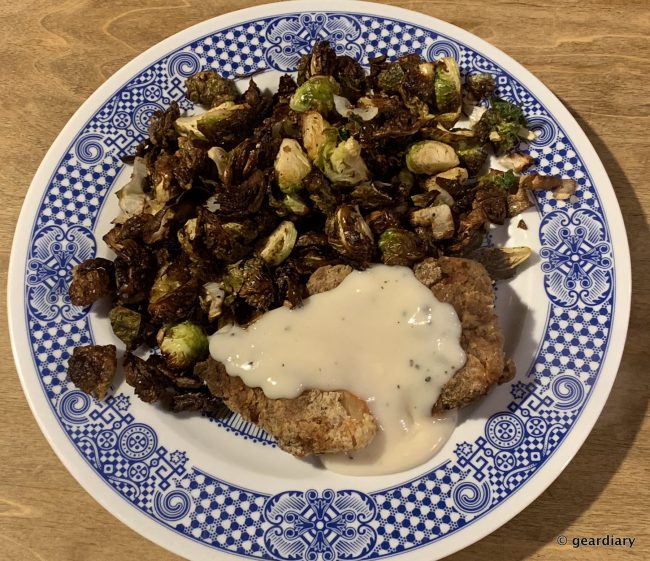 Air fryers can also be used to refresh leftovers that aren’t crispy anymore, which is great for reviving french fries, egg rolls, or any other foods that don’t usually hold up well as leftovers. Using the air fryer doesn’t heat up your whole kitchen (or fill it with greasy odors), and it’s so simple to clean after cooking. Not having to constantly deal with fry spatter and the overhead fan makes the air fryer even more of a joy to use, but the resulting texture of the food “fried” inside is what sold me. I’m one of those people who will buy frozen french fries to cook at home, but instead of frying them, I bake them. While the result is edible (and healthier), it’s not as crispy and “fried” tasting as I’d like. Now I have a solution to that problem.

Air fryers are convenient and easy to use — the Gourmia 5-Quart GAF575 Air Fryer also happens to be very affordable.

Do you have an air fryer? If so, let me know in the comments how you like to use it and what your favorite recipes are; I’m ready to try making a lot more things in mine!

What I Like: Fried food without the cooking oil mess; Easy to operate; Easy to clean; Food made is delicious and crispy; There are tons of air fryer recipes available on the web