Honey, I shrunk the Acadia. Those were my exact thoughts when I first saw the redesigned 2017 Acadia three-row family crossover from GMC. And I kept thinking that when I learned it was powered by a four-cylinder engine. Can this new model fill the shoes of its previous generation? 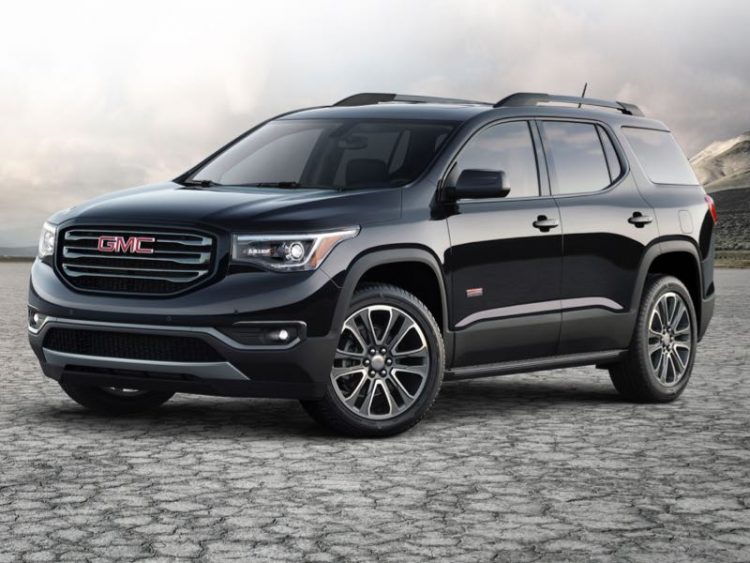 Yes…and no. Gone is some 700 pounds that designers and engineers shaved off the outgoing Acadia when arriving at the 2017 model, but also gone (in the base model) is two engine cylinders and cargo space at the rear. While the new Acadia’s fuel economy has risen I still do not wish to give up engine displacement when I may be hauling up to six or passengers. Why can’t automakers give us turbocharged fours in these family haulers? To be totally fair, though, GMC does offer a V-6 in the Acadia still. More on engines later.

The styling of the new Acadia does show us the new face of GMC and there are still three rows of seating available in the 2017. Seating configurations can be 2-3-2 or, as in our tester, 2-2-2 – an arrangement preferred by this reviewer and, more importantly, his wife (grandmother of three – no, four – no, how many grandkids are there now?). She does not necessarily like the third-row seats that bring the rear glass close to the heads of those rear seat occupants – and the 2017 Acadia is now one of those. 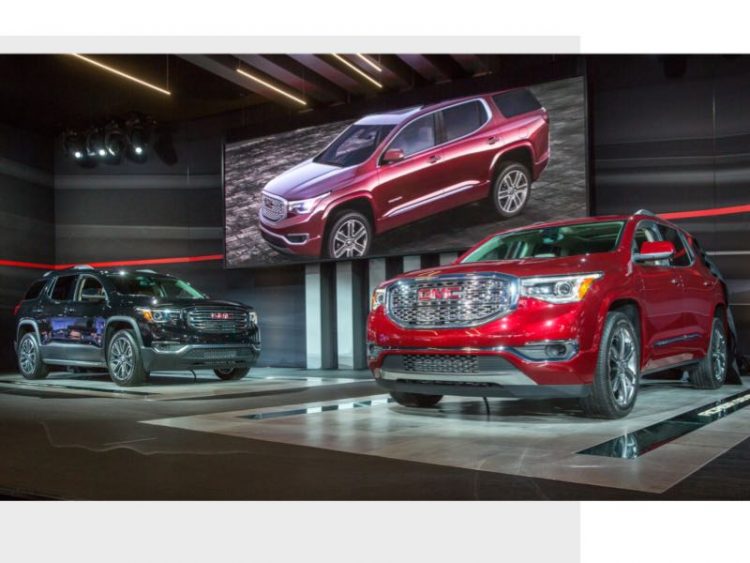 The 2017 Acadia is described as a contemporary crossover designed for families on the go. Bodylines are clean and somewhat sleeker, further separating it from the bulky Yukon frame-based sport ute and further splitting the showroom. Overall, the new Acadia is shorter and narrower, therefore making it more maneuverable. It feels lighter driving down the road while still offering very good balance and stance. On acceleration, there is a bit of grunt from the smaller engine as one would expect. And with only two adults and minimal cargo the base engine does provide adequate power and acceleration – not to mention the wonderful surprise of better-than-rated fuel economy on the highway.

The new base engine for the 2017 Acadia is a 2.5-liter inline four-cylinder with direct injection. It produces 193hp and 188 lb. ft. of torque and is mated to the Hydra-Matic 6T50 six-speed automatic transmission. The new Acadia is offered in front- or all-wheel drive and rides on choice of 18- or 20-inch wheels and tires. The EPA fuel economy rating for our FWD tester in SLT-1 trim was 21 mpg city and 26 mpg highway. During our testing we achieved 28 mpg on the highway and we were not trying to win any green driving awards. The V-6 engine available is 3.6-liters, rated at 310hp, and can still manage to tow up to 4,000 lbs. 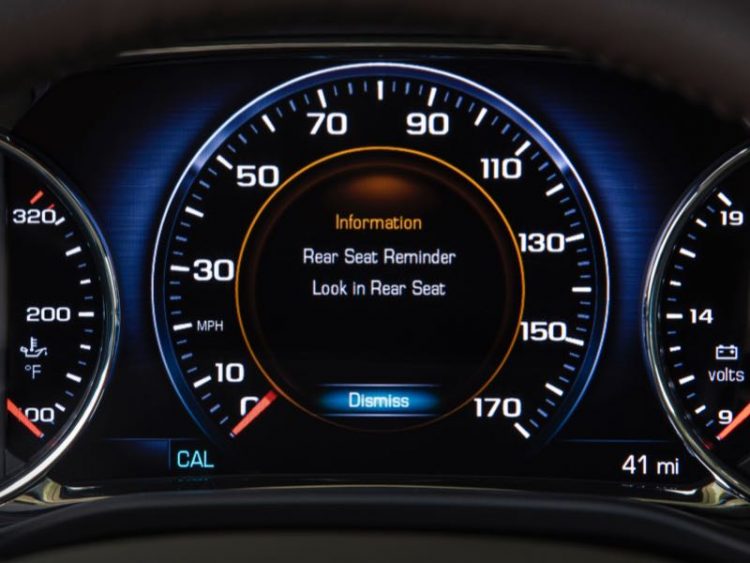 There is a host of new technology in the new Acadia, perhaps foremost is the rear seat reminder, which alerted me to the possibility of the grandkids being in the back seat numerous times. The vehicle senses when access is made to the rear of the Acadia prior to one driving evolution. When the engine is shut off there is an audible and visual alert to remind the driver to check the rear of the vehicle for occupants. Also new this model year is front pedestrian braking, low-speed automatic braking, forward automatic braking, following distance indicator, Intellibeam automatic high-beam control, surround vision camera system, safety alert seat, forward collision alert, lane keep assist with lane departure warning, lane change alert with side blind zone alert, and front and rear parking assist. 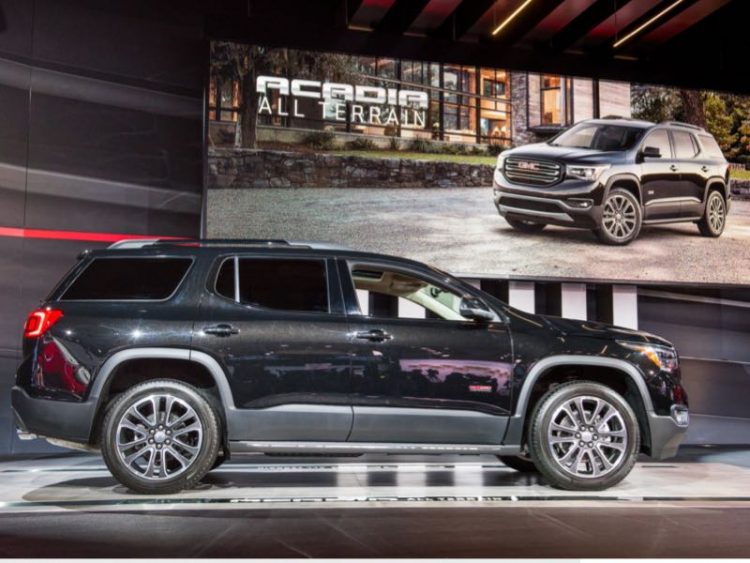 Interior design has been updated as well and like the outgoing model there is ample leg- and headroom with the second-row seats featuring fore/aft sliding allowing for more space for those relegated to that third row. And while I would not wish to ride back there for very long, the third row will accommodate average-sized adults. With both second and third-row seating folded flat, Acadia offers 79 cubic feet of overall cargo space. There is a storage bin at the rear of the front center console where kids can store toys, etc. and all rows of seating offer USB charge ports for electronic devices. 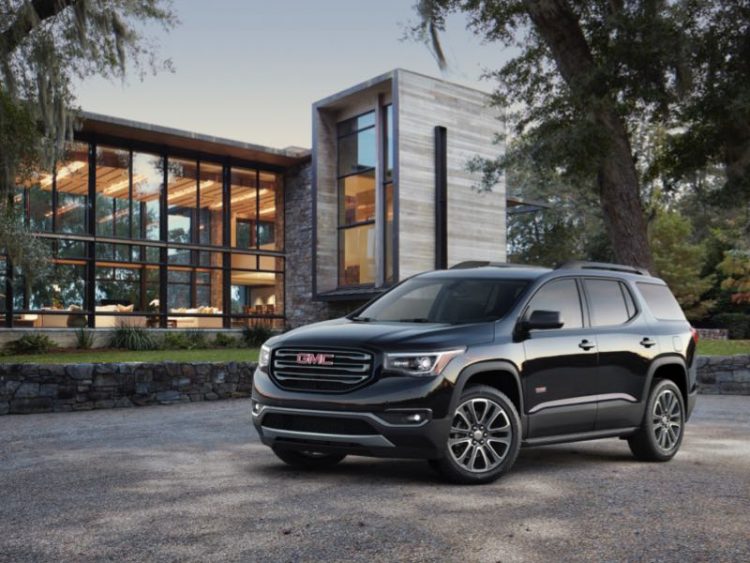 All of GM’s latest infotainment technology is available in the 2017 Acadia including Teen Driver Report Card as well as 4G LTE WiFi hotspot and 8-inch color touchscreen with navigation and Intellilink featuring Apple CarPlay and Android Auto capability. 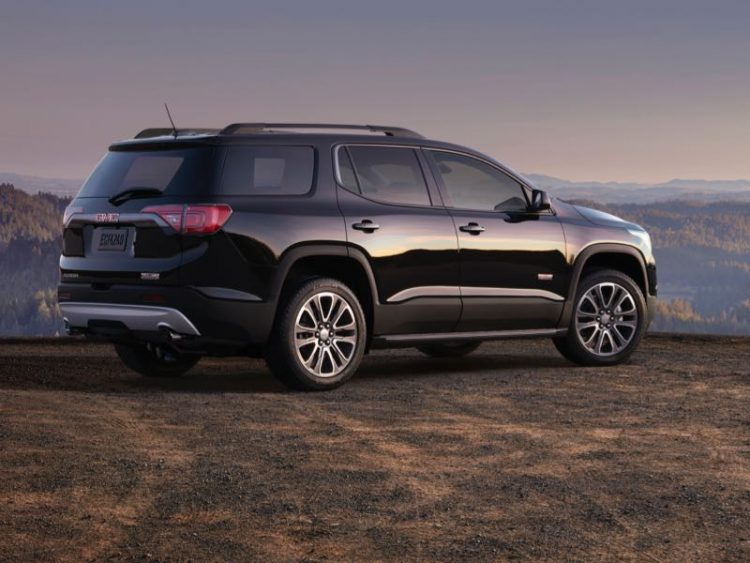 I had my misgivings when I first climbed behind the wheel of the 2017 GMC Acadia as I had no problems with the previous generation whatsoever. The downsizing places the new Acadia more in the middle between Terrain and Yukon now, so Acadia will stop cannibalizing sales from the mighty sport ute. And truth be told, this new Acadia is probably better for the masses especially in terms of maneuverability. It is very comfortable and as we found, the little four-banger is quite capable while also delivering better gas mileage. This is the new Acadia, whether we like it or not (and yes, we do like it).